Professional Motorcycle Racers Association (PMRA) ran its first race of 2020—and its first under new director Shannon Mendenhall—this past Saturday, June 27, at hot and windy Tulsa Raceway in Oklahoma.

And right at the hit, Shane “Showboat” Eperjesi set the internet on fire with a PMRA record 6.34 at 215.48 miles per hour on Robert Valera’s Pro Open bike, tuned by Dan “The Man” Wagner.

“The track was pretty good that first pass,” said Eperjesi. After that, trying to tame the hot track and wild winds was the big chore for Eperjesi and crew. “The wind was horrible and we should have moved it to eighth mile, ‘cause down track was some freaky stuff!” 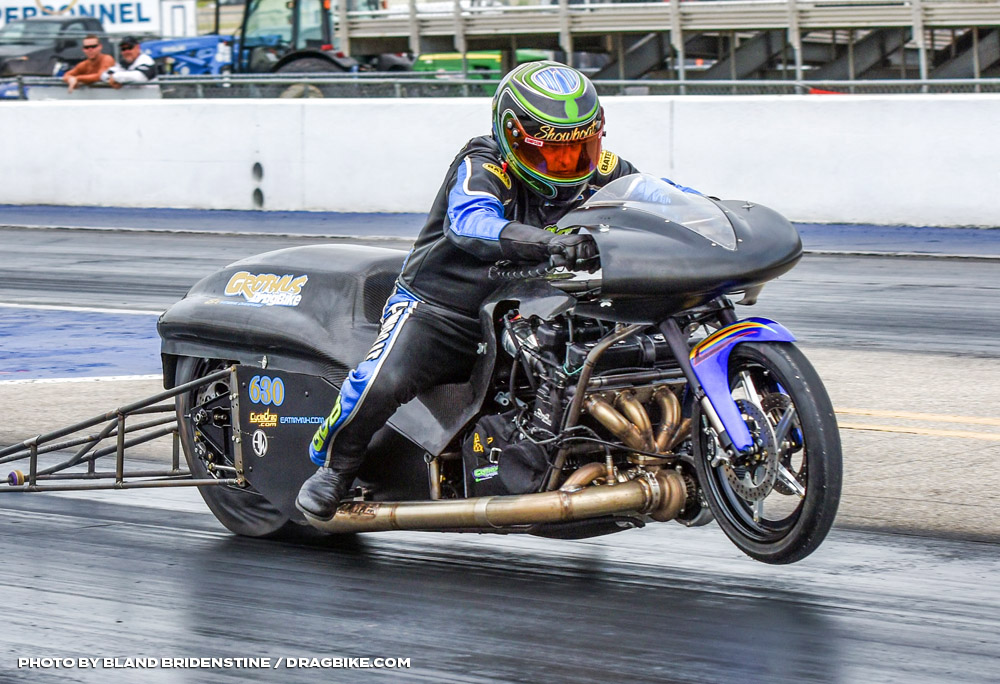 Shane practically apologized for not going quicker and faster. He and fellow finalist Rob Garcia decided to save their equipment and settle the final on a handshake, with Eperjesi taking the beam for the win.

“I was being a good teammate and allowed Shane to go up to break the beams, since he will be running the points series there and I do not have those plans,” said Garcia.

It was the second outing ever for the Varela bike, and the first with Mitch Brown’s Monster head on top. “We ran a Vortex head in Valdosta, but Robert wanted to try the Monster so he built another motor,” said Eperjesi. “It’s stupid fast!”

Martin Miller beat up on his old man Jim in an all-Miller Super Gas final. Defending class champ Jim took the tree but was .009 quicker to the stripe in the double breakout race. 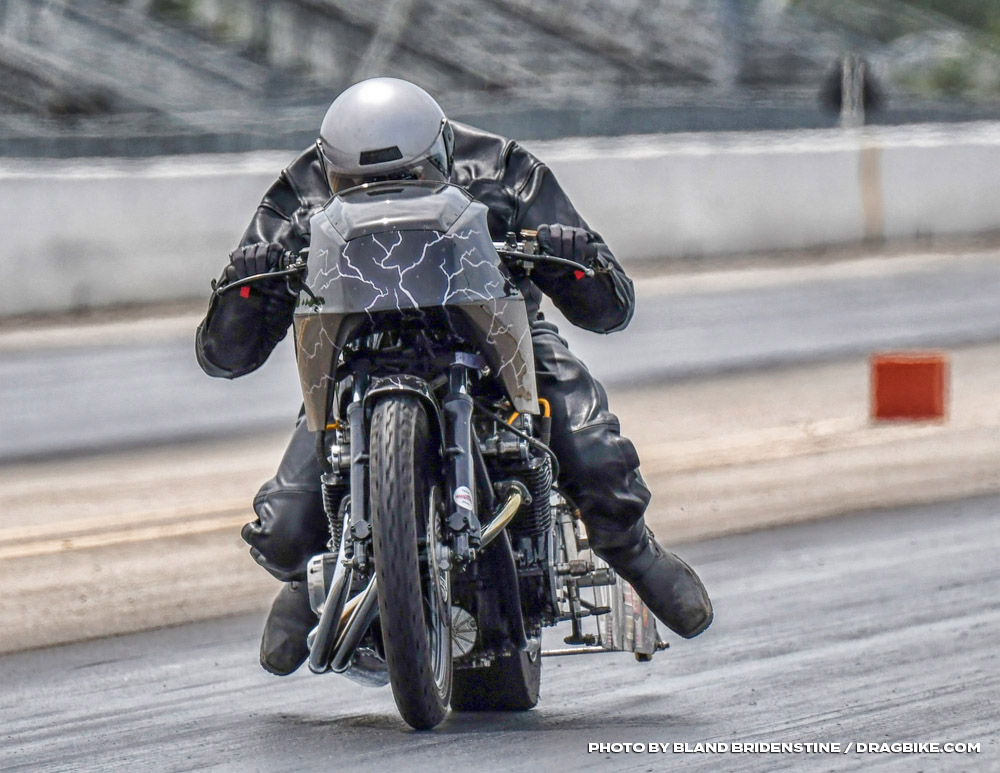 Afterwards, Martin had quite a story to tell. “Two years ago I decided I wanted to be a dirt bike racer and went out on a Saturday morning against a lot of people’s word who told me I shouldn’t—like my mom, my dad, and my wife,” said Martin. “I ended up crashing, breaking my leg in five places, and having surgery

“Prior to this I had been saving up money to buy the dragbike that I now ride: ‘Bad Company.’ I had made the first deposit to my dad. He was the middleman, pulling the ropes to get the bike to our family again. Him and his brother Kevin built it in 2005 and won multiple PMRA races and four championships.

“I ended up having to take the money back from my dad to keep up with bills while I was off of work and lost my chance at getting the bike.

“I had to change a lot off the track and a lot about my young life, and lose my teenager punk attitude to change my life on the racetrack. And I believe I did that, so God rewarded me the motorcycle I wanted in the beginning

“I have now won my first championship after 12 years of racing, and I’m leading the points in PMRA and in the Summit Series right now. I know it’s early in the year, but I stay competitive to keep my mindset

“But I’m also humble. Winning this past weekend against my father meant more than words or pictures could ever tell, but what most of those people back at the starting line couldn’t see is my dad out-running my butt. He took the finish line by 0.009 too fast and still had half a wheel on me. Anyone that can judge that kind of distance at that rate of speed is a pro.

“I owe everything to my parents who stuck by me when I was in the wrong. They also molded me into what I am today.

“I also owe a bit of gratitude for my life both on and off the race track to Chris Wedman. He’s like that uncle that’s a second dad. He sees the good in you but won’t hesitate to slap you straight when you start to slip up. I can talk about Chris Wedman and all the good he’s done for a lot of people, but that would be another article itself.” 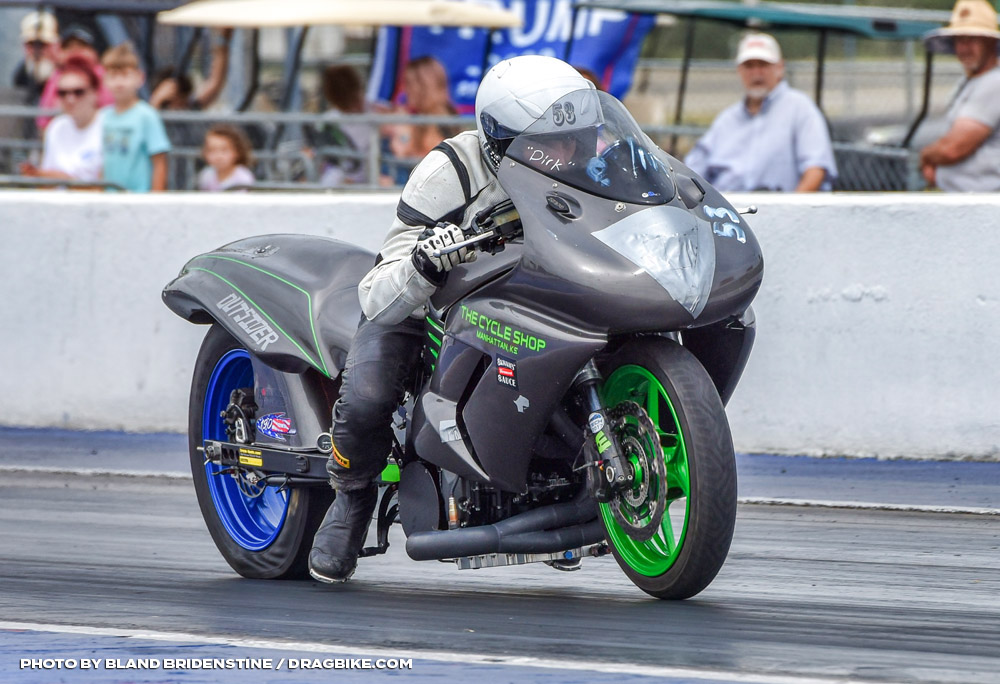 David Ellenbecker overcame some first-race-of-the-season jitters aboard his gangsta Kawasaki ZX14 to take out Kermit Lottie in the Outlaw Grudge final.

“The start of the 2020 season has been chaos!” said Ellenbecker. “The team has endured tremendous amounts of stress, hours of work, and several weeks without a full night’s sleep. But this weekend we got to reap some of the fruit of our labor. We secured our first heads-up win of the season and our first PMRA win. We’ve been long overdue and this one feels damn good.

“I can’t thank everyone enough for all that they do. None of this is remotely possible without a team behind you. Wil Marquardt particularly has sacrificed an awful lot for this portion of our program in the belief that a few punk kids in a 2-car garage can do something extraordinary.

“Also a big ‘Thank You’ to our sponsor Ag & Drag machine shop. Dan put a lot of hours into the bike these last few weeks. Thanks to Robinson Industries and Rob Bush for helping us get the parts we needed to rebuild and the awesome turnaround time. It couldn’t have been done without them.” 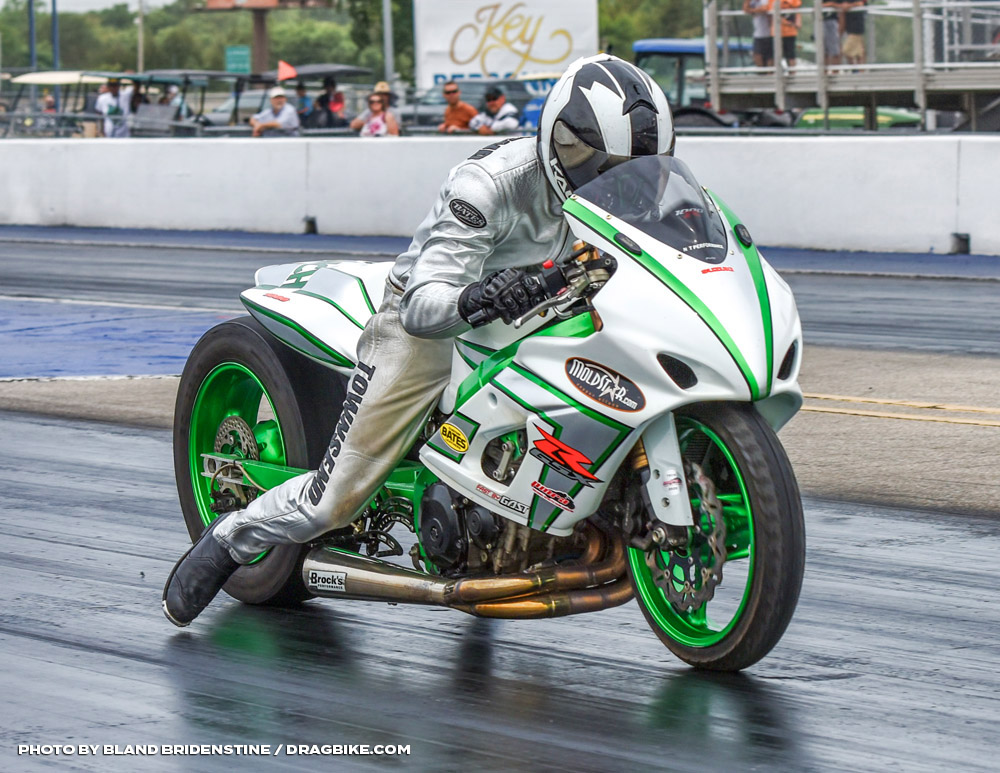 “Got up real early at 5:00 am to make the trip up to Tulsa,” said Townsend. “Got there, got ready for open trials, and took the ‘Grinch’ green 8.90 super comp bike up for the first run and ran 8.85 outta the trailer, and parked it till first round.”

Townsend qualified fourth with an 8.964. Number one qualifier Mike Hudson failed to make the call against Townsend in round 2 on Lucas’ march to the win.

Top Gas was an all-Townsend final, as Lucas faced his cousin Chad. “We decided to split the money before we ran, so I made up my mind I just wanted to run him to the finish no matter what.” 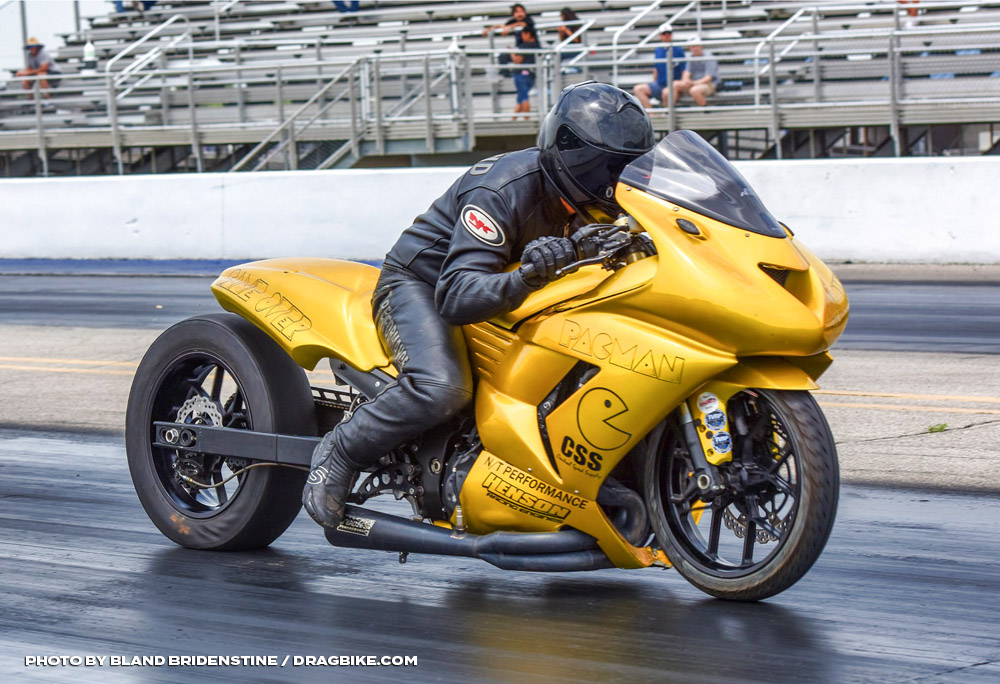 “All in all, a great day of racing. The bikes were dead on the number.

“Thanks to Tulsa Raceway Park and PMRA for having us a place to race. Can’t wait to go back!” 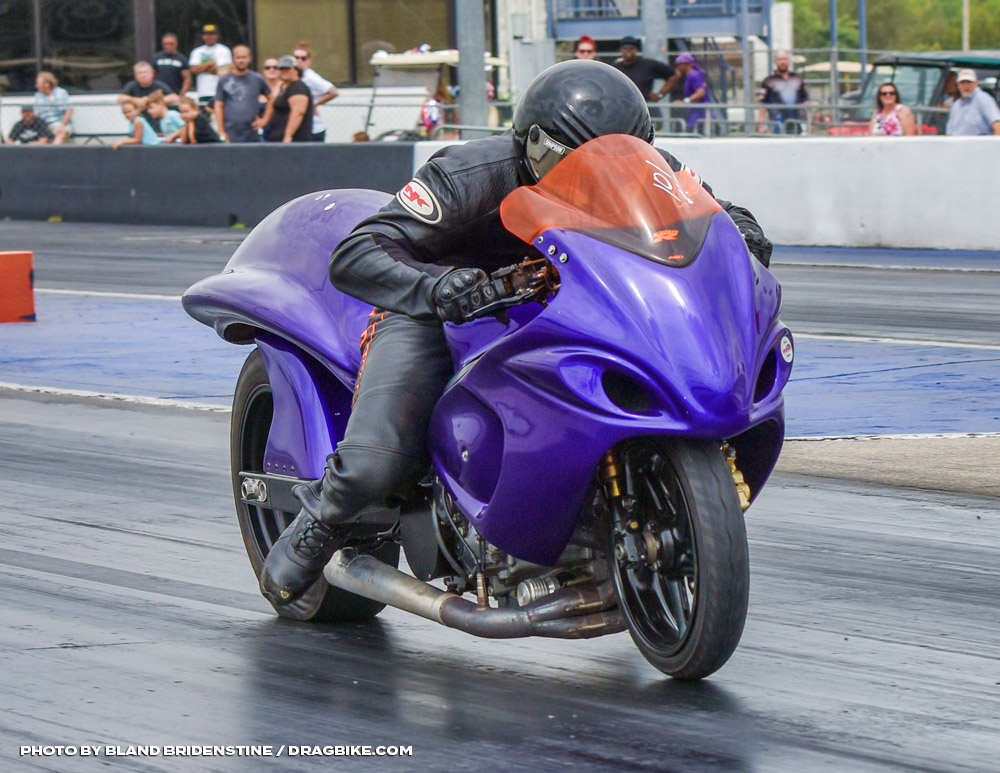 “Potato Salad Racing’s” Louis Brown took Heavy Hitter Grudge on his purple ‘Suzuki Hayabusa, with Mac McKnight the runner-up. “We’ve been going to Carolina, working a bunch with Billy Vose, and somehow we ended up getting one of his bikes he had jus put together,” said Brown. “It’s been a dream come true! Kinda crazy, he tuned my bike all the way from Darlington on Saturday and it ran like a bracket bike all day.” 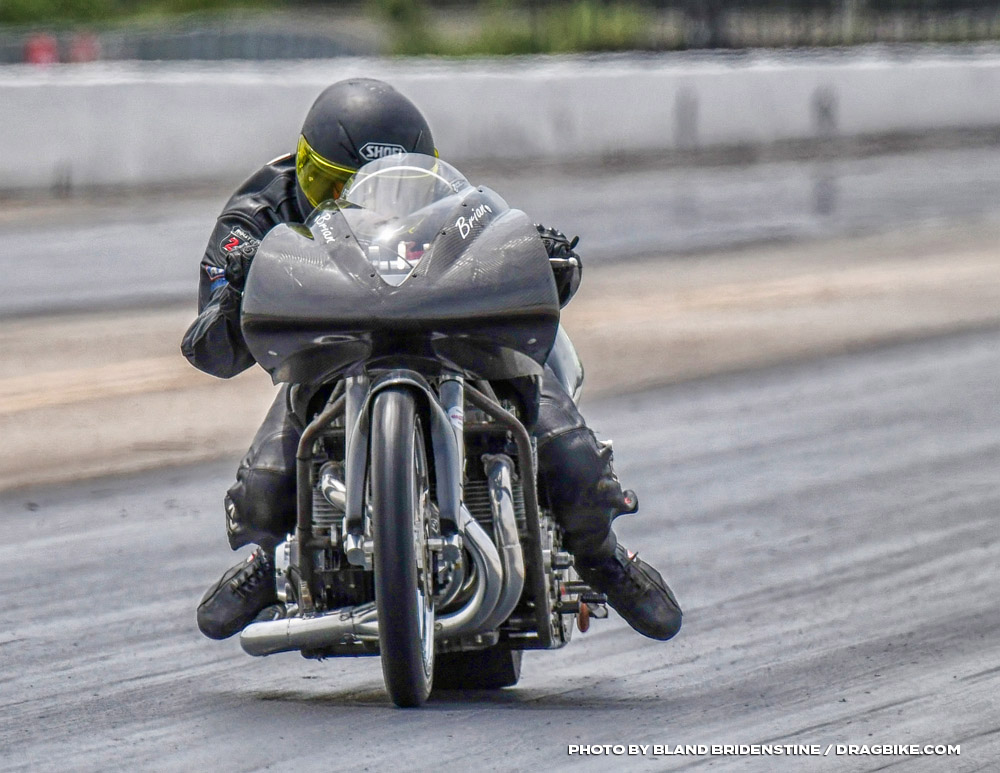 In actual bracket racing, Brian Wood’s .013 light pushed Division 4 champ Ricky Kay (.048) to breakout in the Pro ET final. “It was a warm one by the time the afternoon rolled around,” said Wood. “Had alright time trials and found my stride come eliminations. Won first round and earned the buy second round, and raced my way to the finals where I faced Ricky. He missed the light and I was 13 and pushed him out the back door.”

Tim “Nuke” Robbins put .070 on Aaron Vaughan at the tree and kept the gap on his GSXR for the win in the Street ET final. 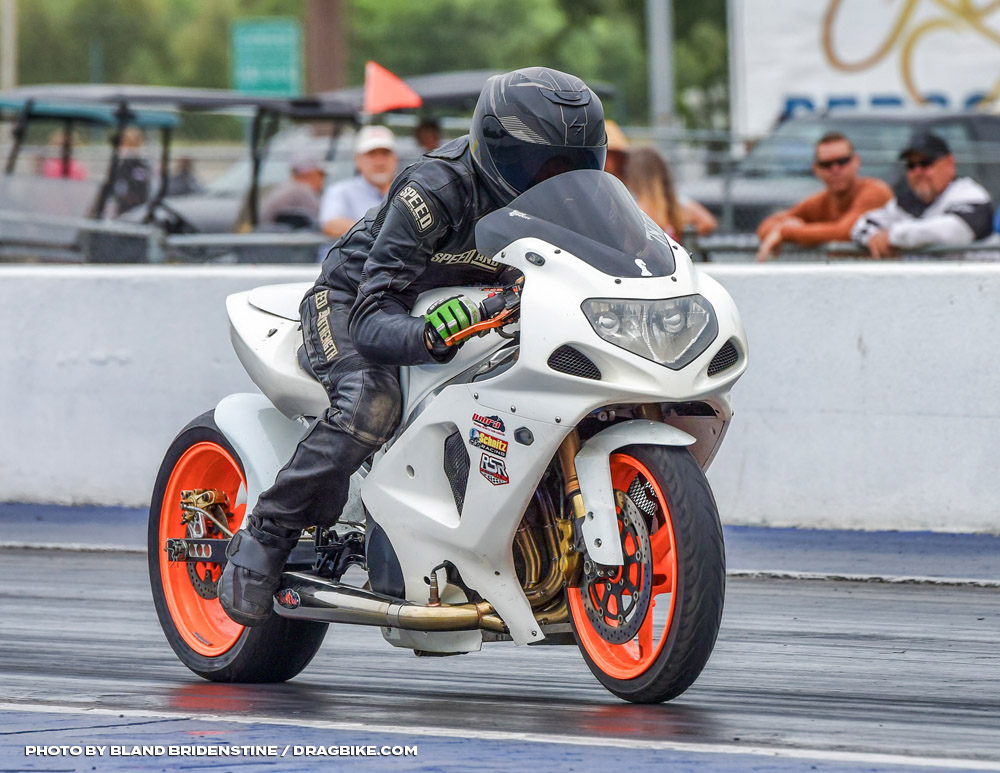 “First time back racing in a while and it was exactly as I remembered—hot and a mad rush a few times to make the round!” said Robbins. “But I managed to walk away with the win.

“I gotta thank Shannon Mendenhall and Cycle World PowerSports for picking up the reigns of the PMRA. There wasn’t much time for them to prepare for the event but still pulled it off and made it a great time. Next one should be smoother and I know we’re all looking forward to what the future of organization is going to look like with them in control!” 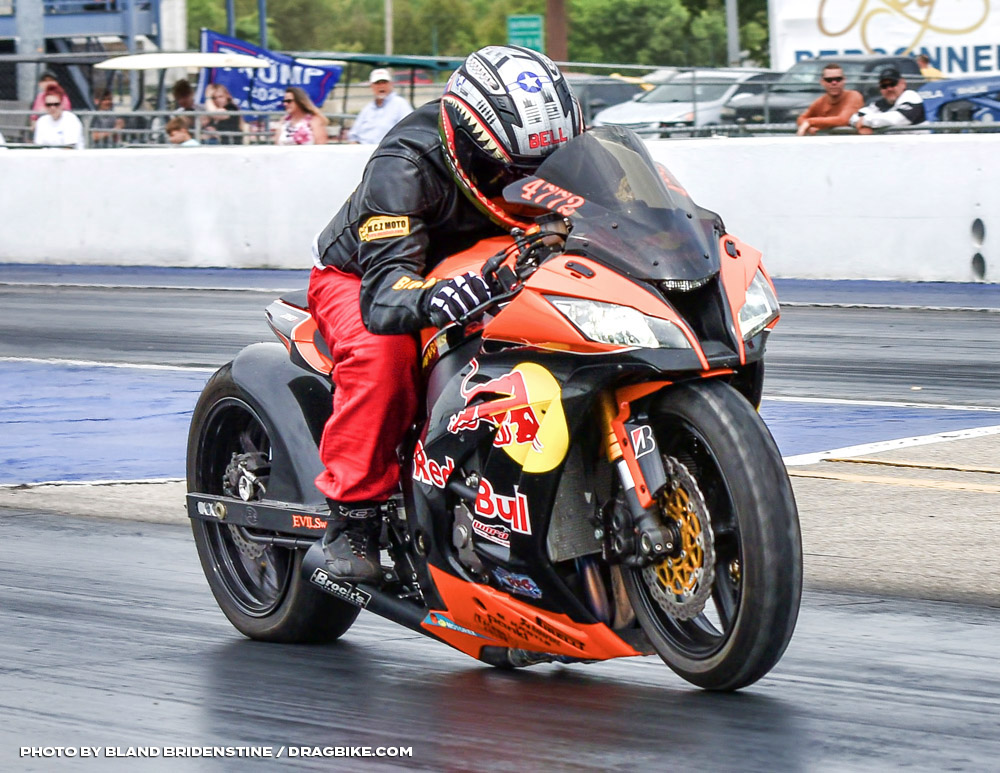 The Pro Stagger 5.60/6.0 final saw both Josh Pilcher and Tony Taylor working the 6.0 index. Pilcher had an .040 advantage at the tree and kept closer to the index on his Kawasaki ZX10 for the win. 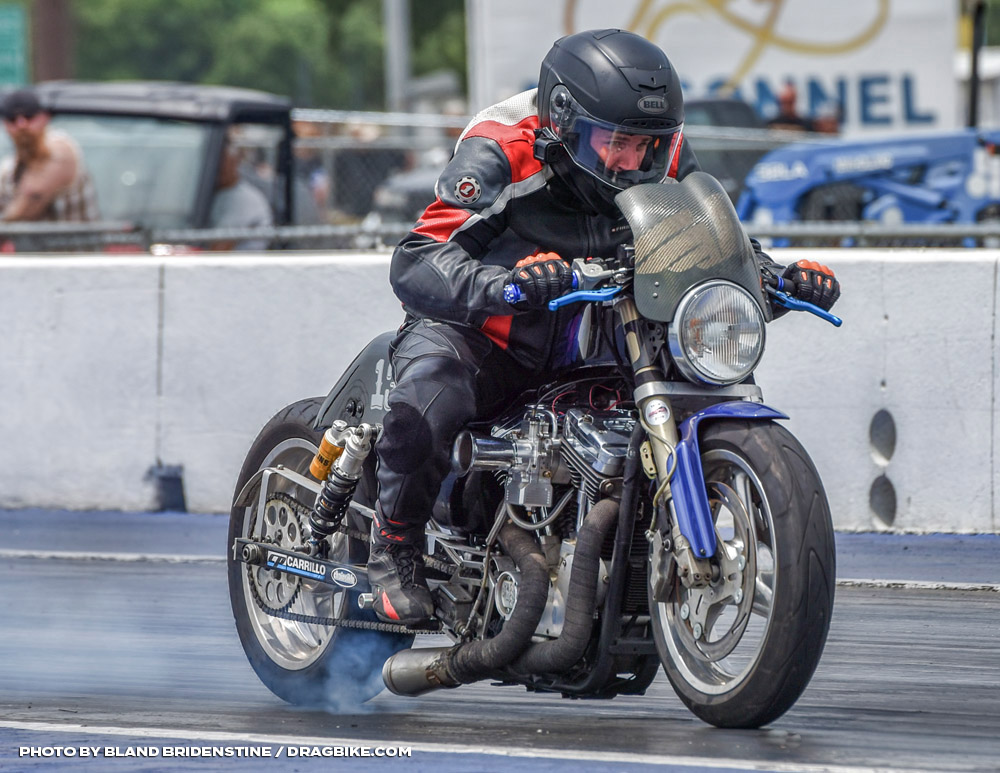 Neither Dean Shayna nor John Powers had lights to brag about in the V-Twin final—Shayna with a .236 and Powers with a .330. Both also obliterated their dial-ins, with Shayna taking the double breakout win. 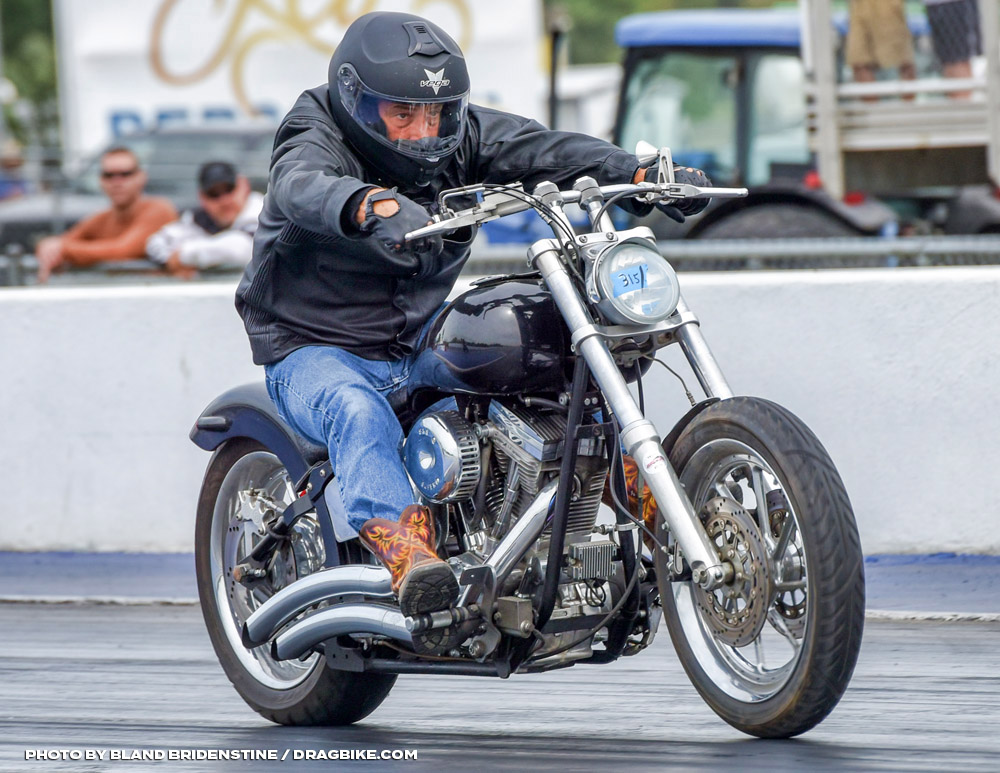 At the end of the day it was a great debut for the “new” PMRA, and director Mendenhall has some great momentum to carry into the next event—August 14-15 back at Tulsa Raceway Park, with test and tune on Friday, qualifying and eliminations on Saturday.

This report was prepared by Tim Hailey, with photos by Bland Bridenstine.

For more information on PMRA visit them on Facebook at Facebook.com/PMRA/