Upon arrival at Castrol Raceway Friday, July 20th, Ethan and his team were greeted by plenty of rain, lightning and thunder. Not a great way to start a race weekend while the forecast for the rest of the weekend wasn’t looking great with showers expected throughout the area. 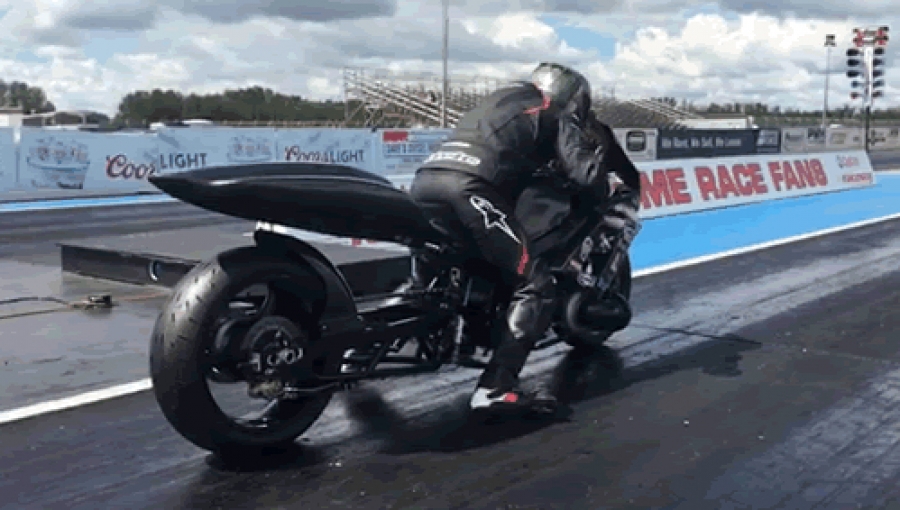 Saturday morning started off as usual, get on track early and make a test pass to get a feel for the track using a moderate tune-up. Once Ethan let the clutch go the bike moved about 5 feet and then the rear lost grip. The track was really slippery due to all the precipitation over the past 24 hours and it would be a challenge to find a way down the track without spinning. The first two rounds of qualifying were more of the same, spinning in the same place right after the start. In the final round of qualifying, Ethan had taken enough power out to make it down the track without too much drama, 7.68/182 mph. A decent run that would put him in #2 only seven-hundredths of a second behind EB Speed supported rider Dan Green on his turbocharged Hayabusa.

Sunday morning’s weather wasn’t good at all consisting of gusty headwinds, cool temperatures and to top it off rain in the forecasted for the afternoon. That being said the track was actually in better condition than Saturday and the call was made to see if they could go quicker. It was the right decision and the elapsed time and trap speed reflected it, 7.64 / 190 mph! Finally Ethan and his team were making progress as his turbocharged GSX-R1000 “Eleanor” was showing potential for more but they had to be very careful not to overpower the track.

In the first round of eliminations, Ethan lined up against long-time rival Rob Aston who was aboard his newly acquired turbocharged Hayabusa. As the lights flashed green Ethan was gone like a shot, gaining a healthy lead over Rob with great reaction time and continued to open up a wider margin as they accelerated. Ethan had substantial tire spin-in 2nd gear and peddled the throttle then short shifted to third gear. The rear tire abruptly regained traction and lofted the front wheel at over 150 mph! He kept the throttle wide open and clicked into the next two gears crossing the finish line first with a 7.62 at 183 mph to take the win. Unfortunately, that’s all the racing that would happen as a large thunderstorm rolled over the track at 4 pm, ending the day. Ethan would have had a bye run in the semi-final giving him a clear path to the finals. “The bike was starting to work well and the times were coming down, I’m really disappointed we didn’t get a shot at the win today” Ethan stated after the call was made to end the event.

Ethan is now in a virtual tie for the lead in the High-Level Motor Products Pro Street Series. The next stop on the schedule will be Aug. 11-12 at Northern Lights Raceway in Fort St. John B.C.