Ethan had to remain focused on performing well at the final event of the season if he wanted to take home the #1 plate. Leaving nothing to chance a complete teardown of his turbocharged GSX-R1000 “Eleanor” was completed prior to arriving at Mission Raceway Park for the 2016 CMDRA Finals. Always one to watch the scales, Ethan was also sporting the yet to be publically released ultra-lightweight HJC RPHA11 Pro Riberte helmet for the finals courtesy of Parts Canada. Things got off to a soggy start as constant drizzle Saturday morning kept the event in a holding pattern. By 11 am the clouds parted and the track staff worked for a few hours to get the surface prepared for the opening test session and subsequent qualifying passes in the early afternoon. 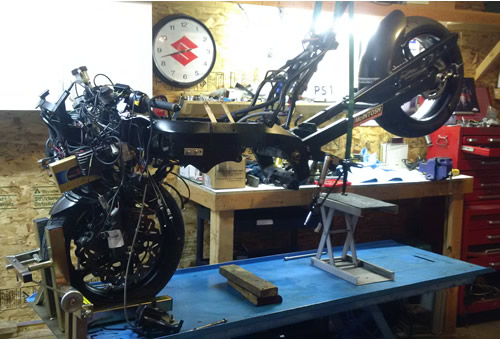 “Eleanor” received a complete makeover only days before the final race!

Ethan wasn’t too happy with the way the track looked for the opening pass; the constant rain in the days leading up to the event began to lift the existing rubber from the track. With that said he had no choice but to go for it if he wanted to get that #1 plate. So he put a relatively strong tune in the bike in hopes of making a clean pass. Even with all the work the staff had done, there wasn’t nearly enough grip and the rear wheel spun instantly when Ethan let go of the clutch lever. Since the rain put the entire schedule behind, the test session was cut very short and that would be the only pass Ethan would get before qualifying. Going into qualifying totally blind isn’t ideal so Ethan elected to try something more conservative in hopes of making it down the track and gaining some useful data. The first pass was good but not good enough as he ran about two tenths off pace with a 7.83, not the number the team was looking for. In round two it all came together and the bike left the line smoothly and the modest tune up kept the tire planted and the scoreboards flashed 7.43 / 188. In the final round of qualifying the heat of the day was gone and track cooled significantly and there was very little grip left and the bike spun right at the starting line. At the end of the day Ethan qualified in the number #1 position and gained a few valuable championship points. 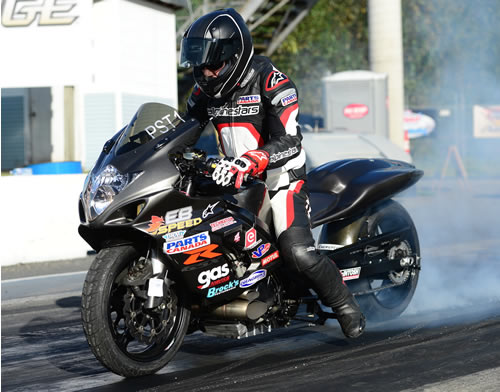 Getting the rear tire warmed up prior to making a pass!

After a long night of wrenching on the bike, Ethan was poised to get down the track and make a decent showing for the final event of the season. Morning rain had once again delayed the start and subsequently shortened the test session, so the team would only get one pass. With a modest tune up Ethan left the start line cleanly but the bike spun the tire on the 1-2 shift, killing the elapsed time. Heading into eliminations the goal was to make a clean passes under modest power. The times were not good but things were going in the right direction and mid 7’s were within reach. Ethan found himself In the finals he lined up against Rob Aston who had been in the upper 7.4’s on and off throughout the weekend so Ethan couldn’t go with too soft of a tune or he would watch Rob pull away. 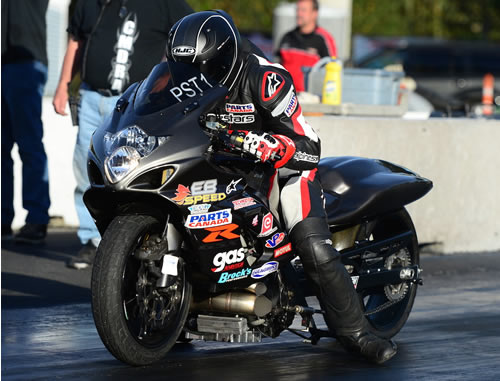 Eleanor’s chassis transferring the weight to the rear tire!

Ethan gambled to add a bit more power for the final in hopes of posting a low 7. As Ethan left the line the front tire lifted a couple inches off the surface thus transferring all 570 lb’s of bike a rider on the rear tire. Even with the chassis working perfectly the rear lost grip just a few feet into the run, Ethan worked the throttle instantly in an attempt to get the rear hooked up again and managed a great recovery of 7.67 / 187 but lost to Rob’s 7.45 /186. 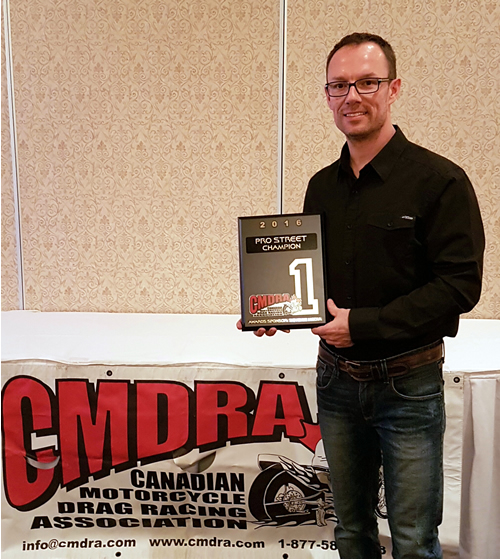 Ethan takes home the #1 for an unprecedented 16th Time!

It wasn’t the way Ethan wanted to end the season, but overall 2016 was very successful. A host of personal bests as well as three event wins, two runner-up finishes in five races. Combine that with two national elapsed time records including the amazing 7.24 second run from Edmonton. All of this added up to Ethan winning his 16th CMDRA Championship! 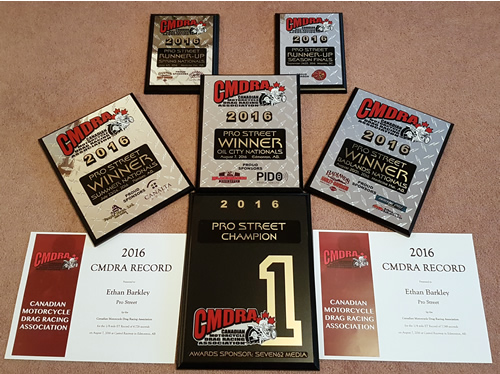 The results of a highly successful 2016 CMDRA Season!

Behind every rider is a group of supporters who help make it all happen. Ethan would like to thank his 2016 sponsors for all their support; Parts Canada, Techmation Electric and Controls Ltd. and Gas Analytical Systems Ltd.