After securing his first No. 1 qualifier award in slightly more than two years, Lucas Oil Racing TV Buell rider Hector Arana Jr. had big plans for hoisting the trophy of the 36th annual Lucas Oil NHRA Nationals late Sunday afternoon. But a fading motor ended his day in the quarterfinal round, a result that didn’t sit well with the fourth-ranked rider in the world. 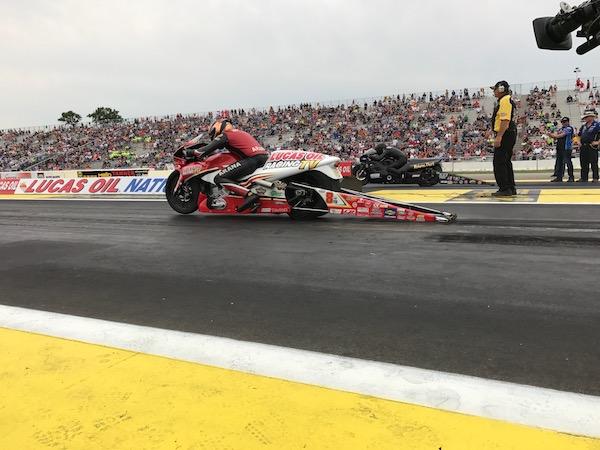 “Our bike was running great on Friday but for whatever reason, she kind of went downhill from there,” Arana said. “We ran the same motor all weekend. It was one of two new motors we brought here and it showed itself really well early on. Now we’ll have to take it apart and see why it started going south on us.

“We didn’t drop off a cliff, performance-wise, but it really started dragging between the 60-foot and 330-foot timers, which is where you do most of your accelerating. When you look at the data you can see it’s down in that area. We’ll just have to get home and go through everything and try to figure out why.” 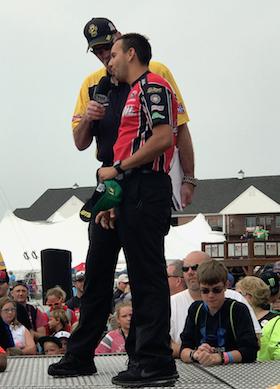 The most prolific rider in the history of Pro Stock Motorcycle, Andrew Hines, was next, but on this day it was Arana who was the clear favorite, enjoying the advantage of lane choice thanks to his quicker speed in the opening round. Unfortunately, Arana’s motor gremlins showed up and slowed him enough to give Hines a miniscule win, 6.918 at 195.31 mph to Arana’s 6.919 at 194.24 mph.

“We’ve got a weekend off before Indy so we’ll have time to go through the motor and the bike itself,” Arana said. “Indy is the biggest race of the year and it’s the last one before the playoffs start so it’s another big one on the schedule.

“I’ve talked to my dad (fellow racer Hector Arana Sr.) and Jim (Yates, crew chief) and I think we’re going to go and test if we have time. This has been a big year for us and when the points reset for the Countdown to the Championship, we’re going to be in a great position to really make a good run at the world title. We need to be 100-percent ready.”