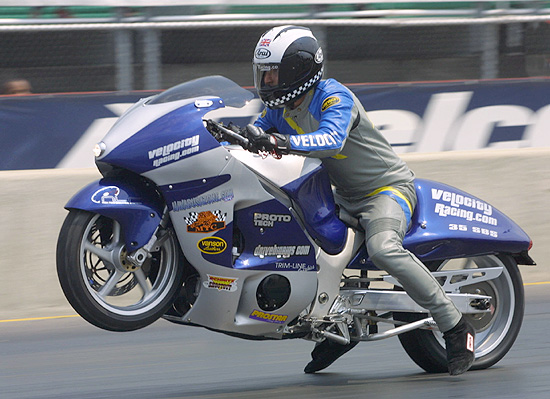 Early in the season owner/rider Henson captured the MPH record for the Hayabusa at 188.3 mph in Atlanta, GA. Then at the Prostar Pingel Thunder Nationals in Indianapolis he cracked into the seven second zone with a 7.96 elapsed time at 179 mph, making it “The World’s Quickest and Fastest Hayabusa.” Velocity then followed up the record setting performance with a win at The Rock the following weekend with a best performance of 8.05 at 177mph. 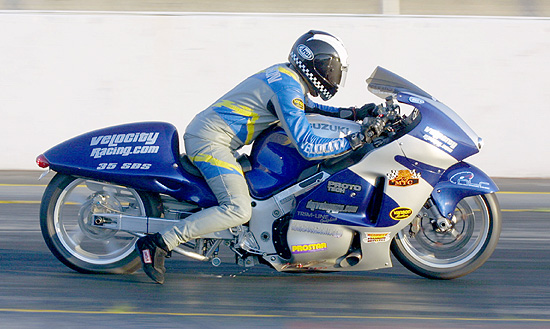 Getting the bike to run these times was not an easy task. After Atlanta Henson thought long and hard about the bike and decided to make a few changes. The biggest change included swapping frames to go from a raked frame to a non-raked frame. The intention was to get the rear tire farther back to allow better weight transfer for a harder launch. With the new chassis set-up the bike slowed down at first but showed potential. After a lot a laps and invaluable seat time, the team had ample opportunity to make the small adjustments needed to the suspension and the the clutch. 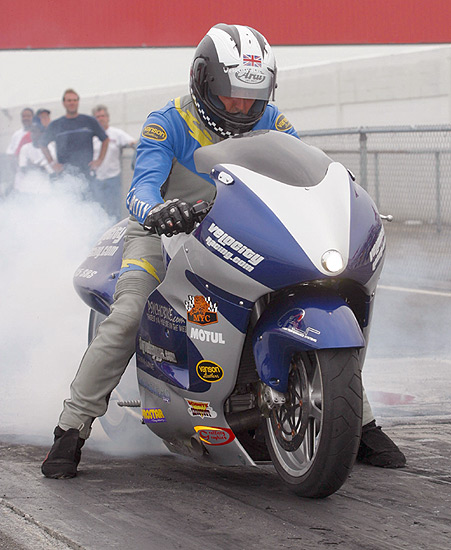 All they needed was time as Team Velocity eventually worked the bike to the 7-second zone. 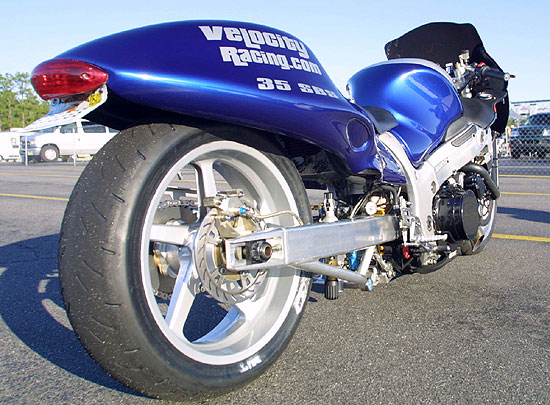 The 2000 Hayabusa originally was built as a personal street bike by Barry, who has been on two wheels since he could walk. His first competitive experience was on the roadracing scene but with his interest in turbocharging, drag racing became his passion. 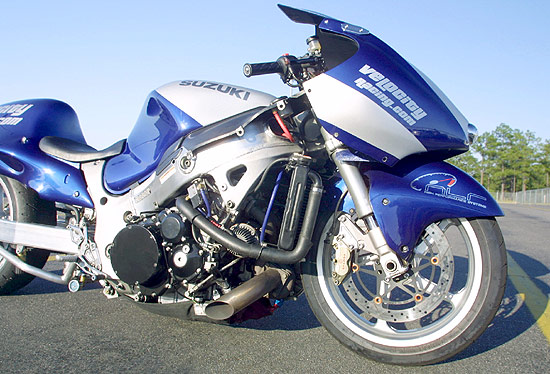 Henson has been attending the AMA/Prostar Indy event for the last five years as a spectator and with this new turbo Hayabusa combined with his love for the sport he decided to enter the Street Bike Shootout class in 2001. It was his “test weekend” and he didn’t lay down any fast times. At the time the bike was only about 5″ over stock wheelbase, had no air shifter, and only had two stages of boost. Even though he was not able to compete with the top runners he had the realization that Shootout racing was something he definitely wanted to do. The transformation began. 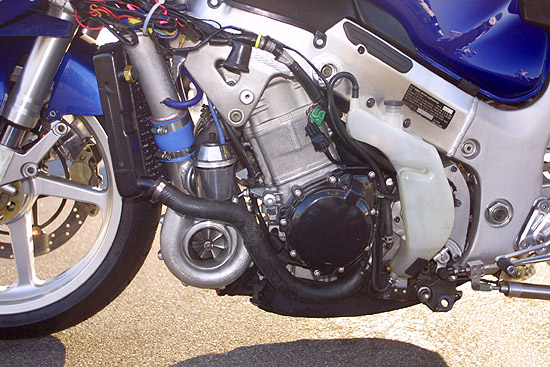 Transforming the basic street bike to a shootout bike was thought to be easy… they had to think again. Adding a low profile oil pan to get the bike extremely low, the crew at Velocity Racing then had to custom fabricate a swing arm pivot. Now with the bike being at its lowest point the tail section had to be slightly modified to keep the tire from ripping the tail light off. Many other mods were done to the bike along the way including moving the battery to the front of the bike to get as much weight up front as possible to assist in keeping the front tire on the ground. The engine has stock bore but packed with high performance internal parts. MTC Turbo pistons attached to a set of Falicon rods to ensure reliability when the boost comes pouring in. With the boost on and pumping out 400+ hp the transmission needed to be undercut with a heavy duty output shaft installed to handle to brute power. 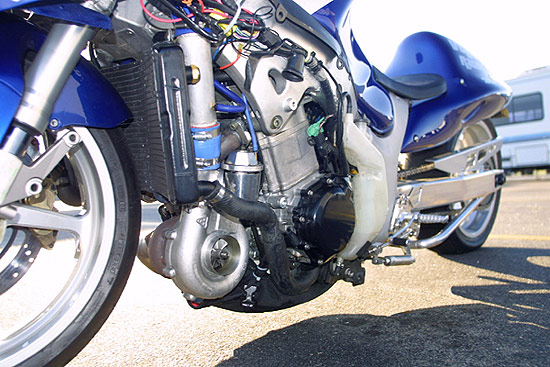 Henson has had a tremendous rookie year doing something nobody thought they could do. Barry was originally laughed at when he stated he was going to run in SBS his first year. With that in mind he set out to prove a few people wrong. Knowing and proving that the bike is a 7 second bike, gave Henson not only confidence but respect among his peers. With more seat time and racing experience, Henson will no doubt be a serious competitor in Streetbike Shootout. 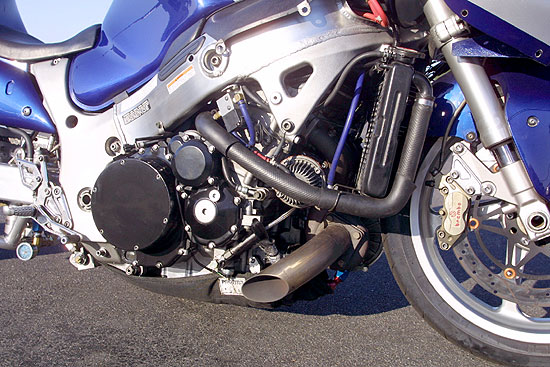 All the time, effort, and changes throughout the season really paid off during a test and tune session Friday night before the Orient Express U.S. Nationals in Atco, NJ where Henson drove the bike to a 7.88 e.t. at 182 mph – the best performance ever for a Hayabusa in the SBS class. 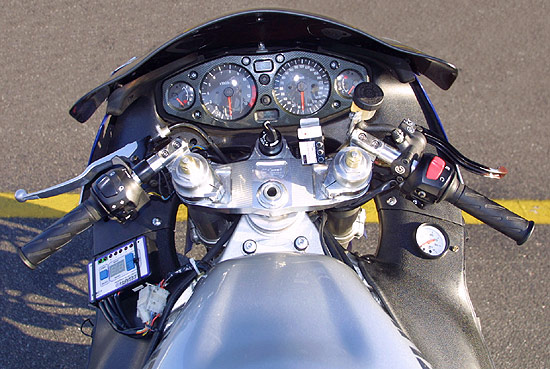 Velocity Racing manufactures their own turbo systems and has a full blown service shop equipped with a state of the art Dynojet dyno. Velocity Racing is located just west of Ft. Lauderdale, Florida where they have a full line of parts, accessories, and riding apparel. They also manufacture and distribute turbo kits for Hayabusa’s, GSX-R 1000’s, and currently developing a kit for the new ZX-12’s. These turbo systems can be purchased from Velocity Racing (866) 417-7333. 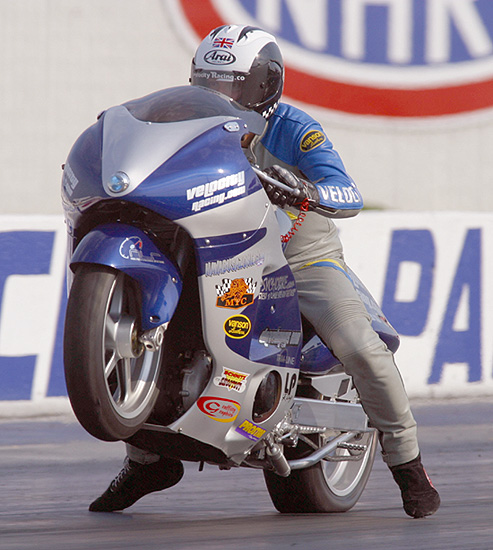 Velocity Racing would like to give thanks to Joel, Nathan, Stephanie, Sean, Troy for all their hard work throughout this season. 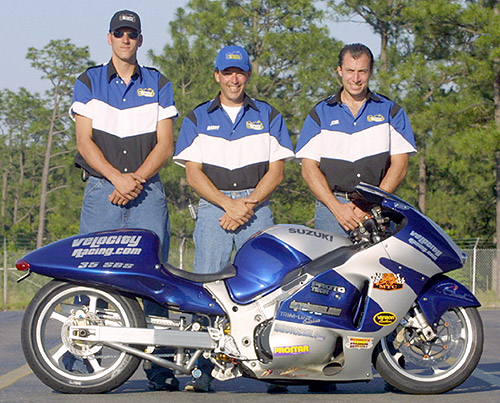