FIM-E Championship 2016 : Round 1 Report from the Main Event

The Main Event –  Round One

The three round FIM-E European drag racing championship opened up with The Main Event at Santa Pod Raceway. The venerable facility is celebrating its fiftieth year of operation is probably in finer fettle than it has been in its five decades as the leading venue in European drag racing whilst retaining a lot of its old school atmosphere. One of the off track (indeed up in the sky) highlights was the first appearance of the RAF Red Arrows overhead for the first time since the 1980s, although the low cloud base (that ironically lifted shortly after the squadron of Hawks had departed over the horizon) prevented a full display of aerobatic excellence, and the rest of 2016 promises a notable season ahead, not least come September when the European tour returns to Santa Pod for the FIM-E Finals.

A very healthy entry of eleven bikes were aiming for the eight spots in the raceday field, but almost from the off the story of the class looked like it would be a tale of two with Ian King in imperious form onboard the Gulf Oil/Grand Prix Originals Puma, ripping off a 5.9508/239.85 to open his 2016 season before improving his career ET to a 5.8172/233.77 to head the qualifying sheets by a bunch. 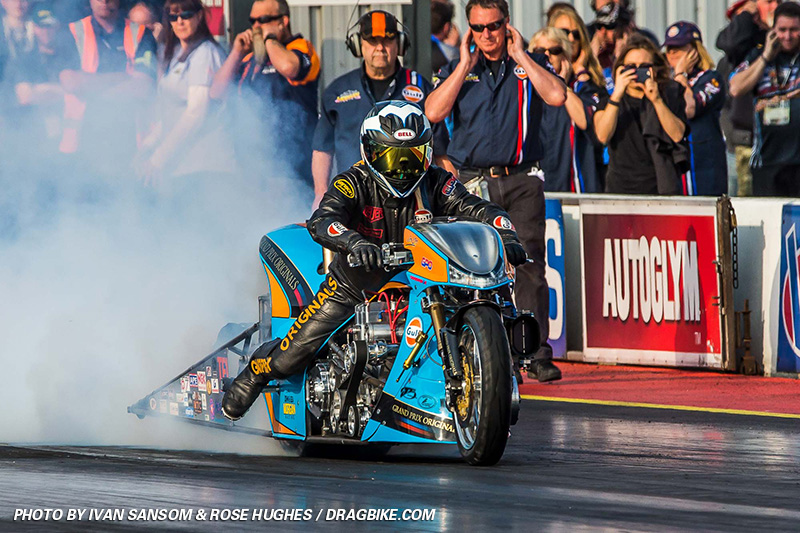 In second spot at 6.4420/202.45 was class veteran Steve Woollatt whilst in third (at 6.4763 with a slow 177.84 terminal) was the other class story of the event with Rikard Gustafsson debuting his nitro fuelled Puma in competition after a fabulous run over the years on his world beating Funnybike bike.

Low ET of the opening round of eliminations went to Gustafsson with superb (and early shutoff) 6.042/212.92 to defeat Stuart Crane, whilst King shed a chain (damage to the sprockets from a repeatedly stretching chain being the main issue for the team over the course of the event) on a 6.459 win over Glenn Borg. 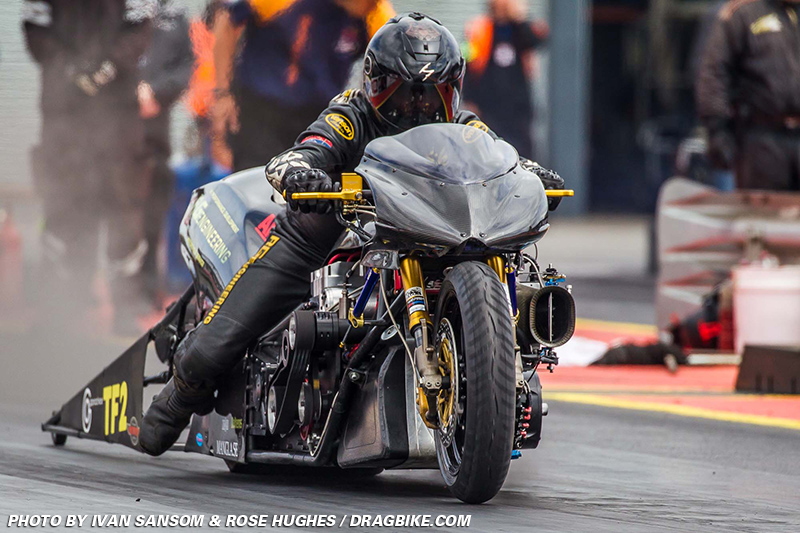 In the semis, King was back in the fives with a 5.904/228.93 when opponent Fil Papafilippou failed to stage and Gustafsson defeated Woollatt in a troubled 8.5 to 12.2 second match-up, both hitting shake with Rikard being the only one to stab the throttle a couple of times to light the win light. 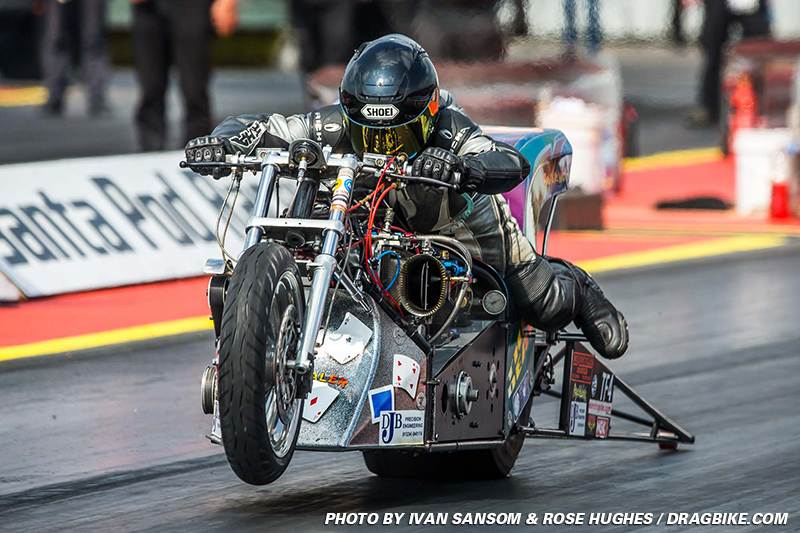 The transmission problems that reared their head in the final four stopped Gustafsson in the final, possibly robbing us from a first side by side five second bike race in Europe, but King’s solo didn’t disappoint with a 5.893/239.95 that should reset the European speed record.

Although a short field, it was not without significance to see the return of two familiar faces from the Nordic countries to the FIM-E Super Twin mix in the shape of past champion Samu Kemppainen and class stalwart Hans Olav Olstad. 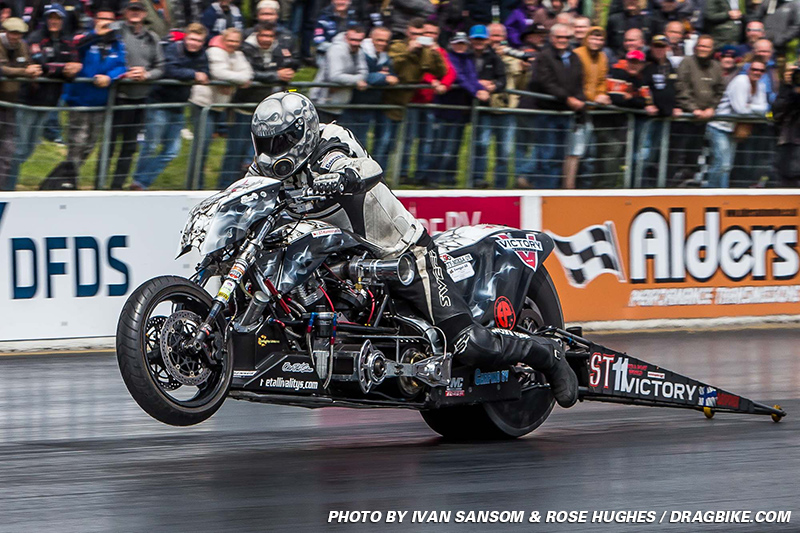 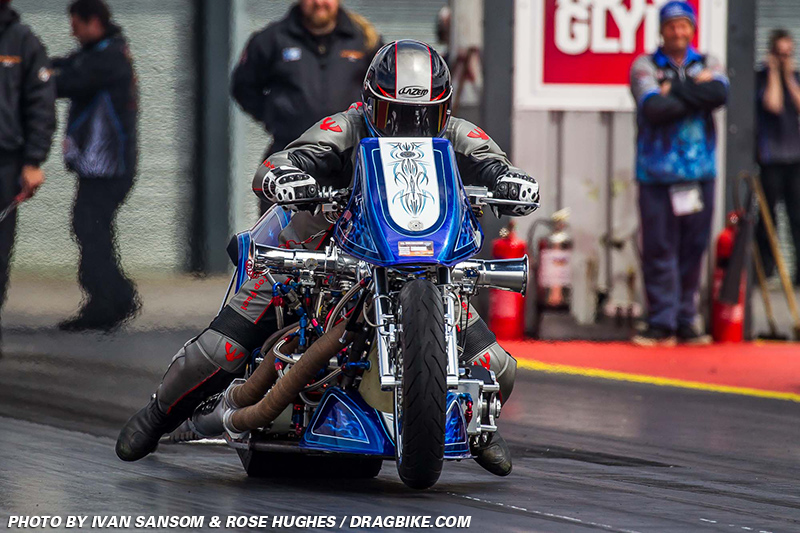 Eliminations would see the pair work their way through to set up a Finland v Netherlands final, despite Kemppainen taking out the timing blocks on a first round solo that would have delivered the six forty he was looking for at the outset of the event, before outrunning Chris Hannam at the semi-final stage, whilst de Haas worked his way past the blower bike of Olstad and the injected V60 of Czech racer Roman Sixta at the quarter and final four stage respectively. The final didn’t disappoint with Kemppainen rumbling to a 6.587/220.04 whilst de Haas taking the runner-up spot with a 6.798/210.12. 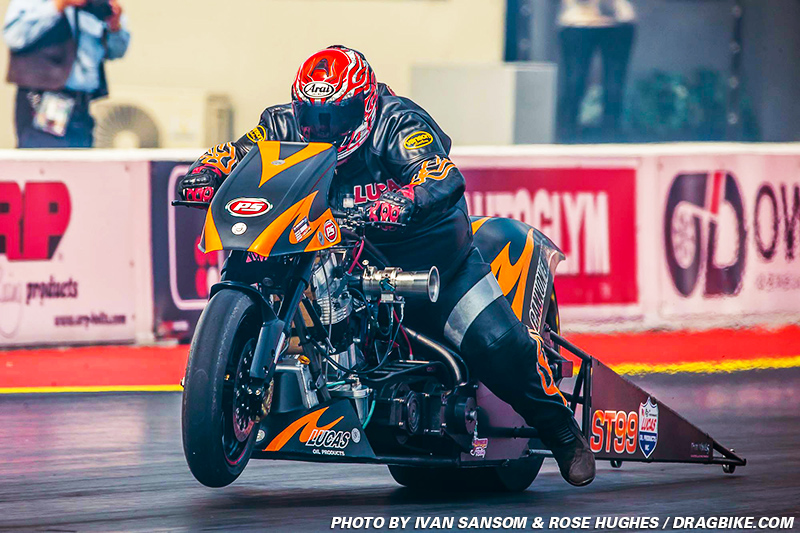 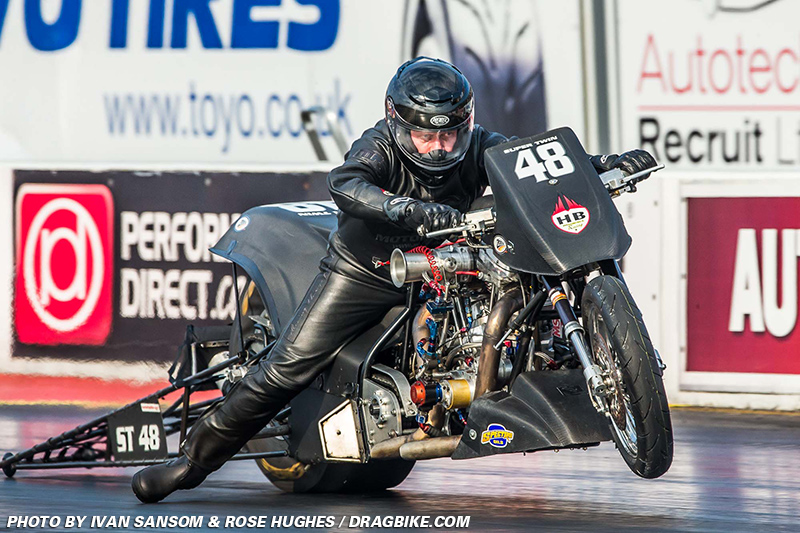 Last year’s championship runner-up Gert-Jan Laseur headed up qualifying with 7.1761/182 from his Eurol Oil/Zodiac Buell with tuning guidance provided by a visiting Jackie Bryce over the weekend. 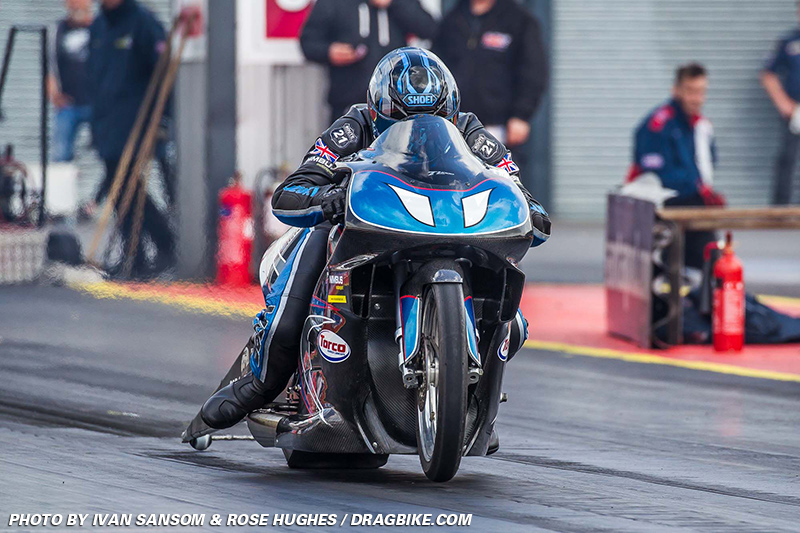 Alex Hope rolled into second spot with a 7.2244, whilst Kenneth Holmberg’s event pretty much started and ended with a 7.2988 that gained third on the ladder but a lot of shrapnel from the crank, sleeves, valves and top end. Defending champion Fredrik Fredlund was also struggling, mainly with transmission problems that dropped him to 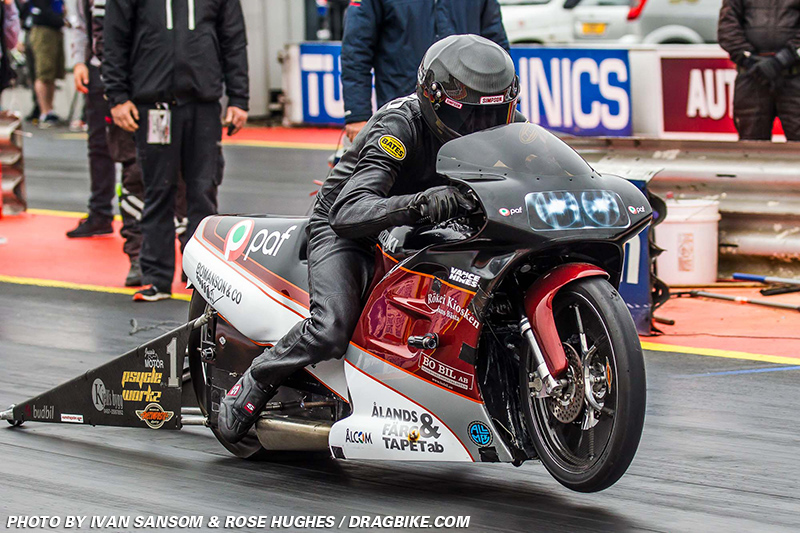 Defending champion Fredrik Fredlund was also struggling, mainly with transmission problems that dropped him to fourth spot. The quarter finals saw Laseur, Fredlund (with a 7.214/187.33 for the quickest run of eliminations), Hope and Mark Smith progress to the final four. Fredlund appeared to have put his qualifying woes behind him in the top half semi opening out a visible gap over Laseur at the startline that was growing before the PAF Suzuki smacked the finish line blocks. 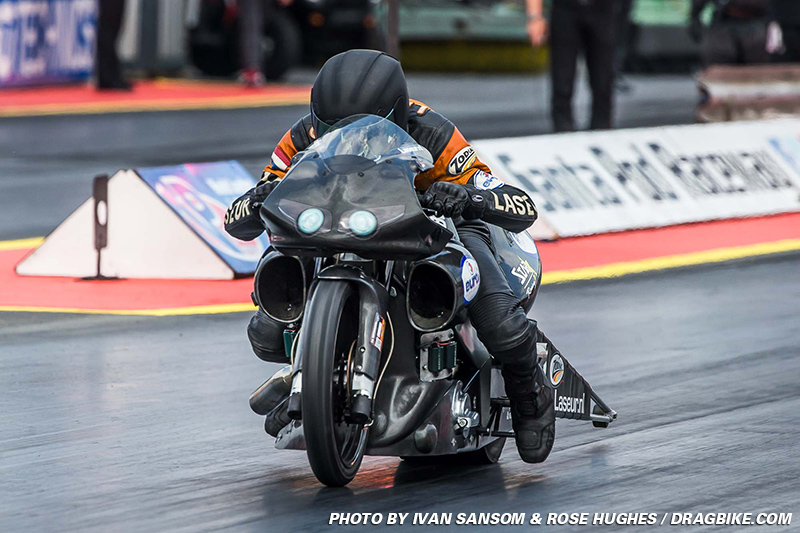 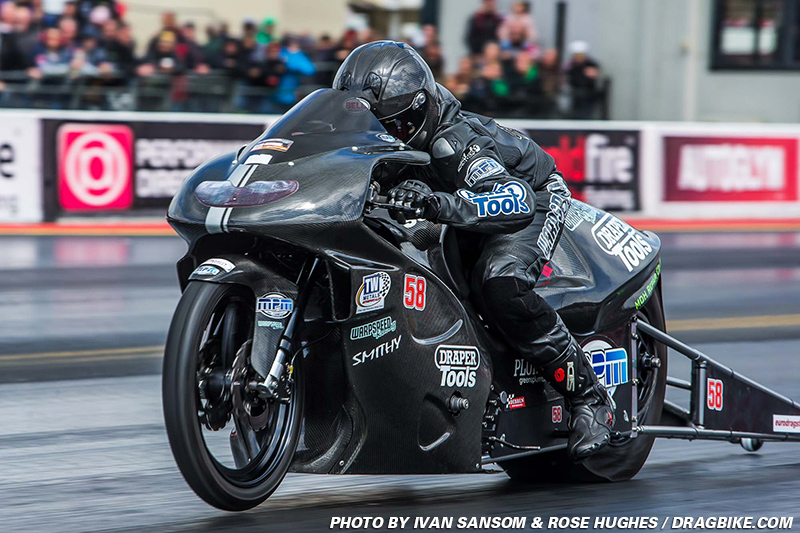 It was a meeting of highs and lows for the Ven Racing father and daughter duo in Super Street Bike. Steve with a fair few new bells and whistles on his DME Hayabusa crushed the rest of the field on a 6.9355/206.03 in the second qualifying session; the quickest pass in Europe. 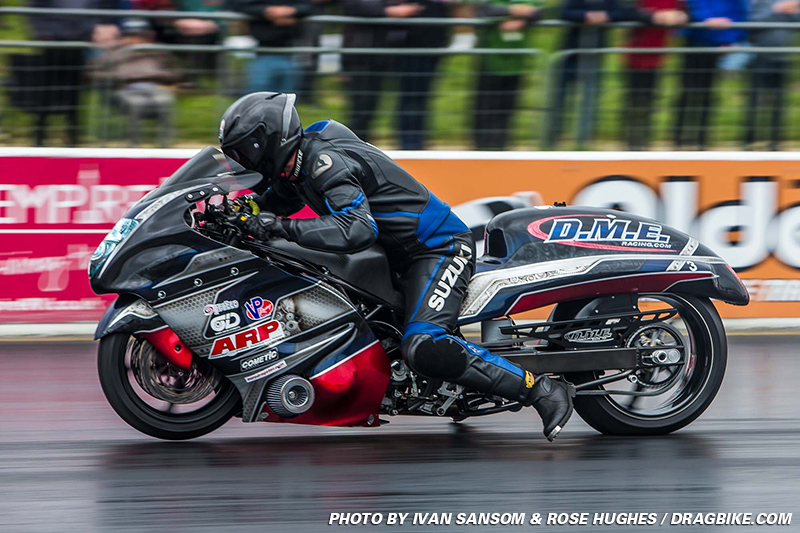 In the third session Jemma (having failed to set a number to that point) provided the low with a wheelie getting large and flipping over, fortunately the bike not collecting her on the way so injuries were restricted to a few bruises. Fourth qualifying session and Steve was back on his Busa and carding a 7.0355/210.10mph for a new class speed record. 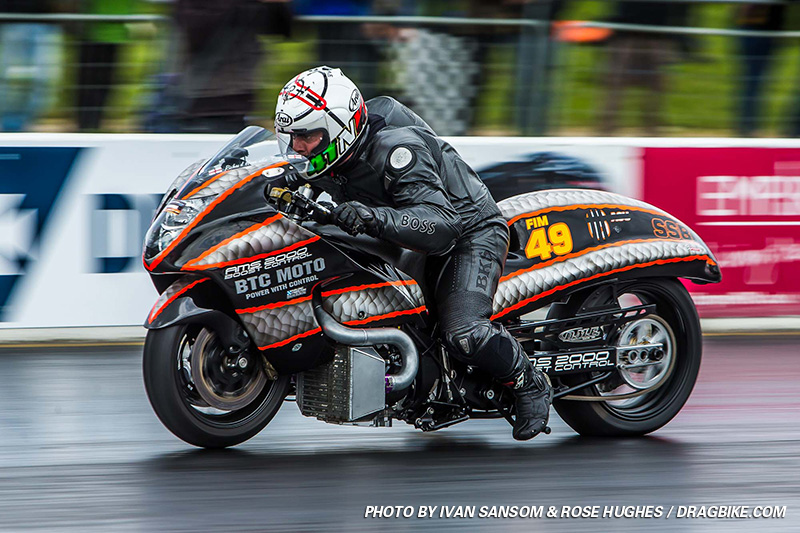 Second on the ladder was Rick Stubbins with a 7.1040/203.26, with the sixteen bike eliminator boiling down to an all British final four with Ven defeating last year’s series winner Garry Bowe who left a bunch early, whilst Richard Hann fell to Stubbins when Hann’s 7.3203/198.04 failed to catch up with an early shut-off 7.3036/182.84. 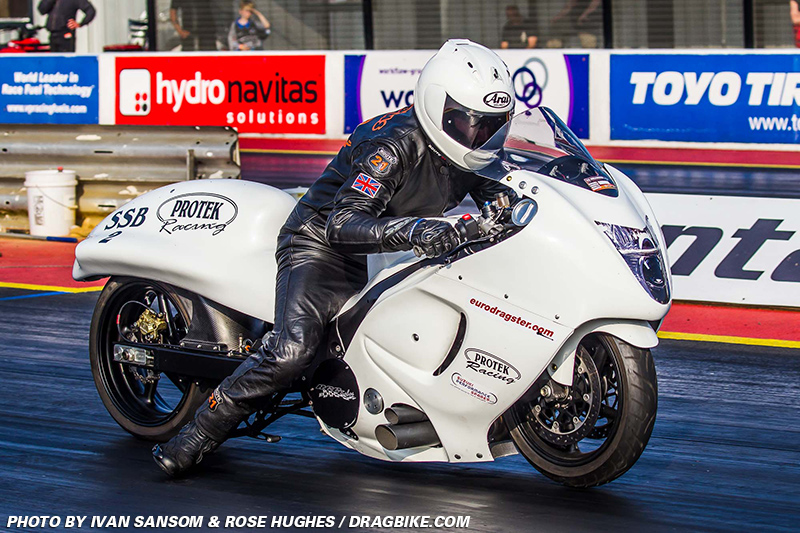 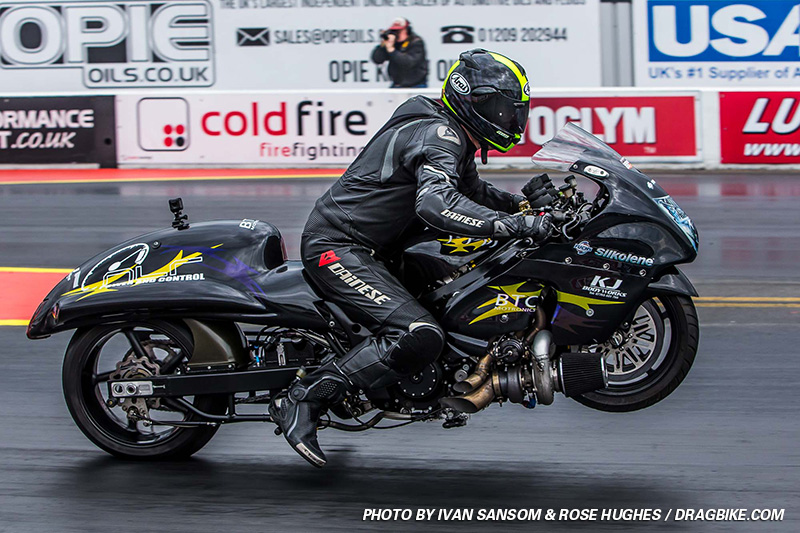