The biggest event on the European calendar and the start of a frantic finale to the season, the NitrOlympx saw the Rico Anthes Quartermile in a superb state of prep during the course of the event, although rain-curtailed activities on Saturday and restricted the Night Show to largely static activities. Despite this and the gathering heat and humidity on Sunday that made the track sweat a bit during eliminations, the 2019 edition will go down as a pretty successful conclusion to Jerry Lackey’s tenure in charge of the show.

The battling duo of Rikard Gustafsson and Filippos Papafilippou have been delivering world-class Top Fuel Bike pairings across Europe this season and the NitrOlympx would see them one (6.149) and two (6.152) respectively after qualifying.

The opening round of eliminations saw Gustafsson improving to a 6.078/241.02 which would hold for the best numbers of the event and Papafilippou nudging his best of the weekend to a 6.114. As the heat and humidity increased the fuel bikes struggled to stick although the Gulf Oils scooter used a 6.150 to overcome a 6.538 PB from Glenn Borg and his Funny Bike at the semi-final stage and then used a 6.210 to hold off Gustafsson’s 6.526.

Fast Fil now has just over an elimination round advantage in the points as the FIM-E classes head towards their conclusion at Santa Pod in early September.

Super Twin was a bit of a mess, nothing to do with the riders, but the decision taken by the FIM-E to permit a rider who failed to record a qualifying time into the elimination ladder ranks right up there with any global jaw-droppers and the ramifications of this misreading of their own rule book will reverberate for a while yet.

Anyway, that shouldn’t detract from the on-track series put up by the assembled group with Roman Sixta leading the way after two completed qualifying sessions with a 6.660.

The Czech rider would remain in the mid-six second zone throughout eliminations with his V60 powered show and go scooter and produced the class fastest pass in defeating Neil Midgley in the final with a 6.704/212.56. Midgley had earlier gained a number of plaudits by knocking points leader Marcus Christiansen out during the quarter-finals with a 6.580 at a lowly 186mph that indicated a damaged piston that would hamper the Cannon Engineering DOHC blower bike for the remaining two rounds.

Christiansen’s points lead would require a substantial reversal of fortunes and a flawless run from Gertjan Laseur at the Euro Finals if the Dane is to be denied a second title in a row. 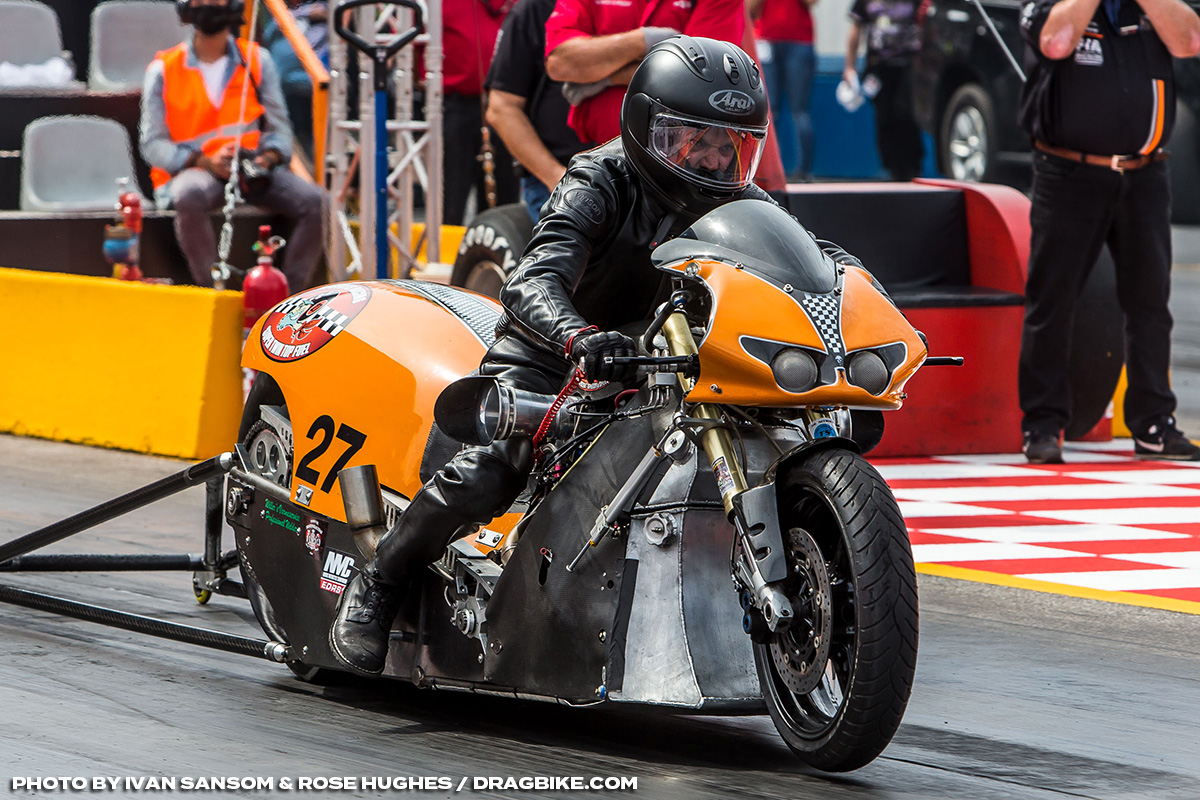 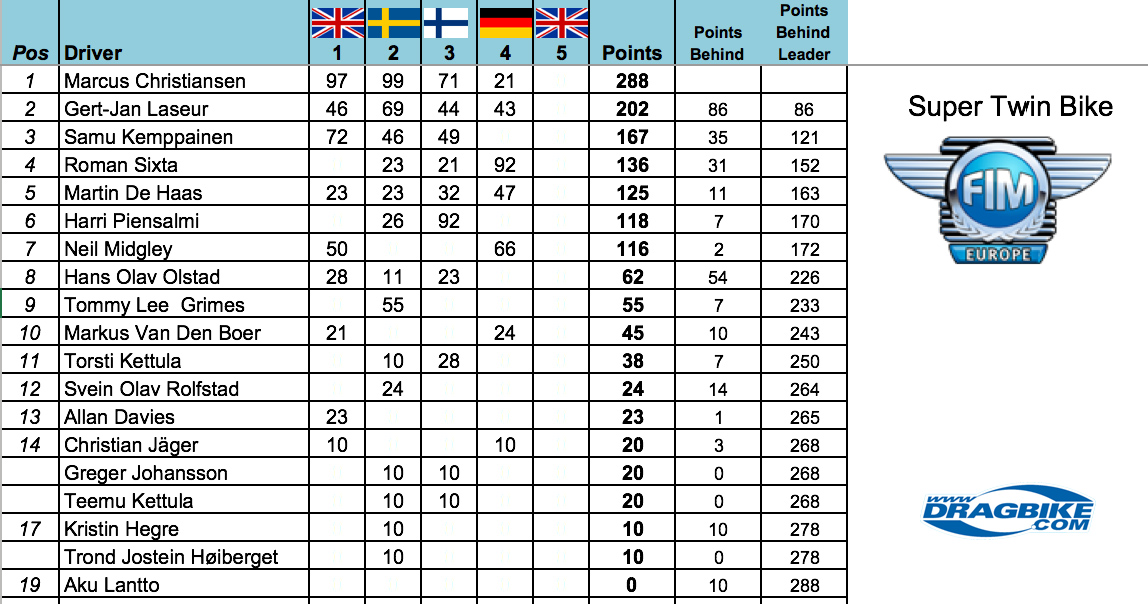 The central European location of Hockenheim drew in thirteen entries for Pro Stock Bike which is substantially more than had been achieved in the preceding trio of events.

Fredrik Fredlund topped the qualifying sheets with a 7.067, but transmission problems caused a second-round exit for the points leader.  Second, in the points, Janne Koskinen failed to take advantage and remains half a round behind Fredlund as he also left the scene with a lane disqualification whilst matched with a returning Charly Abraham.

Abraham would use some sharpness on the tree to work his way to the final and then gained a freebie when Len Paget red-lit although Abraham’s Buell was two tenths quicker in any case with a 7.330 winning effort.

The Hockenheim Super Street Bike field is always a substantial affair and this time the sixteen bike bump spot was lowered to a 7.527 and would have progressed further had the third qualifying session for the class not been negated by the wet stuff.

Finn Vesa Ruhanen leading the way with personal bests from his quick Kawasaki ZX-14R (6.953/216.79) and was followed by Sweden’s Hayabusa equipped Mathais Bohlin (6.998/206.07) at the top of the qualifying sheets and were the first two to record six-second passes in Germany.

By the end of eliminations, they wouldn’t be the only ones as the traditional British dominance of the NitrOlympx Super Street Bike action swung back into play as Garry Bowe (6.979) and Steve Venables (6.965/212.09), the TS being backed up for a new FIM-E speed record) dropped into the sixes ahead of meeting up in the final.

Ven slowed to a 7.138 but managed to break his NitrOlympx duck in FIM-E Super Street as Bowe stuttered to a double-figure clocking, and the DME Racing backed rider now has a serious championship lead before heading back to his home stomping ground at Santa Pod. 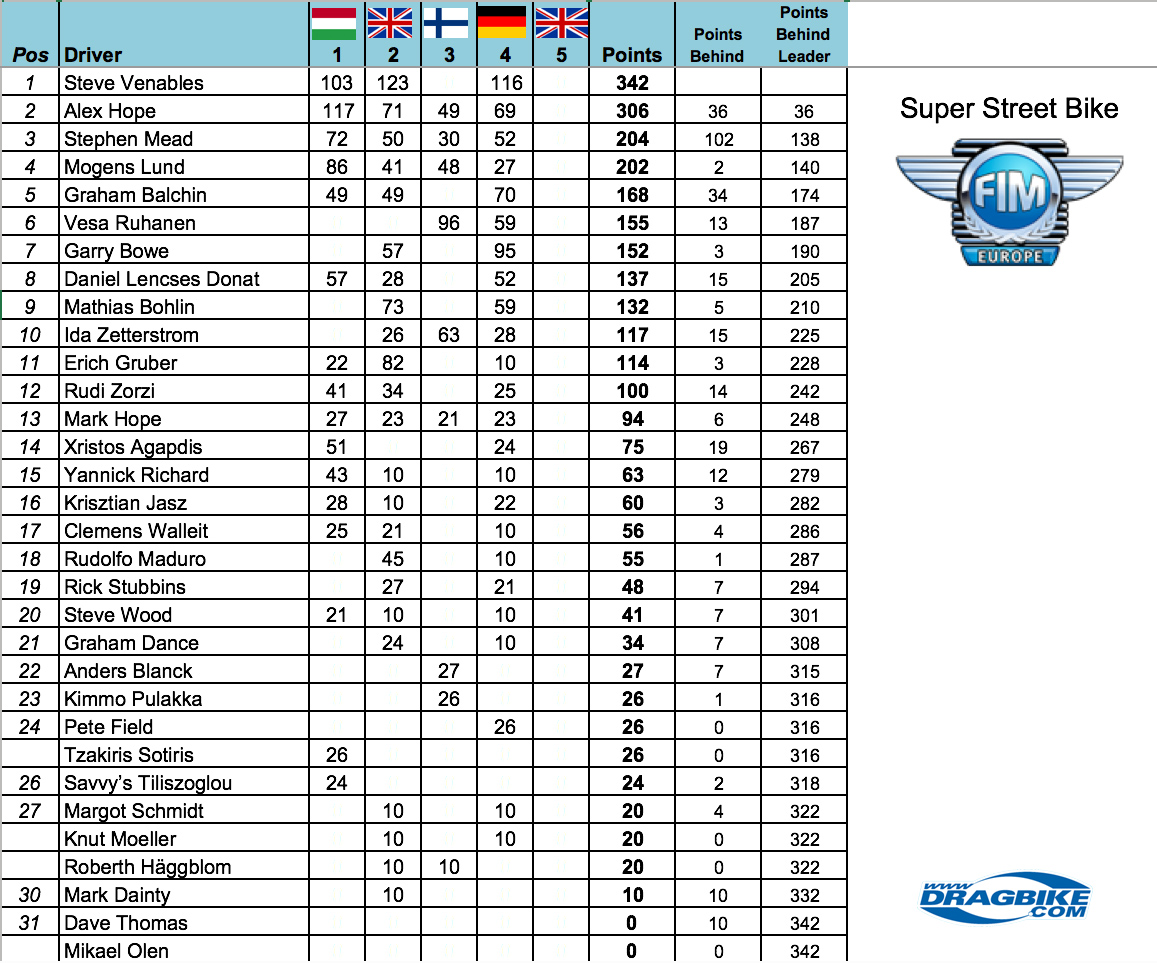 Like Pro Stock Bike and Super Street, the Junior field was an expanded affair from which Marie Rosen emerged victorious thanks to a breakout from low qualifier Tim Christiansen in the final. Meg Talbot maintains a slender points lead over Rosen going into the final event of the Cup series. 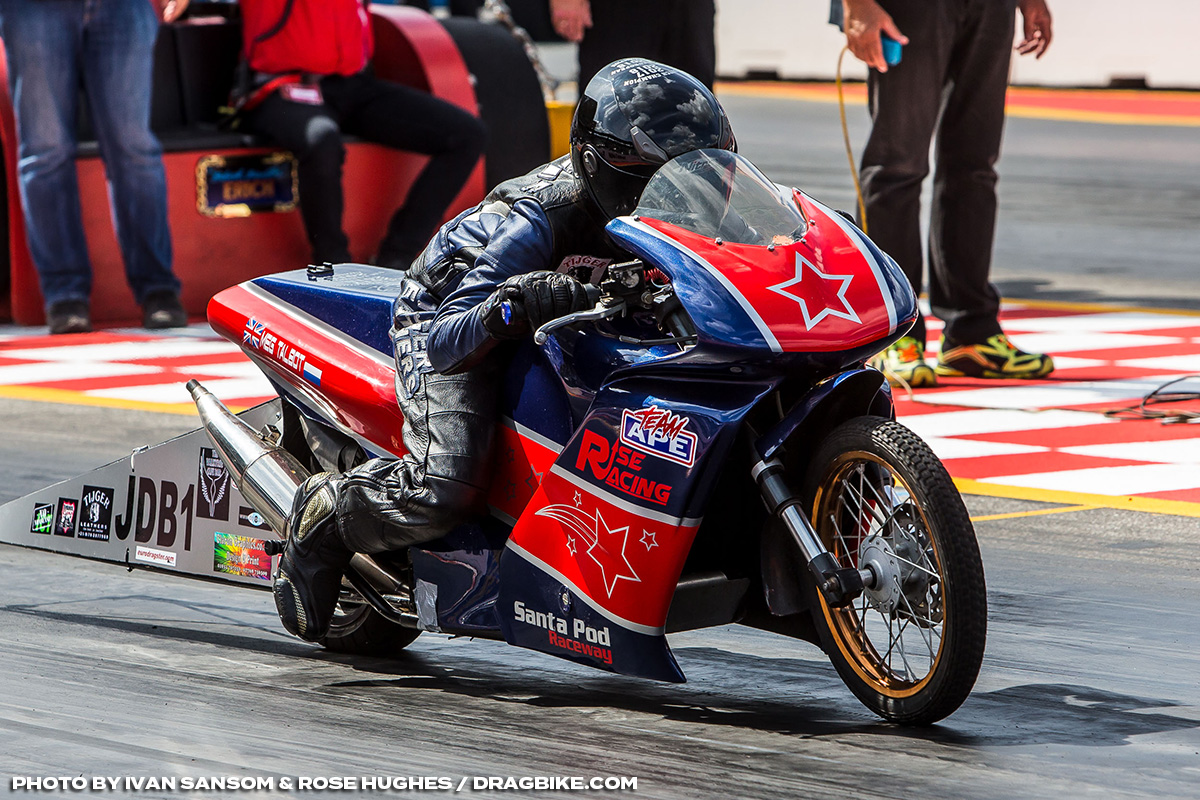 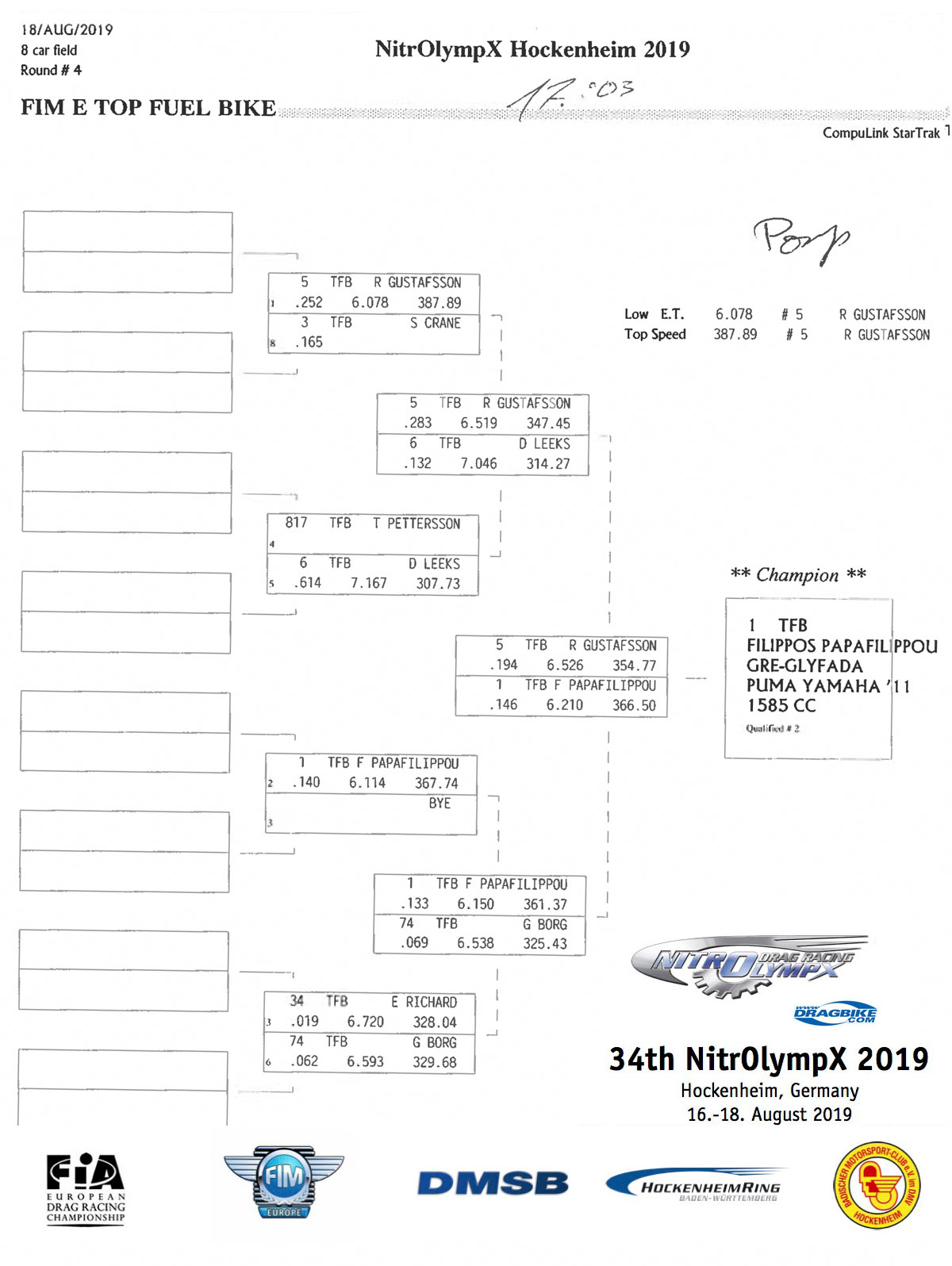 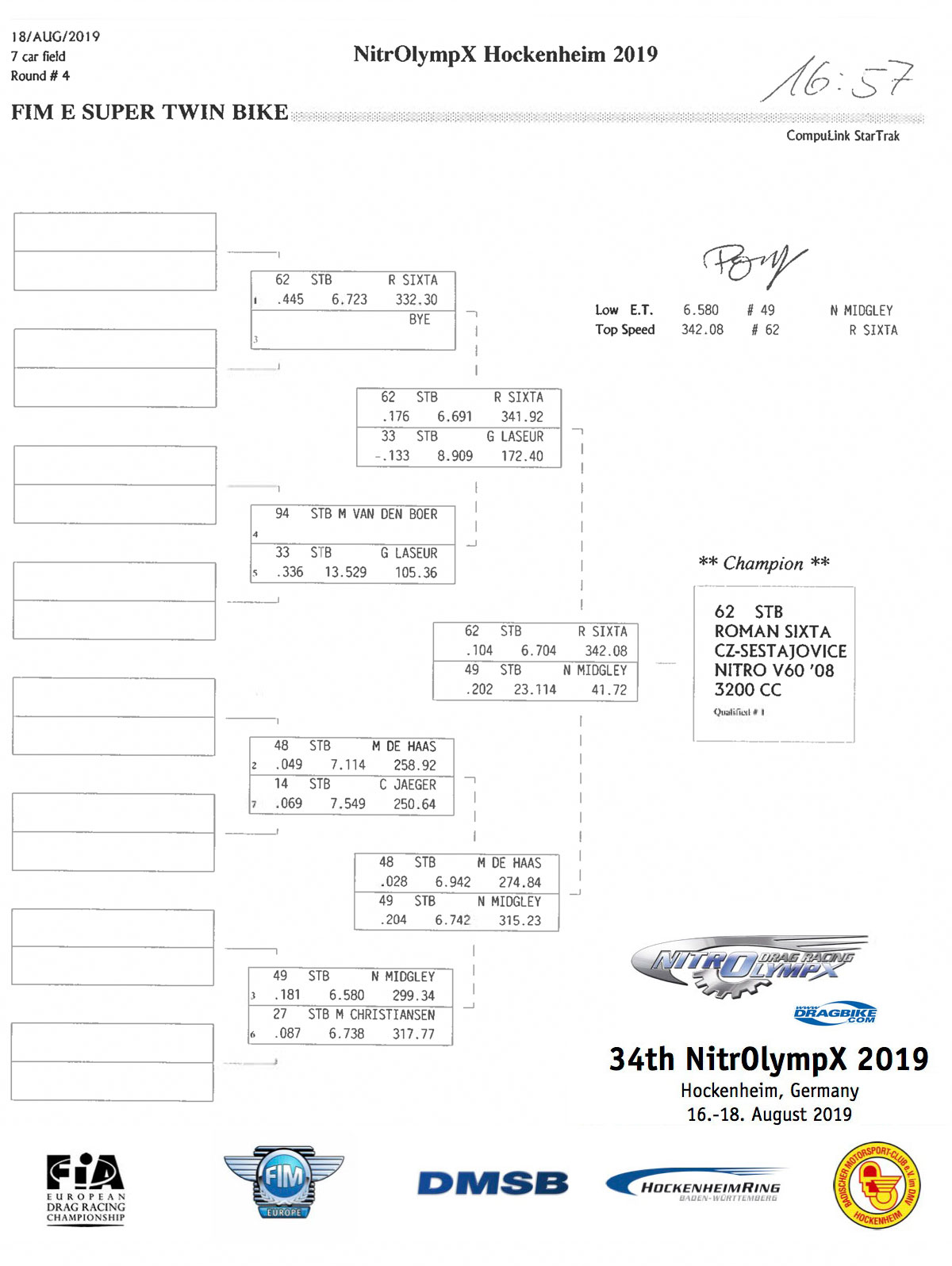 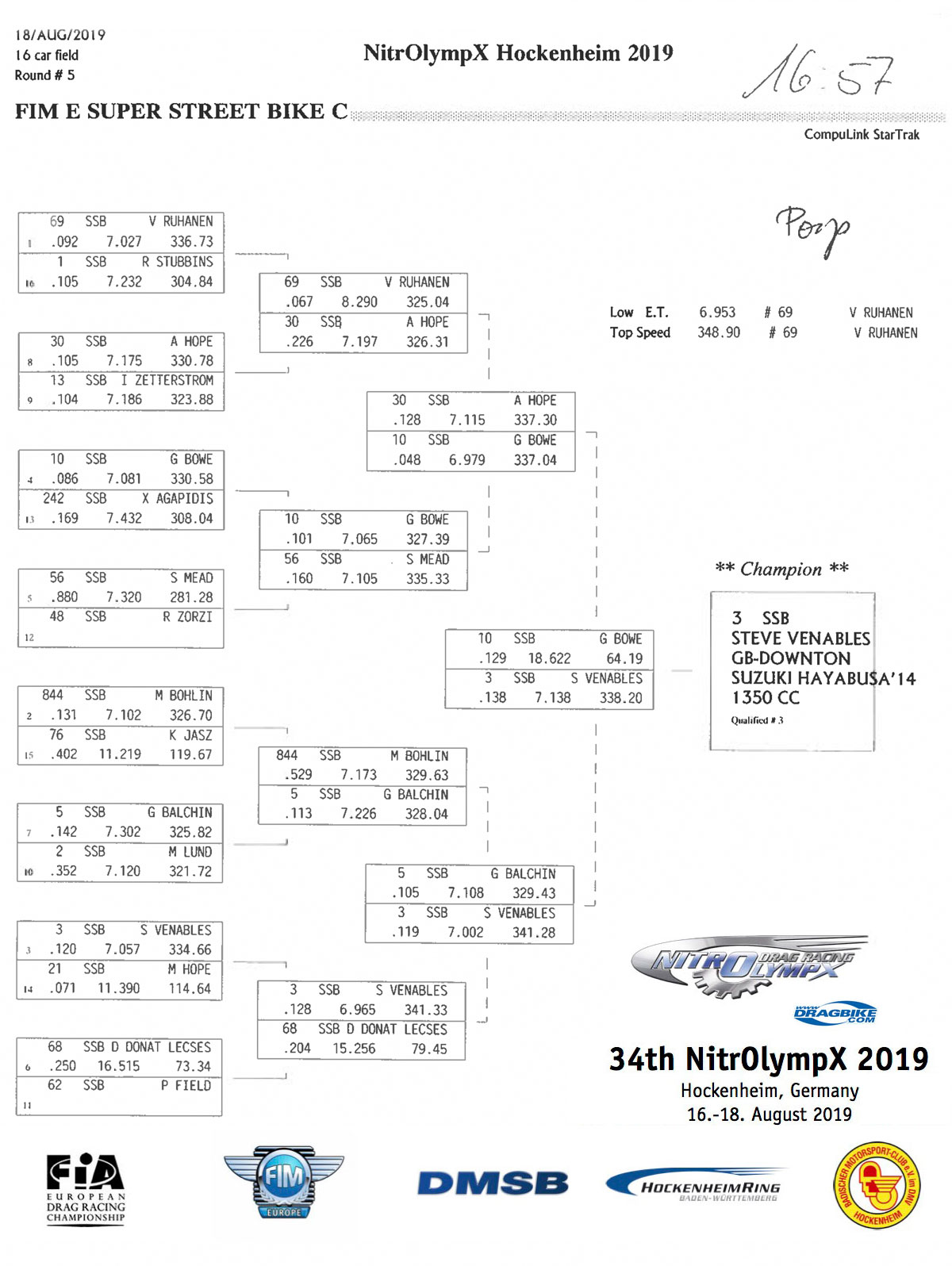 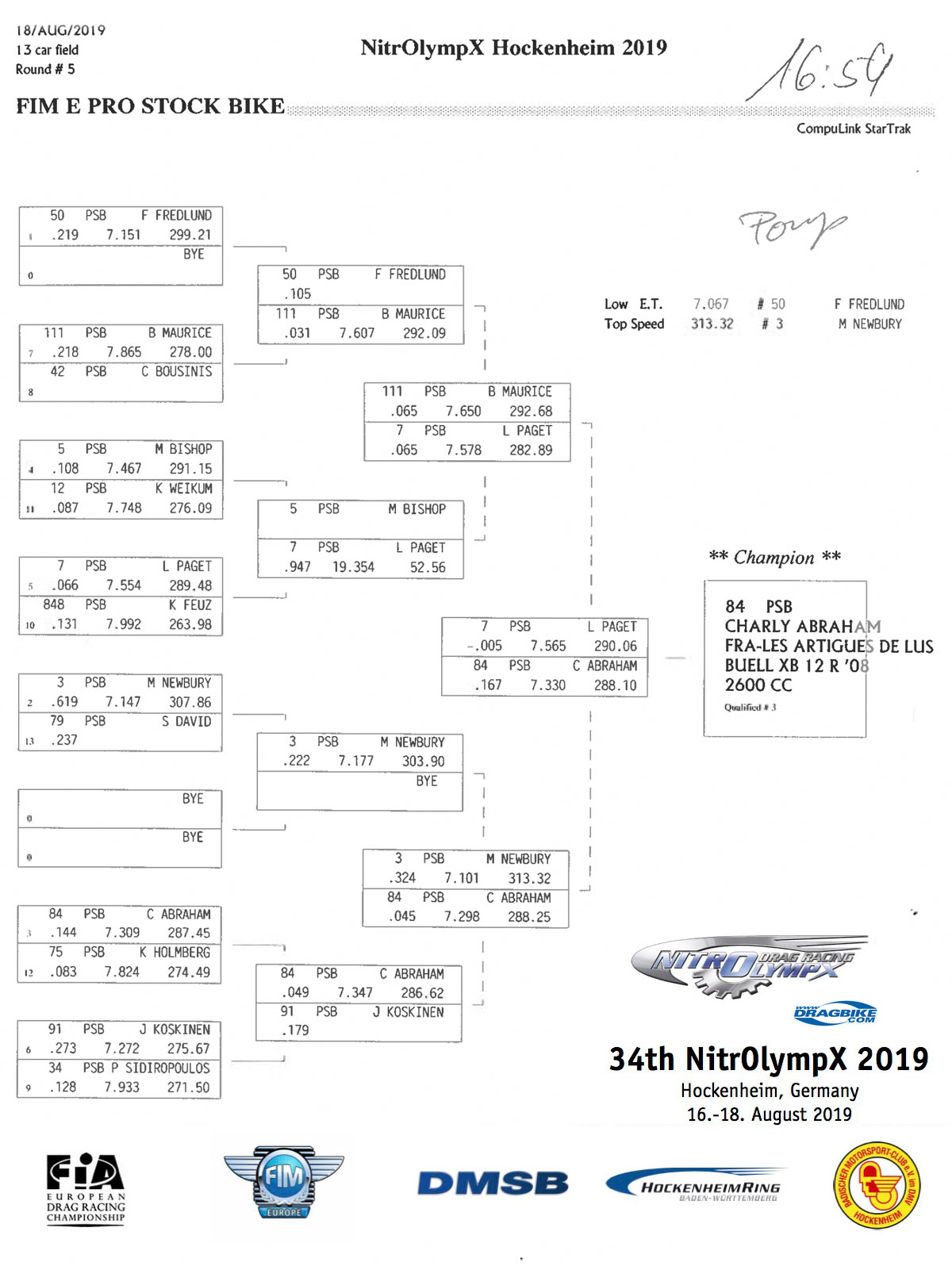 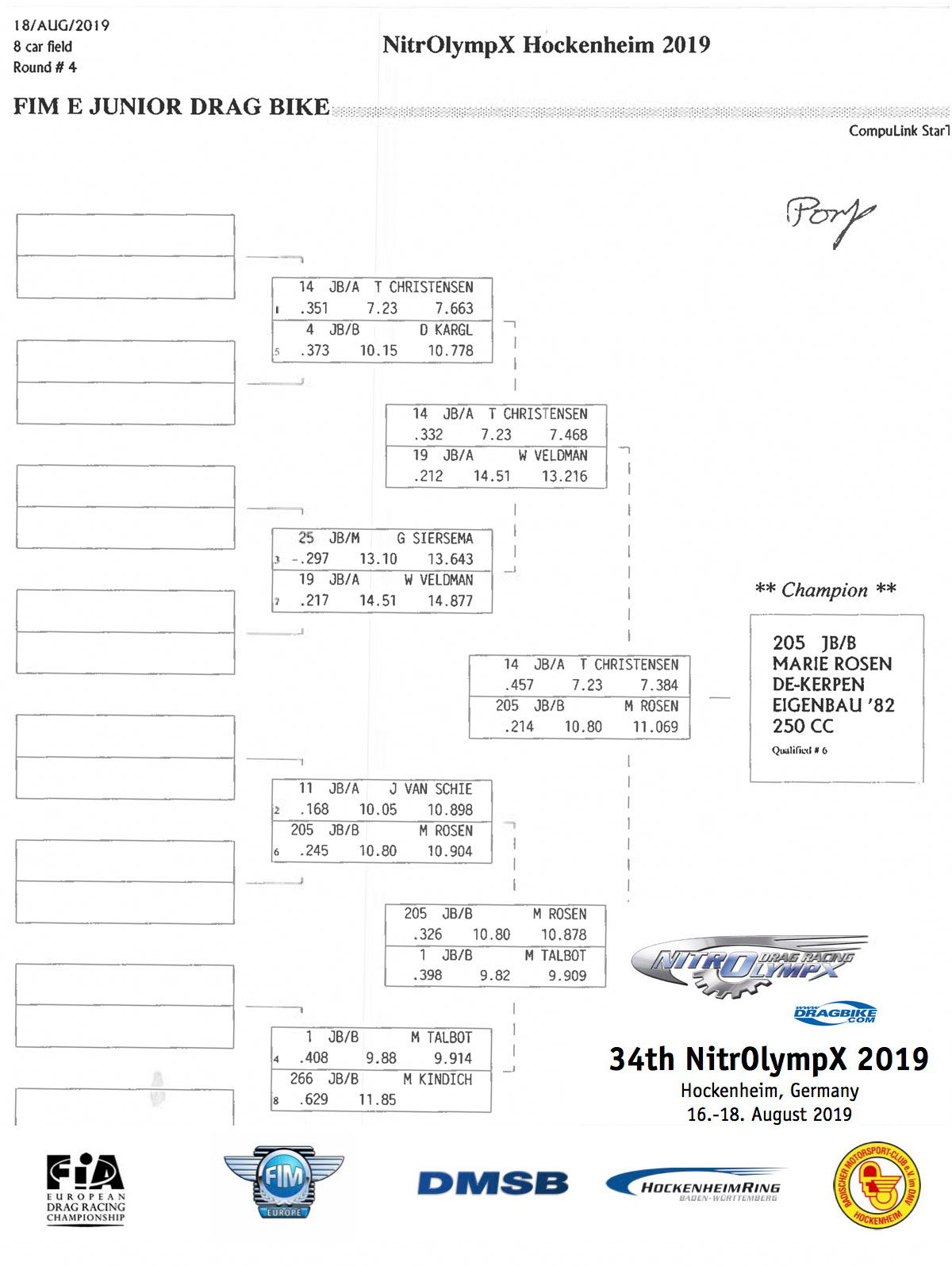 During round 3 of Super Street bike qualifying rain came in and shut down racing for the day. The third round of qualifying has been canceled, and because Super Street Bike was not a complete session those times will not count in final qualifying. 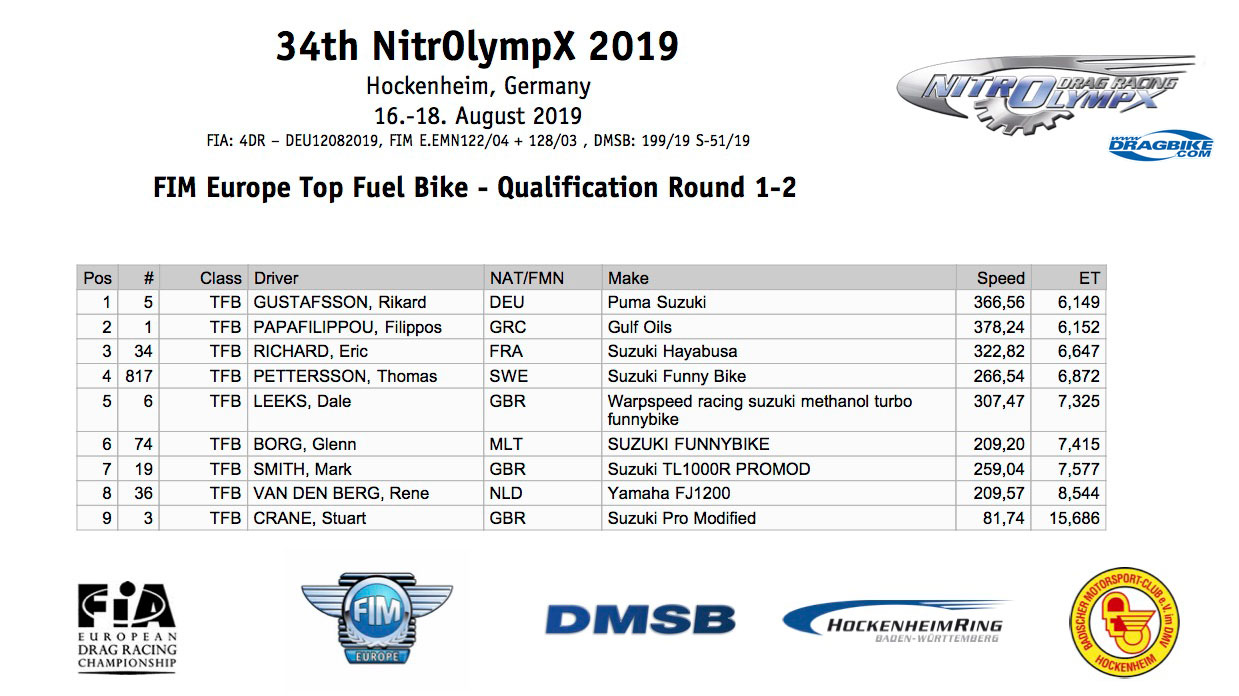 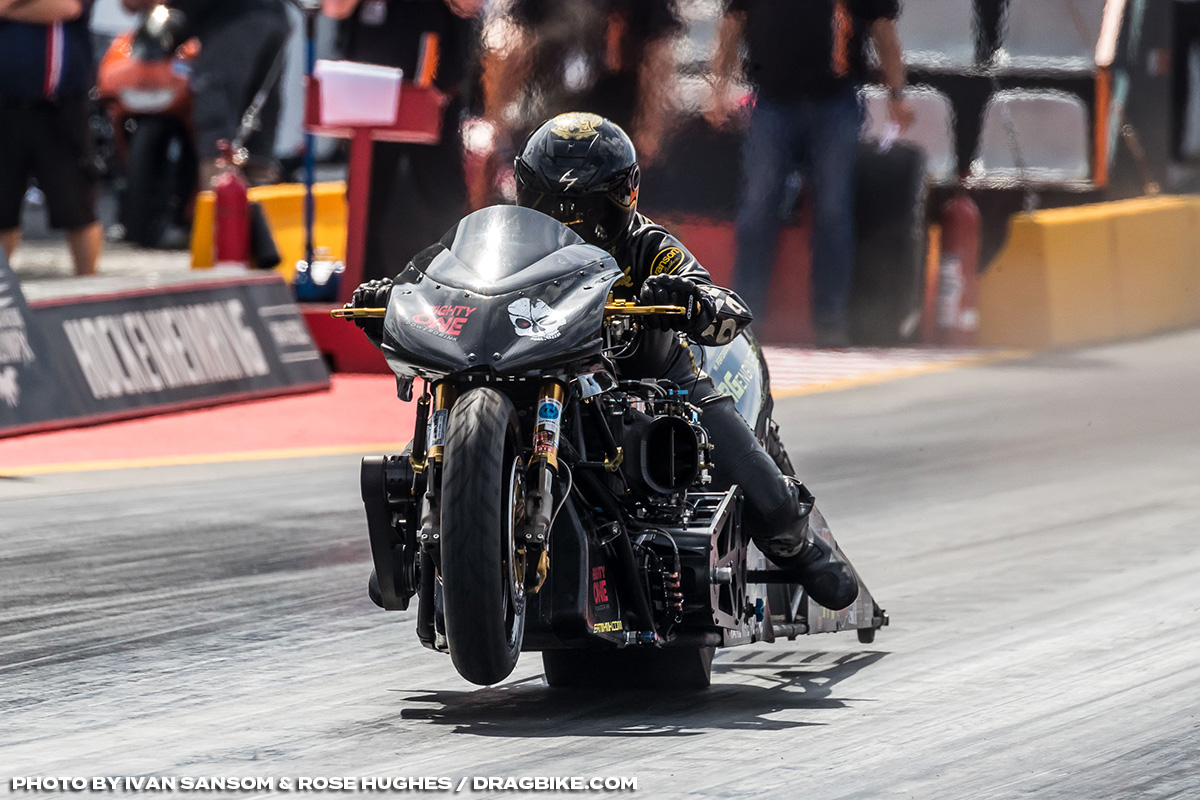 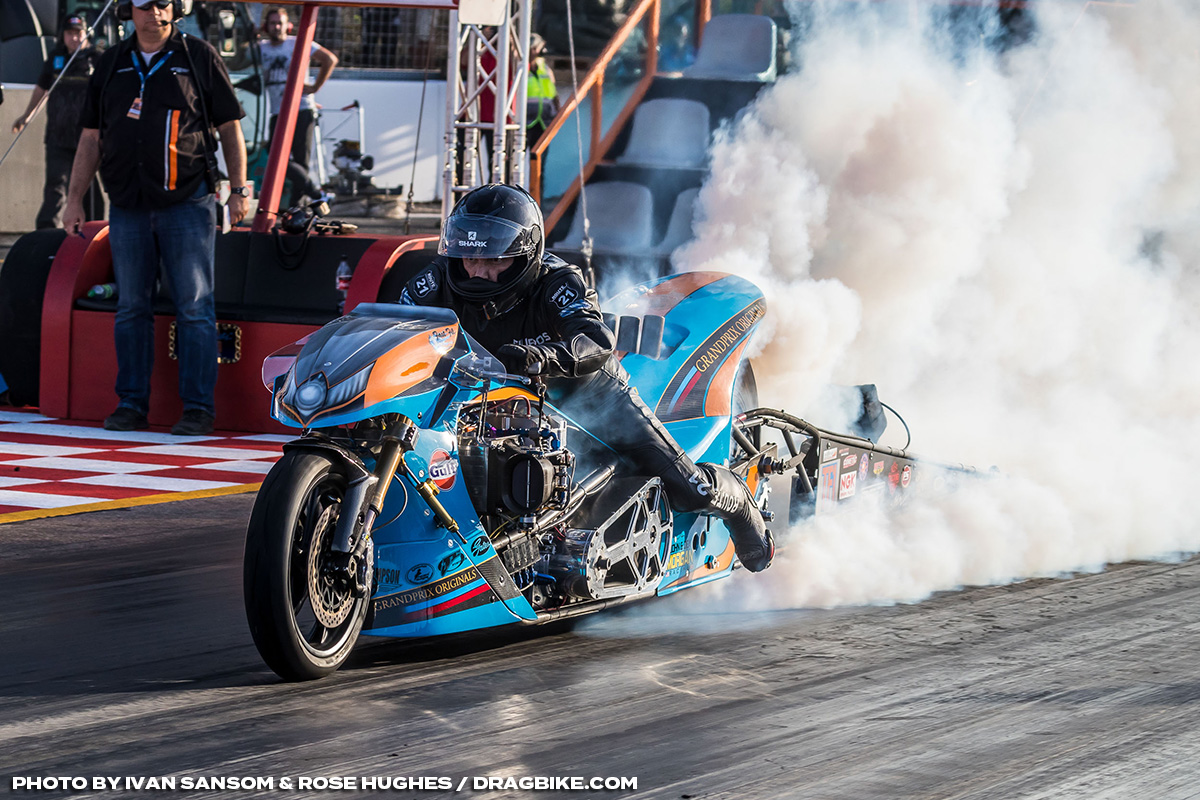 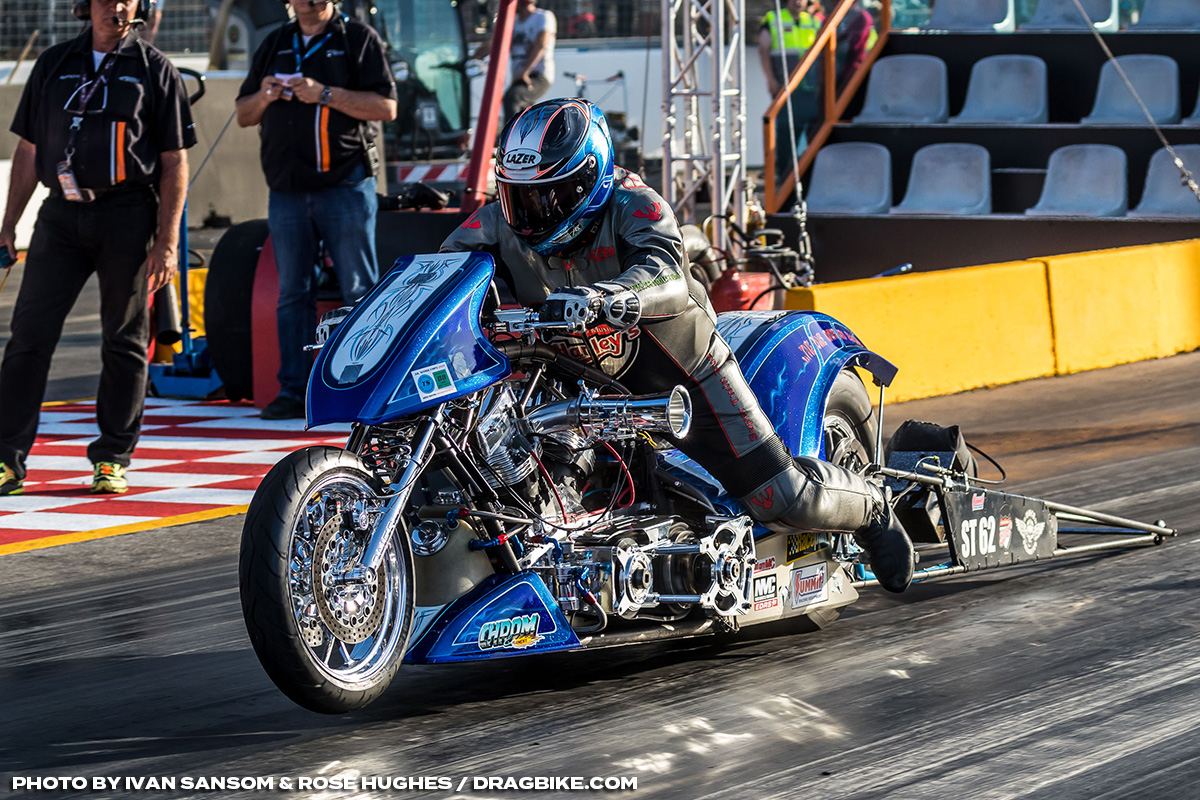 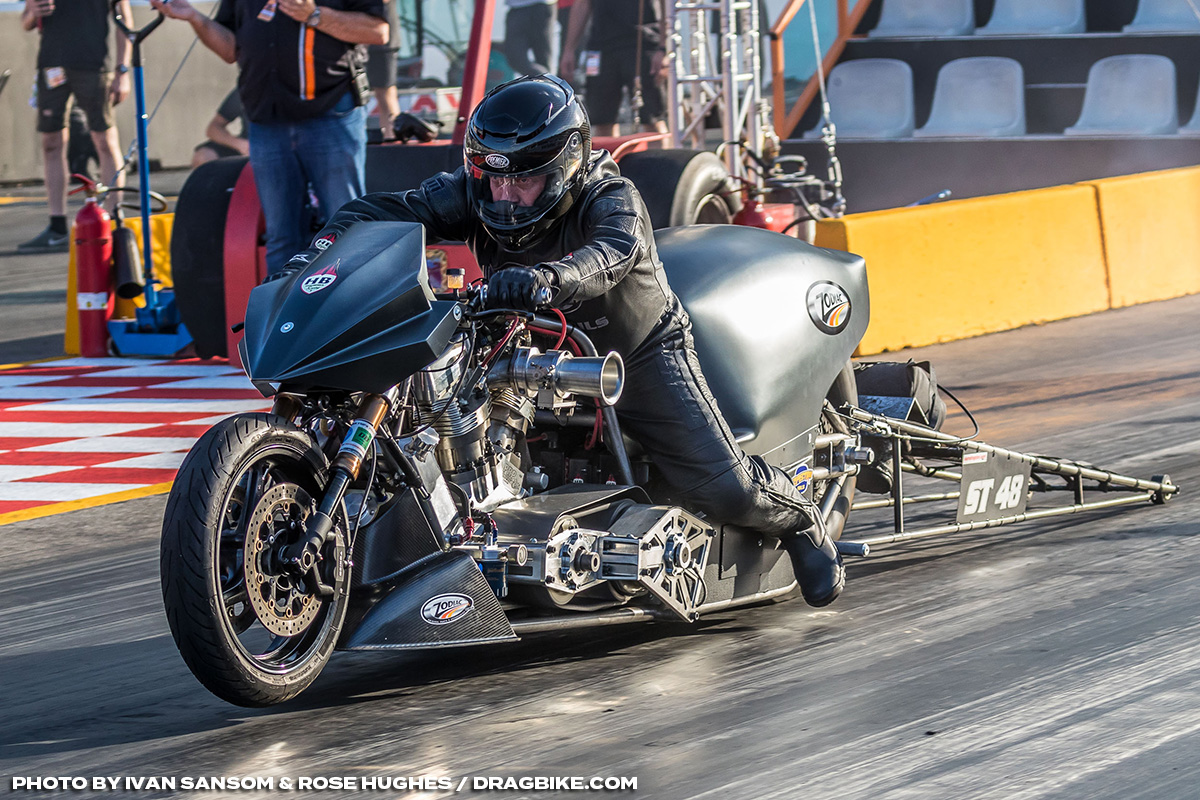 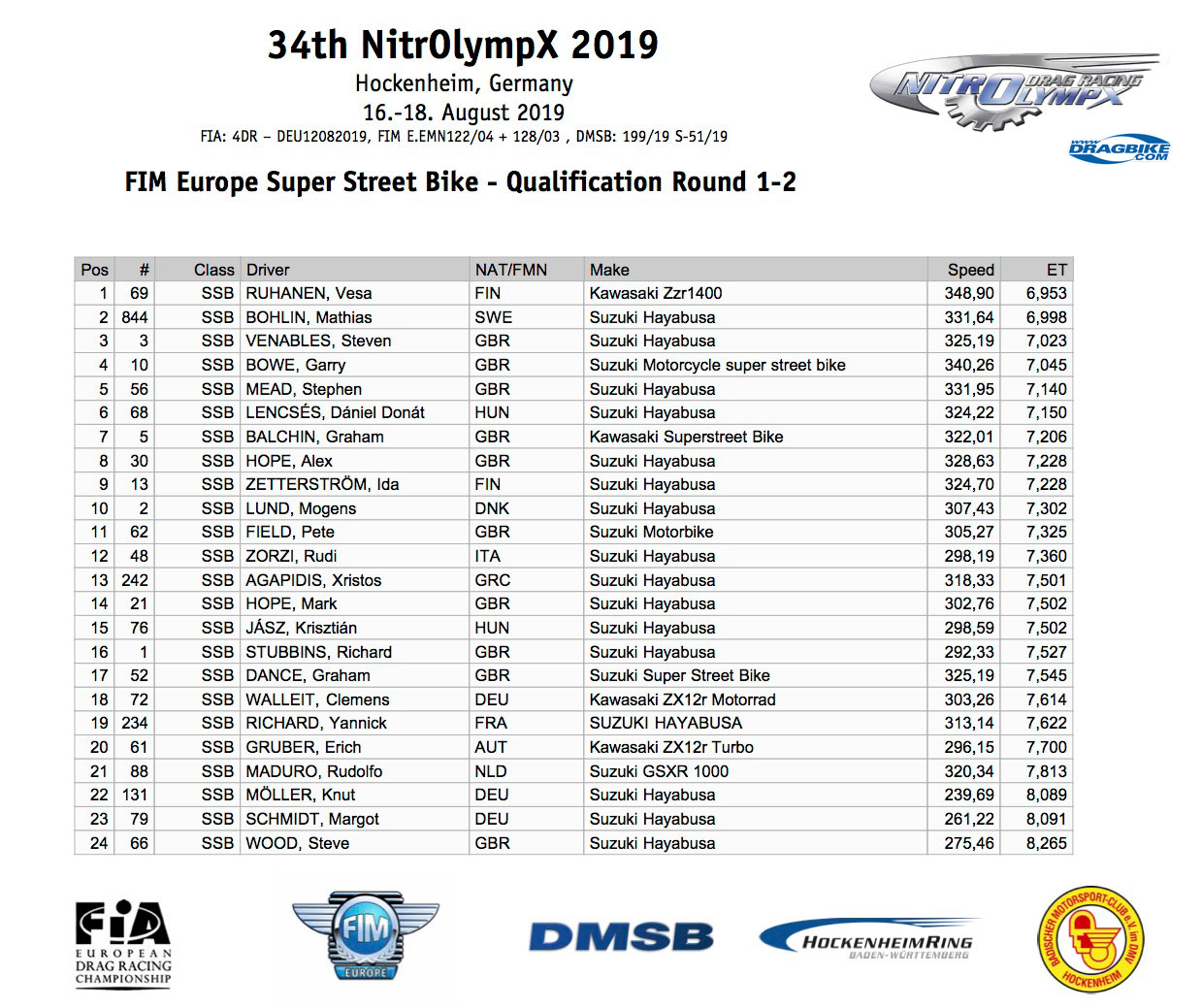 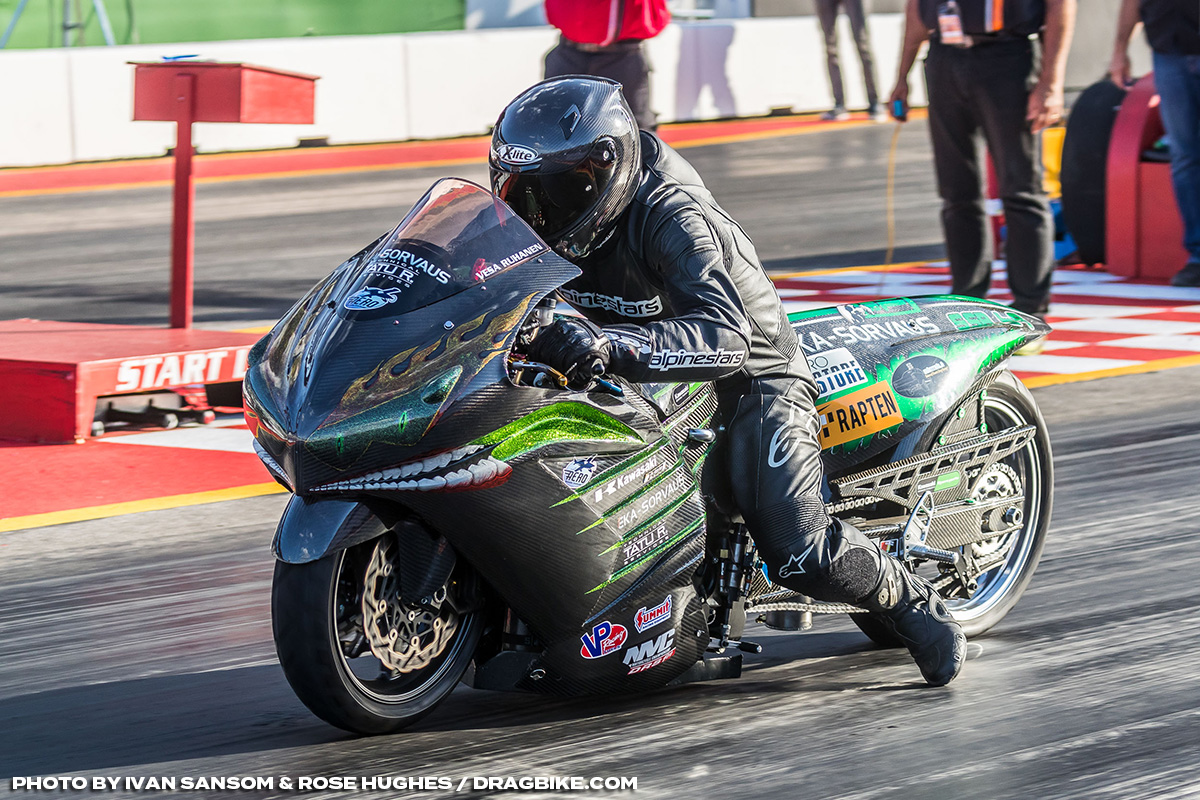 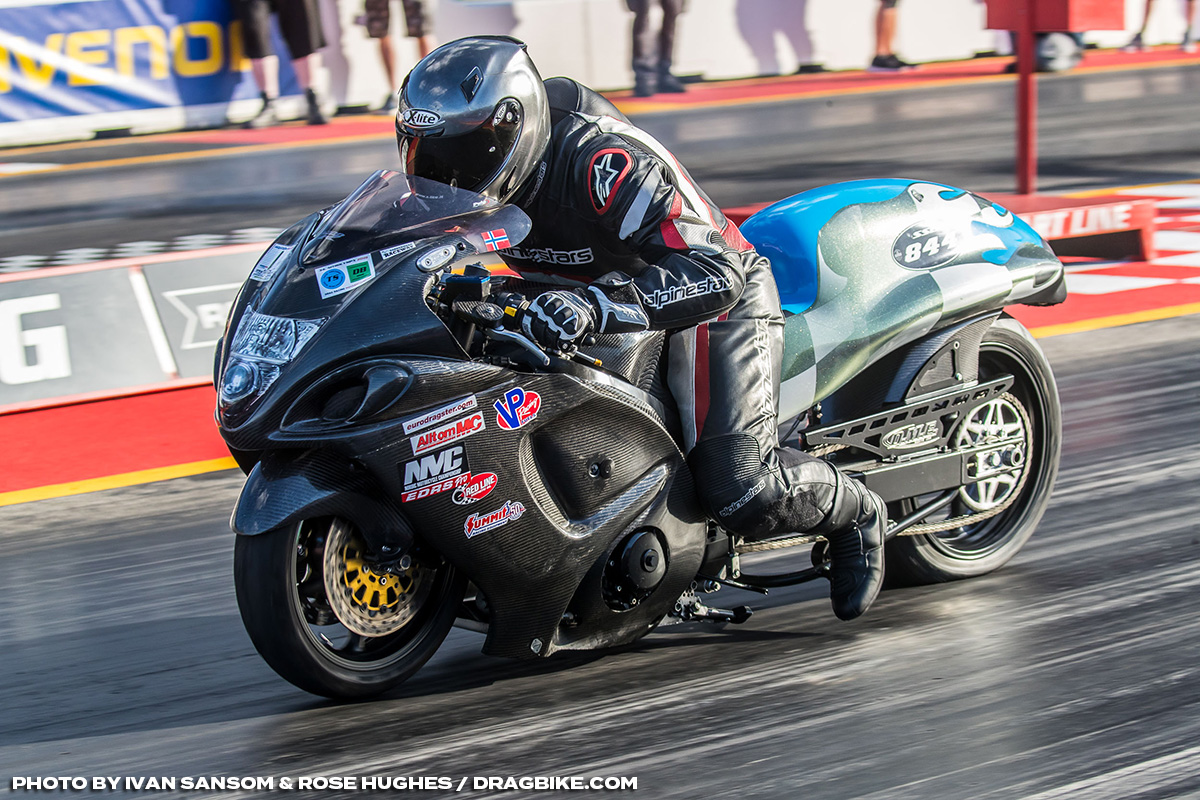 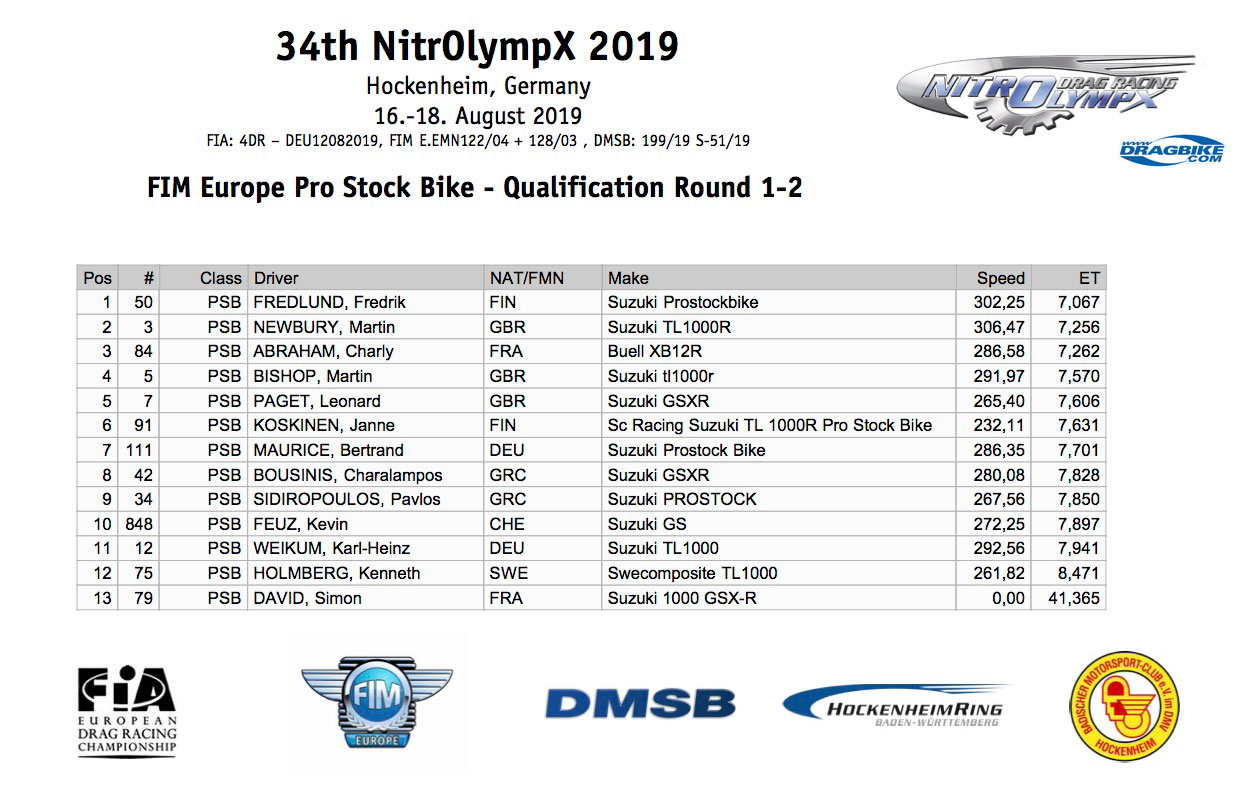 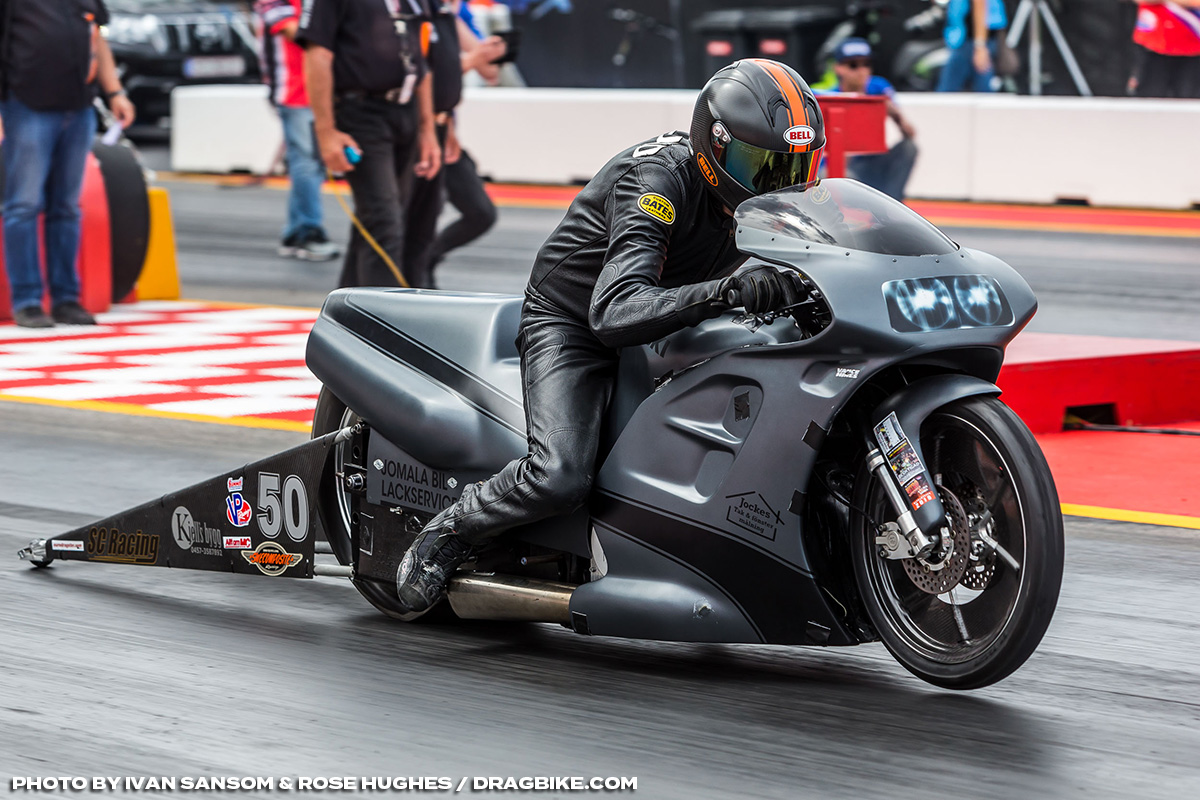 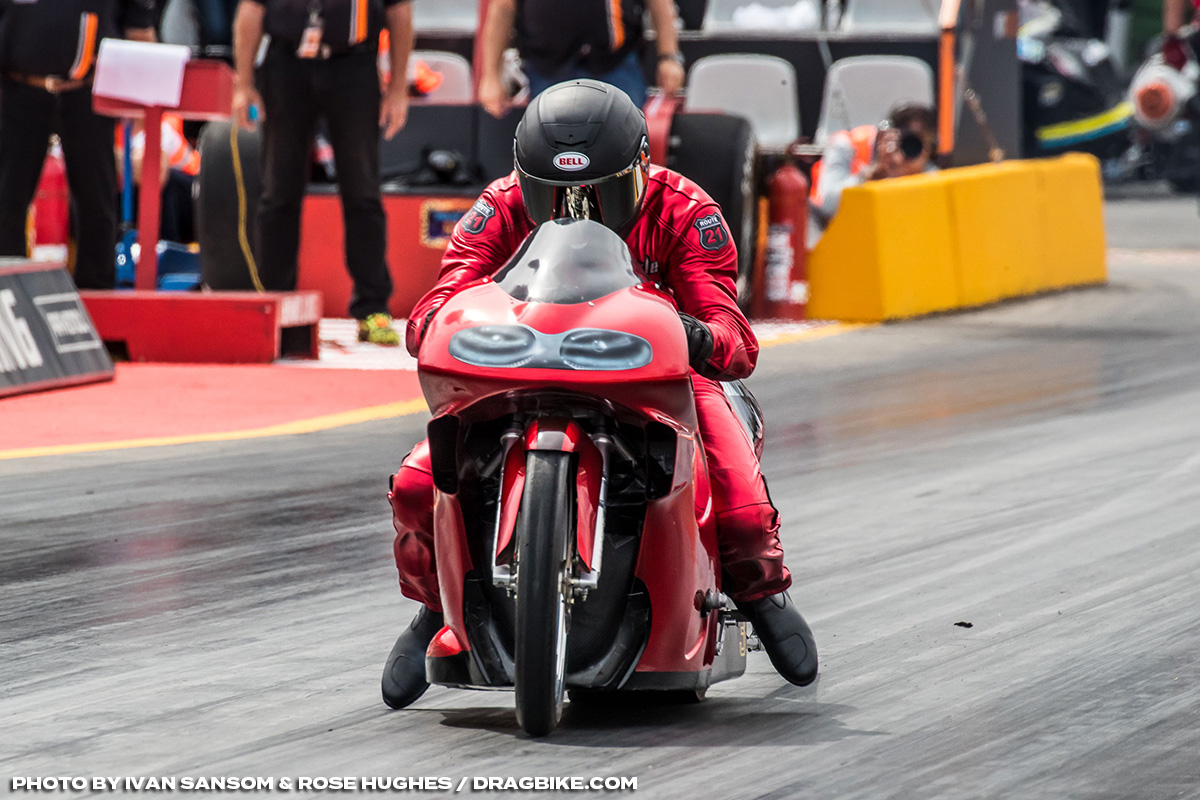 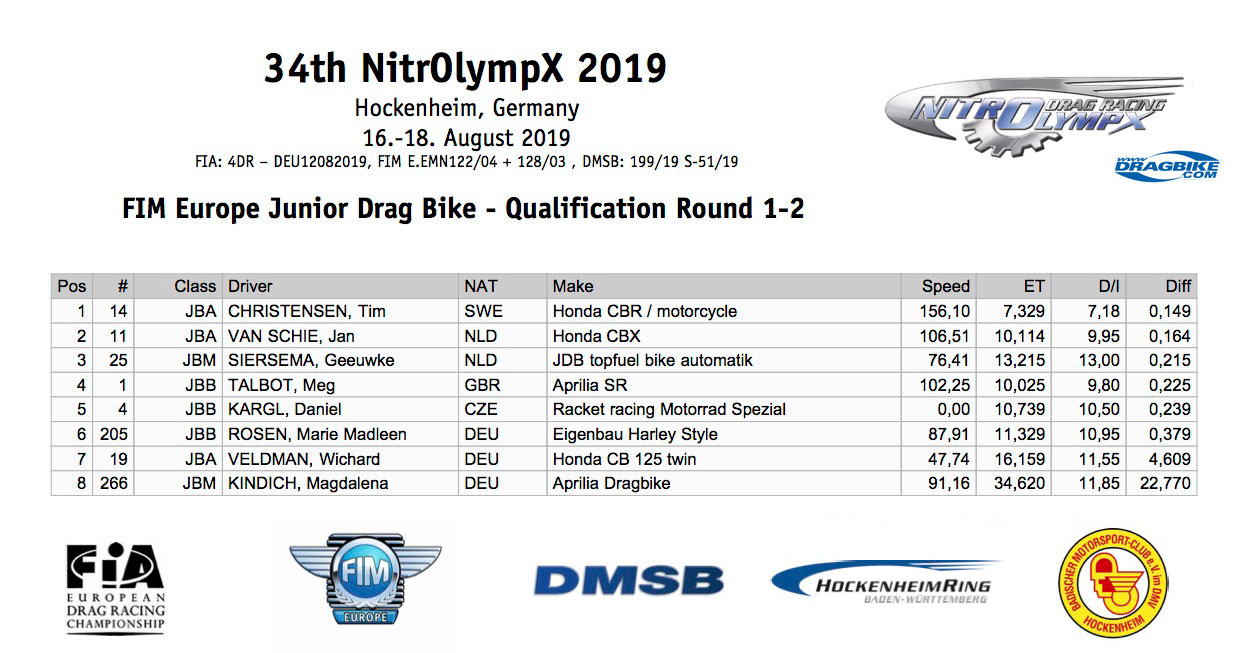 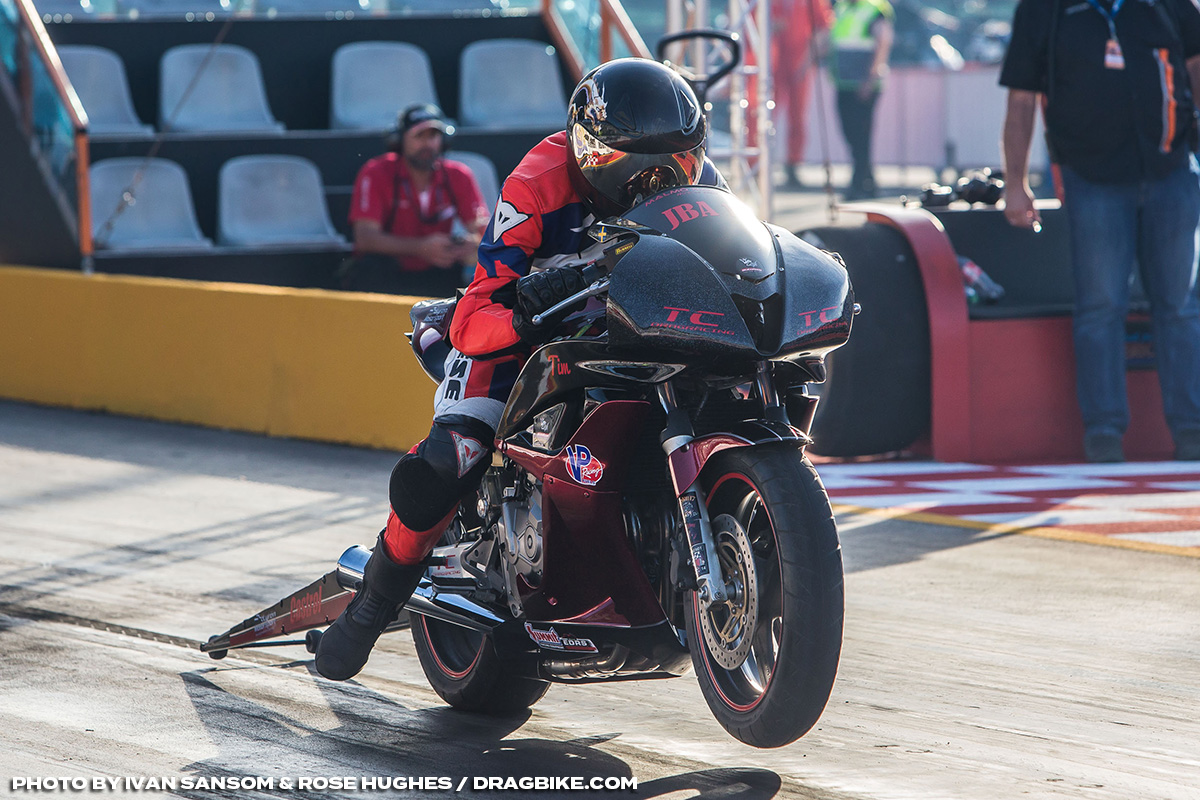 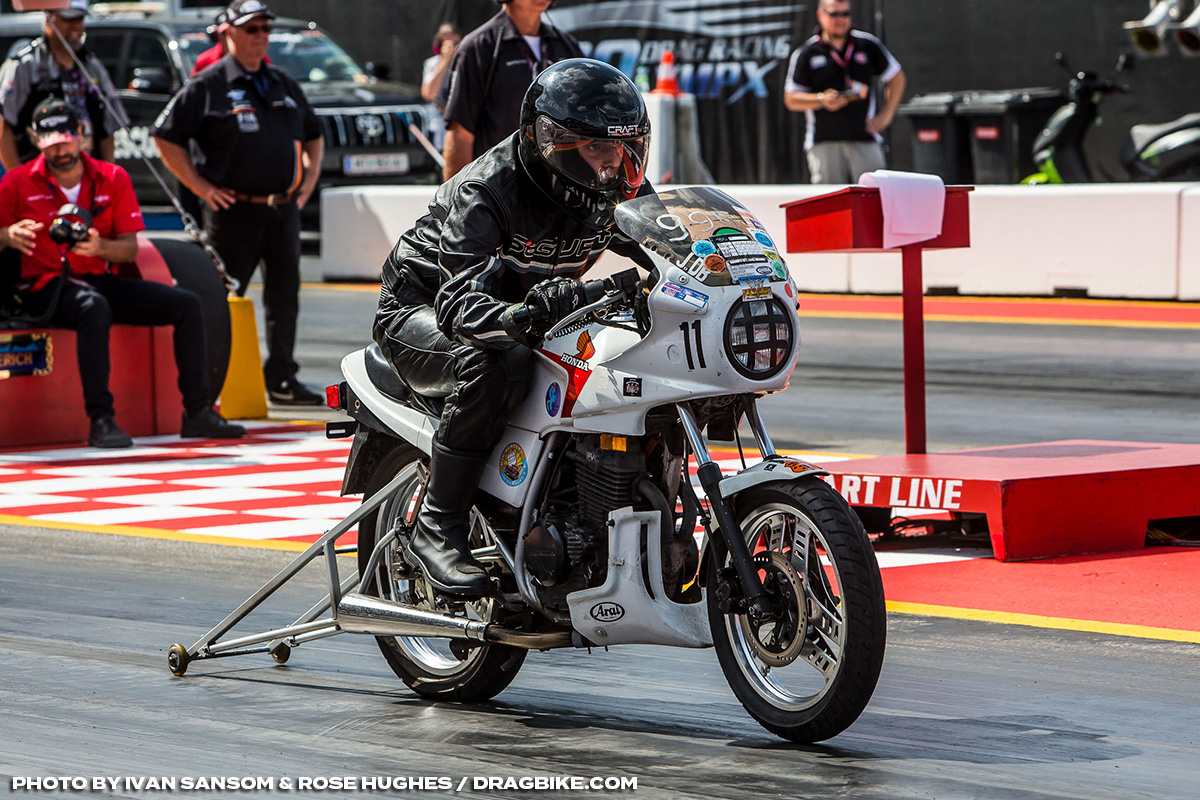