Despite a weekend presaged by some doom and gloom about the potential impact of the weather, the 35th edition of the NitrOlympX ran through to a successful conclusion on Sunday.

Rikard Gustafsson prevailed over the four bike field continuing his low six second consistency over the weekend to the very last and easily covering final round opponent Rene van den Berg with a 6.089/246.53 to a wayward 6.586. With the event win the Swede adds a fourth NitrOlympX title in a row to the expanding trophy cabinet at RG Engineering in Falkenberg and will be looking to head off van den Berg in the points chase at Santa Pod in a couple of weeks’ time.

With that out the way a 6.380/211.82 accounted for Roman Sixta (the Czech rider bouncing back from a hideous crash in Finland last year) and then Samu Kemppainen with a 6.352/205.41 in the trophy runoff. With Martijn de Haas falling to Kemppainen at the semi-final stage and a paucity of entries at the European Finals, we’re pretty sure that Christiansen will have a firm grasp on his third FIM-E championship in a row. 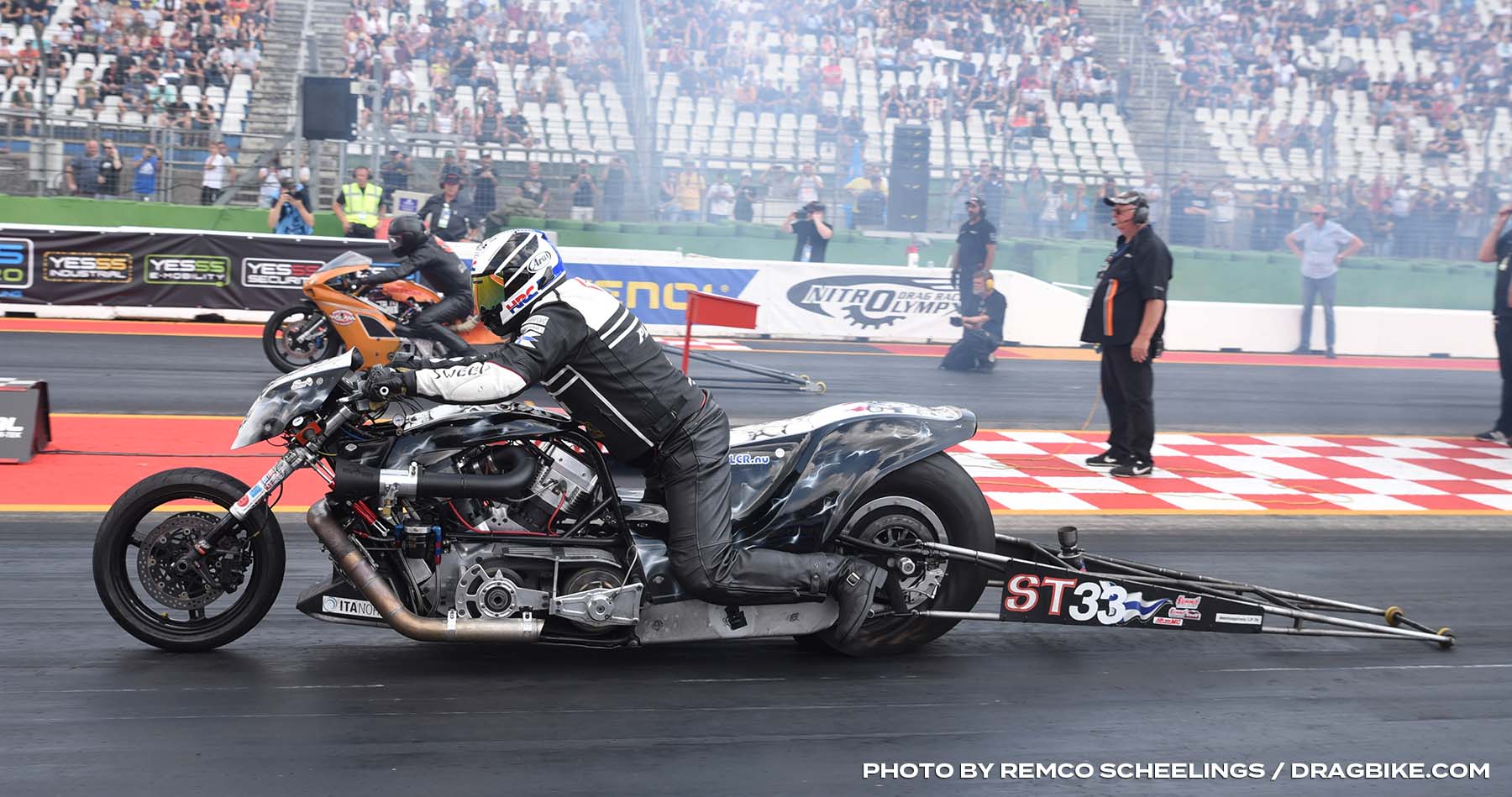 The Pro Stock Bike ladder saw some head scratching throughout, with Bertand Maurice going out from pole position when his mount died off the start-line allowing alternate Aswin le Noble to take his first FIM-E win light. On the bottom side of the ladder, Martin Newbury and Charalambos Bousinis synchronized their stumble off the line and started a push race to the finishline that saw overly zealous assistance from the track crew meaning Newbury’s effort to there first came to naught.

Skipping over all of that, the trophy match up was between Pavlos Sidiropoulos and a rejuvenated Karl-Heinz Weikum with the latter adding his second FIM-E event win in front of his home crowd with a 7.323 low ET of eliminations.

Jake Mechaell Mathias Bohlin looked to be odds on to take his first NitrOlympX title when he hit a 6.964 and a 6.891 in the opening two rounds of eliminations to put him in the final against Mathias Bohlin who had qualified behind Mechaell yesterday.

Bohlin journey through the lower half of the ladder came with a 6.996 (over alternate Steve Wood, the British veteran in his last appearance at the NitrOlympX) and Dániel Donát Lencsés with a 7.1 over a spinning nine second pass from the Hungarian. Lencsés appeared to have overcome his repeated woes with class best numbers 6.796/219.40 to take out Mogens Lund’s 7.012 in the match up of the opening round before the off the line slippage reappeared in the semis.

The spinning blues then descended on Mechaell in the final who slowed to a 7.9 while Bohlin’s 7.0 lit the win light. The Swede will be at the Euro Finals and in with a championship shout despite being an event down on a lot of the field.

Hollie King worked her way through the Junior field defeating a breaking out Geeuwke Siersema in the final to pick up her second event win in succession and looks to have a lock on her first Junior Drag Bike Cup title going into the final event at Santa Pod in a couple of weeks time. 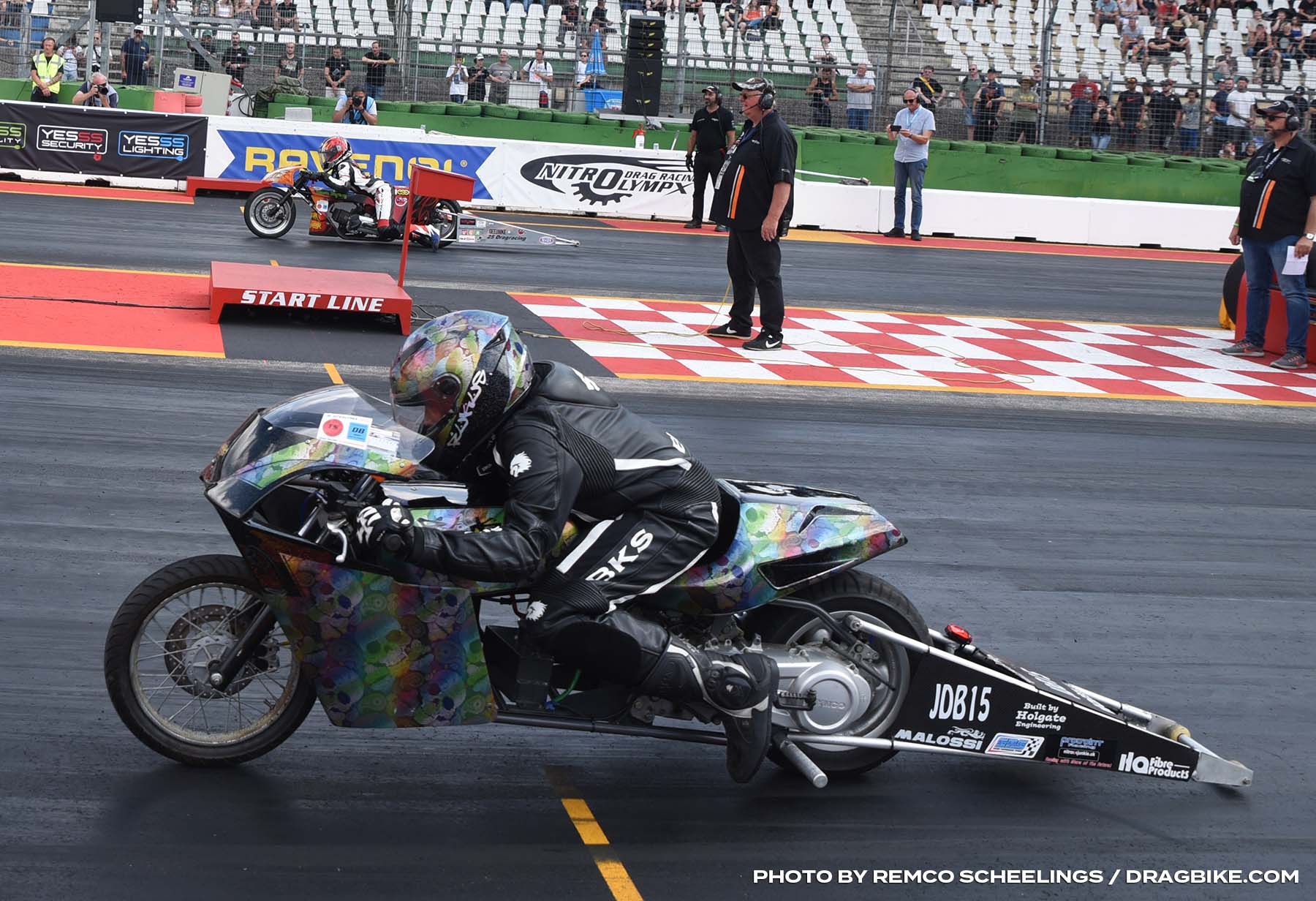 Well the forecast rain didn’t appear and the skipped session yesterday for Top Fuel, Super Twin and Pro Stock Bike was made up for at the end of the day’s qualifying giving each class a full slate of four sessions to make the fields for tomorrow’s eliminations. 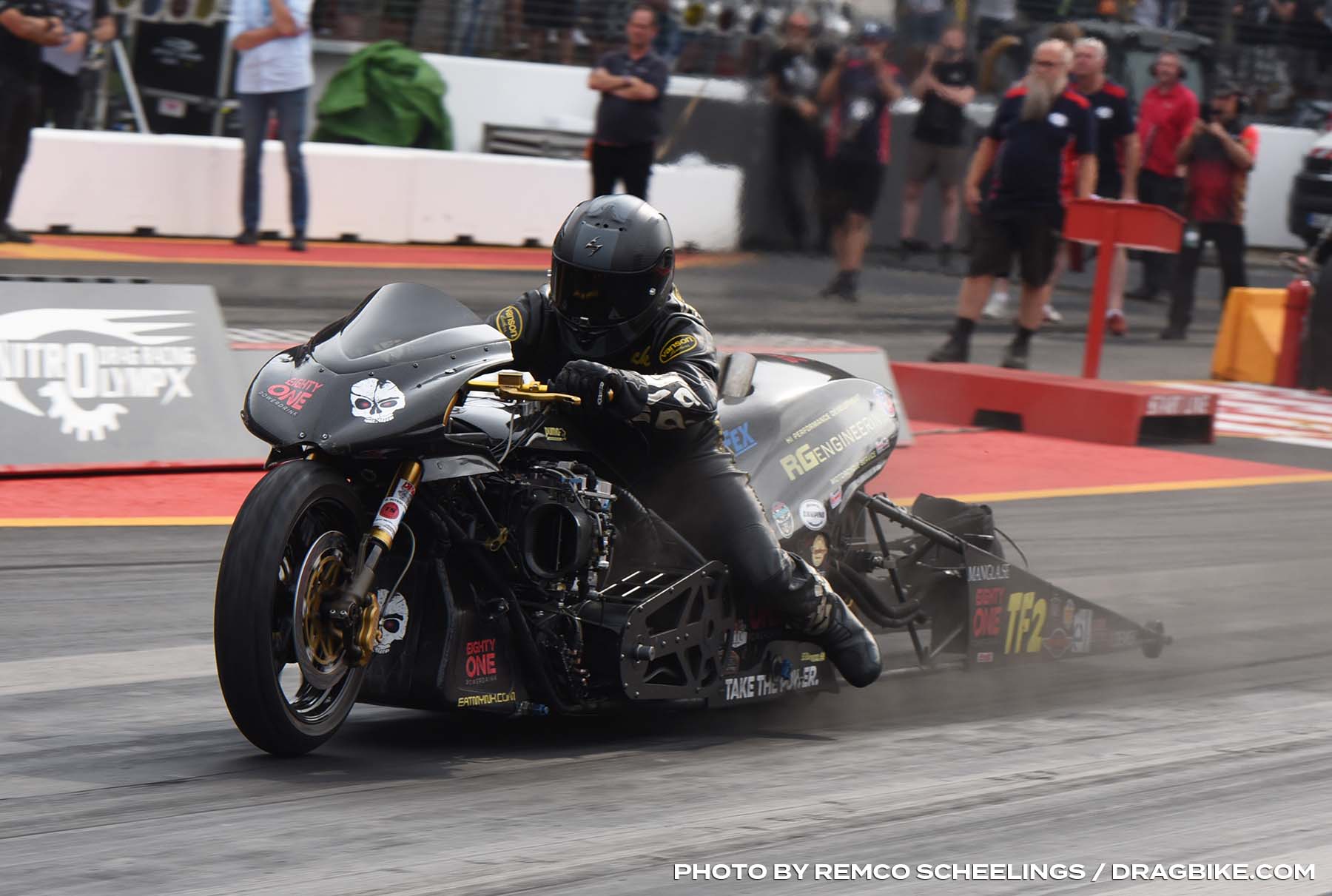 As per yesterday, Rikard Gustafsson maintained his lead over the Top Fuel Bike field improving by a tenth and ten mph from yesterday to hold a 6.042/245 mph low qualifier ticket. Rene van den Berg improved to a 6.461 to drop into second spot ahead of the funny bike pair of Eric Richard (first FIM-E outing on his new Pete Browne chassis) 6.885 and Thomas Pettersson’s 7.0. 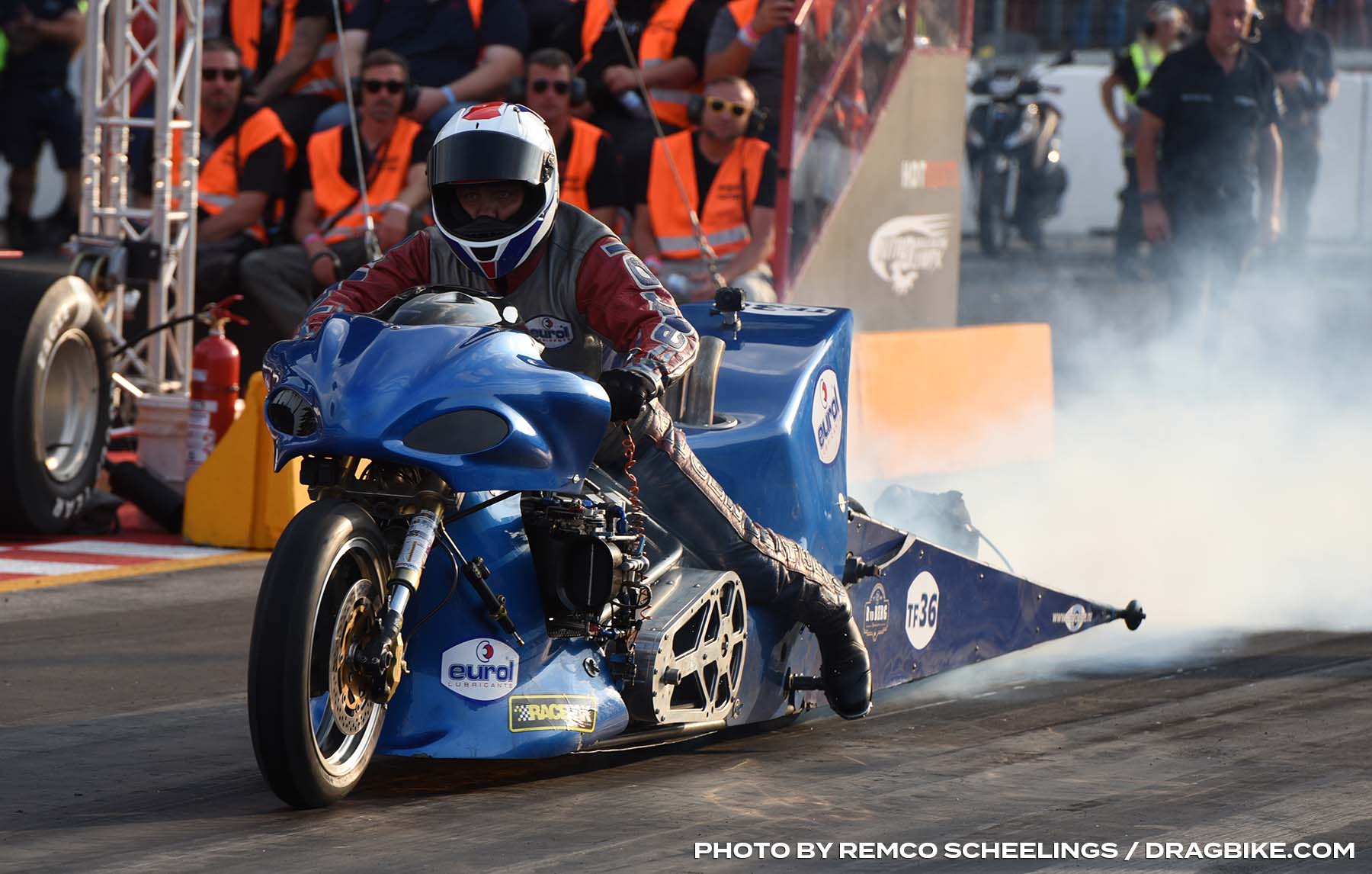 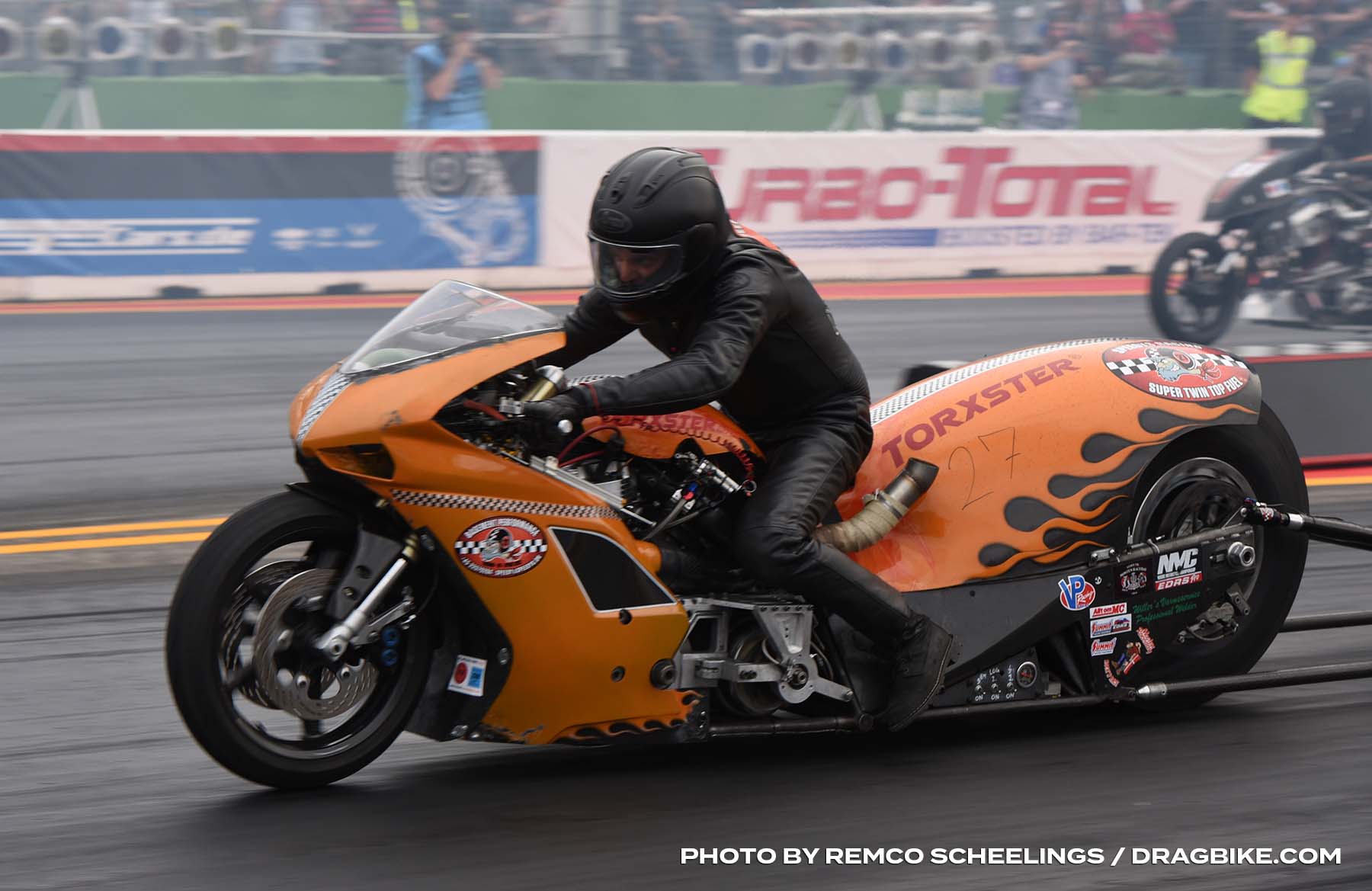 The Super Twin field filled out to an full eight bike ladder today with Marcus Christiansen somewhat inevitably at the sharp end with an improved 6.295 (gaining a tenth like Gustafsson). Martijn de Haas maintains his second spot with a 6.727 with Samu Kemppainen also in the sixes with a 6.961 from his V60 Skull Racing entry. Roman Sixta, Chris van Nimmen, Juha Hintukainen, Christian Jager and Marc van den Boer should complete the field for tomorrow. 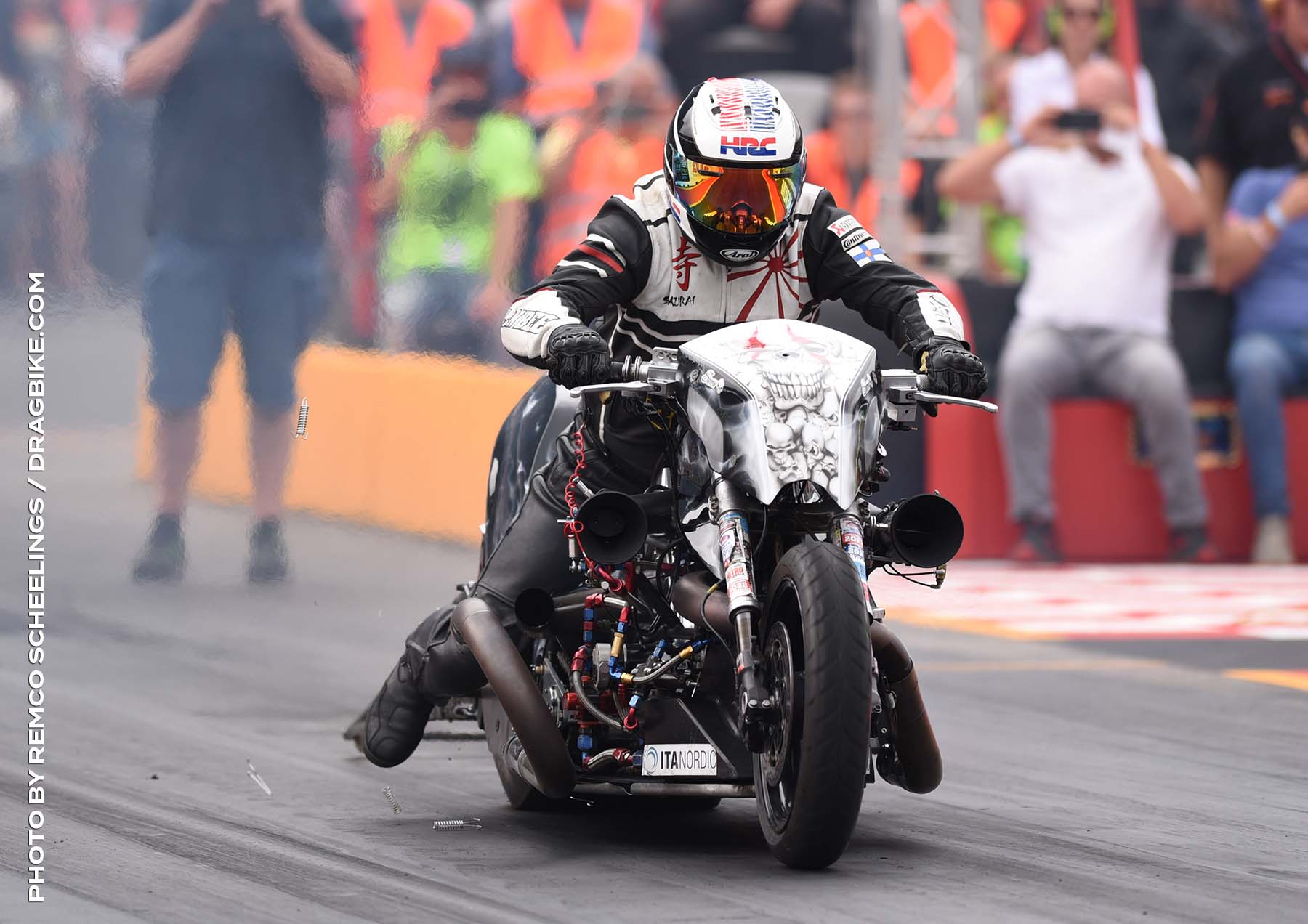 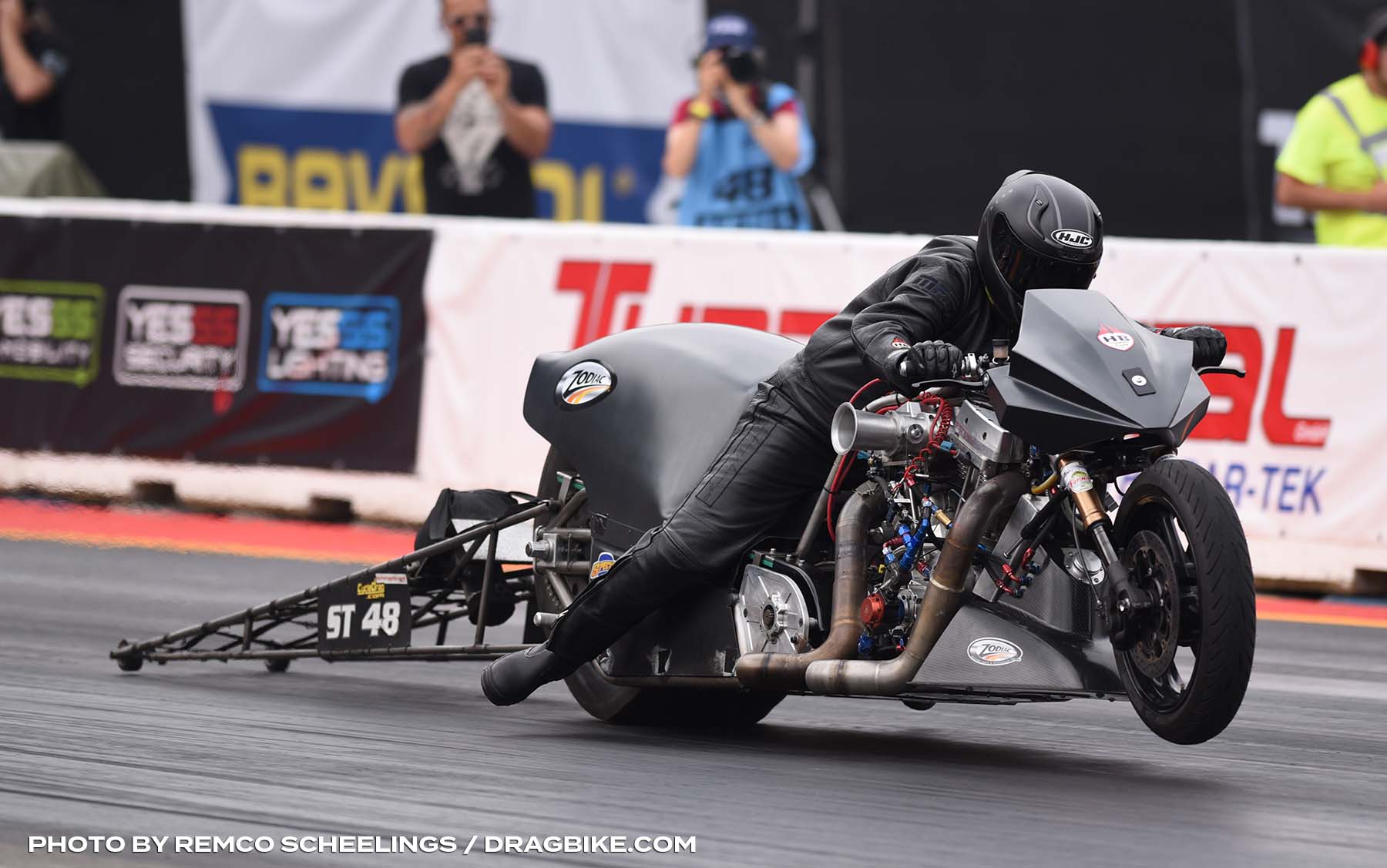 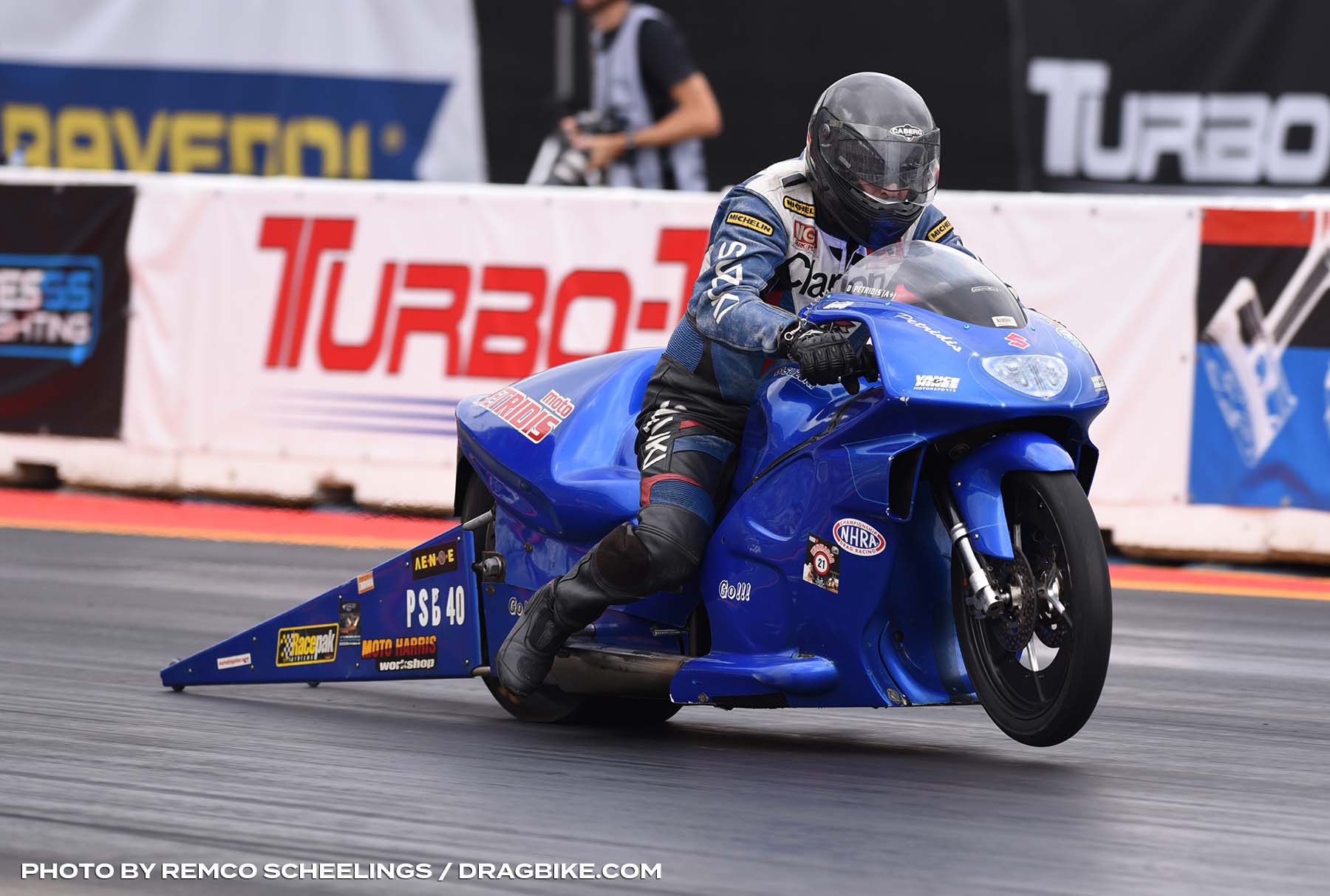 Today saw some quite prominent shake-ups in the qualifying order in Pro Stock with Bertrand Maurice leaping to the top with a 7.234 on his only decent pass of the event so far with a Greek triumvirate of Dimitrios Petridis, Charalambos Bousinis and Pavlos Sidiropoulos rounding out the top half of the field. 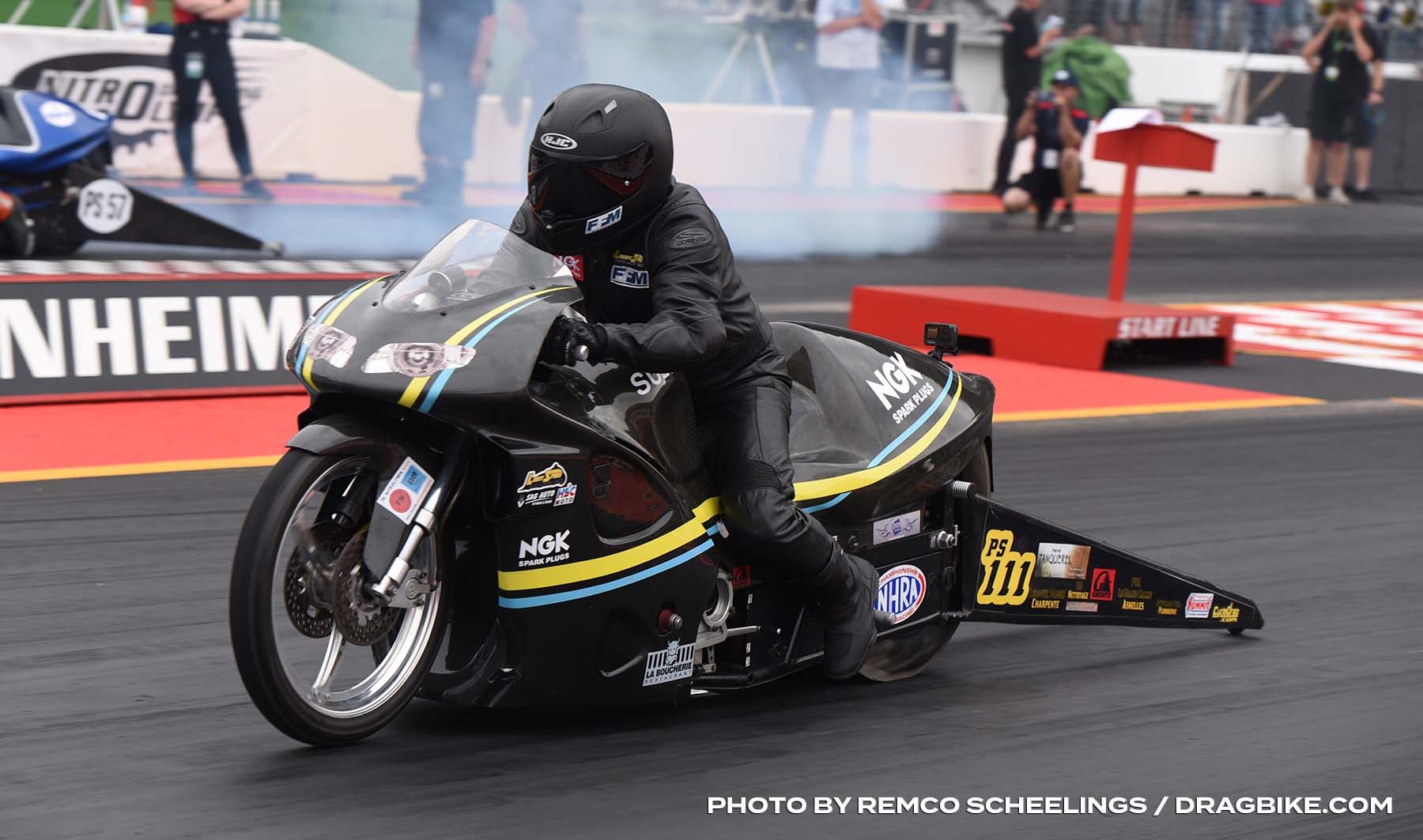 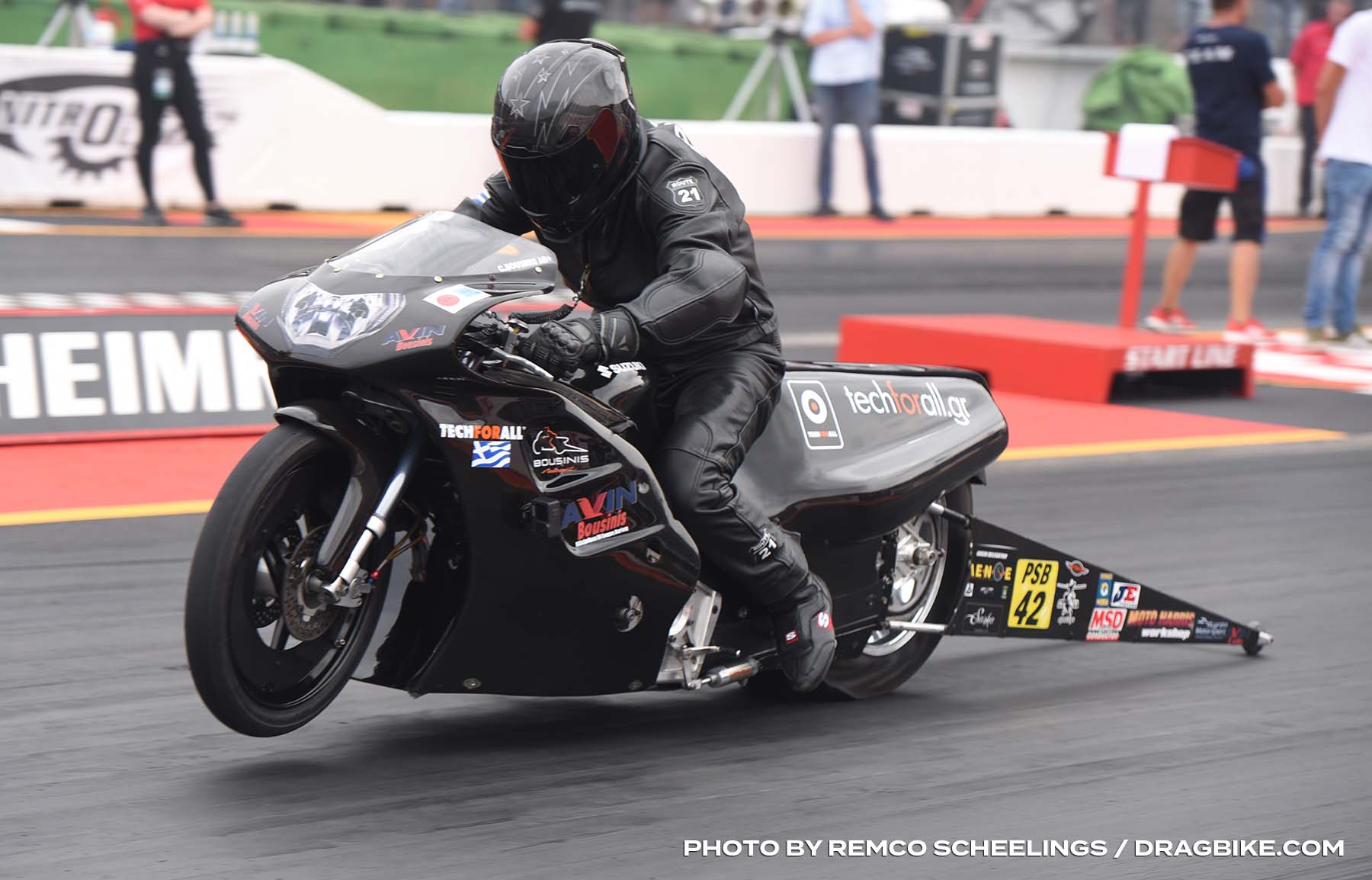 Points leader Martin Newbury on a rent a ride from Richard Gipp’s Pro Stock emporium managed to get into the field at the expense of Aswin le Noble riding a bike tuned by Gipp. 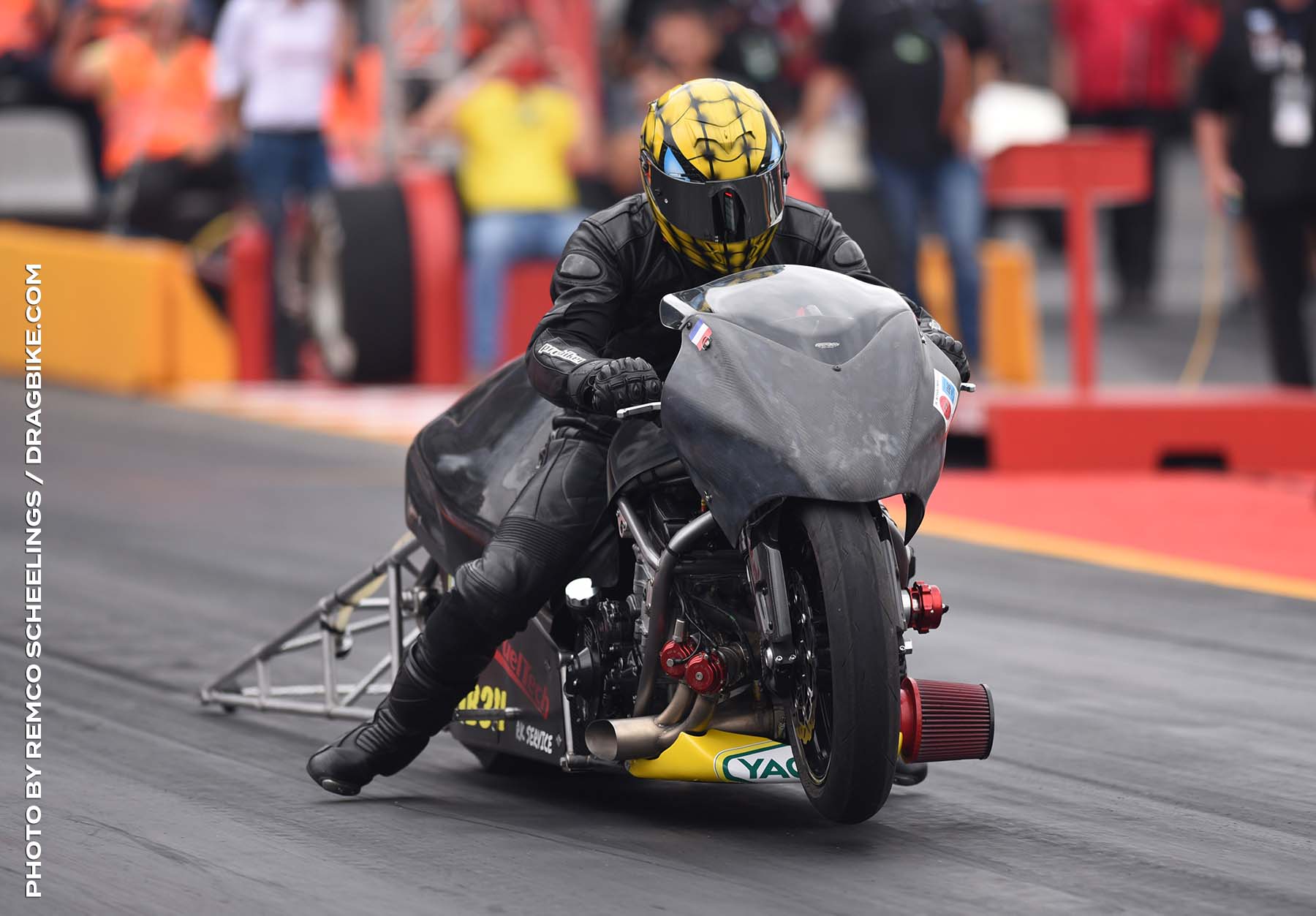 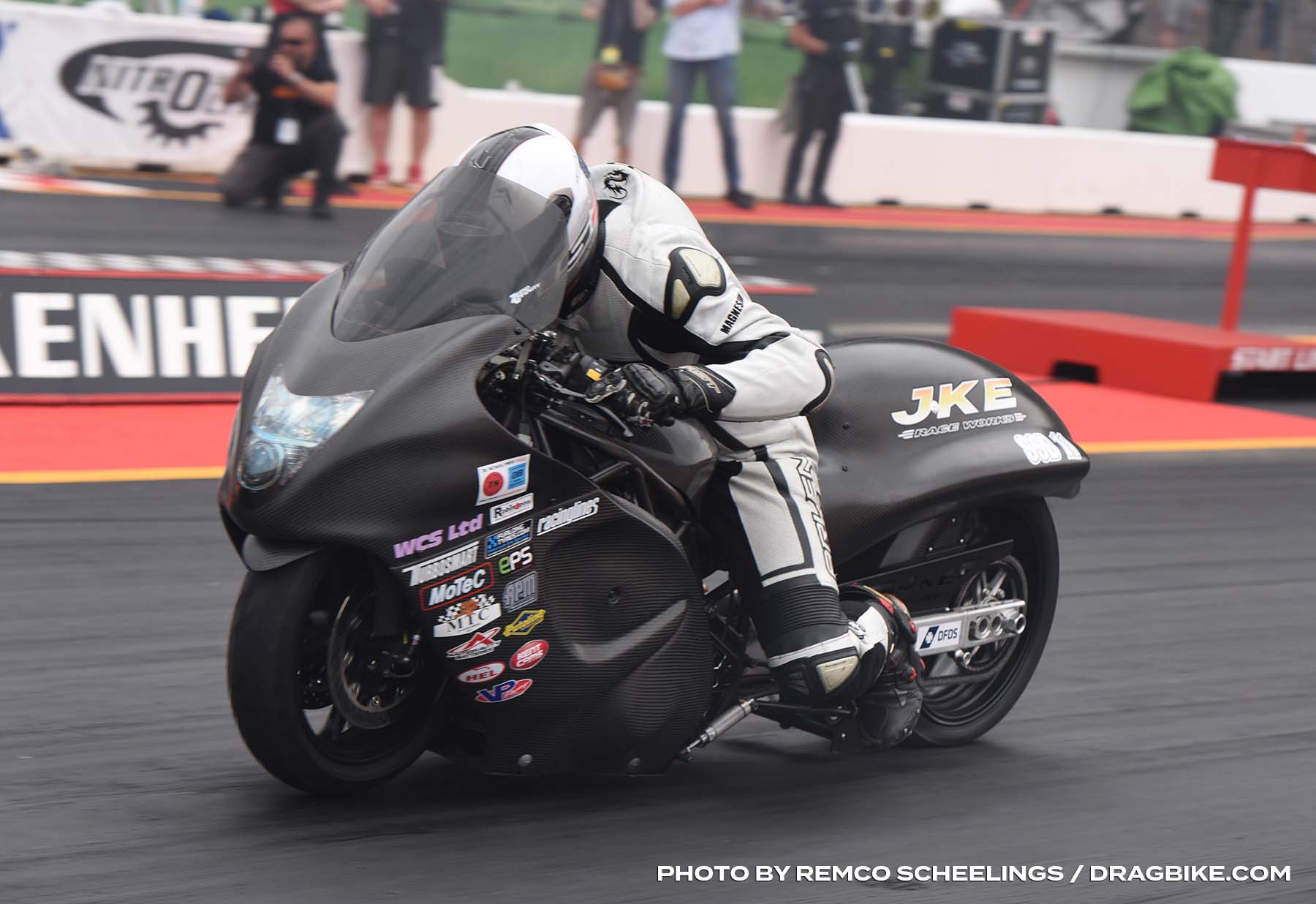 Jake Mechaell zoomed to a 6.959/212 to improve on yesterday’s pole sitter with Mathias Bohlin swapping spots with Mogens Lund with a 6.977 from the Swede while the Dane bettered his ET from yesterday to a 7.027. 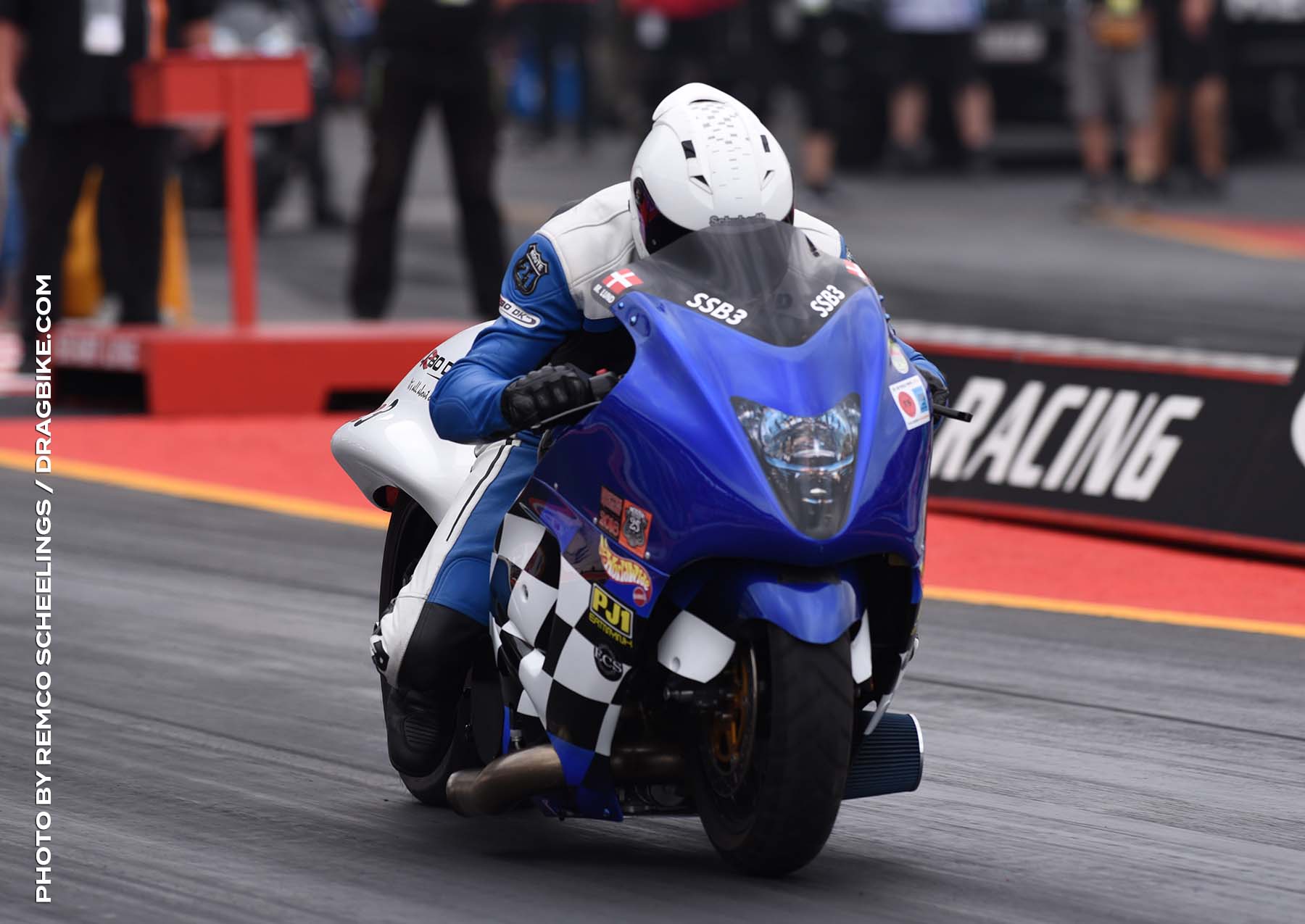 An eight bike bump spot sits at Ricardo Grauer’s 7.8 and we’ll guess that that will be the ladder for tomorrow with three competitors on the outside, but you never know. One who will definitely be racing tomorrow is Dániel Donát Lencsés who will be thankful that his mid seven was enough to get into the field although the rest of his spinning passes are some way off the championship grade at the moment. 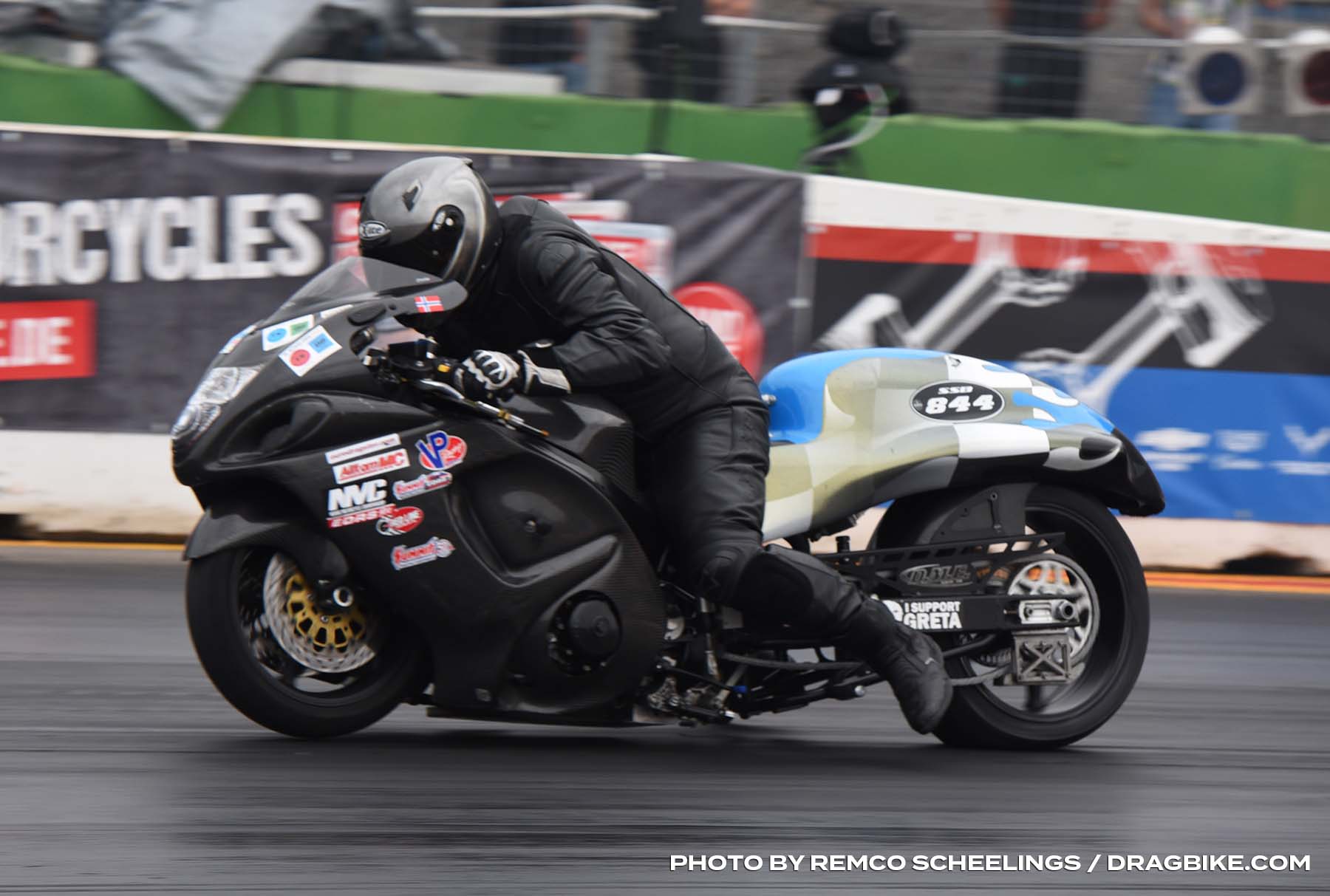 Marie Madleen Rosen managed to get closer to her dial-in with a +0.028 on a 8.59 dial-in in the second session and maintain her lead over the rest of the field and was closest to dial-in in both of today’s sessions suggesting she will be tough to defeat in tomorrow’s eliminations.

Tricky conditions for the opening day of the 35th NitrOlympX, the largest drag racing event on the European main land with tens of thousands of tickets pre-sold for the meet. Spin and slip were notable by words coming out as the very fresh (the track hasn’t been used since 2019) surface took a bit of time to bed in with a secondary race against precipitation that was surrounding the track during the late afternoon and eventually dumped wet stuff to leave Top Fuel and Super Twin Bike without a second qualifier.

With only one session completed, Rikard Gustafsson heads the surprisingly thin Top Fuel Bike field by a considerable margin with a 6.145/235 mph in a skaty opener to handily cover incoming points leader Rene van den Berg’s 6.866 and Eric Richard’s 7.221. Thomas Pettersson has yet to record a time from his Suzuki funny bike. 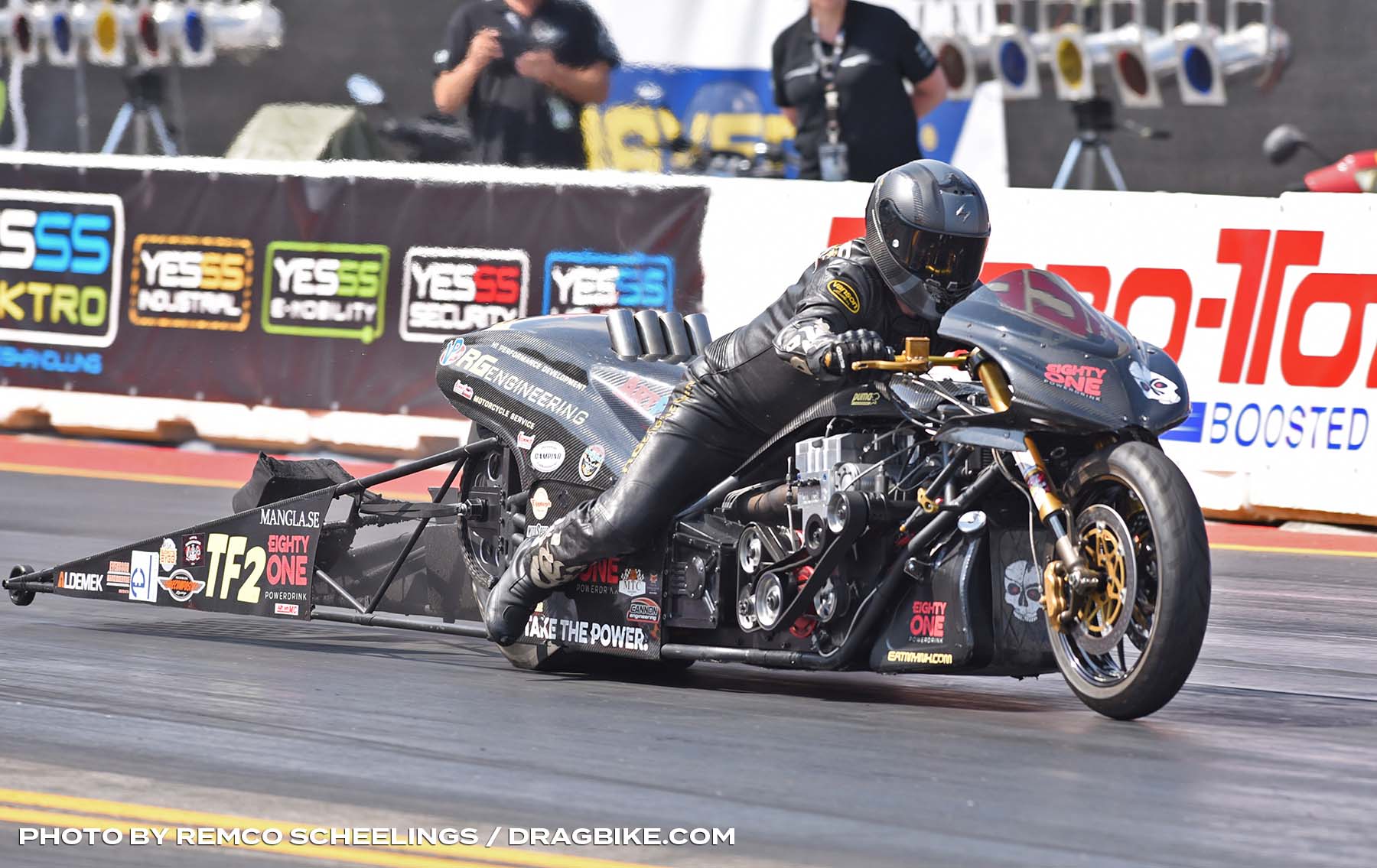 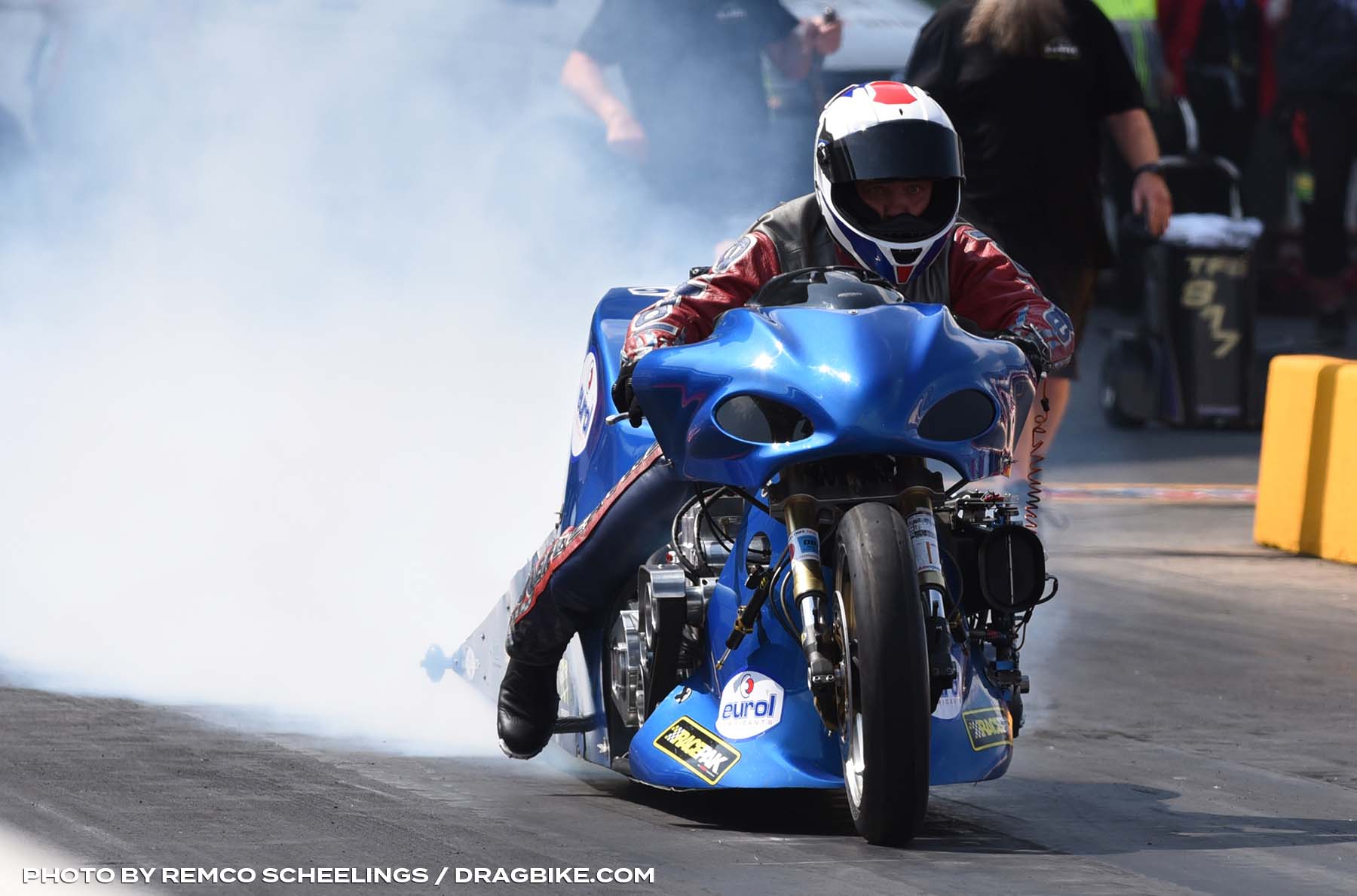 Picking up where he left off in Sweden a couple of weeks ago, Marcus Christiansen is, like Gustafsson in TFB, someway ahead of the six current qualifiers in Super Twin with a 6.393, the Dane noting room for improvement in dialing in the clutch after the single session. 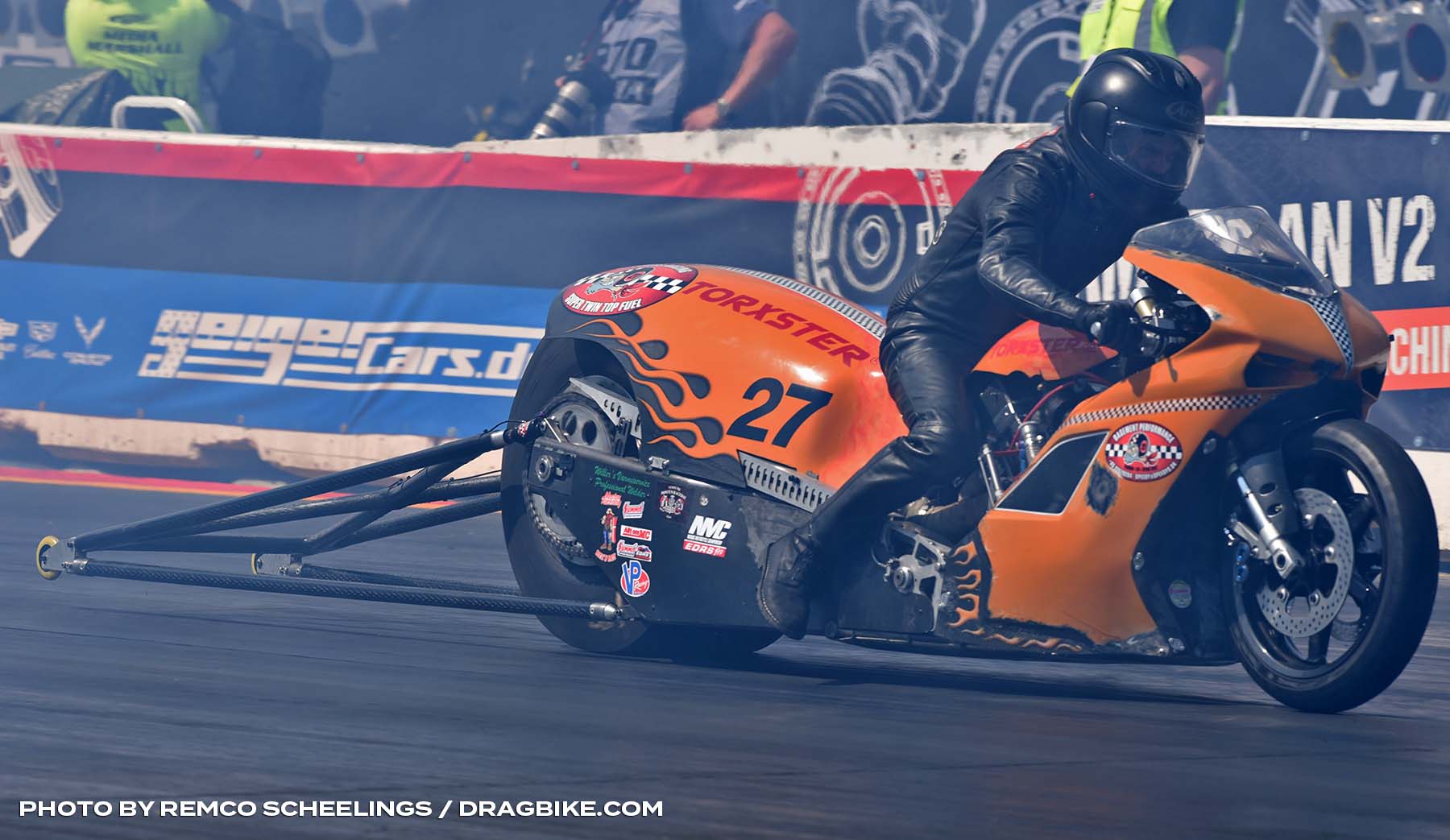 Last seen flaming aluminium across Tierp Arena, Martijn de Haas is the best of the rest with a steady 6.727 and the Dutch team head up Samu Kemppainen’s 6.961, Chris van Nimmen, Juha Hintukainen and Roman Sixta. 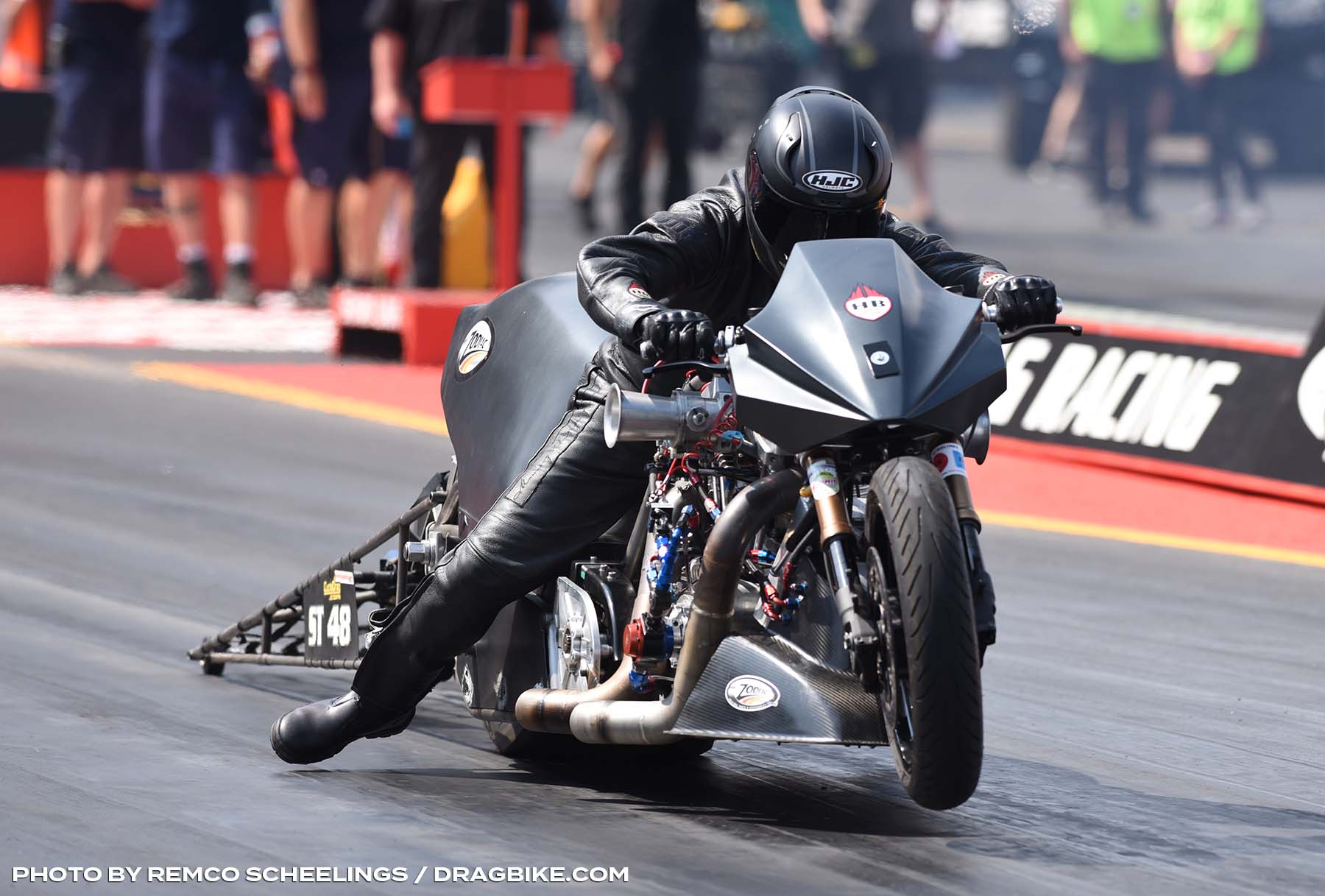 After a paucity of entries at the previous two events, Pro Stock Bike class is always significantly augmented by central and southern European racers at the NitrOlympX and this edition is certainly no exception. Greek riders Dimitrios Petridis and Pavlos Sidiropoulos head the nine qualifiers in mid seven second passes from their Suzuki TLs. 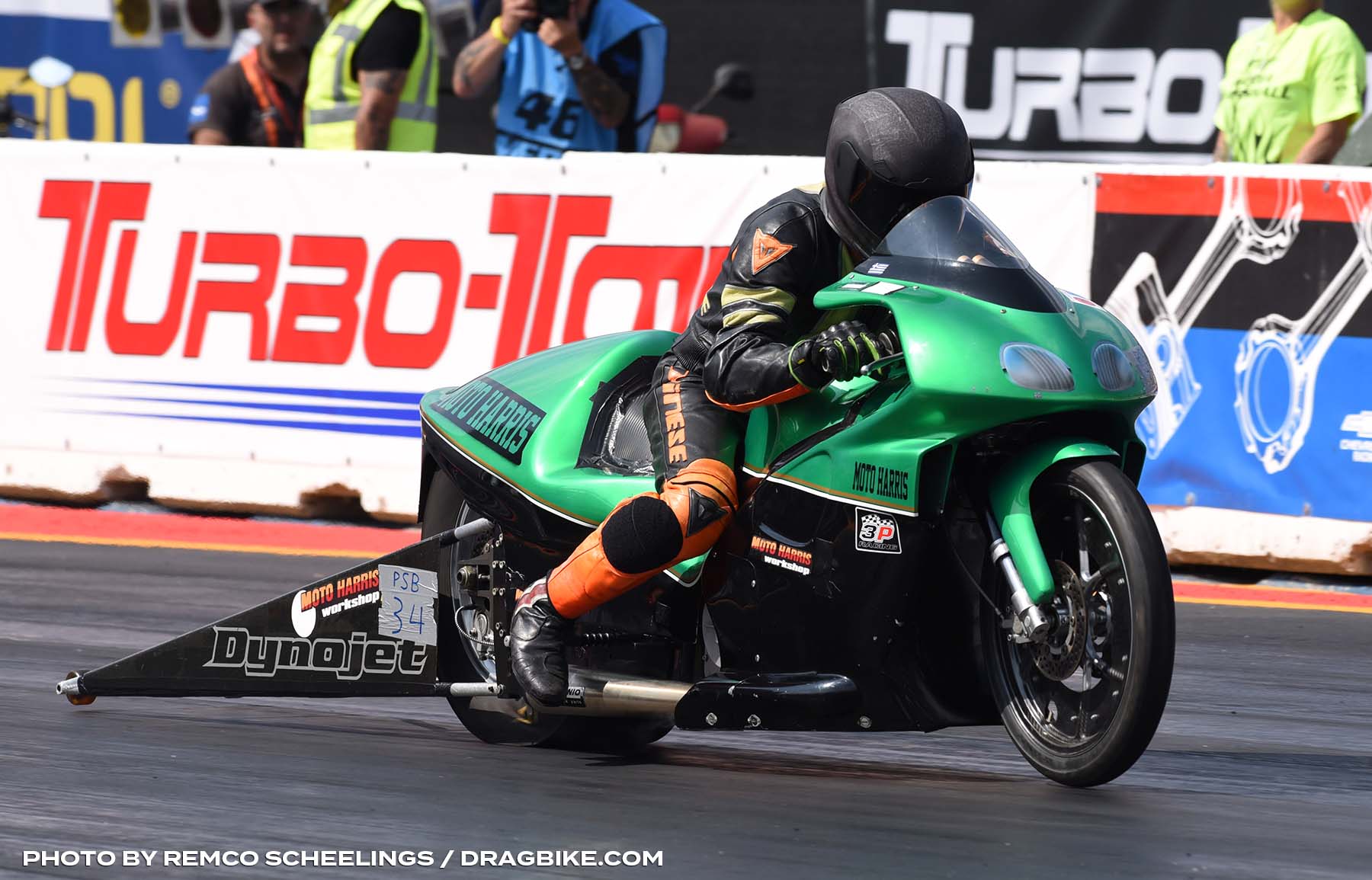 Points leader Martin Newbury is currently outside of the eight bike ladder after clipping the blocks on his second qualifying attempt and will be checking the skies tomorrow. 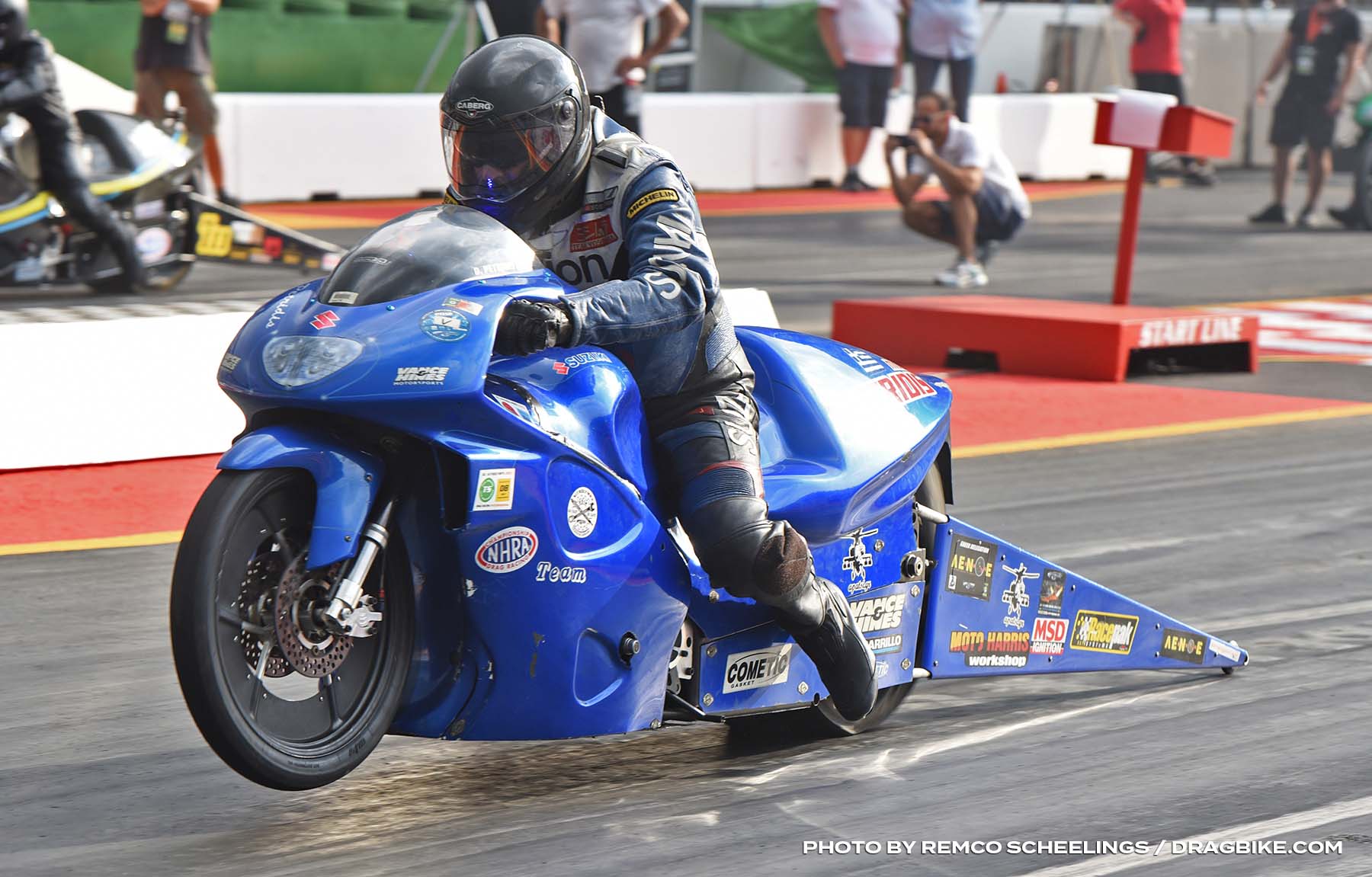 Eleven riders made qualifying on Friday for spots in the Super Street Bike field and after two sessions Jake Mechaell sits on top of the heap with a 7.038/205.88 on his first racing visit to Hockenheim. 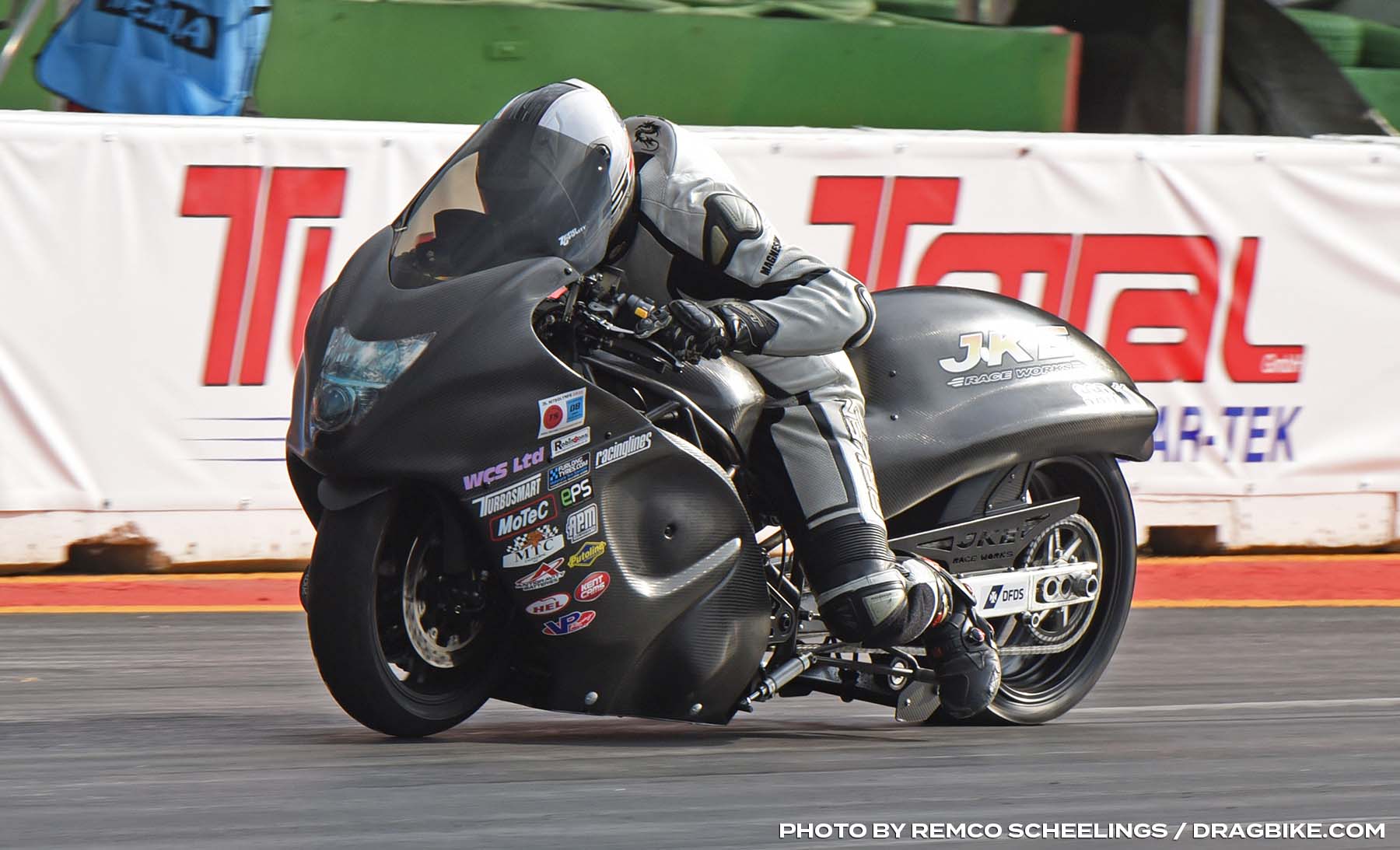 Behind the Brit, Mogens Lund vaulted up the ranks in the second session with a 7.077 to make sure of a spot in the ladder on raceday with the Dane followed by Swede Mathias Bohlin’s 7.136. Whither championship leader Dániel Donát Lencsés? 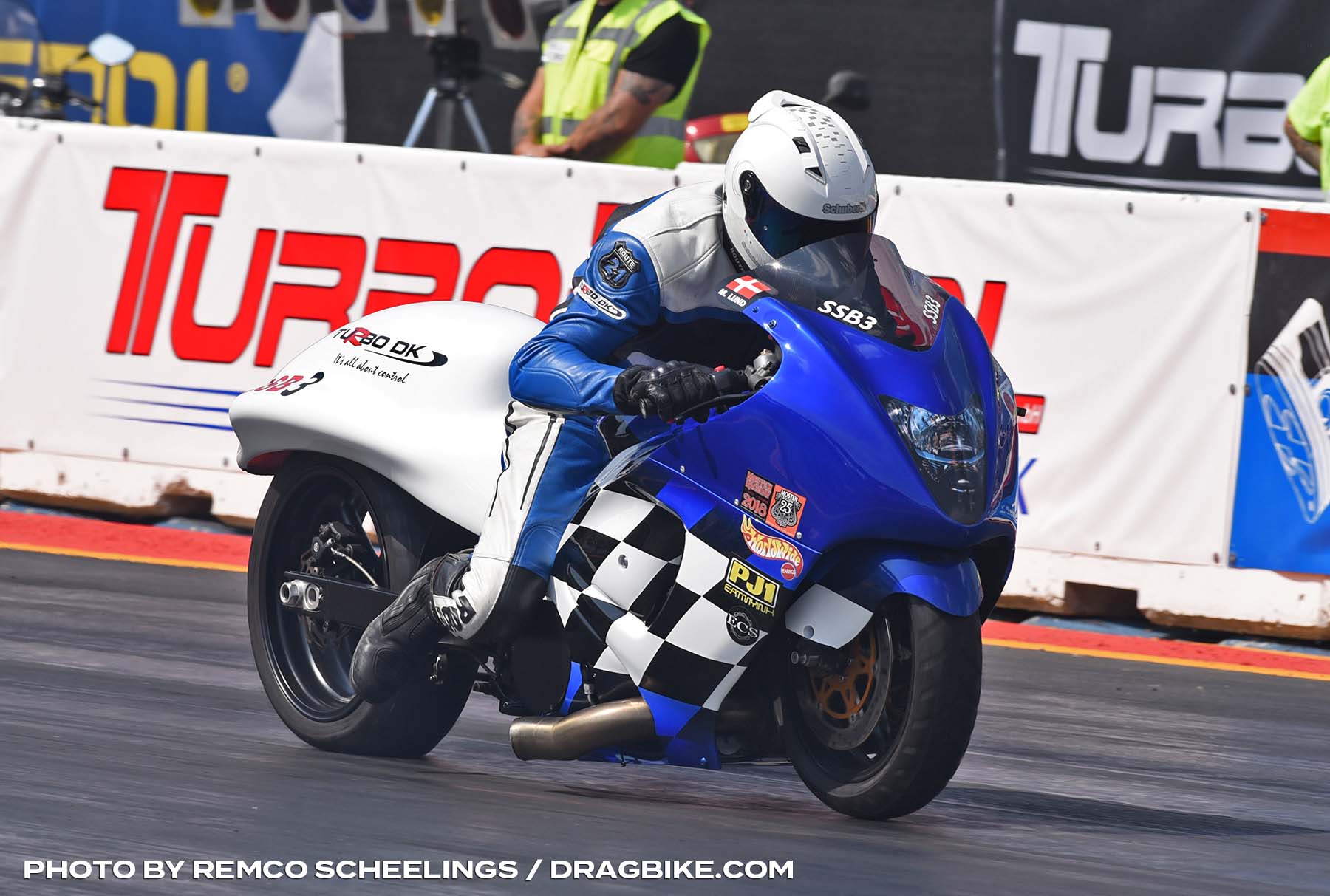 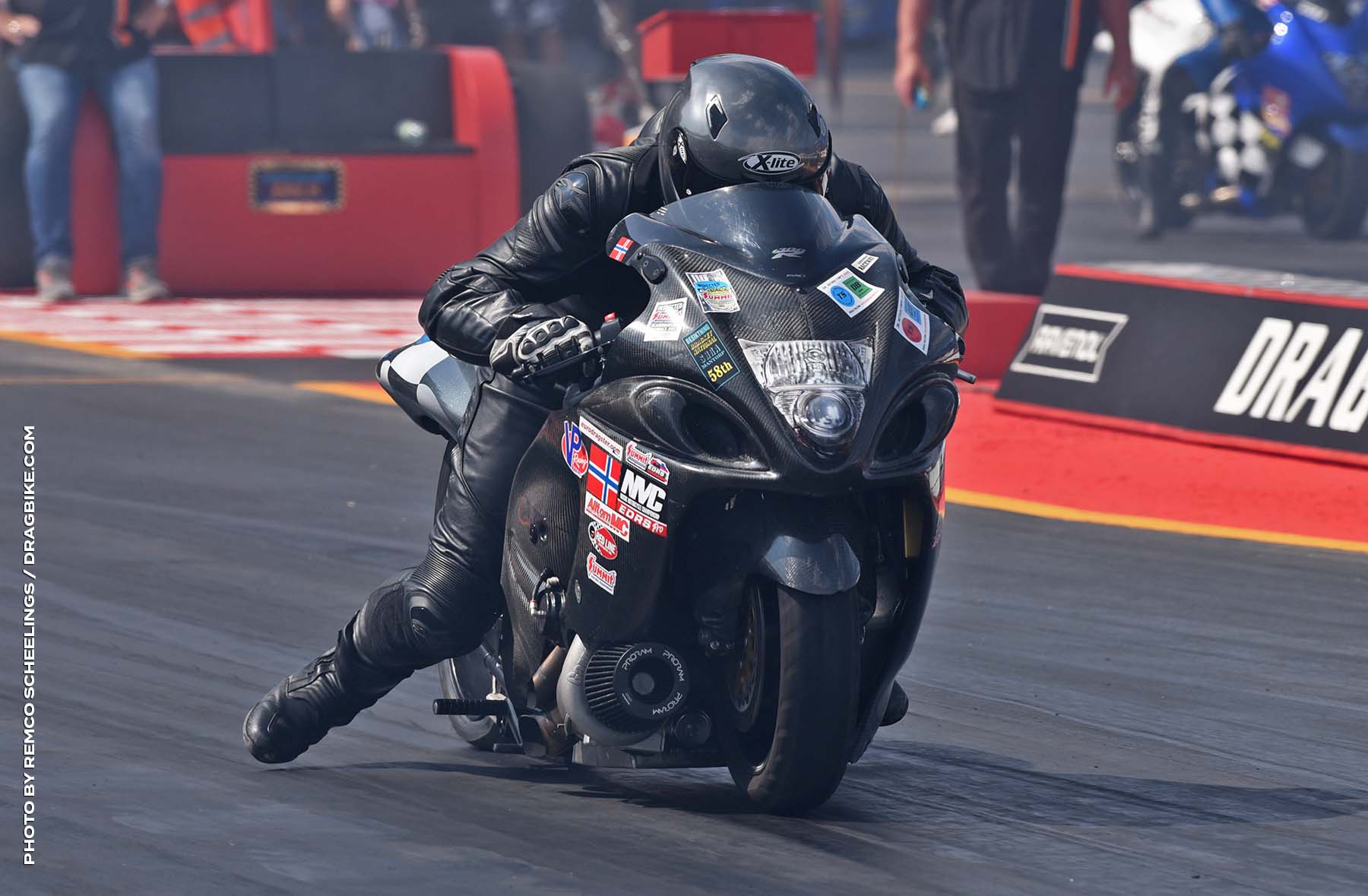 Well the Hungarian was struggling with clutch and gear setup and was spinning to 10th spot which could mean a DNQ if the forecast rain appears overnight and an eight bike ladder is decided on tomorrow.