Championship chases came to a finale this weekend for the Euro Finals at Santa Pod Raceway in England.  Despite a few weather delays and some cloudy skies, the Euro Finals came to a spectacular! You can watch the complete event recap by visiting their YouTube Channel. 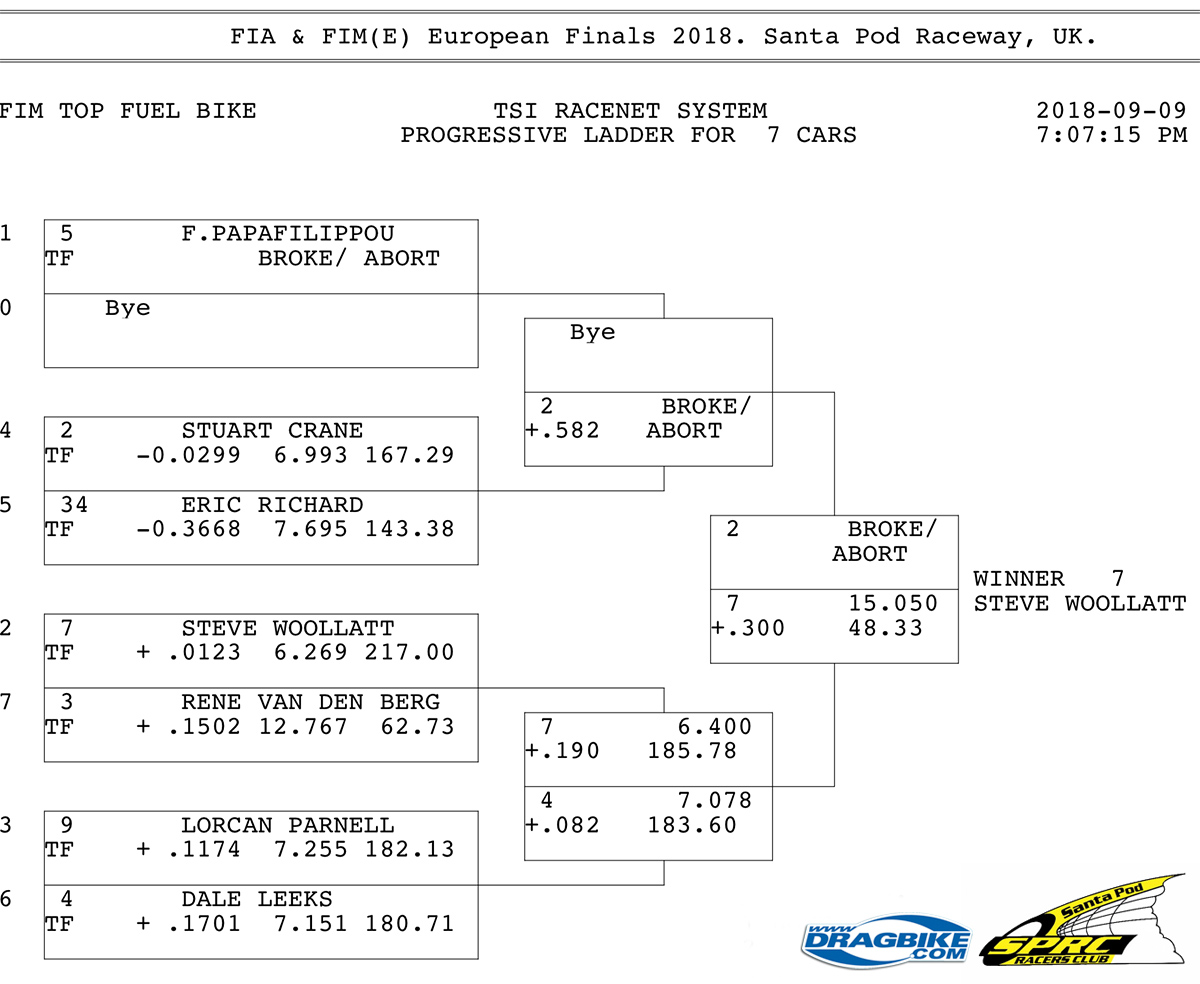 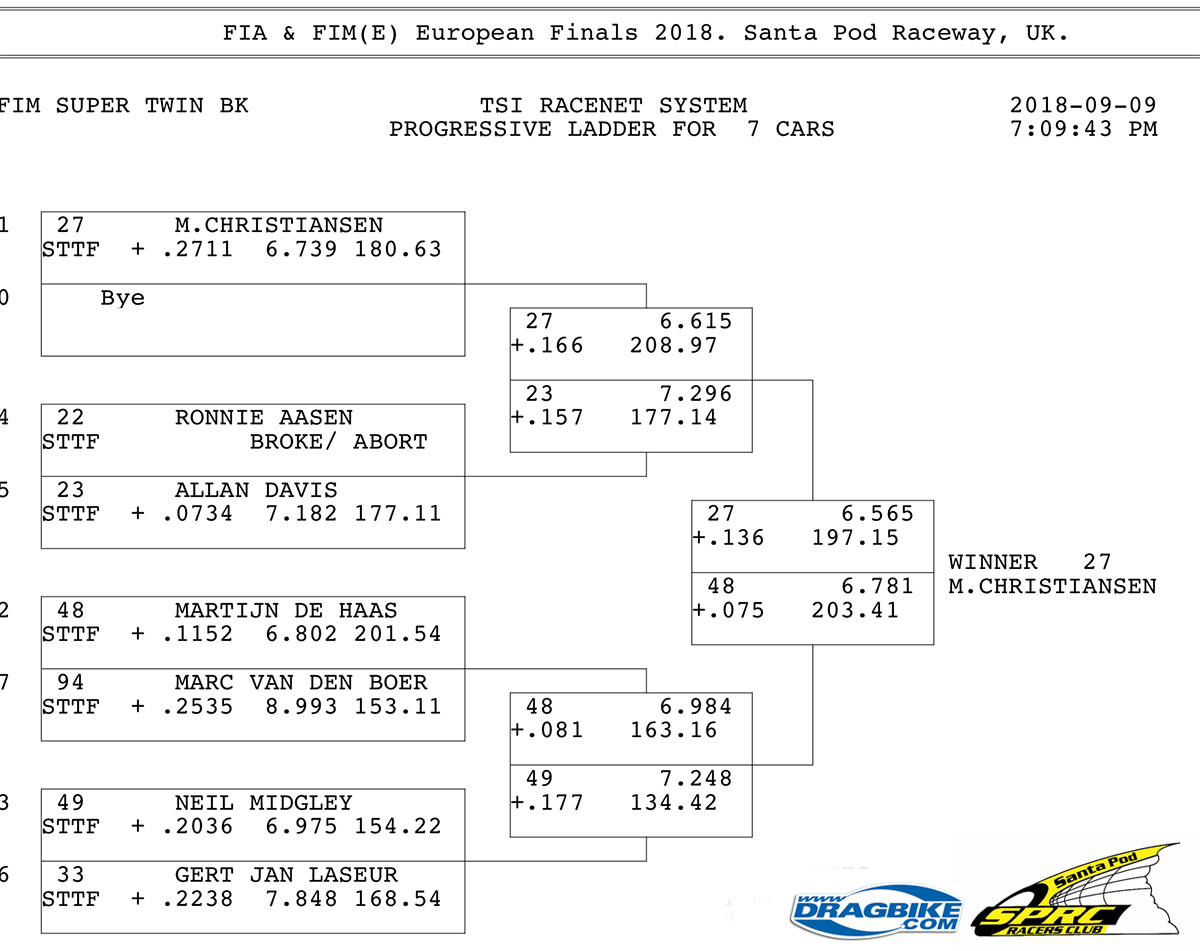 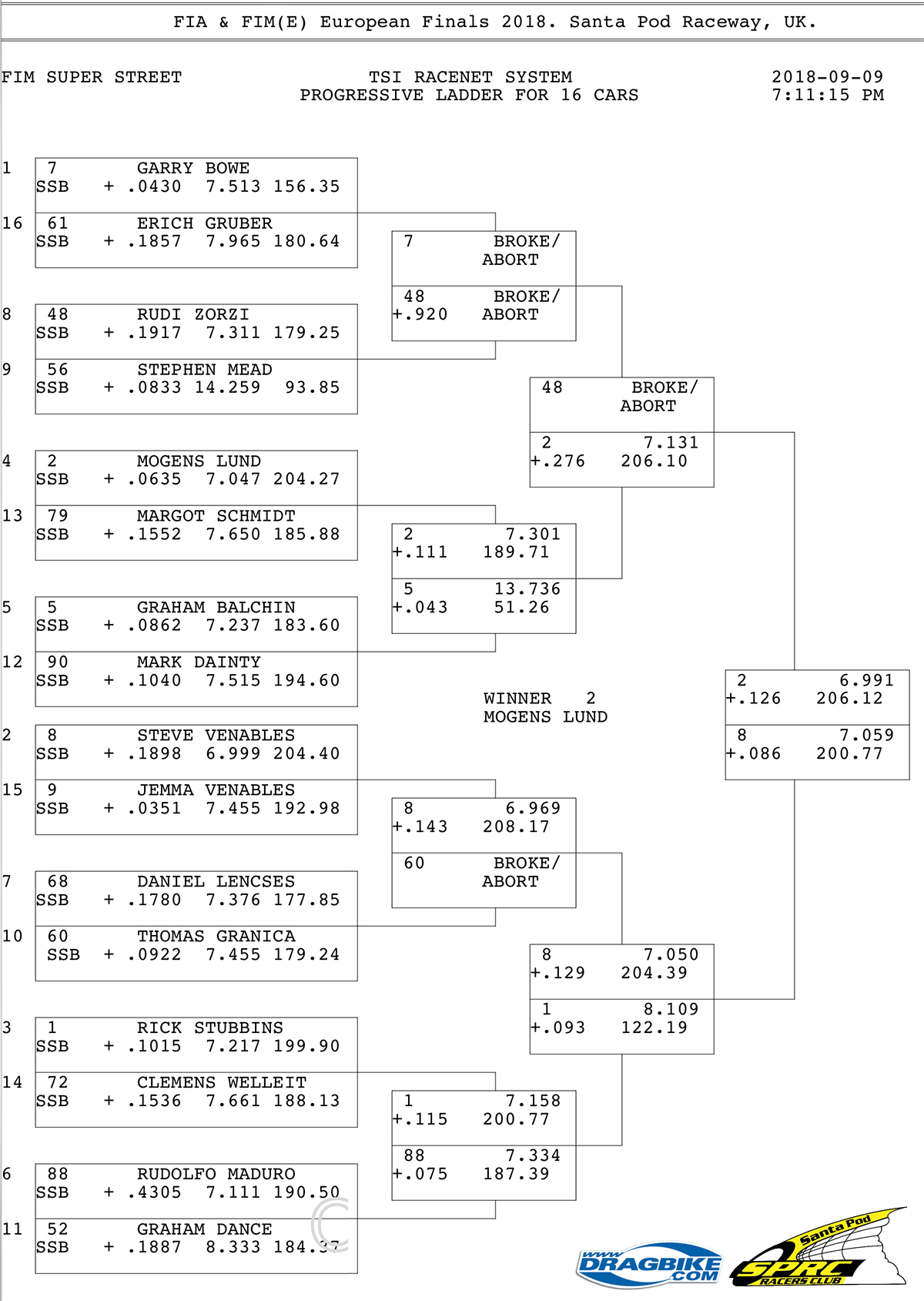 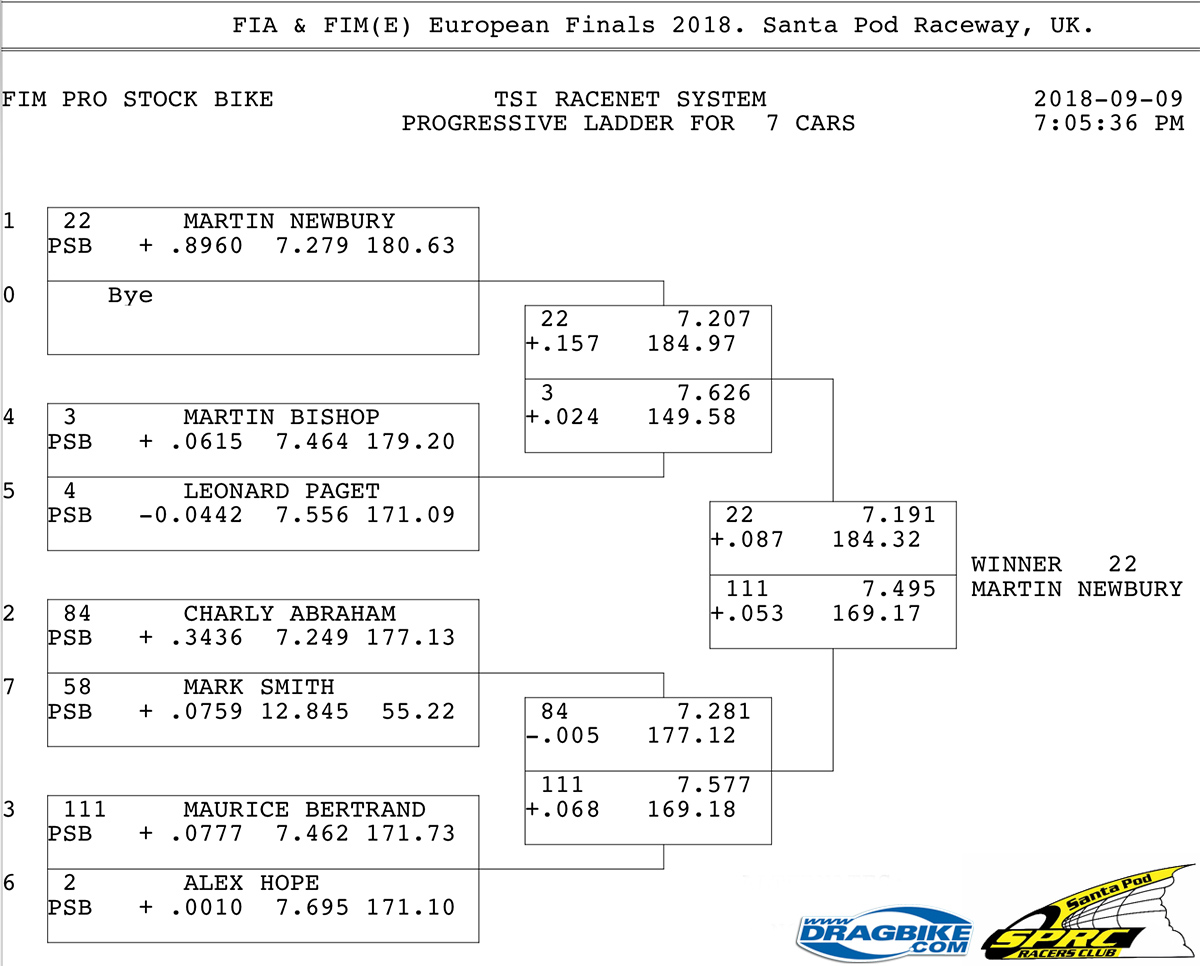 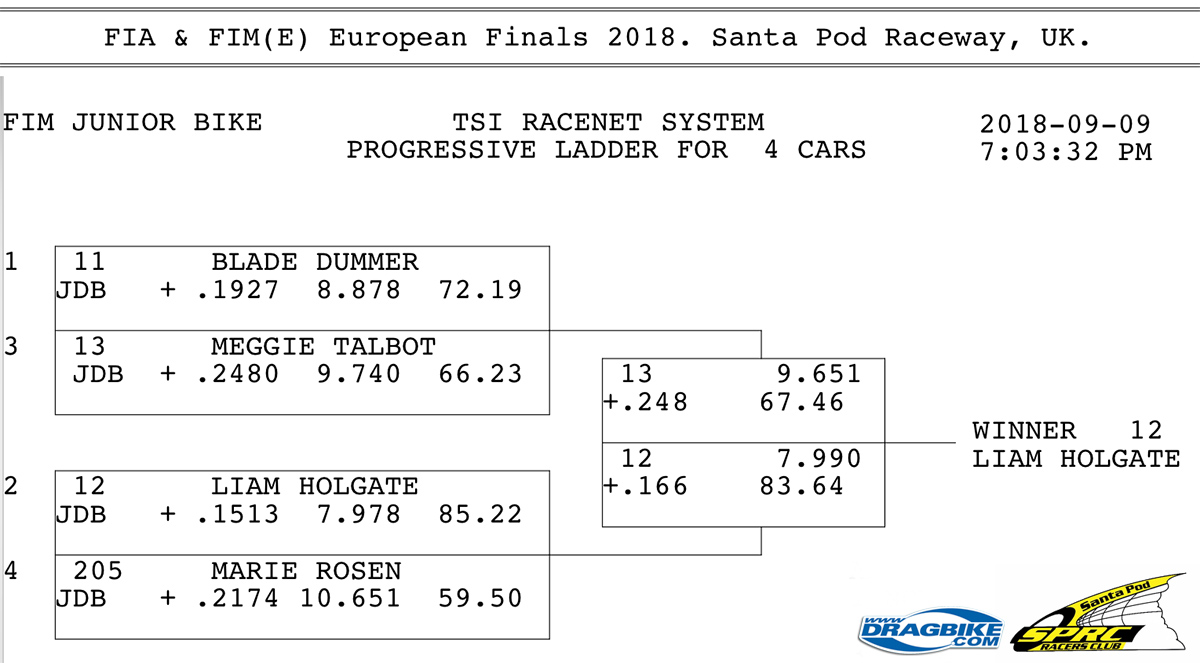 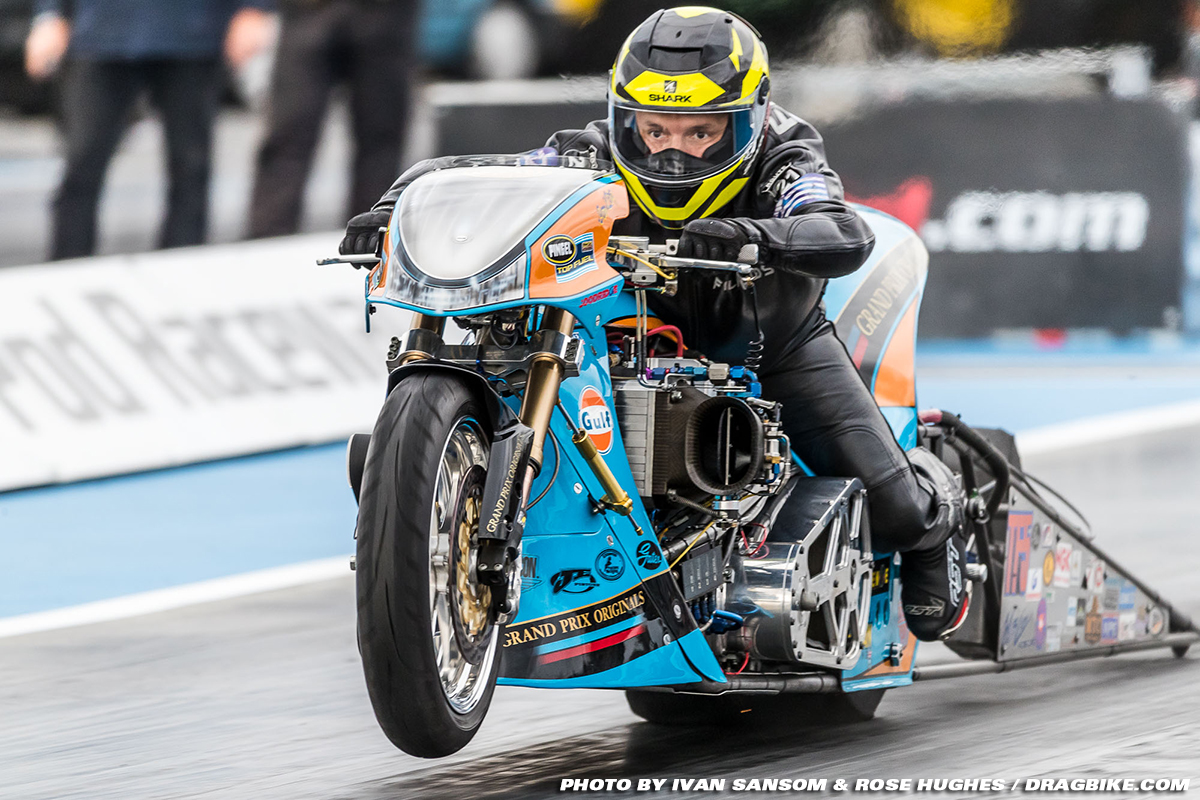 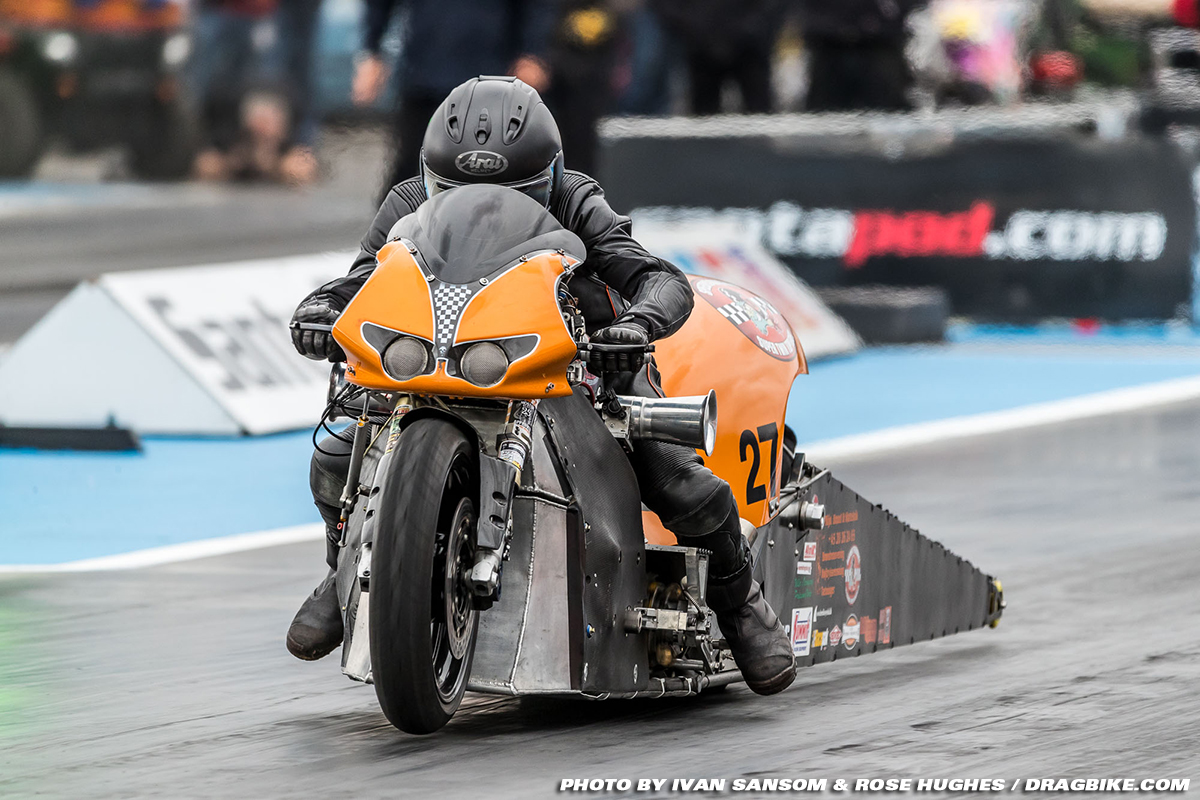 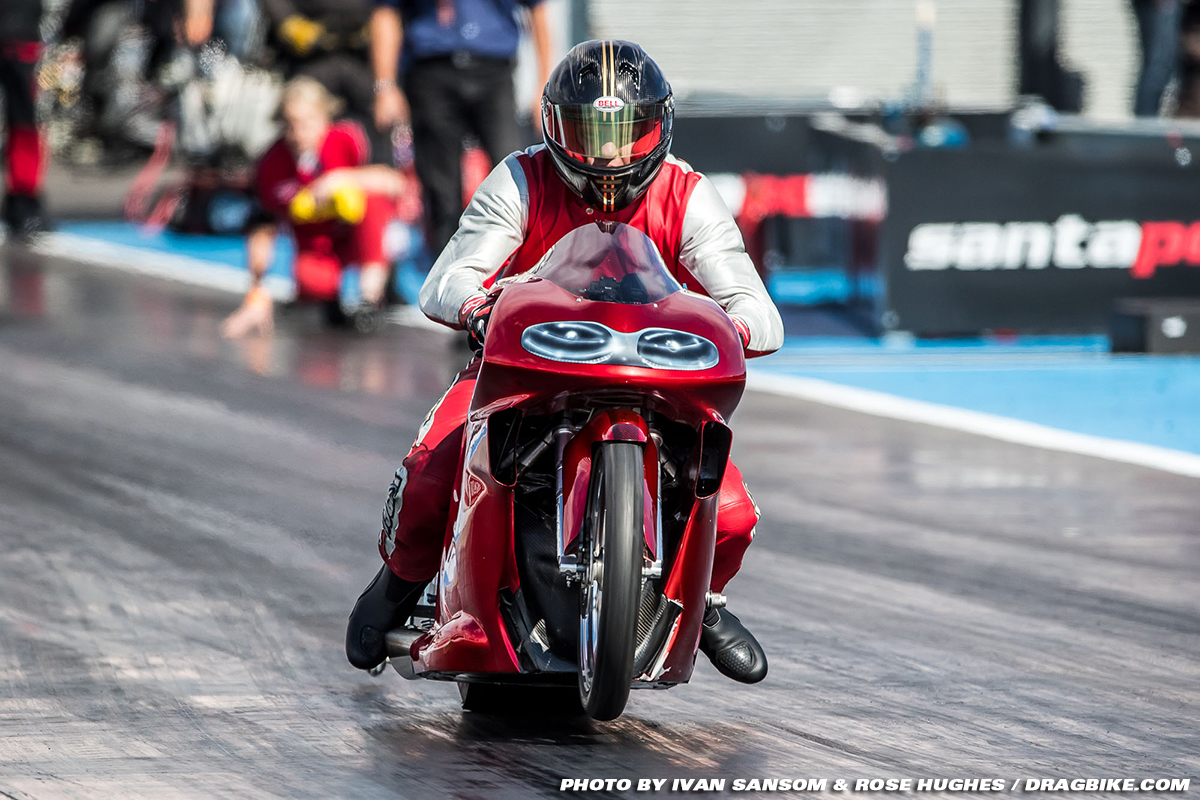 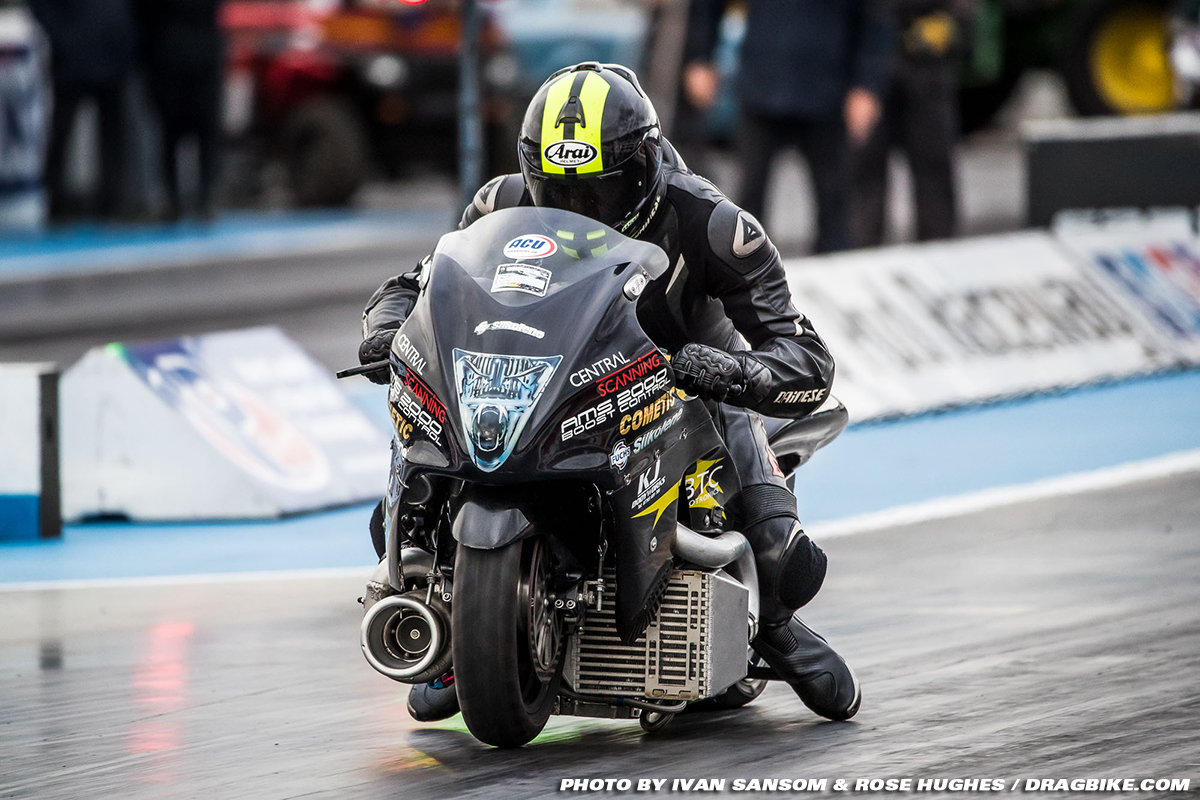 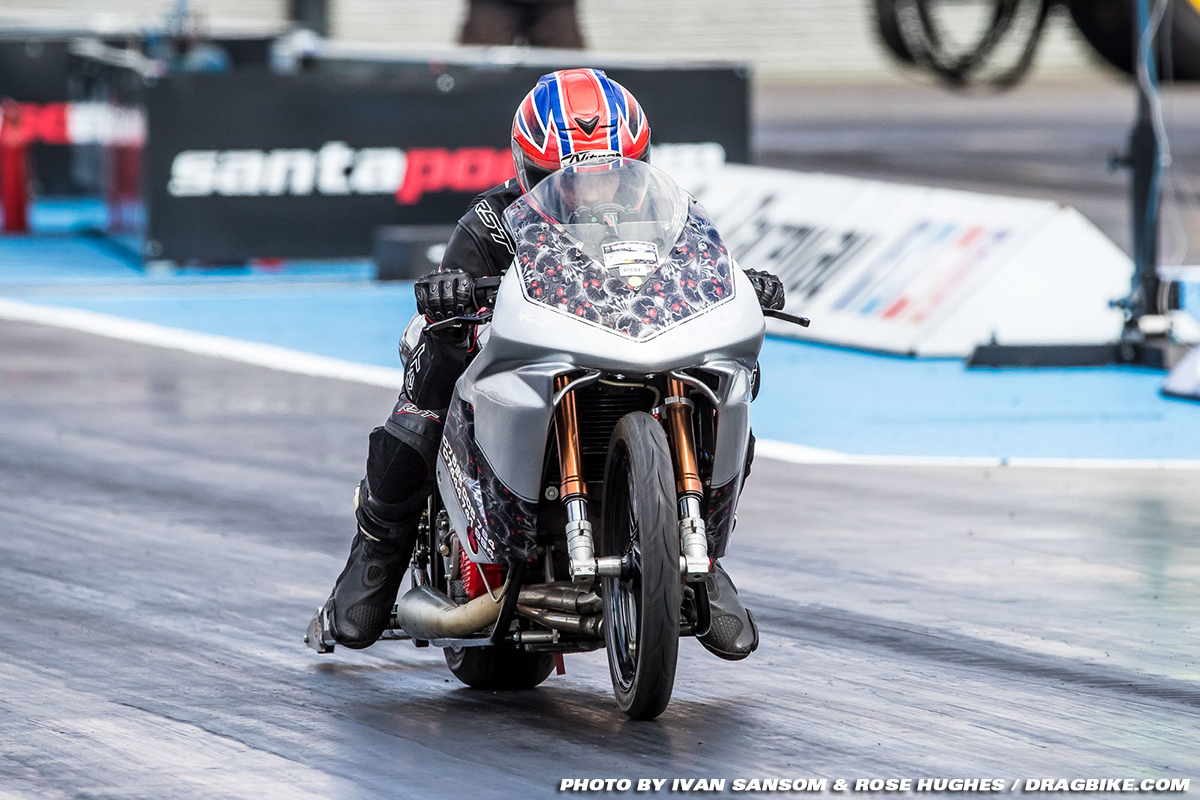 The Nitrolympx at the Hockenheimring, Germany, attracted over 40,000 spectators enjoying some of the tightest racing in the 2018 FIM-E season under cloudless skies. The weekend also saw a number of the championship chases take shape with this weekend’s Euro Finals at Santa Pod Raceway, England seeing their dénouement.

The premier FIM-E class delivered a bundle of good and not so good stories over the course of the weekend. Heading the qualifying sheets with both ends of the track record at 5.918/248.98 was Rikard Gustafsson and the RG Engineering Puma Suzuki, this pass coming alongside a 5.980/226.89 from Filippos Papafilippou in the third qualifying session to record the first side by side fives from fuel bikes outside of the States.

Unfortunately, celebrations were curtailed by the accident that befell Rikard in the shutdown area that placed him in the hospital with a broken arm, ribs and a collapsed lung although a recent update has the Swede back home in Sweden and already plotting his return to the track.

Eliminations and Papafilippou and the Gulf Oils team marched to their second event win as a collective, with a 5.956 in the first round of eliminations taking out a lane swapping Glenn Borg and a slippery 6.126 defeating Stuart Crane’s 6.935.

Fast Fil was due to face up with an increasingly rapid Eric Richard in the final, but the Frenchman was a no-show and something went west with the timing system on the Greek’s solo to the trophy and a very healthy lead in the points.

(asterisk indicates not on the Euro Finals entry list)

With eight entries to contest an eight bike ladder, this weekend’s Euro Finals will see Fil clinch his first FIM-E Top Fuel Bike championship unless something very strange happens. The Gulf Oil team are already planning on some changes to the tune-up once the deal has been done.

In the absence of the Swedish duo of Gustafsson and Pettersson (the latter having broken through a season of inconsistency with a win and new pb at a regional event in Sweden last weekend), we are likely to see strong showings from Lorcan Parnell and the compound turbo Storm funnybike over the weekend (the team having pb’d at domestic level at Santa Pod last month), and there is of course the question of who will become the eighth team to run in the fives in Europe with Rene van den Berg the most likely contender out of the assembled field.

Eight bikes provided a full ladder for Super Twin with Marcus Christiansen and the Speedy race team sitting on top of the heap with a 6.477/218.51. The first round of eliminations saw Christian Jager and Roman Sixta killing foam timing blocks handing wins to Christiansen (who clocked a class low 6.408) and Gert-Jan Laseur (who picked up a class PB with a 7.170).

The man from Japan Crazy Tak Shigematsu also progressed to the semifinals with a 6.849 and Martijn de Haas (6.867) rounding out the final four. Tak defeated a lane crossing Laseur (this was something of a theme over the course of the weekend across many classes) with a 6.868 whilst Christiansen barely dropped a beat in recording a 6.523/221.99 to get past de Haas’ holeshot and a 6.937. Shigematsu got the jump at the startline but fairly swiftly slowed with a fuel leak leaving Christiansen to take his first FIM-E event win after featuring as a runner-up in two of the last three events with a 6.434/222.77. The Dane now heads into the Euro Finals with a nice lead in the championship chase.

In a similar vein to Top Fuel Bike, realistically Marcus Christiansen has only to show up to take his first FIM-E title and add this to the EDRS Nordic Pro regional trophy he picked up in Sweden at the end of August. There is likely to be some shuffling behind him as Ronny Aasen, de Haas et al.

fight it out for what appear to be the minor honours. Aasen and Neil Midgley will also be looking for some big numbers from their blower bikes whilst Christiansen might also have the opportunity to take back the bragging rights for the quickest naturally aspirated twin from Samu Kemppainen who dipped into the 6.3s in Sweden.

Pro Stock Bike had a healthier feel to it than some recent events with ten entries making a shot at the eight bike ladder.

They were headed by Martin Newbury with a 7.162, but it was another British rider that would take the trophy with Alex Hope picking up his second event win after nailing the tree with a 0.005s RT to hang on ahead of Karl Heinz Weikum in a 7.4 second final. 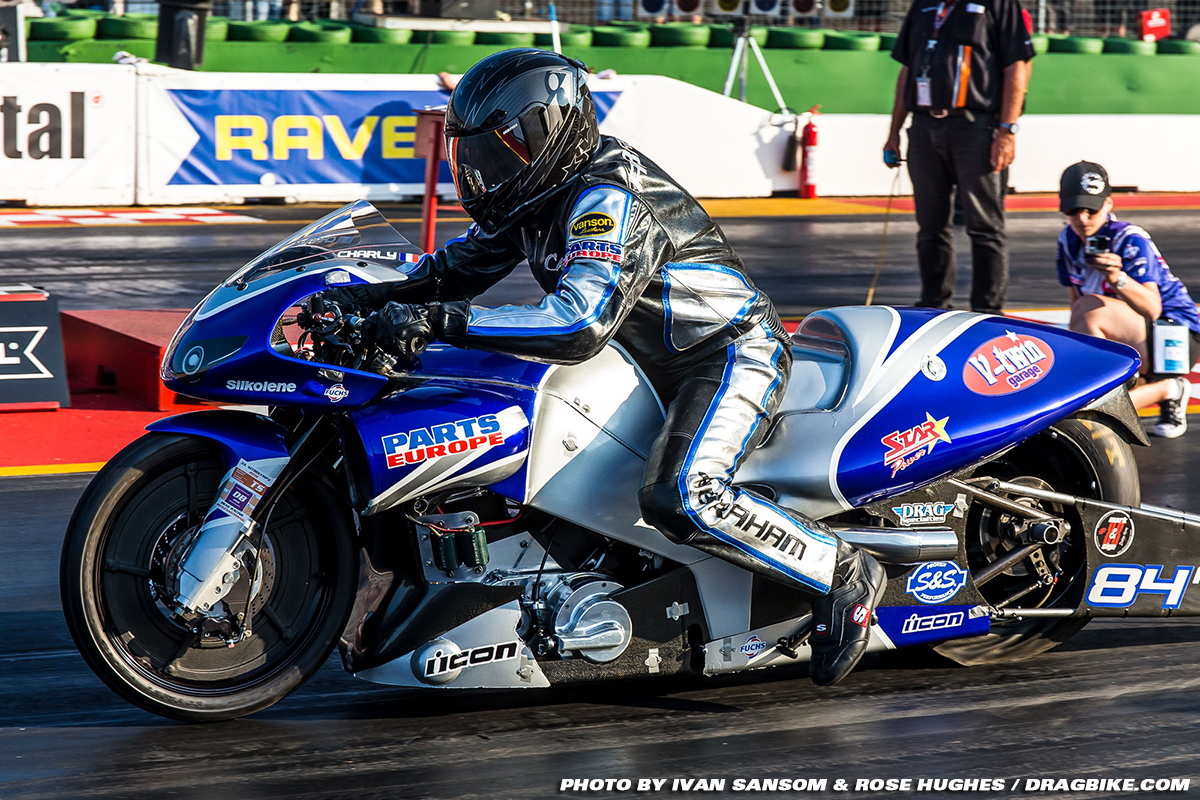 A third category and the FIM-E are guaranteed to crown another new champion at the end of the weekend. Coming into the event the big question is has Alex Hope done enough to bring home a first championship for the CBD Asylum team or will Bertrand Maurice be able to gain enough ground to overtake him.

Seven bikes are entered so the bye run for the low qualifier could be very important in deciding the destiny of the championship; Hope has been chipping away at the ETs but it might come down to a battle on the tree.

The Hockenheim Super Street Bike field is always a substantial and very multi-national affair and the 2018 edition was no exception with Denmark (Mogens Lund at 7.090 leading the way), Italy, Hungary and Finland represented in the top eight alongside the inevitable heavy British contingent.

Despite the international flavor, the semifinals became an all-British affair with Rick Stubbins defeating Stephen Mead in a 7.077/204.73 (top speed of the event) to 7.572 match up on the lower half of the ladder, while Graham Balchin occupied the other final round spot defeating Steve Venables with a 7.219 (Venables having produced a 7.037 at the quarter final stage for class low ET).

Stubbins had dropped a valve in his semifinal win and with the usual pressure to finish eliminations against a tight local curfew there was no opportunity to replace the motor so Balchin soloed to his first FIM-E win since 2012. 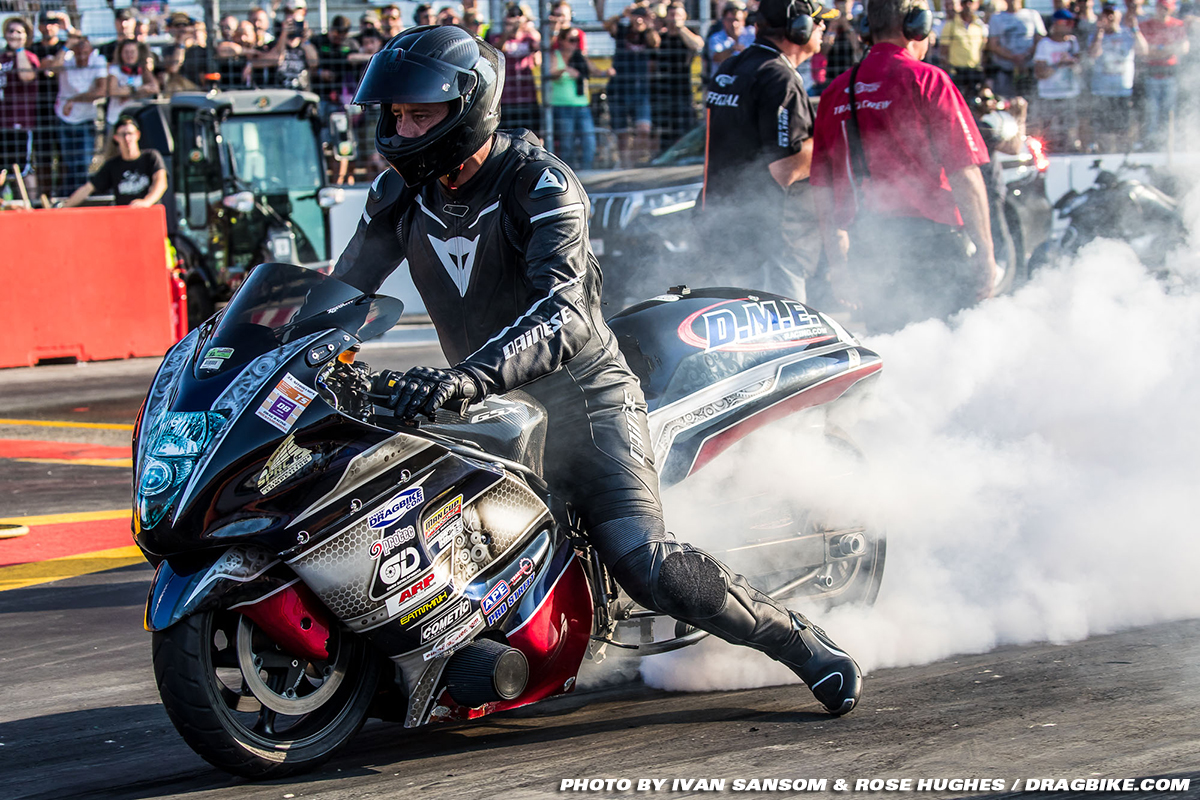 Nineteen bikes will lead to a sixteen bike ladder and four rounds of eliminations at the Finals so there is some considerable room for movement in the Super Street Bike points. The title will probably go to one of the top three with Lund being the only one without a championship win.

Stubbins has been in this position before and earned his 2017 title with a consistent approach after 2 previous appearances in the top three in the points, if he slips up then Lund and Venables could take advantage.

It was good to see more competitors joining in the Junior Dragbike Cup with Meggie Talbot qualifying in the number one spot and Germany’s Lorens Bochnig taking the event win over Talbot in eliminations.

Meggie now has a big lead as she heads back to home soil at Santa Pod next month with Holgate and Dummer probably too far behind to mount a successful challenge with only four entries for the Finals.

Watch all four days of this weekend’s Euro Finals live at facebook.com/SantaPodRaceway or www.youtube.com/SantaPodTV