John Flood ran a all-time best 8.01 elapsed time on the Orient Express 60″ Hayabusa Pro Sportbike during a test session at Englishtown Raceway Park. Running for the first time this season, in preparation for the upcoming Rockingham opener, Flood ran a 8.19 at 183 mph off the trailer and then ran successive runs of 8.10 and 8.05 before setting the all-time mark for the class with a 8.014 at 180 mph. The team parked the bike for the day after a subsequent 8.12. 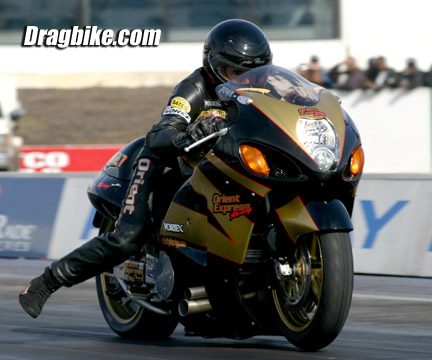 “You run an 8.0 and you really want the seven,” said Flood. “I am really happy with how we ran but I have to say I am a little disapointed we couldn’t get the number. There is no doubt we will get it and probably early in the season.”

The bike is the same one Flood ran at the Rockingham finals last year where he set the record for the class at a 8.10. It features a Velocity Racing Stage II turbo on a stock bore motor with stock cams.

“John did one hell of a job riding,” said bike buider Joe Hahn from Orient Express. “This was a good start to what should be a great season. I am really to happy to be back with Orient and a winning team.” Hahn went on to thank sponsors Velocity Racing, Spectro Oil, Vortex Sprockets and Bates Leathers.

Also testing at Englishtown was the new Orient Express 600 SuperSport team of John Hall and Eddie Murphy, Jr. Hall, riding the Yamaha R6 that Eddie Krawiec took to a number two plate last season, ran a 9.91 and Murphy, also on an R6, ran a best of 9.98 seconds.