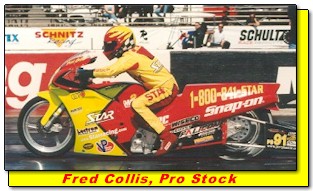 Notes: A record turnout of motorcycles and spectators enjoyed three days of beautiful weather and great performances at the Z-Max World Finals. Fred Collis qualified number one, set the MPH record, won the race, and claimed the national championship to complete a sensational rookie season.

Jackie Bryce: “We only had to qualify to win the number one plate, but we wanted to end the season with a win. Fred’s great reaction times along with very consistent ET’s we were able to do it. I can’t brag enough on our team both at the track and at the shop, this was our first season together and to win the championship is just great! I’d like to thanks all of our customers and fans that have been supporting us all season.”

Fred Collis: “What an awesome weekend. We qualified #1 for the seventh race in a row, ran in the teens all weekend, reset the MPH record to a 188.71, won the race, and best of all we won the Championship. To say the least I have had a spectacular rookie season. I want to thank all my friends and family for all their support on and off the track. Thank you to all my sponsors for making it possible. I want to especially thank the whole gang at Star Performance Parts for all their hard work and dedication, without them this would not have been a reality just a dream. Now it’s back to the grinding stone for next season.”