A Racer’s RacerIt’s with a great measure of sadness we here at Dragbike.com inform you all of the passing of Gary Clark of Iowa. At age 56, he’s left us far too soon. Try as we may to comprehend this life, we come with a birth date, but not the expiration date; that one’s out of our hands. Gary was a motorcycle drag racer for most of his life both on an off the drag strips of America. He’s best known for his accomplishments as a Funny Bike racer with exceptional talent. 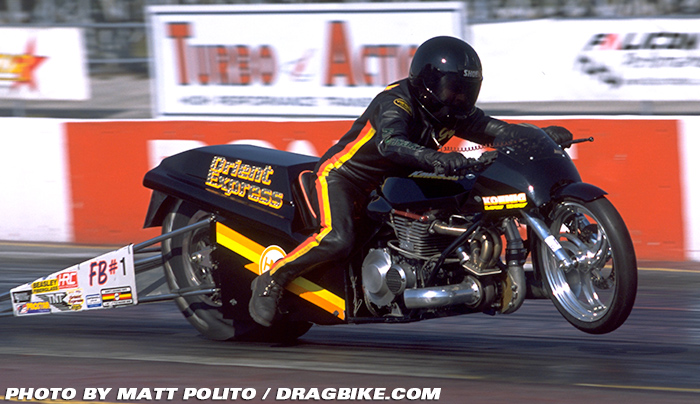 During the AMA/PROSTAR era of motorcycle drag racing, Gary was a prominent figure in the Funny Bike class of professional motorcycle drag racing having won 4 national championships with his own creations winning no less than 26 national events. Gary Clark will long be missed by his competition and by fans – world wide. Gary’s fellow Funny Bike class racers will long remember chasing Gary and his crew chief Rick Stetson, season after season.

Success in drag racing depends largely on the combination. One must master their combination before they can master the race track. To this end, Gary was a master in so many ways. 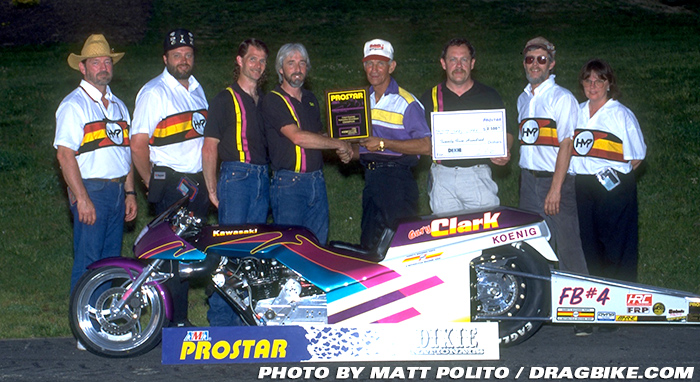 His sportsman racing began in 1975 as he progressed in the sport, then heeding his call to the professional ranks in the early 1990’s. Funny Bike was Gary’s class of choice. Six second, two-hundred mile per hour monsters that had factory like underpinnings were always Gary’s forte’.

Like most top racers, Gary was the kind of racer who could not leave well enough alone. He was an inveterate tinkerer, always looking for that extra tenth of a second. Very talented with his hands, Gary made his own drag bikes from the ground up. In fact Gary was one of the rare breed that built his entire drag bikes from the frame up. The welding and fabrication of his chassis, the wiring, the engine building, the painting; everything was home grown at Gary Clark Racing. Except one component that eluded him. And it’s ultimate capture lead to his greatest success in motorcycle drag racing. 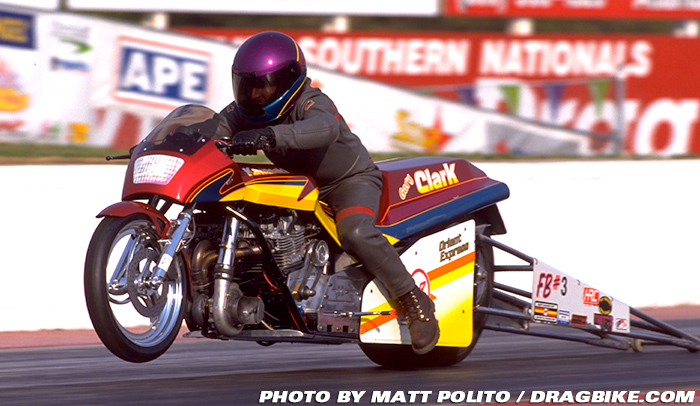 At one time, the only component in a Gary Clark built drag that was not created by Gary was his crankshaft. For that he always called on Rick Stetson of Harry’s Machined Parts (HMP) in Northboro, Mass. Gary, in being a bit of an animal with his power production, never met a drag bike part he could not break. So his calls to HMP for another crank became common place.

In motorsports, all racing parts have a life span, some more or less depending on severity of use. As a personal challenge, Rick Stetson took it upon himself to make “Clark Proof” Funny Bike cranks. Gary, never leaving well enough alone, had to know how Rick managed to work his magic.

Rick Stetson remembers fondly “He started calling me relentlessly, he just had to know. So I told him to come on by and I’d show him how to build his own cranks.” A friendship blossomed into a partnership and a business arrangement followed. After all was said and done, Gary ended up taking over Rick’s crank building business around the year 2002, just after Gary decided to stop racing the Funny Bikes and started building drag bike components.

Gary and Rick met in 1995 at an AMA/PROSTAR race held at Lebanon, Valley Dragway, in NY. At that time, Gary was racing a jack-shaft style F/B and Rick was an expert on these after having raced his jack-shaft configured P/C bike to three consecutive NMRA Pro Comp titles in the early 1980’s era of motorcycle drag racing. Beginning with the 1996 racing season, Rick became Gary’s fully committed crew chief. Together they won AMA/PROSTAR F/B championships in 1996-97-98, Gary took 1999 off and in the year 2000, Clark/Stetson struck again for the national #1 plate in Funny Bike. 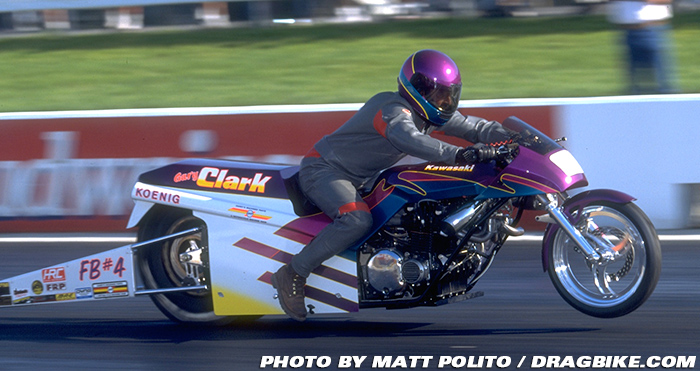 Gary opened up Gary Clark Racing officially in 2005, offering crankshaft rebuilding services and rolling chassis built by Gary from the bare tube up. Some of Gary’s earliest clients included Korry Hogan and Travis Davis. For sportsman racers, Gary’s first chassis out of his chassis jig, was a prototype unit delivered to Ed Hughes of Lowell Massachusetts at the 2002 AMA/PROSTAR World Finals. To date, Ed has won multiple New England Dragway track championships with that pipe and makes an average of 250 passes a season on the bike. Not one weld has cracked or failed on that chassis.

In racing one never knows who’s life you’ll touch or what effect it may have in years to come and Gary touched many. One such life Gary Clark had an impact upon was a guy from Colorado who could not take his eyes off the Funny Bikes once he saw them run – Mr. Korry Hogan. Korry remembers “I met Gary in 2000 at my first ever PROSTAR race. I had been following him and Rick Stetson in motorcycle performance magazines and he quickly became my hero.” Rick Stetson’s nick-name for Gary was “Cowboy.” Because he was one, he was fearless. He did everything he could to make a F/B do what he wanted it to do no matter the consequences.

Tim Borrall, a racer of some prominence that was inspired by Gary, created a drag bike in the likeness of Gary’s championship machine. Just to test a theory; because they could, Clark, Stetson and Borrall collaborated to create “Mini Me” a 7 inch rear tire bike similar to Gary’s Funny Bike, just scaled down. They wanted to prove it was about tuning, not just raw power, that they could build and race a small tire bike and still put it in the six second time zone. 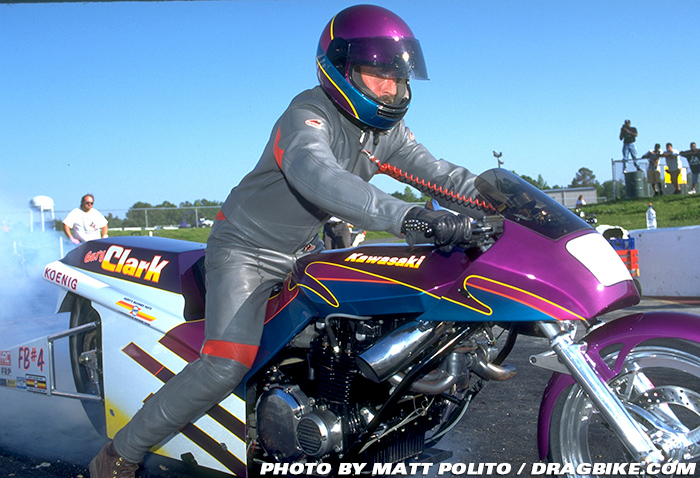 In 2001 they began on Mini-Me intending it for an experimental class of racing PROSTAR was trying out that year. By the time the bike was done in 2002 the class was no more, but they had to finish what they started. So Tim debuted the bike running it in Pro ET with a 7.37 @ 196 mph his first outing. Keith “Scooter” Kizer allowed Tim into the Pro Mod class the next season with the bike so they could see what the bike could really do in competition. The results were a best of 6.89 at 207mph in 2003 at the AMA/PROSTAR World Finals, in Gainesville, Florida.

Keith Lynn, who raced Gary on many occasions had few legendary burn downs with him, as in staging battles. Keith remembers Gary this way, “He was a serious racer out on that track. Even if he had you covered by two tenths in qualifying, he’d still cut a light on you.”

In remembering his good friend Gary, Tim Borrall commented, “What I’ll miss most about Gary was just hanging out with him. We used to go hunting, fishing, shooting, it wasn’t just about the racing, we were great friends.”

While remembering a racer as a performer and fierce competitor is important, it’s the true measure of a man that matters most.

Rick Stetson summed it up nicely “The best part of racing is the people.” 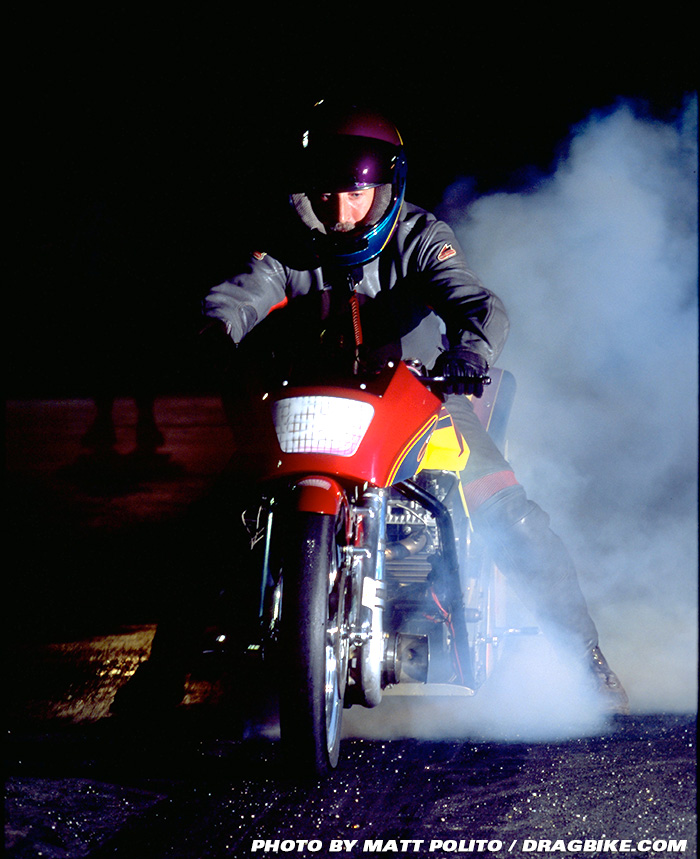