Life’s lessons are best learned the hard way for many of us. It’s not until we look back over our shoulder at what once was, that we suddenly sometimes “Get it.” If we look back at a Thanksgiving dinner shared by some notable racers back in 1979, there are some life-lessons there that we can all benefit from. Lessons that remind us all, just how lucky we are, that there’s much to be thankful for. We will forever be indebted for all these racers shared with us during their lifetime.

There was a time in Top Fuel motorcycle drag racing, when teams traveled the country like a band of gypsies rolling from race to race in small packs. The year 1979 was a banner year for this. They camped out together in the pits or stayed at the same motels as a band of brothers, most every race. They broke bread together on many nights and bonded in a way that comes from such closeness. This cemented friendships that evolved into extended families. 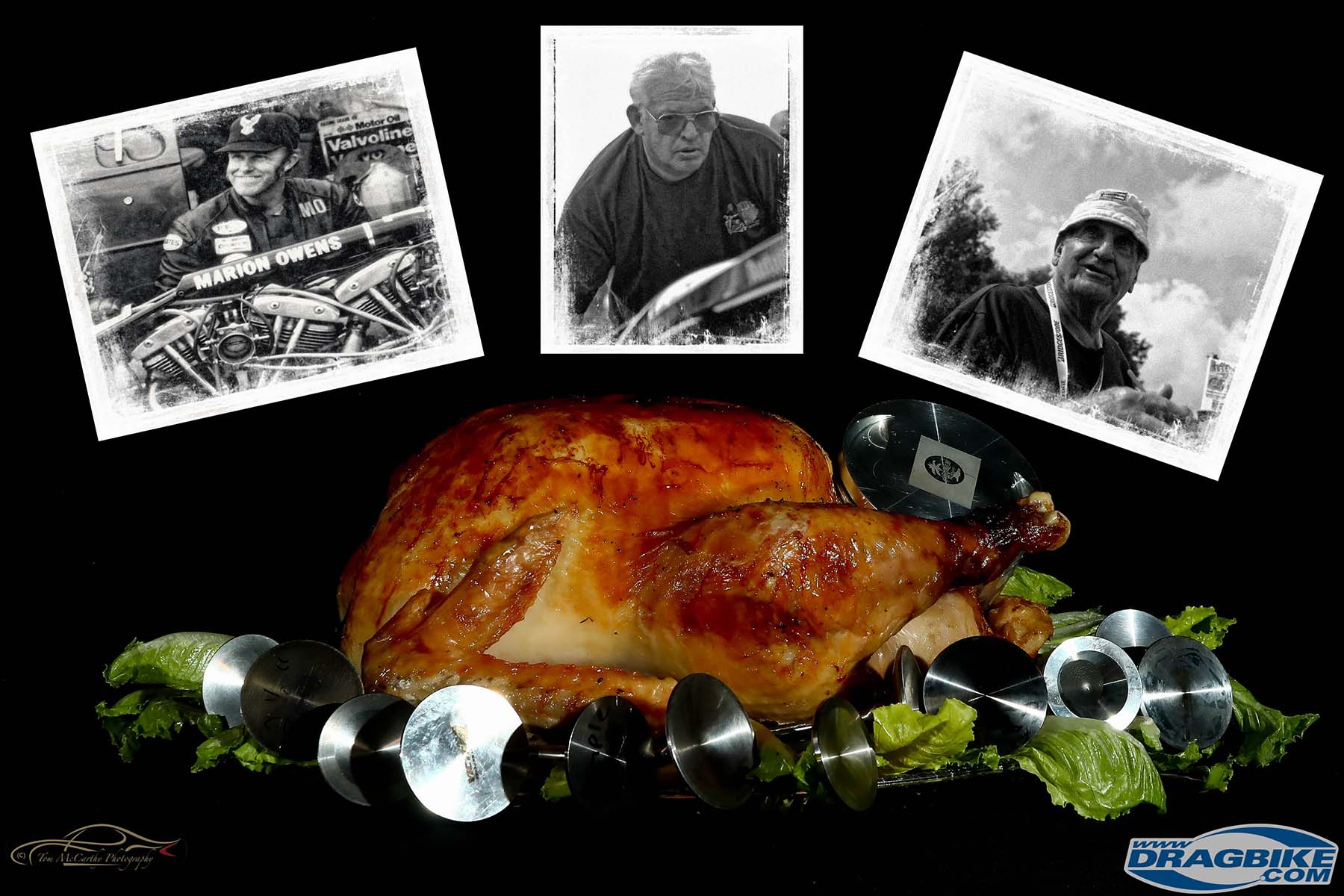 This was a time in drag racing when the sport was more important than the performance of the machines. Racing was more personal than business back then and that’s missing from much of today. And the sport of drag racing as a whole; is lesser for it.

Jackie Hill, the wife of Pete Hill, Harley Davidson nitromethane-powered Top Fuel drag bike racing legend, recalled a special Thanksgiving dinner from 1979 she shared with me in 2014, a story that struck a chord within my heartstrings. The story harkens from a time in motorcycle drag racing that some may perceive as “better days,” which have now somehow passed us all by.

As best she recalls, “Pete and I got a card in the mail one morning, first week of November, it was an engraved invitation from Marion and Kathy Owens, of Oklahoma City, inviting our family out to join theirs for Thanksgiving dinner.” It should be noted here that the time frame is the Fall of 1979. Pete Hill’s shop is located in Greenville, South Carolina, some 995 miles away from the Owens family residence in Oklahoma.

Pete and Jackie Hill pondered this fancy invitation that arrived in their mailbox. They weren’t immediately sure how to respond to this until their phone rang later that afternoon when Elmer Trett called, letting them know he, too, had received such an invitation.

Elmer asked Pete Hill, “Well, what do you want to do about this?” Pete Hill replied, “I don’t know what you’re doing, but we’re going to Oklahoma City for Thanksgiving.” Elmer and Pete kicked it around a bit, and it was decided Elmer would use his van, swing down to SC with his ladies, Jackie, Gina, and Kelly Trett, and pick up the Hill family.

Pete, Hill, wife Jackie and daughter Barbra were waiting on the Trett clan when they arrived on travel day. It must be pointed out here that the Trett clan was living in Hamilton, Ohio at the time, some ten hours of driving, close to 450 miles north of Pete Hill’s place in Greenville, S.C. Once they arrived at the Hill residence, they faced about a thousand-mile trip west; close to 20 hours of driving, to arrive at the Owens residence in Oklahoma City, Oklahoma, after driving ten hours just to get to the Hill residence.

With the two men doing all the driving, while two women with three young ones occupied the back, they headed west with a twenty hour drive ahead in Elmer’s racing van. A van that was gutted for hauling his Top Fuel motorcycle.

The van was bare inside except for the two front seats and a metal floor. In folding lawn chairs, in the back of Elmer’s orange Ford van, the ladies sat chattering while the children played on the floor as the van made its way across Mid-America. Passengers occasionally slipped into one another, like a game of bumper cars, as the van encountered various turns and bumps in the road.

This was the commitment racing friends, the extended family, made back in the 1970s to one another. It was all part of motorcycle drag racing and doing what it took to advance each other in the sport back then – before Google.

Elmer, who joined the Top Fuel bike ranks in 1976, had 20 hours of driving to compare notes with Pete Hill and talk about nitro racing. What worked, what didn’t and what they wanted to try out next. When they got to Marion’s house, Pete and Elmer had many hours to compare notes with Marion, who had been running nitromethane-fed fuel motors since the early 1960s, the same as Pete Hill. Marion shared his knowledge freely with his good friends.

There was no internet for racers in 1979, everything was interpersonal.

At Marion’s home, as the greats of Harley-Davidson Top Fuel racing discussed go-fast ideas, their wives cooked together, and their children played together. Something greater than just racing became the sum of all this. They were becoming family in the truest sense of what family is or should be all about.

While the children played, the wives supported the men, who were all on a common mission; advancing Harley Davidson nitromethane-powered Top Fuel bikes. The women all shared in that their men were obsessed with their fuel bikes, but supporting their husbands was what they did. They gave themselves in support of their husbands to free up the men so they could do what they needed to do.

Marion Owens, Pete Hill and Elmer, by sharing their knowledge of nitromethane and how V-Twin motors behaved when fed with nitromethane, strongly advanced the careers of countless Top Fuel motorcycle racers, who today, stand tall on the shoulders of these giants of the sport motorcycle drag racing.

Elmer went on to become the fastest man on two wheels, more often than not, for the next decade and a half. Pete Hill became the inspiration for countless Top Fuel Harley racers over the next fifteen years. Ultimately his shared knowledge, which he gives freely, continues to this very day. Marion Owens, who is a Top Fuel motorcycle drag racing legend in his own right, not only won many championships in his day, but there really is no telling how many other championships he’s helped other racers win by the sharing of his knowledge.

Today decades later, long after this Thanksgiving gathering transpired, we are all thankful for their exchanges. There are now hundreds if not a few thousand Top Fuel motorcycles worldwide, that thrill racing fans from Australia, to Japan, from Sweden to Germany. Every one of these machines is a result of shared knowledge from racer to racer, from family to family and a whole LOT of hard work. Globally, the Top Fuel motorcycle racing community has risen together – by sharing.

Their shared struggles have become our universal triumphs, which we now all share in and we should all be grateful for.

Happy Thanksgiving, share what you can with one another.

“Special thanks to Johnny Vickers and Hawaya Racing for their contributions to this story and to Sandra Alberti for her contributions as well.” – Tom McCarthy