“Probably an A-,” NHRA Road to the Future candidate Gladstone graded his team. “This being my rookie year, I’ve made some rookie mistakes. I had one holeshot loss by a couple thou—that was no fun. Other than that I’ve been leaving on time, hitting my shift points and not making too many errors.” 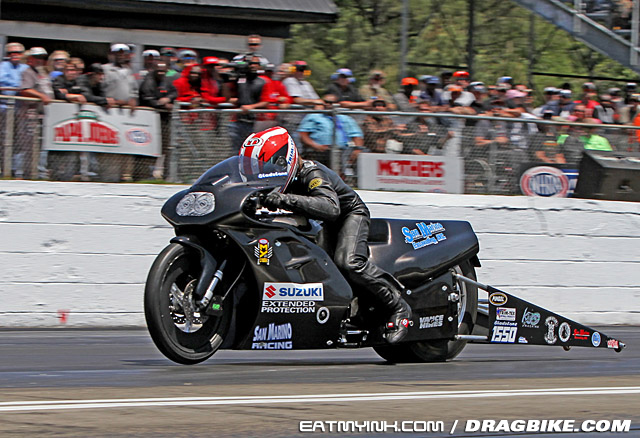 Indy is the final race before NHRA’s ten-rider championship Countdown. “We’re sitting eighth in points right now,” Gladstone noted. “That leaves us with a little bit of cushion, not a lot. If we make it to the second round this weekend, I’m pretty sure we’ll make the Countdown. That’s our main goal.”

And starting with Indy and into the Countdown, the team will trod some familiar ground for a change. Even though this is Gladstone’s first full year on the tour, he and owner/tuner of the San Marino Excavating Suzuki, Joe Riccardi, made a few races last year, including Indy. “It’s great to get back to the tracks that I have data from last year,” said Riccardi. “It gives us confidence.”

“B-,” is how Riccardi grades his team’s year so far. “I’m my biggest critic when it comes to providing Joey with the best bike I can.”

And Riccardi’s done a great job of that. “I’ve been fine tuning all the systems on the bike this year, along with learning different track and weather conditions for set-ups. The team is also working great together. Chris Clontz, our steady mechanic, has been crucial to the bike maintenance being like we expect it and will be key in securing a place in the countdown.”

As good of a year as it’s been, there is one honor on the table that Gladstone, realistically feels is out of reach. “I don’t think Rookie of the Year is in our grasp anymore with the way (Pro Stock Car rookie) Tanner Gray has been racing, but it’s been a great season so far. I’m really enjoying the experience, going out to all these races, meeting new people and new fans. It’s been fun. It’s the way I envisioned racing is supposed to feel.” 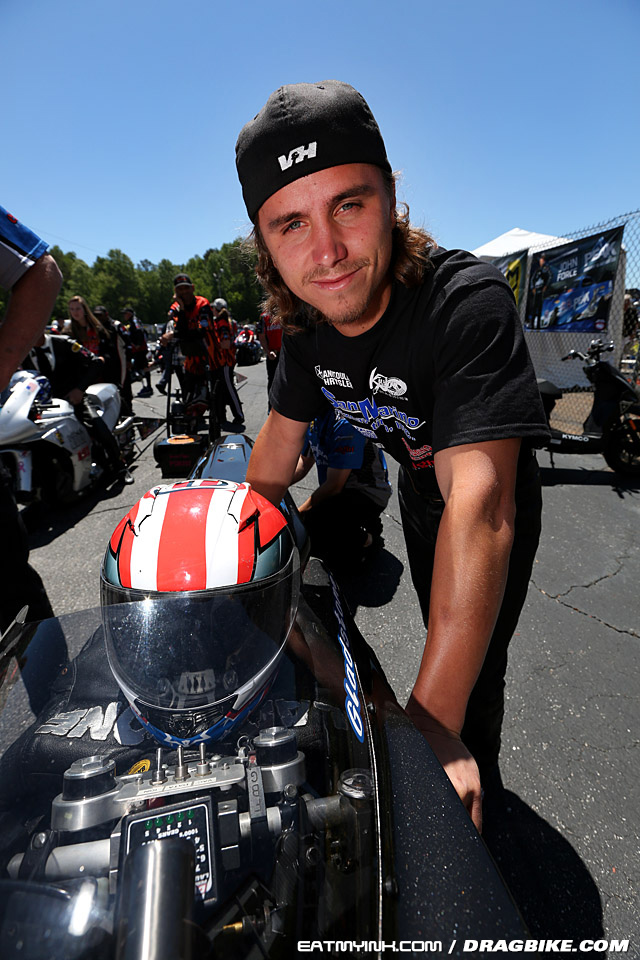 Although the team didn’t test at last week’s session at Lucas Oil Raceway, they’ve still been busy preparing for the back half of the season. Back in Delaware, Gladstone has been using his bracket bike to break in new tires for the remainder of the season on his driveway. Good morning neighbors!

And Riccardi’s been busy back in his Michigan shop. “We have plenty of parts and pieces, and multiple engines, to possibly make some noise in the Countdown,” said Riccardi.

You can bet on this team playing a spoiler role and aiming for a top half position in the Countdown. “I’m getting more and more comfortable on the bike every time I ride it,” said Trim-Tex sponsored Gladstone, who has ten motorcycle drag racing championships on his resume. “It’s starting to be routine now.”

And Riccardi doesn’t intend to be timid when it comes to tuning the motorcycle. “If you’re afraid to lose you will never win,” finished Riccardi.