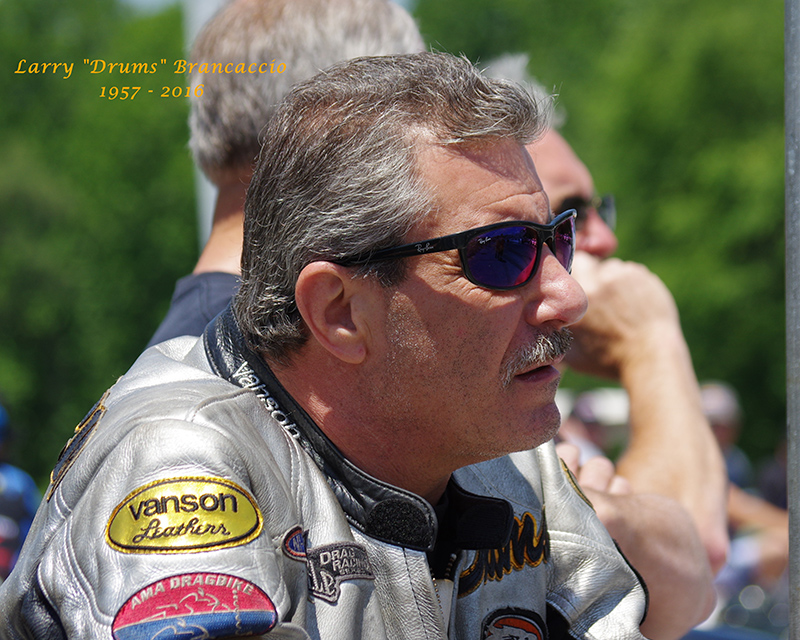 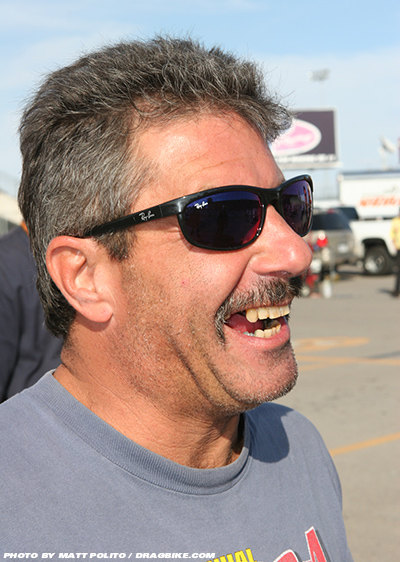 On the morning of October 26th, 2016, the sad news reached me of the passing of Larry “Drums” Brancaccio, of Nutley, NJ. It appears that Larry passed away sometime on Tuesday, October 25th due to a cardiac event. Larry was 59 years old at the time of his passing.

Drums, as the entire drag bike community knew him by, was a fierce competitor, a staunch Nitro Harley racer, a foe to be respected and a friend to many. The news of his passing takes all members of the motorcycle drag bike racing community as a huge shock.

Larry was a veteran fuel bike pilot, who started competing on nitromethane burning drag bikes in the early 1990’s, has a host of accomplishments that color his near two decades of racing which include dozens of track records from across the USA, championship titles with the AHDRA and ECRA sanctions, and was in solid points contention during the 2015 IHRA Nitro Jam Tour. 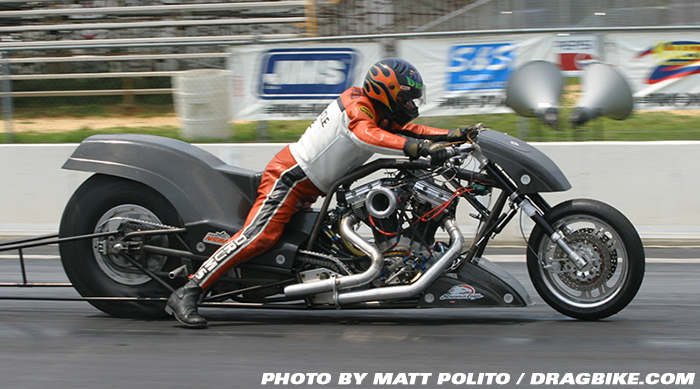 We all expected Larry to continue his winning ways in motorcycle drag racing. No one had a clue we were about to lose him.

Just last year, Drums had a great season underway until a mishap at an IHRA Nitro Jam race on Friday, May 29th, 2015. During Q-2 racing action, Larry suffered a mistake that caused him to run out of race track and drive headlong into the sand-trap at Cordova, International Raceway, in Cordova, IL. Larry came off the bike at high speed and was badly injured in the aftermath.

His injuries were such that after on scene medical assessment, he was sent as quickly as possible from Cordova, Illinois to the University of Iowa, Medical Center, which has a Level 1 Trauma Center. Larry then underwent several surgical procedures. He suffered multiple broken bones along with other complications, but was determined to return to Top Fuel Harley racing. 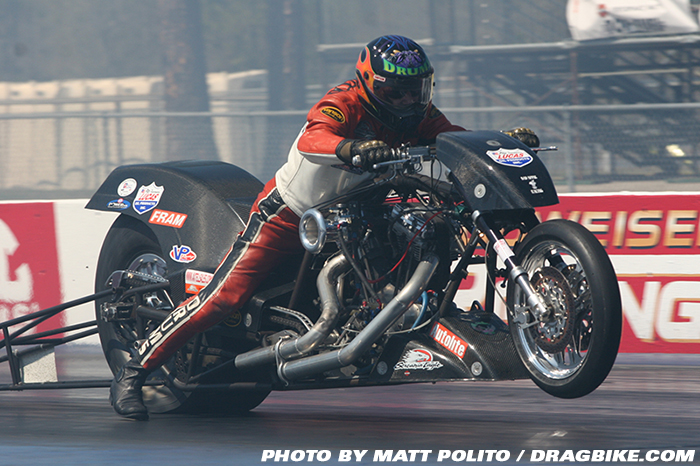 That crash ended Larry’s 2015 racing, but Drums spent the remainder of the year getting back on his feet. He started hitting the gym regularly, preparing for a return to competition. During the 2016 season, Larry and his team spent what time they could rebuilding Larry’s Top Fuel Harley, and they had the bike about 75% restored, with an eye on returning to competition in 2017, if all things worked out. 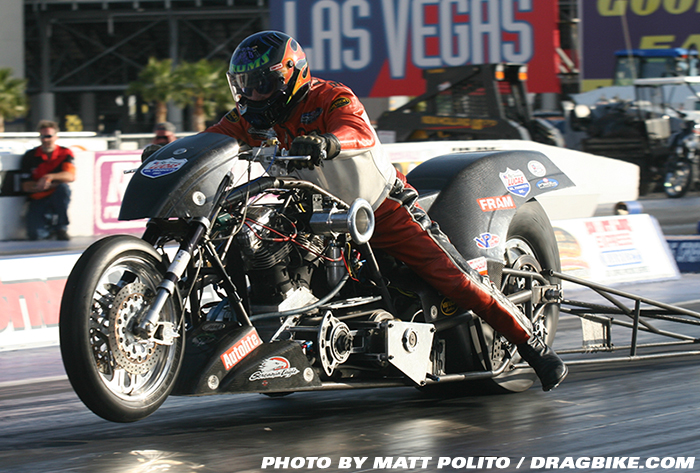 Larry DRUMS Brancaccio was a one of a kind guy who made the world a better place to live in. Sometimes know as “The Nut from Nutley,” other times referred to as “The Flying Cockroach” for his wearing of the aerodynamic helmet he occasionally wore, with the tail section hanging off the back, Larry was as colorful as an Arizona sunset. From his double pierced nipple rings to his tattooed everything, Larry was often described as many things to many people, but never boring. Larry lived life to the fullest.

His nick name “Drums” came from his love of music and his being a drummer when he found the time. That was scarce for Larry because his love of motorcycles and drag bike racing occupied much of his time. During Larry’s racing years, he was either at a race track somewhere, or preparing to get back to one. He loved Top Fuel Harley motorcycle drag racing like life itself. 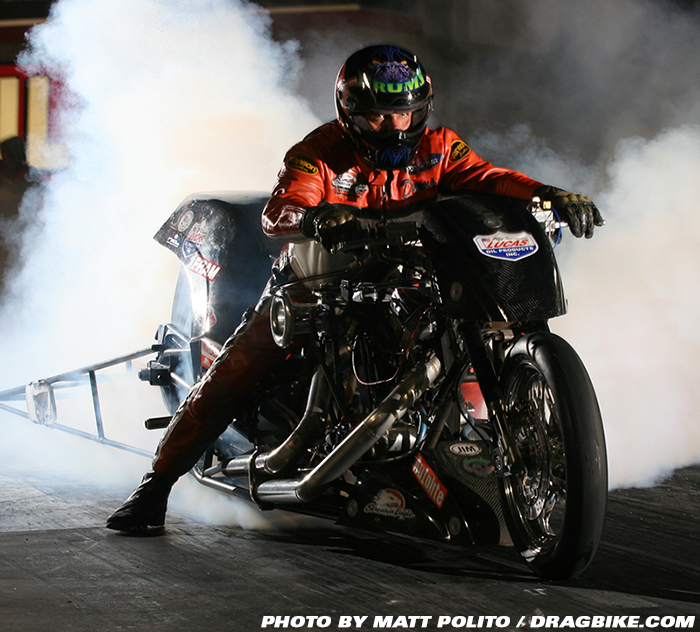 I can’t tell you how many motorcycle drag racers Larry inspired along the way to get into the sport and then move up to fuel racing. But I can tell you about one: Frank Capone of Boston, MA. Frank got into Harley drag racing largely because of Drums and it was Drums that gave Frank the shove to get into Nitro Harley racing. Frank crewed for Drums a few times and once he left the gas bike ranks, now in 2016, Frank Capone is national #2 in Top Fuel Harley with the AMRA sanction in just his second year of T/F Harley racing. 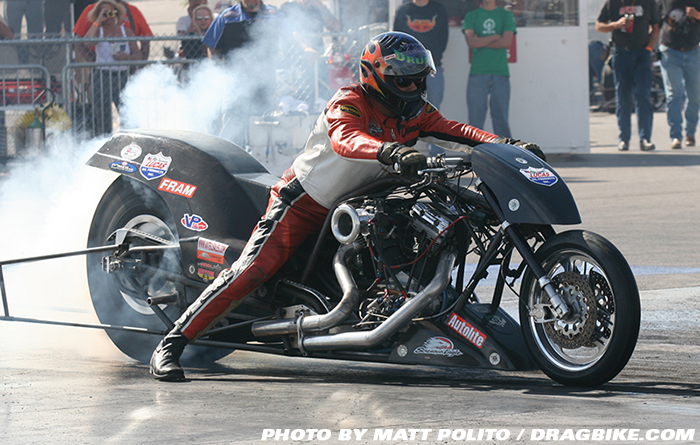 Drums had a swagger about him; he was a bit like the Arthur Fonzarelli of motorcycle drag racing and every bit as cool as The Fonz himself. When Drums was around, everyone knew it. He was not shy in the pit areas or on the race track. Outspoken, loud, Larry was just like the motorcycles he raced; very noticeable. 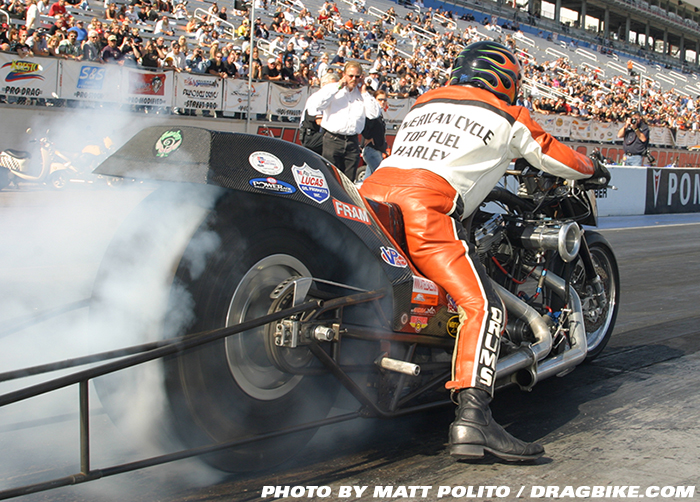 Larry raced gas bikes, then moved on to Pro Dragster carbureted Nitro Harleys, then on up to Top Fuel Harley. I remember at a race in Bithlo Florida at Orlando Speed World in the 1990’s, I was shooting Larry from under the guard rail, looking up at him and on the launch and “Bang” the motor just erupted. I had a great clear color slide photo of Jim McClure on the bike before Larry’s launch. But Drums photo was just a violent blur as in the photo, his bike just burst apart. Not a problem, this was just another race for Drums, he was back on the motorcycle at the next event. 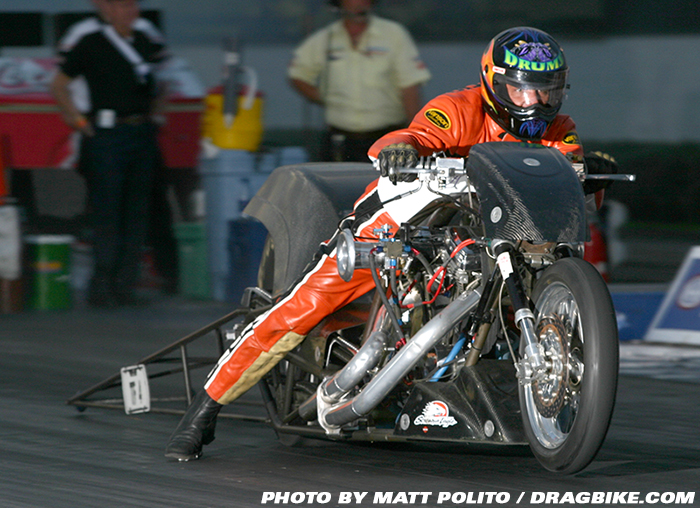 Larry held records and championships with the ECRA (East Coast Racing Association), the AHDRA (All Harley Drag Racing Association) and Lord only knows how many track records he set along the way. He had a great career in Top Fuel Harley motorcycle drag racing, everyone knew his name. At any race, you could ask anyone “Where’s Drums in the Pits” and I can assure you, people knew exactly where Drums was pitted. Larry was one of a kind, colorful, outspoken, hard working Top Fuel bike racer.

Larry’s loss is a mind-numbing reminder to us all that our clock is ticking, no one knows when it will stop. But stop it will one day my friends. Live life to the fullest and like Larry, live it out loud.