Just 12 months on from retiring following an appearance at Hidden Valley Drag Strip, Crawford returned to the venue last weekend to get some laps under the belt in the Modified Bike category ahead of the Summit Racing Equipment Sportsman Series opener at the Desert Nationals in Alice Springs.

“When I did my last run on the Top Fuel Bike back in July last year at the Darwin event, little did I know that I would be jumping back into grassroots racing in Modified Bike a year later,” he explained.

“I had promised my Mother that Darwin 2014 would be my last run on the big bike which she was quite happy about as she was okay with me riding in Mod and Comp Bike but not happy when I was on the Fueler.

“Mum was fine when I last saw her just before I departed Perth to drive the teams up to the NT for the two rounds but sadly passed from a massive stroke 6 hours before my first elimination run against Mark Drew. The rest is history.”

Retirement was difficult but the decision resulted from ongoing costs running a nitro bike and slowing reaction times. Although he was a regular at the track and assisted other West Australian racers to travel the country and compete, no one expected Crawford to return to the saddle.

“That was one of the toughest decisions of my life but was made easier when the downturn in the mining areas drastically affected most of my investments which were helping to fund our National campaign. 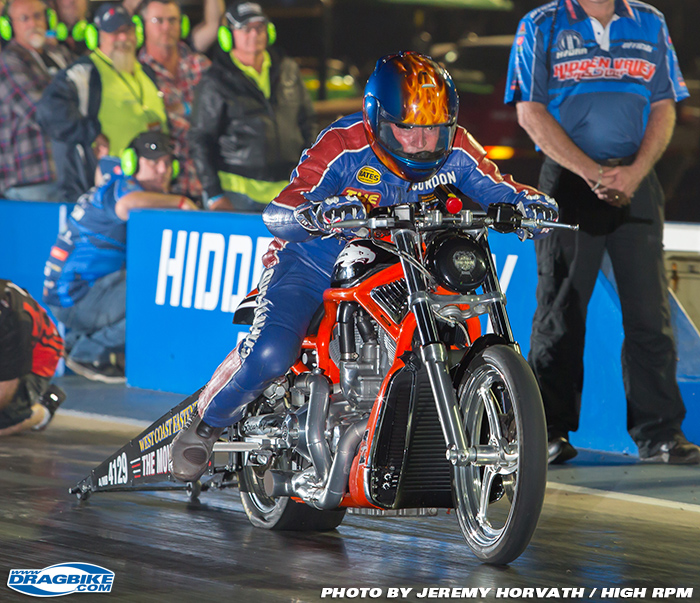 “I sold my Fuel Bike to Adam Layton from APL Performance Motorcycles in Sydney and delivered it to him in May this year while on the way over to the Sydney event that was washed out.

“When I unloaded it into his workshop, there was a nice Harley Destroyer just sitting in the corner minding its own business.

“Well one thing led to another and… I owned it by the end of that day. It is still in Sydney as Adam is doing some upgrades for me to see if we can get a bit of life into it.”

While you won’t see Crawford on that particular Harley at the Desert Nationals, you will still see him on a Harley Destroyer in Alice Springs.

“I decided that now I was going to ride the Destroyer I would only need a small trailer to cart the bike to my local Perth track (Perth Motorplex) rather than the semi.

So I looked on Gumtree and there was a trailer advertised in Perth to suit a Harley. Long story short, I went for a look and found it okay for my needs. While there, Kurt Martin (the previous owner) said, would you be interested in buying a Destroyer?

“Due to the fact that I had already committed to take other teams North to NT and my bike did not look like being ready on time, well… I owned it by the end of that day.

“So now I have a fairly standard Destroyer for Alice Springs and hopefully a much quicker scooter later that just might be good enough for Competition Bike.”

Eventually with two bikes at his disposal, Crawford could become a contender again but he maintains it’s all about having fun as he faces a quick learning curve on a completely different style of bike.

“I’m certainly looking forward to ‘getting a leg over’ again, because I sure as hell have missed it these last 12 months, only something a bike rider can really understand.

“As far as winning goes, quite honestly, I’m just happy to compete, winning is a bonus. I get as big a thrill when I see my mates winning as I do myself.

“I had the privilege to compete in Alice at the official inaugural opening event a few years back and loved it. The atmosphere there is fantastic as are the local competitors and track staff. All the Perth racers that have been there love the place, it reminds me a lot of the early Ravenswood days in Perth.”

The best in Australian Sportsman racing descend on Alice Springs Inland Dragway for Round 1 of the Summit Racing Equipment Sportsman Series at the 2015 Desert Nationals July 25-26.