HomeTeam ReportsGrothus Wins Not Once, But Twice In Indy

Grothus Wins Not Once, But Twice In Indy

Grothus Dragbikes finished the 2015 NHDRO national circuit in style this past weekend by appearing in three final rounds and winning not once, but twice at NHDRO’s World Finals at Lucas Oil Raceway.

The World Finals event weekend started off with a great deal of testing on Friday by the Grothus Dragbikes team and valued GDB customer Jean Gosselin with his Quebec, Canada based jr. Pro Mod dragbike “The Canadian Express.” (This bike is now for sale, please contact GDB to find out more) This pre-raceday testing would end up paying dividends come Sunday. 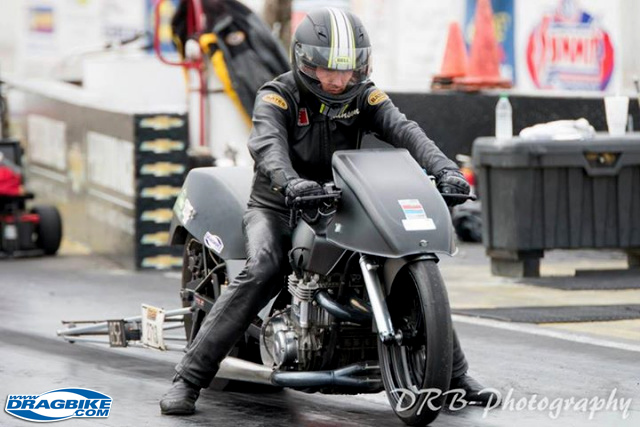 With testing complete and new knowledge gained from Friday, Grothus Dragbikes was ready to qualify well on Saturday. “The Canadian Express” was the first bike to hit the track from the GDB pit area for pro-qualifying and managed to cover the 1/8th mile in an acceptable 5 seconds. After a couple more looks at the track and a more-powerful tune-up, Gosselin’s bike, ridden by GDB rider Brunson Grothus, was into the 4 second zone and ready for eliminations.

The 2015 Indocil Art/Grothus Dragbikes Pro Mod was on a rail all weekend long from start to finish. After three rounds of qualifying, the 1800cc GS Suzuki, tuned by Ed Grothus, locked up the #1 qualifying position with a blistering 4.13 at only 166 mph.

With qualifying in the books, Sunday race day was on the horizon. To start the race day off, the national championship winning ET bike hit the track for a couple round wins before first round of pro eliminations. 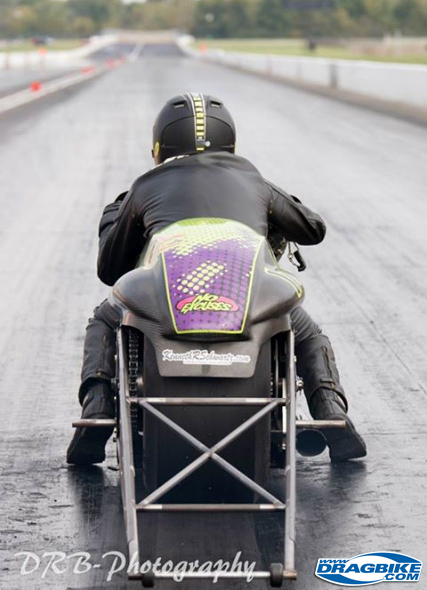 Next, “The Canadian Express” fired up for many round wins en route to its first final round appearance on U.S. soil. Bike owner, Jean Gosselin, was enthused to see his former pro-stock bike turned nitrous huffing jr. pro-mod winning round after round. In a similar fashion, the 2015 Indocil Art/Grothus Dragbikes Pro Mod was covering the 1/8th mile in a little more than 4 seconds and turning on win lights too.

After more rounds of ET racing eliminations in between pro elimination rounds, rider Brunson was able to make it to the finals in all three classes on each of the three bikes. Down to the final round of Pro Ultra 4.60, Brunson was head to head with prior event winner, Les Stimac. Here, Brunson took the starting line advantage and never looked back as “The Canadian Express” won GDB’s first final of the day. Bike owner, Jean Gosselin, stated that watching his bike driven to a victory by GDB rider Brunson Grothus was a dream come true! 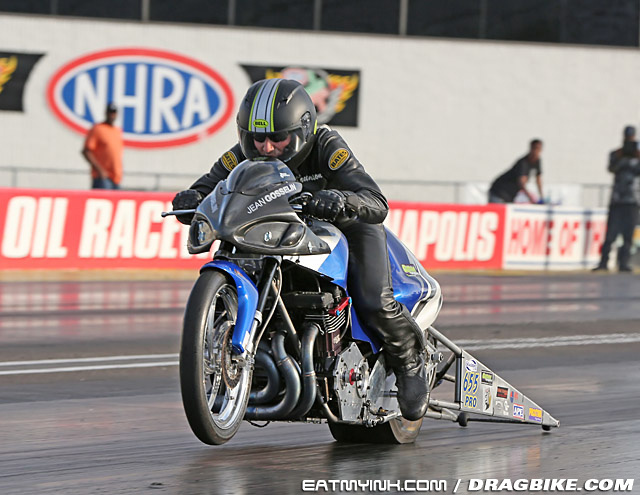 The next final round for GDB was in the pro-mod class. This final paired GDB’s latest pro-mod build against their prior pro-mod entry now owned by Nashville, TN based Fast Time Motorsports. The Fast Time Motorsports team has put a great deal of time and effort into advancing their program this year, especially with a recent rider change to PA-based Richard Gadson. This is not the first time Grothus Dragbikes has faced their old bike this year as the two squared off at the prior race in Rockingham, NC. As it was a month prior in the semi-final round, the Indocil Art/Grothus Dragbikes entry came out victorious. 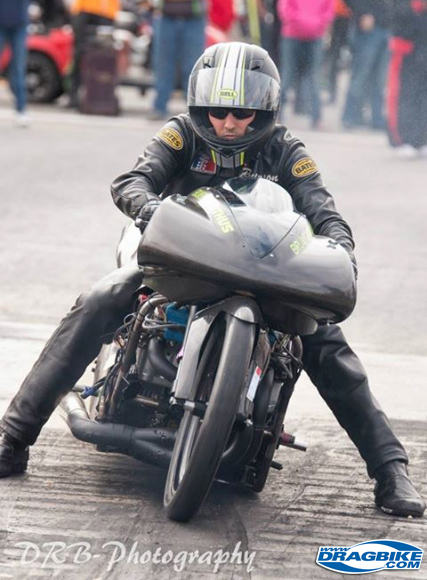 With rider Brunson Grothus two for two in final round victories thus far, it was time for the Pro-ET final round. As the 1500cc Kawasaki started its burnout, a rod from the crankshaft exited the front of the motor causing catostophic failure. Grothus Dragbikes would depart Indy with two impressive victories and a stellar runner-up finish! Attaining this level of success could not come without the help of Grothus Dragbikes’ outstanding marketing partners: Indocil Art, Sentry Industries, Hoffmann Trucking, Environmental Management Services, Roemer Machine, Robinson Industries, Schnitz Racing, Liberty Transportation, Klemme Performance Motorcycle, Terrell Erosion Control, & R.C. Iossi. GDB would also like to thank the photographers who took the great pictures seen in this article. 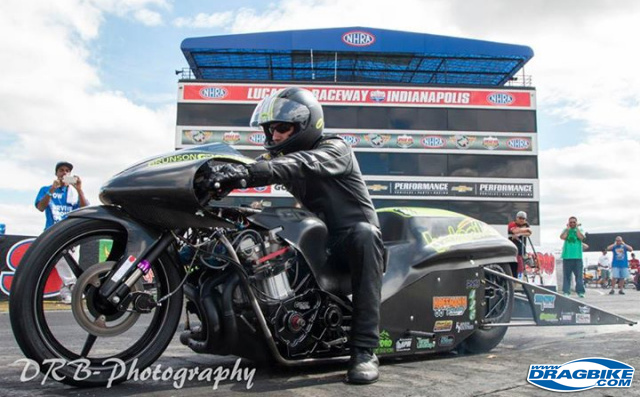