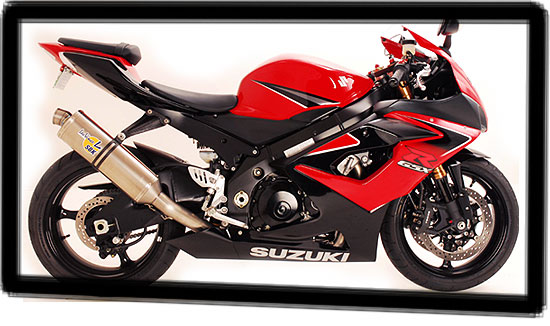 Perhaps the most popular modification done to new sportbikes is the replacement
of the factory exhaust with a full “race” system. Of course these
aftermarket exhausts are for “off-road” (we assume you know the
double secret hand shake right?) use only so they have a little more freedom
than the factories when designing to the highest levels of performance.

Over the years we have seen practically every brand of exhaust system made,
and spent more than our fair share of money on these systems. Each year new
companies come and go in this industry with some of them lasting a short time
and others for decades. Leo Vince fits into the later category as they have
been in business since 1954 in Italy. The parent company Sito Gruppo Industriale
is actually one of the oldest companies in the world producing motorcycle exhausts.
Leo Vince was also the first company to use titanium in motorcycle exhausts
as well as being the first company to offer a motorcycle slip-on exhaust.

Factory Pic Here If possible can you do a whole slide show or a series of pics
from their factory?Just like you, we have seen their products on race bikes
such as Marco Melandri’s Moto GP bike, and closer to home in the AMA Roadracing
series with Matt Lynn from the Millenium-KWS Motorsports (www.kwsmotorsports.com)
team. In fact, it was Kevin Hunt owner at KWS that convinced us that the Leo
Vince SBK Corsa Full Ti system was the exhaust that we needed for our latest
project. So with the new 2006 GSX-R1000 sitting in the shop looking like a super
squid stocker, we agreed that a new exhaust was in order. Three days later the
new exhaust was here. Contact www.leovinceusa.com
or 1-888-610-4242 to order yours.

When you see as many bike parts as we do one tends to get accustomed to a daily
stream of swag rolling in the door. But as soon as we opened the box on the
Leo Vince SBK Corse Full Ti system, it was clear this was no ordinary exhaust.
Each part was wrapped in its own plastic bag and separated with protective wrap
and paper to prevent any damage or scratches. Even the springs were contained
in their own bag (yes each one). I know what you’re thinking, who cares
right? It’s a shipping box and it was packed up nice so move on with the
story. I point this out only as one of the many points that demonstrate this
exhaust is no ordinary race exhaust system. Even the instruction manual came
with lots of details such as the sound rating, weight (down to three decimal
places, and it was dead accurate too) and a dyno chart. 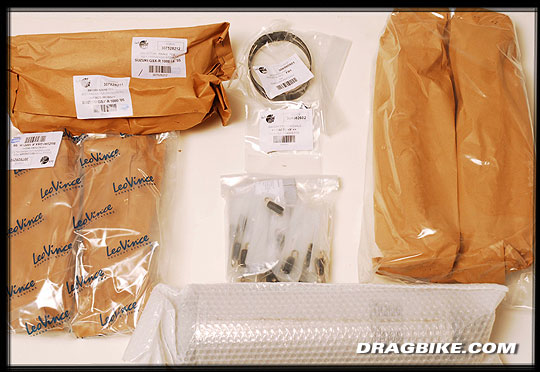 And since the Suzuki uses an exhaust valve that is removed as part of this install,
they even included full information and wiring instructions to avoid a FI light
when you bin the stock exhaust flapper valve.

To remove the factory exhaust you first need to remove the seat and both side
farings to gain access to the stock system for removal. Next you will need to
remove the drain lines for the stock oil cooler and the bolt securing the bottom
mount of the radiator. Swing the radiator forward allowing access to the exhaust
flange mounts at the front of the engine. After removing all 8 of those bolts
you will need to remove the canister bolt on the footpeg, as well as the mid
pipe collar and remaining bolt that connects the mid-pipe to the frame of the
bike. Slide the canister off the mid pipe and lay it aside and you should be
able to negotiate the one-piece main header pipe free from the engine. Working
on a bike lift is helpful if you have one as it prevents you from lying on the
floor for these activities.

After unpacking the new Leo Vince system you can see it is very different than
the stock system. It is a series of fabricated titanium pieces that assemble
as you go along. While it looks complicated at first the truth is that this
design allows an easier installation than if it was one or two large pieces.
The directions are very clear and require very little supplementation. I was
impresses that even the individual head pipes are stamped with a part number
that allow you to tell which one goes on which cylinder of the bike. The other
parts are easy to identify as well from the detailed parts list. 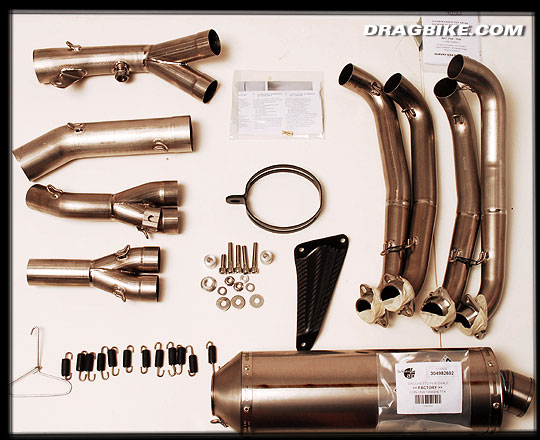 First we carefully weighed the entire system and recorded the weights of each
component to see the total loss of the project. The Leo Vince SBK system in
full titanium (carbon is even a bit lighter KWS informed us) weighs in a 10lbs
and 1 ounce. This includes all the springs, bolts and the canister mount. The
factory system tipped the scale at 15lbs and 12 ounces. When weighing the factory
system, we included the foot pegs (1lb 14 ounces) as well since the new Leo
Vince system replaces them with a super light weight carbon fiber hanger that
looks like it came off Matt Lynn’s AMA Superbike. Oh wait……..
it is exactly the same as on the AMA bike as is the rest of the exhaust system. 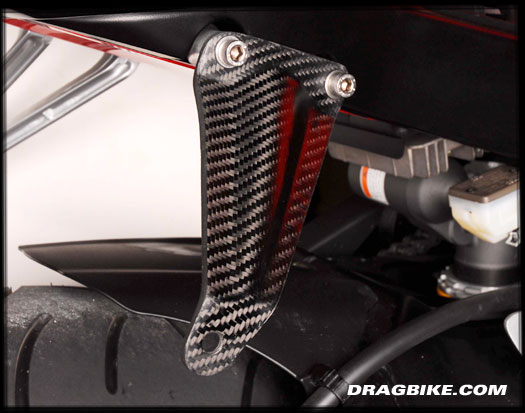 Total weight loss rings in at a solid 5lbs 11
ounces. However, this weight loss does not include the removal of the exhaust
valve stepper motor. While it can be removed due to the new exhaust system,
we simply left it on though we did disconnect the cables. For those of you that
want to retain the stock foot pegs, the mount is engineered such that you can
use it in place of the carbon hanger and retain rear seating if you desire.Installation

Since our bike was brand new we simply used the factory exhaust gaskets and
loosely fitted the head pipes and continued along toward the rear using the
instructions included using the rubber sleeved springs to connect the pieces.
The only tip we could add to the excellent instructions is that on the #2 head
pipe we found it was easiest to torque it using a standard 6mm angled allen
wrench instead of a more common socket mounted or T-handle 6mm tool.

Fit of the whole assemble, was incredible and at no point does the system interfere
with the stock oil filer, drain plug or the factory farings. In fact both the
oil and oil filter can be removed with the farings in place through the side
faring vent. Wow, what convenience! One portion of the exhaust has a small stand-off
welded to the pipe to make sure the hot exhaust does not contact the plastic
and cause any damage. This is another element that shows the attention to detail
of this product design. 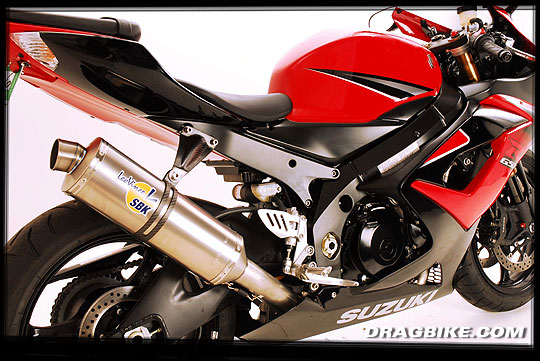 Once in place the stock exhaust looks very cool and we did not experience one
single fitment or installation issue. As you can see the exhaust looks great
on the bike and the sound is fantastic. With its HUGE 2.36” diameter canister
pipe it also shows that this pipe is ready to flow some serious exhaust gas.
We also noted during the install that the head pipe are tapered diameter and
have a very purposeful construction. It’s clear that everything about
this exhaust and its construction is all about going fast and looking good.
Even though this is a race exhaust system thankfully it is not the loudest,
but it will get some attention when you pull up next to a stock bike. At full
rip it sounds like a screaming banshee as it sends a message to everyone that
this bike doesn’t play.

Another good thing about the Leo Vince product is that you don’t see them
being sold at JC Whitney and every other discounter. If you are looking for
some exclusivity and a very well made product this is the one for you. Retail
price is currently $2268 but if that is too steep for your wallet never fear.
KWS Motorsports is working with Leo Vince now to release a new “shorty”
design canister that will result in a significantly lower price. Expect to see
a release on it by late fall 2006.

After we installed the exhaust we topped it off with a Dynojet Power Commander
and Ignition Module (www.powercommander.com).
This allows full adjustability of the fuel and timing curves for each cylinder
and assures the bike is fully optimized for the new exhaust. As you can see
in the dyno graph the exhaust in combination with the Dynojet parts really wake
up the bikes power curve. Not only is it fatter through the middle it also pulls
harder on the over rev up near redline. Overall, we are very pleased with this
setup and you will be too if you decide to take a top quality route like we
did. The exhaust even includes a threaded bung if you want to add a Dynojet
Wideband Commander (www.widebandcommander.com)
which we will cover in another install article later on. 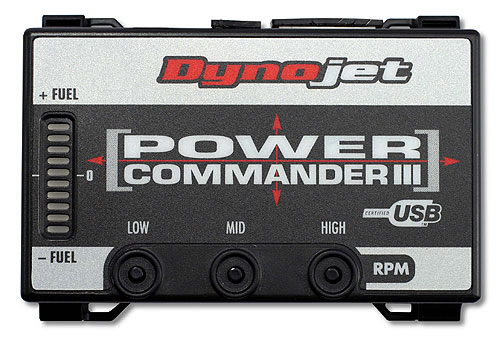 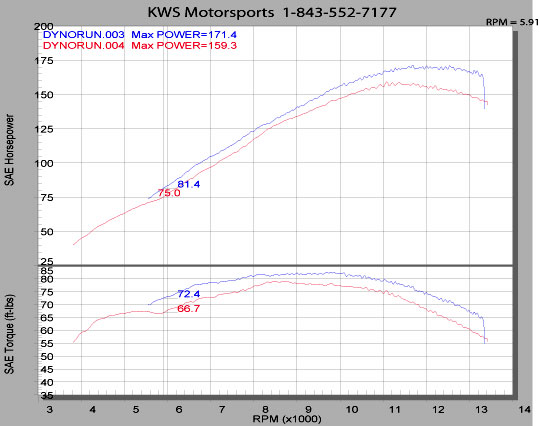 In the next installment of the GSX-R1000 build up we will be installing
Galfer Wave rotors, pads and brake lines. So stay tuned.

Following are some great shots from the
Leo Vince-SBK Factory. 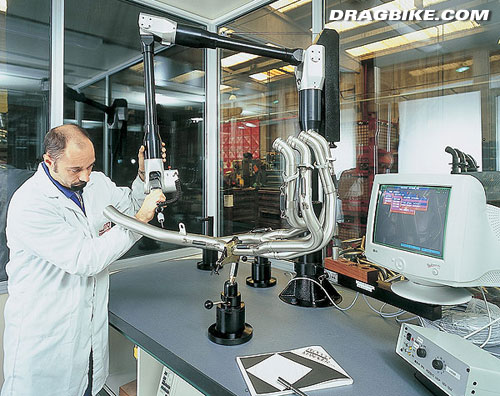 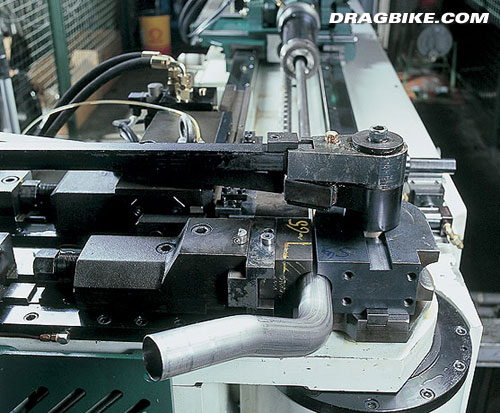 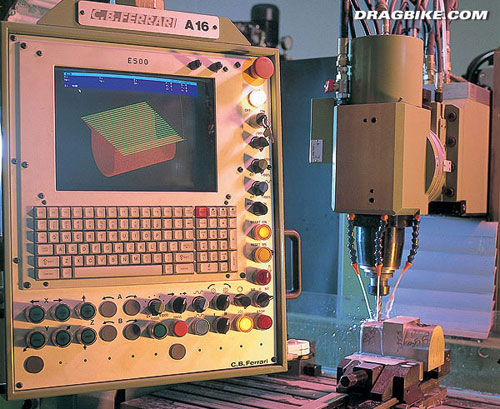 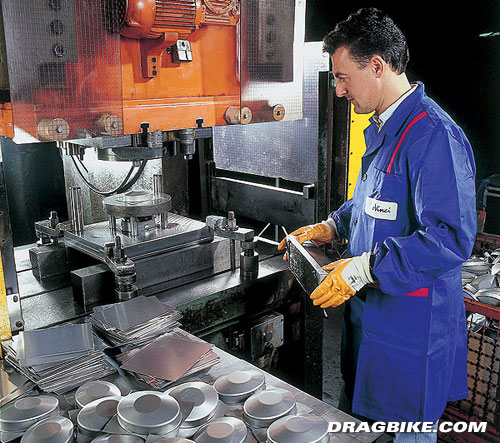 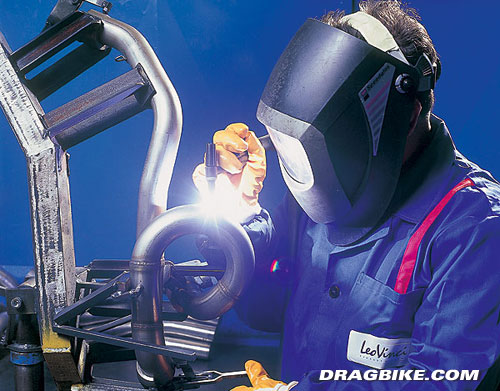 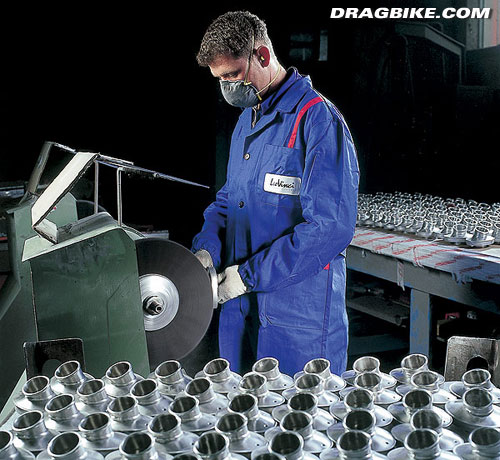 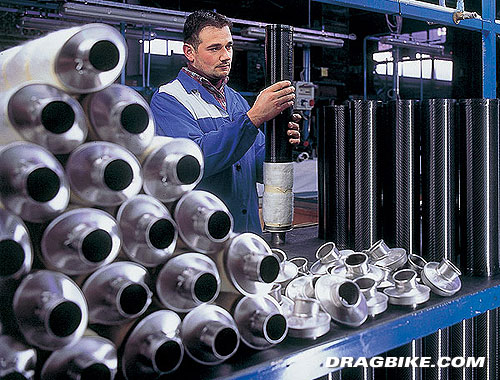 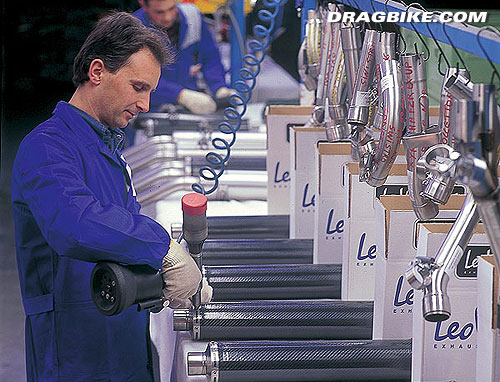