Eva Håkansson of Sweden sped into the record books in 2014 when her KillaJoule reached a staggering speed of 240.72 mph – the Fastest streamlined 3-wheeled electric motorcycle speed in history – at the Bonneville Salt Flats in Utah, USA. 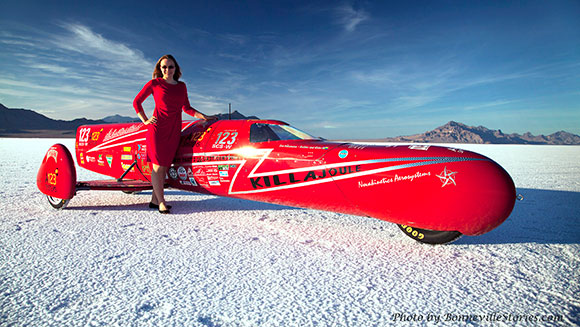 Eva, who has a master’s degree in mechanical engineering and is working towards a PhD in the same subject, designed and built the KillaJoule herself.

She hopes her world-changing achievement will show others that eco-friendly vehicles can be fast and exciting and that “women can be excellent engineers”.

Guinness World Records recently caught up with Eva to ask her some questions about the development of the KillaJoule, and what it feels like to be a record holder in the hotly contested field of landspeed…

What motivated you to build the fastest streamlined 3-wheeled electric motorcycle?

I call KillaJoule “eco-activism in disguise”. My mission is to show that eco-friendly can be fast and fun, and hopefully make people that otherwise wouldn’t be interested in low-emission vehicles be aware of their potential. Speed is a great way of showing the capabilities of battery power, because fast is always in fashion!

Electric racing is like chocolate without calories: it gives me everything I want – power, speed, and torque, without the things I don’t want – pollution and noise.

How did it all come about?

We were racing my husband Bill Dube’s dragracing motorcycle the KillaCycle, setting new records in the 1/4 mile. KillaCycle’s best time ever in the 1/4 mile was 7.6 seconds, which is very respectable in dragracing circles, but almost impossible to communicate to the public. “Huh? 7.6 seconds to what? To 60 mph? That’s not very fast”, was a frequent comment. Bill and I decided that we had to do something else to make people interested in electric vehicles. 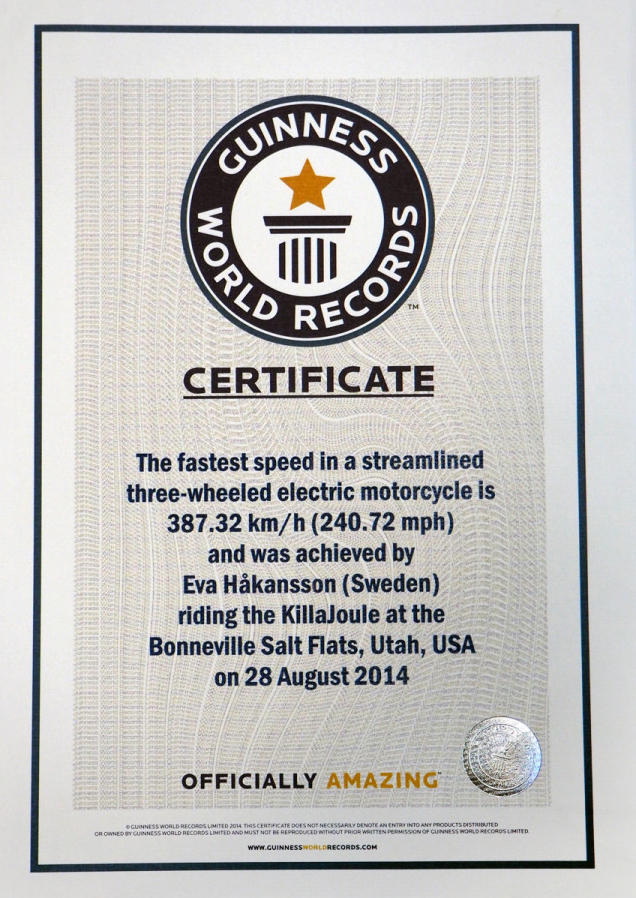 What was your goal when you first began to build the Killajoule?

I decided that I wanted the answer to the question “How fast is it?” to be at least “300 mph” (484 km/h). We didn’t have the budget or garage space for a car, so it had to be a motorcycle. After some failed partnerships with other people, we decided to do everything ourselves and finance it out of our own pockets. Never having built a streamliner motorcycle ourselves, we were ridiculously optimistic. We thought it would take about six months and a budget of $10,000. It would end up taking 10 times longer and cost us 10 times more…. but it was worth it in the end!

How much has the KillaJoule cost?

We could have paid off our mortgage if we hadn’t built the KillaJoule, but that wouldn’t have been nearly as much fun.

Did you really build the KillaJoule yourself?

About 80 percent of the hours, blood, sweat, and tears that went into the KillaJoule are mine. The rest is built by family and friends. The motorcycle is built from scratch in my two-car garage behind my house. 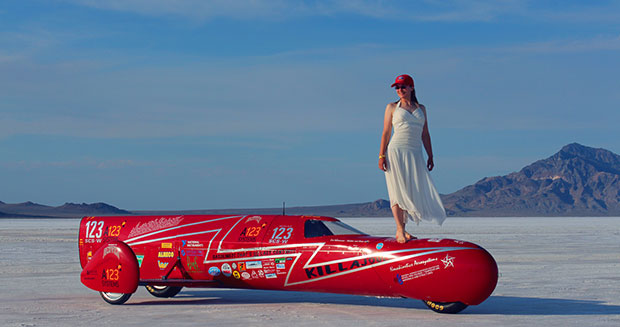 Land speed racing is the last fully unlimited racing where innovative engineering is encouraged. Most regular racing is so regulated that there is no room for innovation. Also, speed records are so tangible and easy to communicate, everybody can relate to speed. When you set a new record, you don’t just beat the other competitors at the same event, you beat everybody in the entire history! That’s cool!

What are its main differences and advantages when compared with a gas-powered motorcycle?

The real advantage of electric drive is that it is on the frontier of racing and very much virgin soil. Modern batteries, like the A123 Systems Li-Ion cells in the KillaJoule, coupled with lightweight and powerful motors and controllers available today, that were not available just a few years ago, give electric drive vehicles a surprising edge in land speed racing. 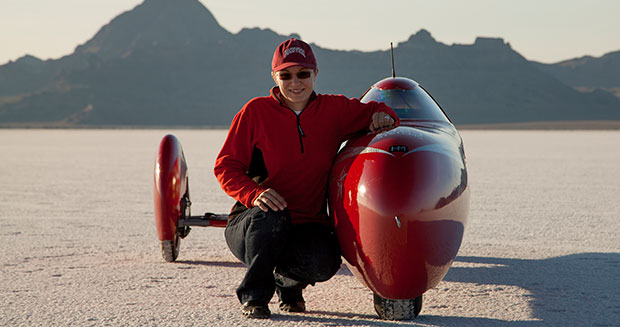 Could you give us a little insight into the technology you used on the motorcycle?

The KillaJoule is simply just a giant cordless drill with wheels. It is a motor, a battery, and a throttle, plus wheels, just the same as your cordless drill scaled up. There is no clutch, no carburetor, no transmission, no flywheel, no exhaust system, no camshaft.

The electric motor connects directly to the rear wheel with a motorcycle chain. It really does not get much simpler than that. The throttle, which is a twist grip like every other motorcycle, is the equivalent of a “volume control” on a car stereo. It is a variable resistor that tells the solid-state electronic motor controller how much electric current to allow to flow through the motor. The motor torque is directly proportional to the current (amperage) that flows through the motor.

How do you prepare for a race?

Even if I need to be quite fit for the job, my motorcycle is the real athlete. It requires “care and feeding” just like a race horse or airplane. Everything is pushed to its limits during a record attempt, so all the parts have to be in top-notch condition. With a very short racing season – the salt flats are only dry in August and September every year – the preparations for next year’s record attempt begin the day after you come back from the race.

Corrosive salt gets in everywhere and has to be cleaned out, a process that can take every evening for a month. Things that are broken have to be fixed. There are always parts that need to be painted, any little scratch in the paint on the frame and the steel starts to rust. All electrical systems have to be checked, onboard fire extinguisher system has to be serviced, flame suit has to be washed and checked, and a gazillion other things. 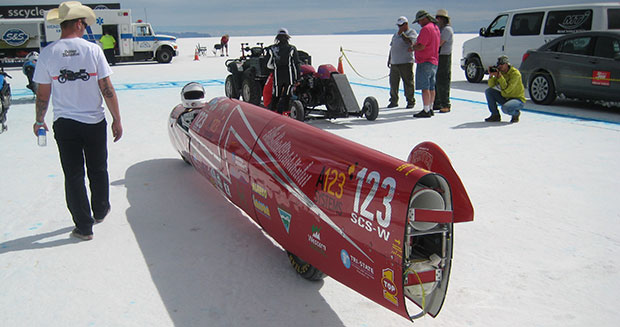 What are your aims are for the future development of the vehicle?

What does it mean to you to be a Guinness World Records title holder?

It is pretty much every racer’s dream to make into the Guinness World Records book. It is really a confirmation that you are doing something right. The confirmation is important, because there is no prize money and rarely any trophies in this discipline.

I often get the question how it feels to make a record-breaking run.  I wish I could say that it is a big rush, but it isn’t really. The closest I can describe it as a two-minute long mix of horror, boredom, and magic. Setting a new record means that I am going faster than I ever have gone before, and that the bike is going faster than it ever has. Accelerating up to a speed where I have been before is typically so uneventful that it is almost boring, but as soon as you surpass that speed you are entering uncharted territory. Years of work finally pay off, and it is like time stops.

When I have finished a run, all my nervousness and discomfort quickly vanishes and is replaced by a huge grin. I say, “Well, that was easy, let’s do it again”. 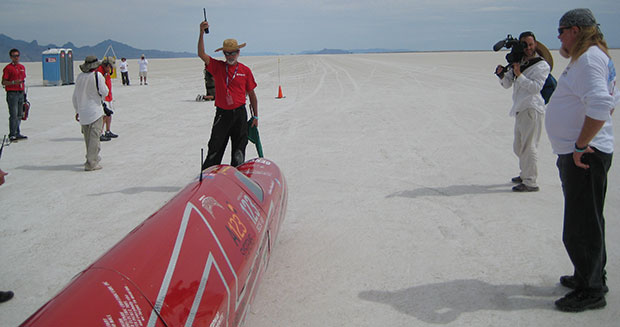 Find out more about Eva at Evahakanssonracing.com and the Killa Cycle at Killacycleracing.com