Following their 11th FIM European Championship win in 2018, the Gulf Oil Drag Racing team embarked on an ambitious update program over the winter. The plan was to investigate the effect on the performance characteristics by reducing weight where possible and test a direct drive (gearbox-less) drivetrain. The extensive program saw over 40kgs removed from the original package by way of re-machined parts, lighter replacement wheels, suspension, and brake components and all-new carbon-fiber bodywork and panels to replace the former aluminum items.

Due to a delay in the return of the race bike and trailer from their successful participation in the USA World Finals in Georgia this program was not completed until late spring, and so without time to test the first chance to take to the track was at the FIM European Championship season opener at Santa Pod, England.

The plan was to run the temporary direct-drive transmission, collect data and then plan a more permanent arrangement should the results prove satisfactory. Despite the `test only’ plan for the event team rider Filippos ‘Fast Fil’ Papafilippou qualified number 4 with a stout 6.316 secs and progressed through to the semi-finals where he ran a fine 6.175 secs @ 205.33 mph only to lose to a great 5.91 secs @ 233.75 mph to eventual event winner Rikard Gustafsson from Sweden. Fast Fil’s time was the quickest ever for a direct-drive four-cylinder Top Fuel motorcycle and the team gathered useful data for future projects. The team also hosted two special guests in their pit area over the weekend, former F1 team principals Ron Dennis (McLaren) and David Richards (BAR and Benetton) who had asked to take a look at the Gulf Oil machine and spend some time to ask questions about how it was constructed and how to tune a Top Fuel motorcycle. 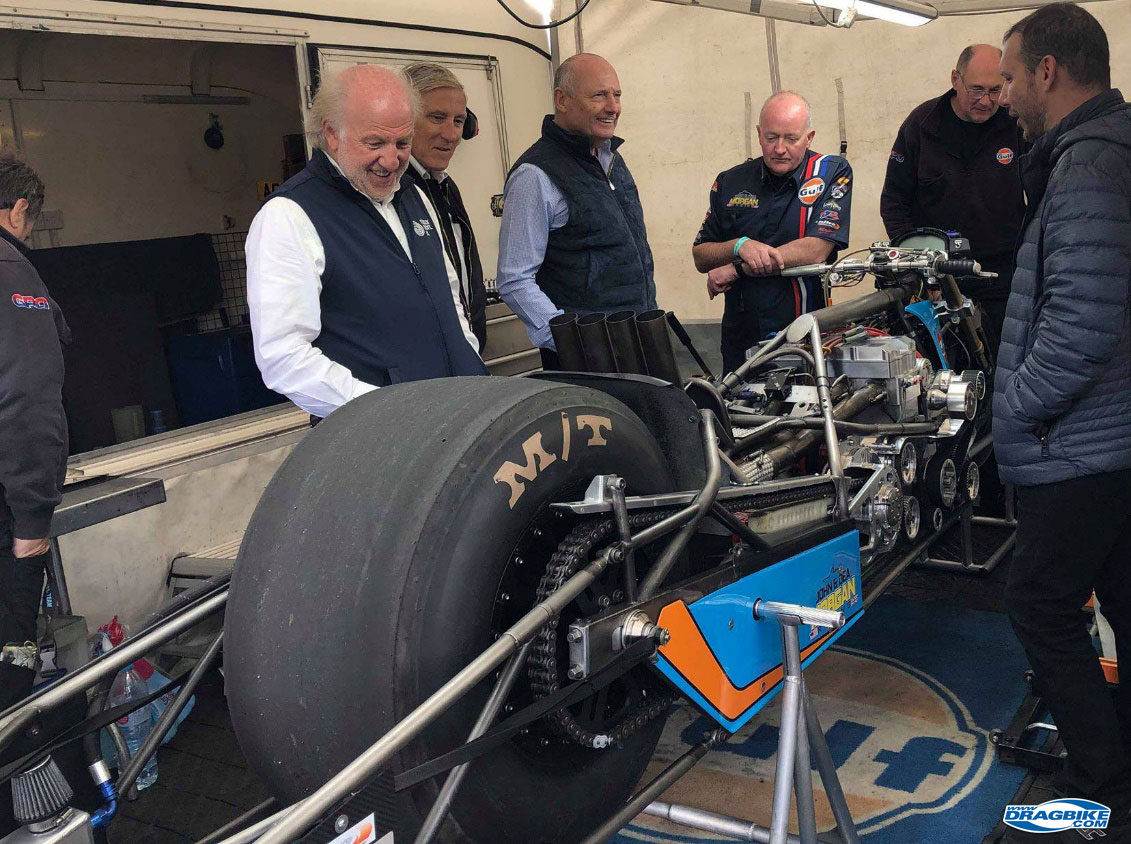 The second Championship round was staged at Tierp Arena in Sweden, the venue at which they ran their very first 5-second pass 6 years previously. The original gearbox drive system was now back in place and they looked to start their championship chase anew. And Filippos hit the ground running with an early clicked off 5.936s @ 197.96 mph to go straight into number one qualifying position and rounded off final qualifying on day two with two 5.786s runs to set a new European elapsed time (ET) record. Race day saw Filippos run yet another record run of 5.724s in round one, and a 5.783s in round two for another European record. The final saw both Filippos and Championship leader in a pedal fest in which the Gulf rider prevailed to take the event win. 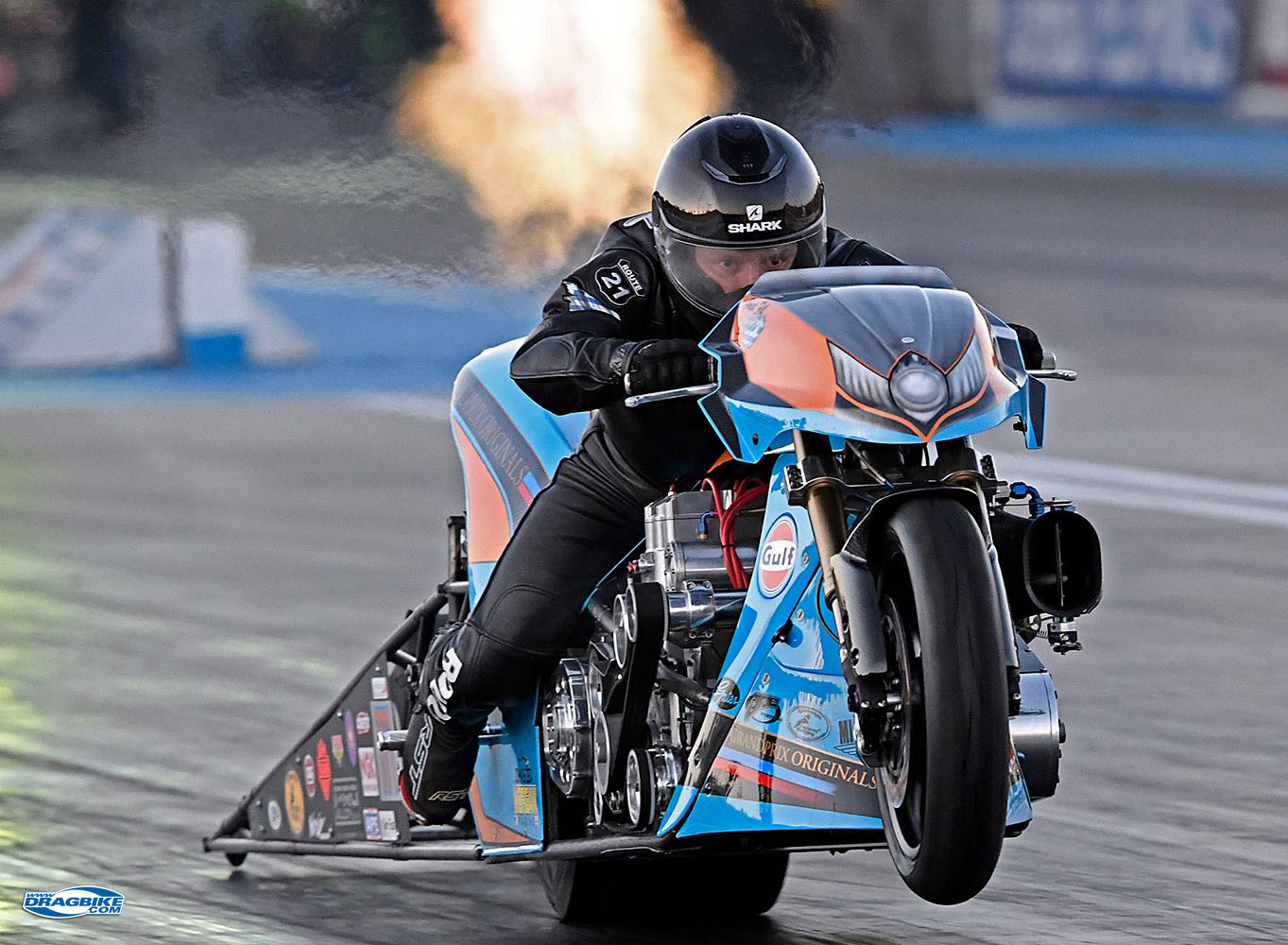 Championship round three was staged at the all-new venue of Kauhava in Finland. Despite a tricky track surface the team got the measure of it and ran a strong 5.975 @ 219.19 mph for a new track record and number one position. A best-of 5.865s @ 229.98 mph saw the team finish in number two qualifying position for race day. Rikard Gustafsson was unable to show for his semi-final, but on the other side of the ladder, Filippos ran consistently through the field to take the event win and the Championship lead. 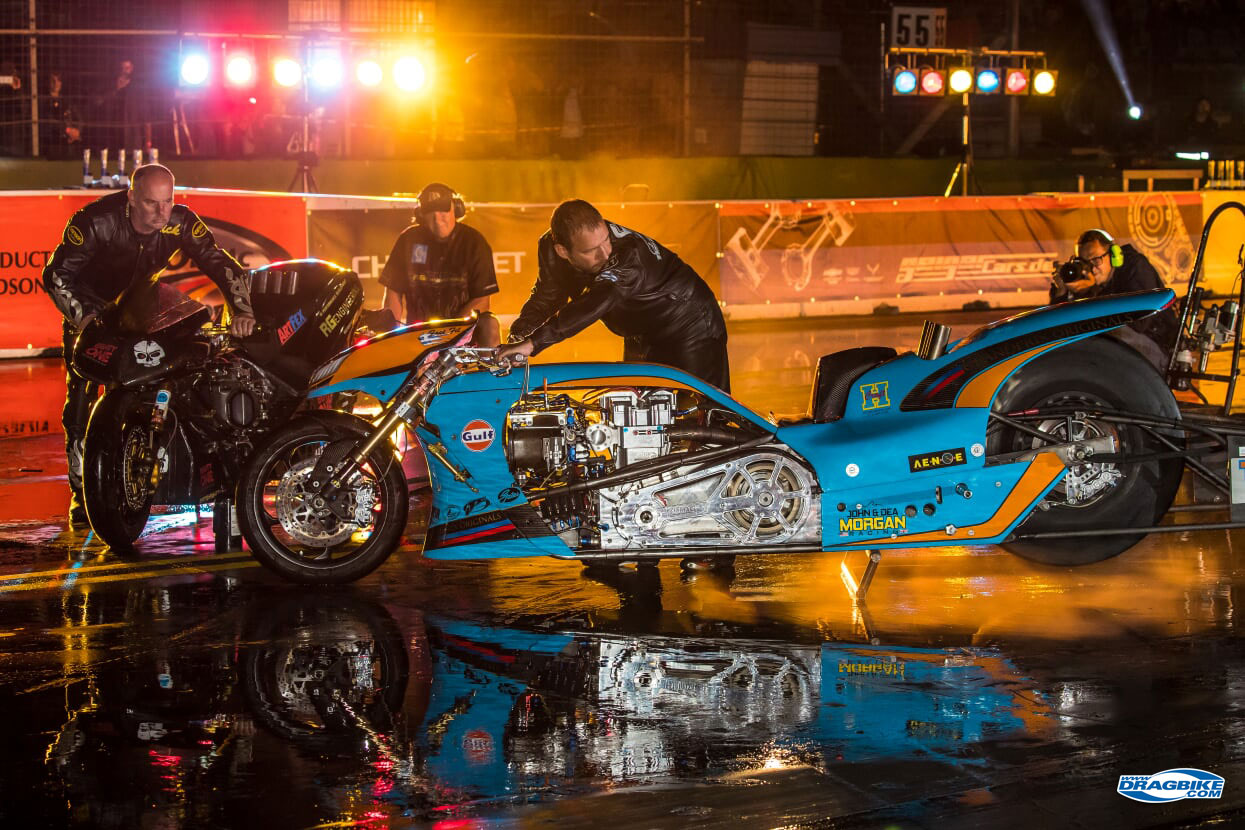 Round four took place at the atmospheric Hockenheimring, Germany in front of the usual huge crowds. Filippos ran a wary and throttle feathering 6.290s @ 184.57 to get a handle on the notoriously cambered track but took number one position only to relinquish this spot to his main opponent Rikard Gustafsson in qualifier two. Unfortunately, rain put paid to any more qualifying runs and the chance for the team to regain number one spot but rounded off the day along with Rikard Gustafsson with a fantastic two bike `cackle fest’ in front of a hugely appreciative Night Show crowd. Race day saw both Filippos and Rikard win their way through to yet another final where the Gulf Oil team saw yet another win and a small points lead increase. 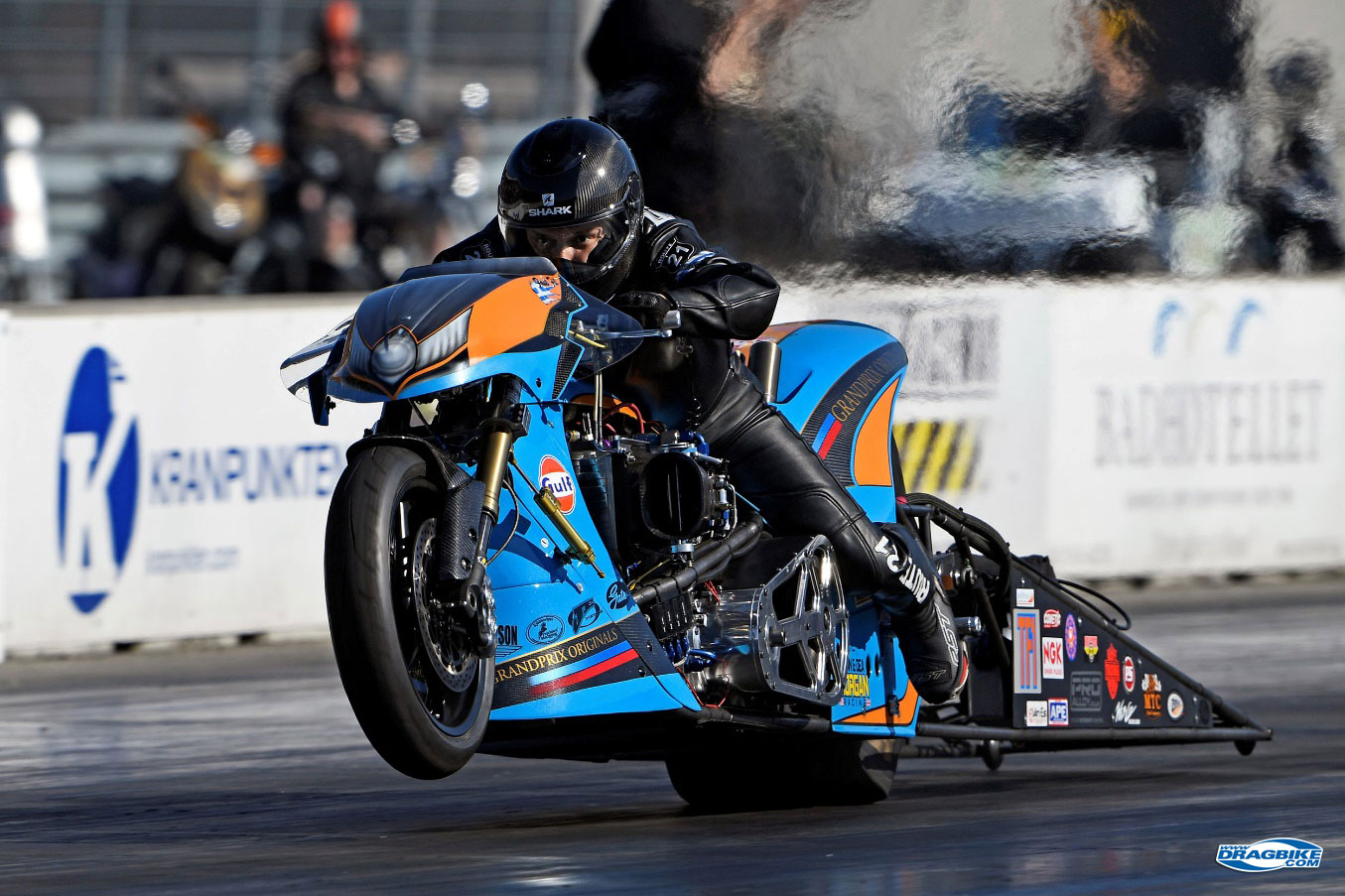 So to the final round at the team’s home track of Santa Pod in England with a slender championship lead. Despite a slow start in Q1, the team quickly addressed matters for Q2 with a staggering 5.6639 @ 233.94 mph, the second quickest pass in Top Fuel motorcycle history and the quickest run in the World for over 2 years. Q3 was even better, an amazing 5.6629 @ 246.74 mph smashing the European Record and the quickest ever backed up record in the World. Q4 was almost an anti-climax with the final run `only’ a 5.8699 @ 195.45 mph but the team retained their number one qualifying spot. Race day saw Filippos take a leisurely first-round win after his opponent Dale Leeks red-lit, whilst on the other side of the ladder the other Championship contender Rikard Gustafsson took out Malta’s Glenn Borg. In round two Filippos ran another exceptional pass of 5.7017 @ 244.22 mph to overcome home rider Steve Woolatt that secured his second, and the Gulf Oil team’s twelfth European Championship. With the Championship secured the team decided to throw the lot in with an aggressive tune to see if they could run the World’s first 5.50-second pass but it was not to be as the track was `going away’ and they lost traction. However, due to a no-show for would-be opponent, Al Smith on the unique 3 Cylinder Top Fuel machine Filippos and the team took their final and fourth Championship win of the season to continue their outstanding history of race success and their 12th FIM European Championship. 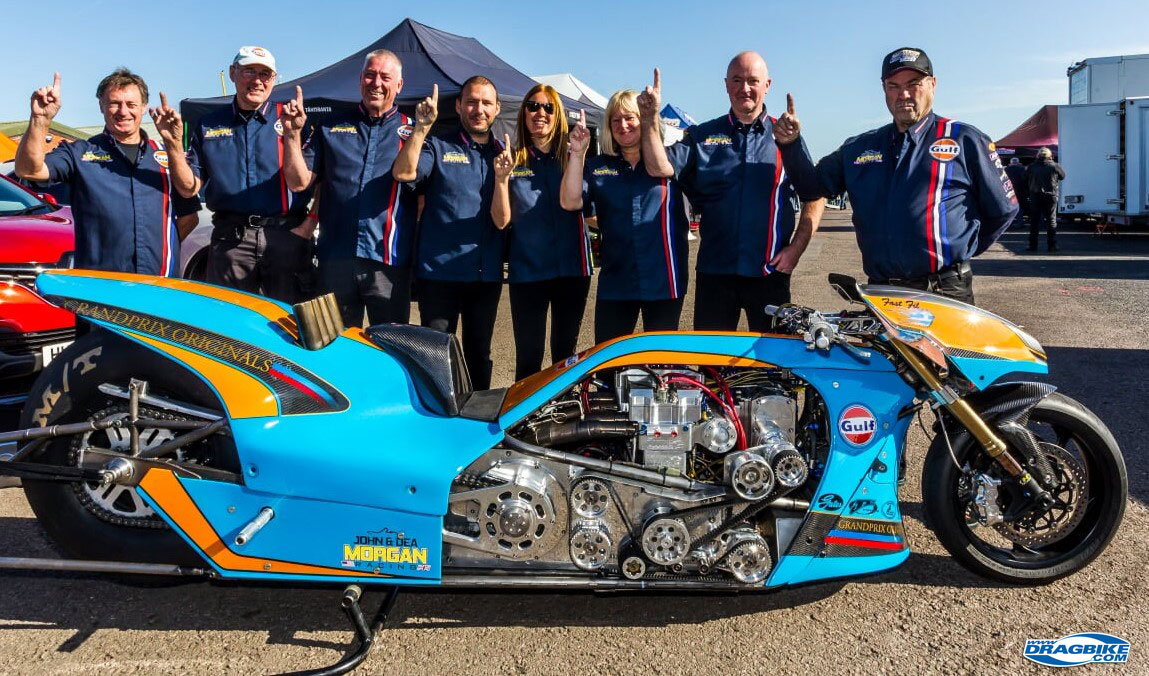 Team Principal (and former Championship rider) Ian King said “I’m almost lost for words, what a season. Four out of five event wins, a number of new European records and two out of the three quickest runs in the World ever. European Champions for a twelfth time! My outstanding King Racing team again proved their world-class provenance and Fil showed his prowess as a rider. The unique consistency and longevity achieved by the use of the best products in the field from our blue-chip technical partners and Gulf Oil products have ensured that our engine has performed faultlessly under the extremes of our sport and I’d like to thank them and all our fabulous partners for their continued support and best in class products”.

Rider Filippos Papafilippou added “The King Racing team is remarkable; their unique consistency and outstanding knowledge are truly World-beating and I couldn’t do it without them. Thanks to Ian & Debbie King, Michael Beaumont, Marius van der Zijden, Martin Brookman, Nick Pepper and Basak Dogan for their help and support throughout the season”.

The team now moves on to compete at their last event of the season, the USA Manufacturer’s Cup Championship Finals in Valdosta, Georgia, where Team Principal Ian King returns to the saddle for race duties at the venue where he made the final last year.

The Gulf Oil Dragracing team exclusively uses and endorses Gulf Oil greases and lubricants in their history-making machine. The team is extremely proud to be supported by many leaders in their chosen markets in winning the 2019 FIM European Championship: