Following their success in securing an outstanding 11th FIM European Top Fuel Bike Championship with new rider Filippos Papafilippou from Greece, the team rounded off their season with a successful return to the US with former rider and continuing Team Principal Ian King in the seat for the Man Cup World Finals. 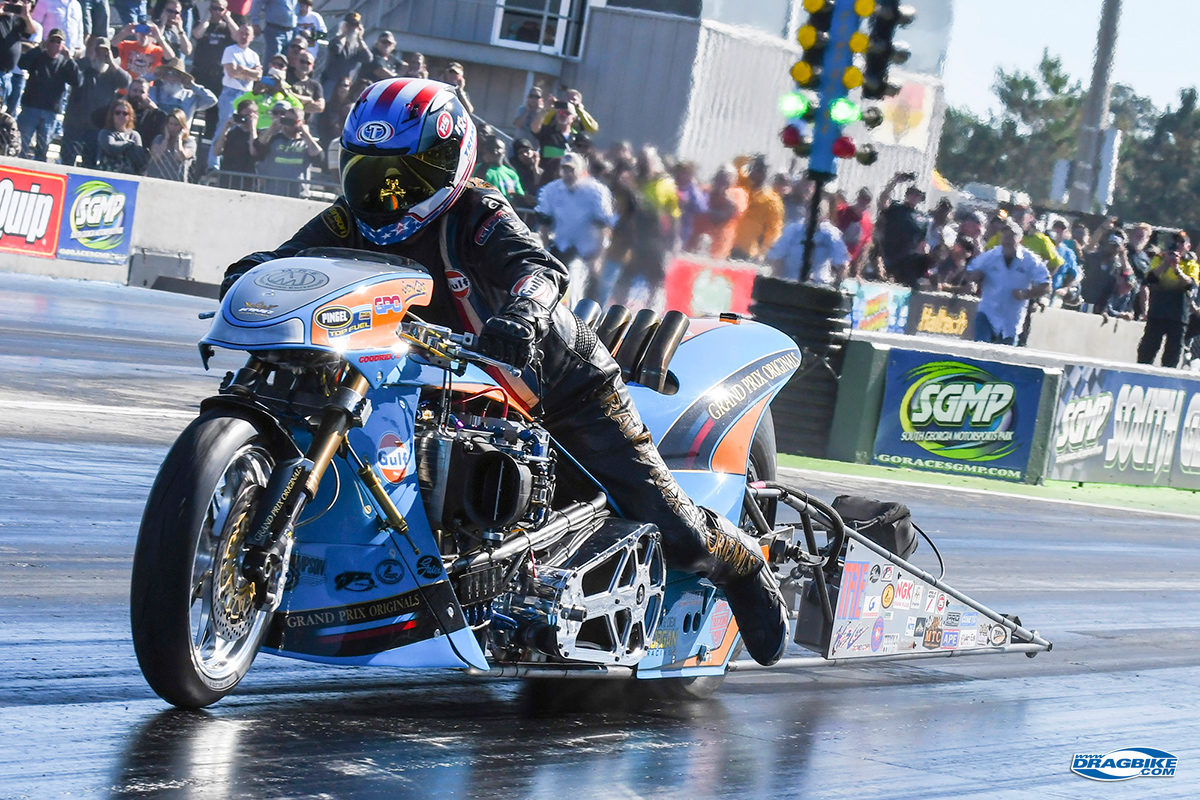 Longtime team supporters John and Dea Morgan Racing from Palm Desert California joined Gulf Oil with support from Joe Koenig of Trim-Tex, Jay Regan from MRE and Wayne and Donna Pingel from Pingel Enterprises to ensure the team made the most of the opportunity to race at the World Finals at South Georgia Motorsport Park in South Georgia, the final leg of the Manufacturers Cup season. The event saw more than 800 drag bikes competing from over the world, from Aruba, Norway, Finland, Sweden, the UK, Greece, India, Australia, New Zealand, Japan, Puerto Rico, and Canada, and many contestants, as well as fans, from the USA. 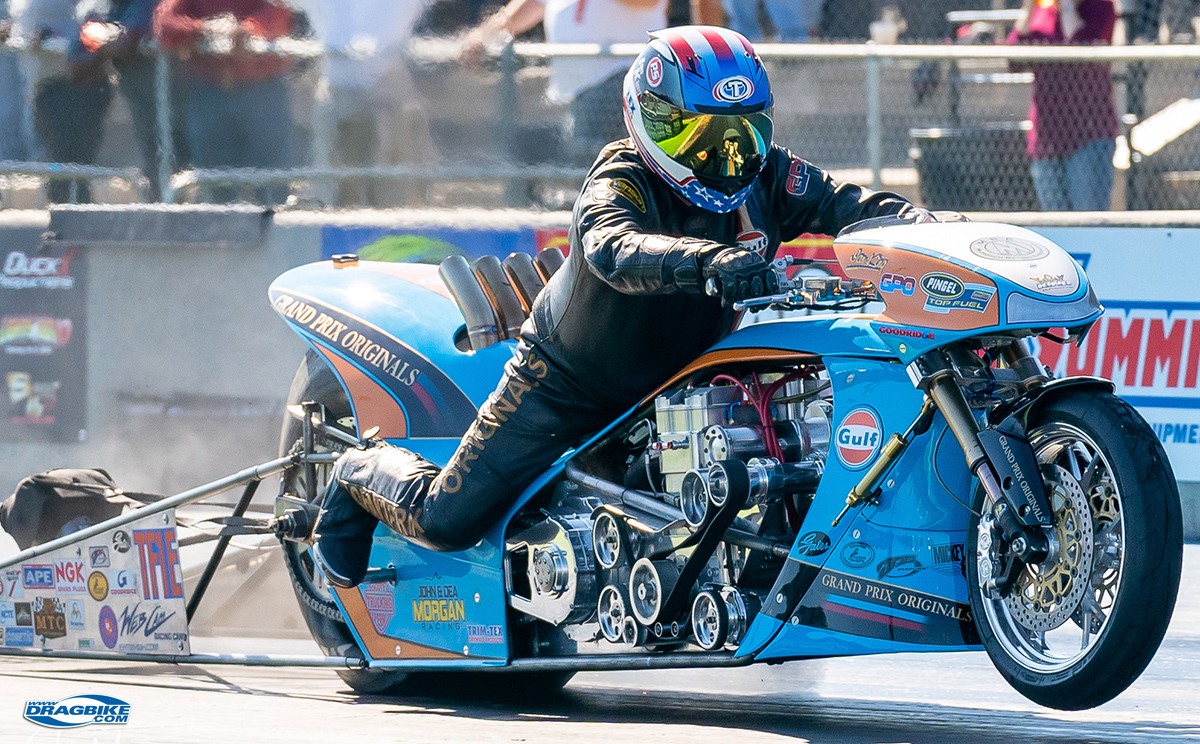 The team were eager to continue their successful season and set about tackling the tune for the all-concrete surface. However, it proved to be a tough task for all racers running slick tyres as the seemingly excessive use of track compound to aid the performances for the well supported Pro Street class proved a huge challenge for those with wide and flat tyres. Pushing back after the burnout and staging issues arose for most of the slick and bar classes and caught out the Gulf Oil team more than most who were used to the more general application used at the combined car and motorcycle events at which they compete in Europe.

Despite the challenge the team ended up qualifying in the top half of the elimination ladder, but with the most challenging route to the final of Pingel Top Fuel. 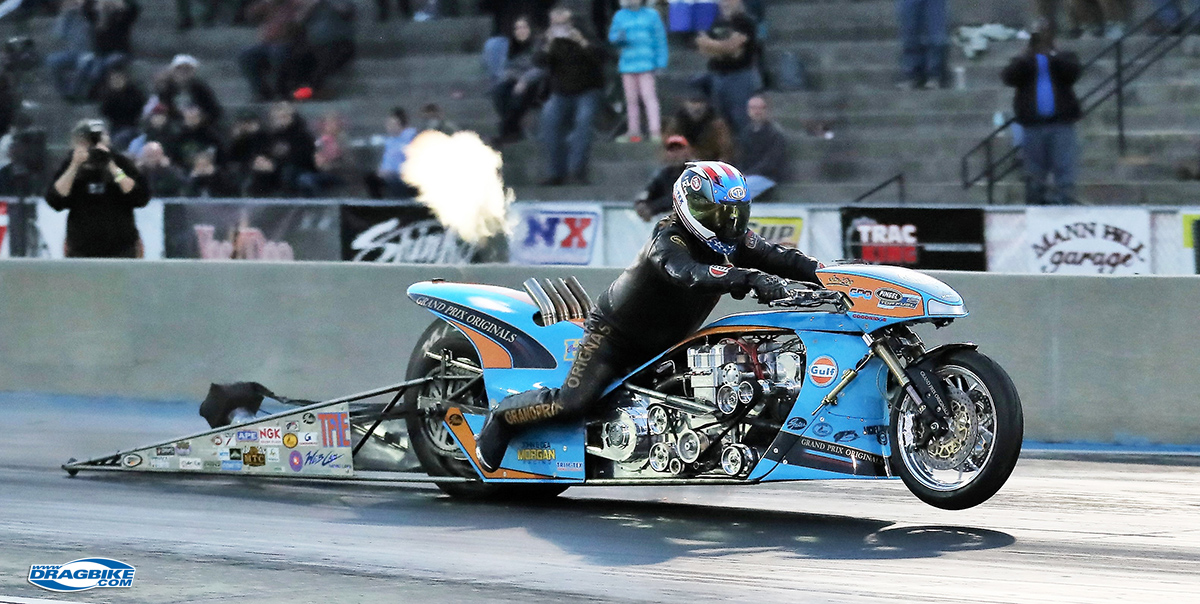 In the first round of eliminations King overcame Top Fuel veteran and US number 2 Sam Wills with a fine 5.89 @ 232 MPH, (video here below),  whilst Championship hopeful Dave Vantine was on the wrong end of a frantic pedal-fest against Sverre Dahl of Norway as they both lost traction for the entire quarter mile. Chris Hand similarly ended up with a loss against Mitch Brown who overcame Chris right at the finish. David Vantine’s challenger for the US Championship title Larry `Spider-Man’ McBride benefitted from a bye run which was fortunate for the Champion elect as he also suffered traction problems.

In the semifinals King ran yet another five-second pass to take out McBride with a fine 5.95 @ 225.33 MPH as Larry struck the tire on the launch and idled down the track. In the other round matchup, Mitch Brown ran a 6.43 @ 219 MPH to prevail over the other visiting European team of Sverre Dahl.

However, the Gulf Oil team’s consistent 5-second performance was halted abruptly in the final round. After the team made a quick turn-around to make the final run in warm conditions they then waited patiently for the Brown & Bradley team to finalize their preparations. Further delay was encountered in the staging area before the track officials gave the belated signal to run but strangely without the usual track sweeping and dragging and with dew starting to form on the track. Once again the team struggled to push back from the burnout and when King `bunny hopped’ into pre-stage (as he was unable to push the bike with his feet in the normal method) he was unaware that his rear tire had `wound up’ as he tried to keep out of full stage (tire contact patch stuck to track, but wall wrinkling up like a spring). As he looked down and released the brake to enact the idle up valve the bike inadvertently `sprung’ forward into full stage and the tree immediately run whilst King was still preparing. In any case the track conditions by then were marginal and he lost traction almost immediately whilst  Mitch Brown made a great full pass of 6.20 seconds to take the win, video here:

After an almost fairytale ending a philosophical King said:

“What a great year! After Fil (Filippos Papafilippou) exceeded expectations to secure his first and our team’s 11th FIM European Championship, to then make the final of the MFC World Finals after a year out of the race saddle was the icing on the cake. It is testament to my great crew of Michael Beaumont, Marius van der Zijden, Martin Brookman, Nick Pepper, Debbie King and the US support team of Andy `H’ Smith, John Morgan, Michael Woods, Randy Rannberg, John Edwards and Scott & Michelle Perri Roethemeier that we were able to perform so consistently all year and on two continents. I would like to thank Fast Fil, Gulf Oil, John and Deanna Morgan, Joe Koenig, Andrew `H’ Smith and Jay Regan and our fantastic technical partners who have made this year and this specific event so successful for the team”. 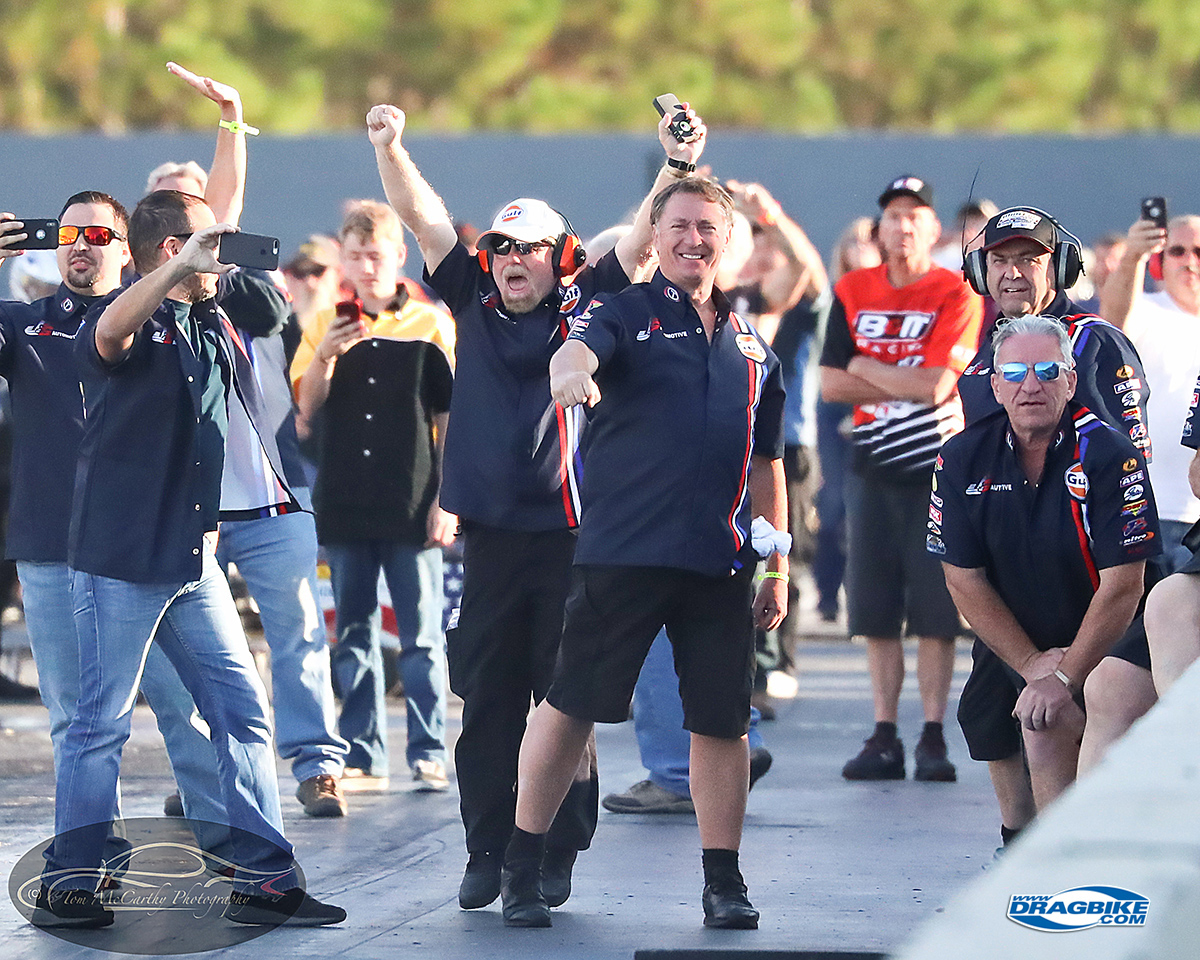 The Gulf Oil Drag Racing team uses and endorses exclusively Gulf Oil greases and lubricants in their history making machine.  The team is extremely proud to be supported by many leaders in their chosen markets in winning the 2018 FIM European Top Fuel Bike Championship: –