As has become customary for the competitive FIM European Dragracing Championship, racers headed to the final round at the UK’s Santa Pod Raceway with class champions yet to be decided.

And for the Gulf Oil – Grand Prix Originals Top Fuel team they had a seemingly simple and yet onerous task – to finish the event at least one elimination round and qualifying position ahead of the championship points leader, the Swedish RG Engineering team of rider Rikard Gustafsson.

Despite their previous event win at Hockenheim, and their record of setting number one qualifying position in every round to date, team rider Ian King was still suffering the result of a rear sprocket failure at the season opening event that Gustafsson went on to win. 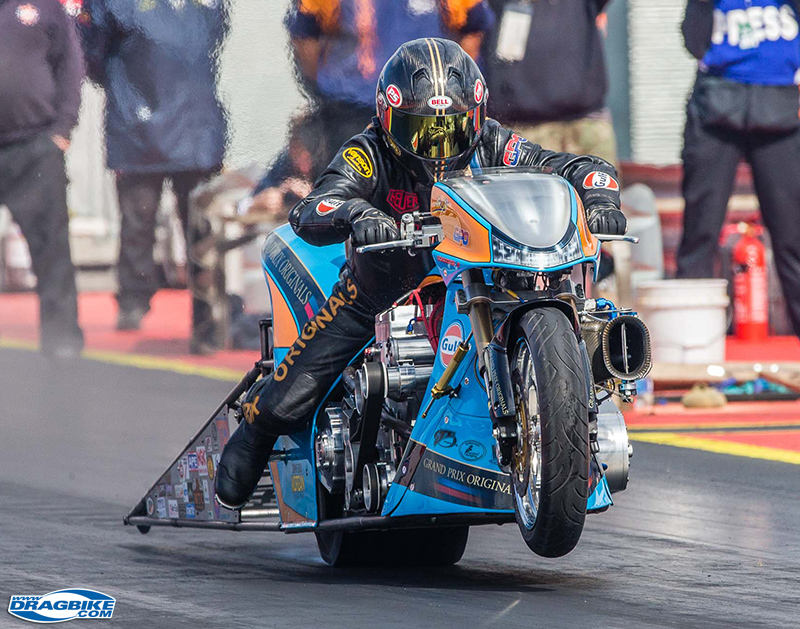 And for the first three qualifying rounds, the team were looking nervously at the qualifying ladder when an immediate loss of traction just after leaving the line resulted in a lowly 7th position compared to Gustafsson’s 2nd and the team searching for an optimal clutch setting by reducing power by way of clutch and ignition timing changes. Earlier, the team had considered the exceptionally cold track conditions to be the cause but the consistency of the problem and failure of the reduction in power applied to the track issue pointed towards a more fundamental mechanical problem.

For the fourth and last qualifying session the experienced team of Michael Beaumont, Marius van der Zijden, Martin Brookman, Nick Pepper and rider King put their heads together over the computer data and concluded that air inclusion in the secondary clutch circuit could be to blame.

The question was whether to disarm the clutch system to permit a softer but more controlled launch to improve the qualifying position (but leaving the team unsure whether air in the system was to blame when heading into first round of eliminations) or dismantle the system, bleed the system through but risk missing the final qualifier and the chance to improve final position. It was left to team rider King to make the final decision, and the team feverishly dismantled the clutch control system prior to conducting the tricky bleeding procedure. 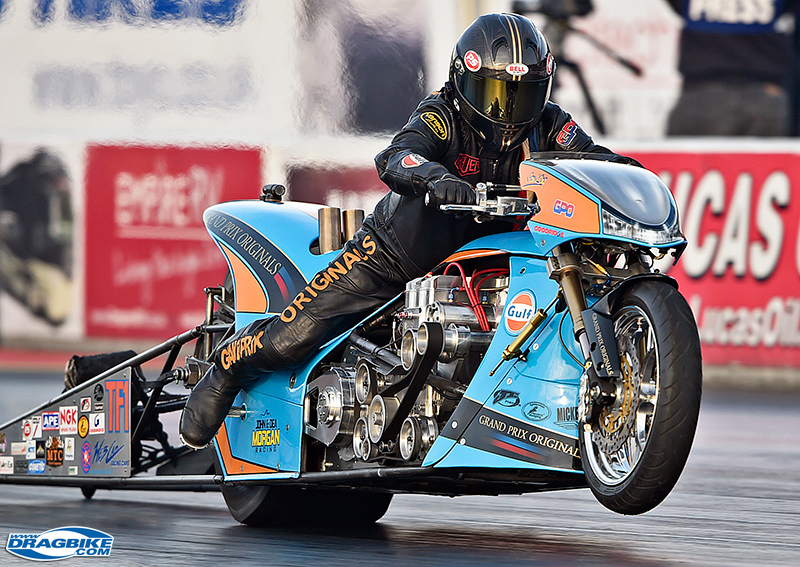 The ever efficient team conducted the task in time to make the final qualifier but elected to leave the soft clutch and ignition settings in place. They watched King launch with some trepidation – was the problem fixed…..? Indeed it was, and some! King blasted straight into the number one position with a storming 5.90 second pass at a stunning 242.77 mph – the fastest speed ever outside of the USA and comfortably one half of a new European record (a second run during the event must be recorded within 1% of the mark for a new record to be set, or the faster run can back up a slower run if both are faster than the existing record). 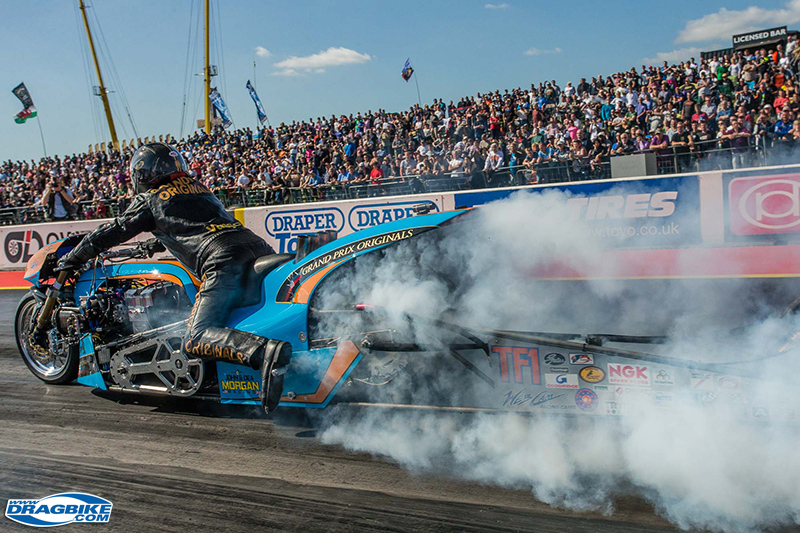 The team were ecstatic, their hard work had paid off and they were back on track in their chase for a ninth championship crown and a possible new European record to add to their British records.

Elimination day dawned bright and warmer than the day before, and due to exclusion of other class riders for failure to run the mandated sub seven second pass requirement, King enjoyed a bye run in his first round. The team are not known for taking an easy green light stage win and elected to entertain the huge home crowd with another five second pass, a 5.944 @ 236.21 mph, again with the `soft’ settings. Although slower than the previous run, the speed was fast enough to be backed up by the 242.77 mph run in eliminations for a new European record. 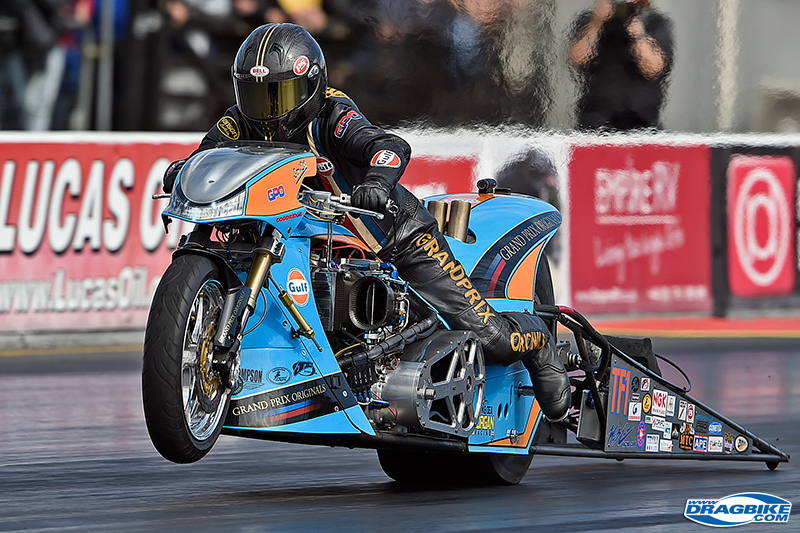 Happy with the track conditions the team decided to put some power back in the bike for the semi-final against the Dutchman Rene van den Berg. However, the race was nail-biting right until the finish line. King launched harder and faster and quickly pulled a lead only to lose traction mid track as he overpowered the track. King `feathered’ the throttle in an attempt to hook the huge rear slick tyre up but in doing so saw van den Berg move ahead. King cracked open the throttle hard again and started to catch up again only for the bike to make a move towards the centre line. King feathered again, straightened up and nailed the throttle in an attempt to catch van den Berg. At the last King just edged in front to take the win by just 0.106 seconds. 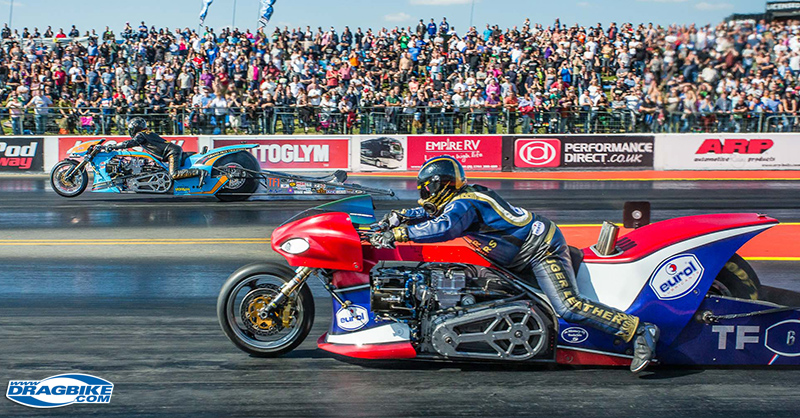 On the other side of the elimination ladder Gustafsson had made his usual relentless and consistent progress to the final. Despite the additional points awarded for King’s number one qualifying position and his new European record the winner of the final would be the new FIM Champion.

Not wishing to repeat the tyre smoking event of the previous run the team erred on the side of caution and took some power away from the Gulf Oil machine for this tough final. It proved once again to be the right call when King overcame the usual fast leaving RG Engineering machine before the eighth mile mark and powered on to take the event win with a 6.058 second @ 231.57 mph pass.

A stunning finale to the season, the Gulf Oil – Grand Prix Originals team qualified in number one position at every championship event, won the European Finals event, set a new European record and won their ninth FIM European Championship title in doing so! 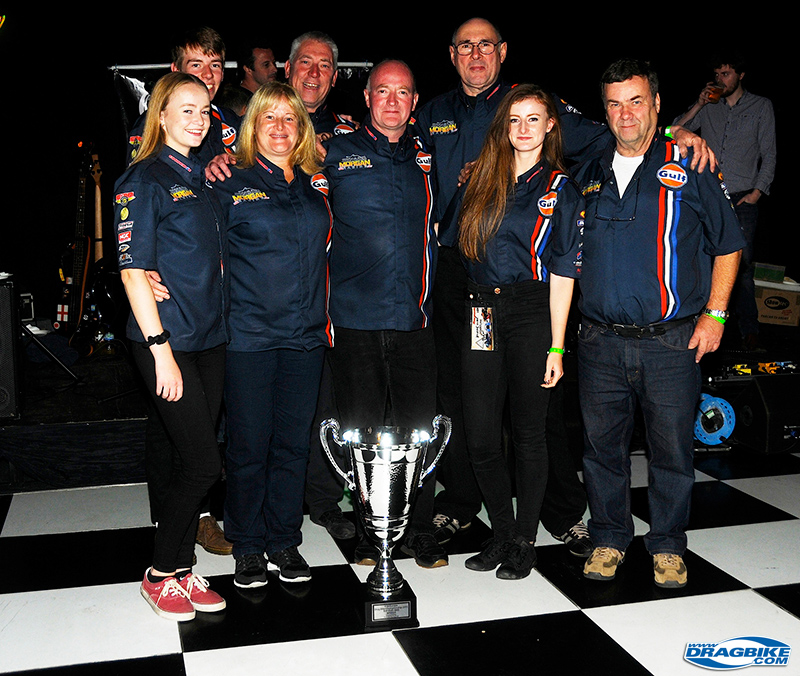 The live web coverage from the race day is archived and can be viewed here:

“I am extremely honoured to be a part of the success of Gulf Oil and Grand Prix Originals and all of our `blue chip’ product sponsors who have come together to make this another record breaking season. Once again our bike has been unbelievably reliable, testament to the quality of the world leading parts supplied by our fantastic team of technical partners and successfully implemented by my talented and hard working technical team of Michael, Marius, Martin and Nick, once again proving their class in securing this ninth Championship” said King.

“I am particularly thankful for the wonderful support and products provided by Gulf Oil and Grand Prix Originals. Frank and Caroline at Gulf, Stefan and Marco at GPO and Simon at Chicane are key to this extended team effort. I’d like to thank my family – Debbie, Georgina and Alex for their hard work and sacrifices and our fabulous fans from around the globe who support us and provide the motivation to repeat our success at the highest level.”

“Thanks to the Federations of the respective countries, the FIM-E officials, the staff of commercial rights holder Trak Bak Racing, the organizing clubs and their unsung heroes – the hardworking administration and technical staff, track preparation and safety crews.”

“Last but certainly not least, the sublime event coverage, race reports and pictures from Ivan Sansom, Rose Hughes, Stefan Boman and the staff of Eurodragster, and the superb track announcers who build the excitement and provide a valued and informative perspective for the fans.

The Gulf Oil – GPO Dragracing team uses and endorses exclusively Gulf Oil greases and lubricants in their history making machine. The team is extremely proud to be supported by many leaders in their chosen markets in setting a new European record and winning their 9th European Championship:-