HomeTeam ReportsGulf Oil Dragracing Kicks Season off with a Bang!

Gulf Oil Dragracing Kicks Season off with a Bang!

Gulf Oil Dragracing Kicks Season off with a Bang!

After their foray in the USA Manufacturers Cup series in 2017 the team returned to the opening round of the FIM European Championship with a new rider and significant changes to their traditional tune.

Greek nitrous Pro Mod rider Filippos Papafilippou aka `Fast Fil’ steps into the seat traditionally filled by 10 time European Champion Ian King, whilst King continues to run the team with his experienced crew formed over almost two decades. With Filippos fulfilling riding duties in the European Championship King will still be seen in the seat for some of the additional events including the 115th Anniversary HD event in Prague, Goodwood Festival of Speed and the Manufacturers Cup Finals in Georgia, USA in November. 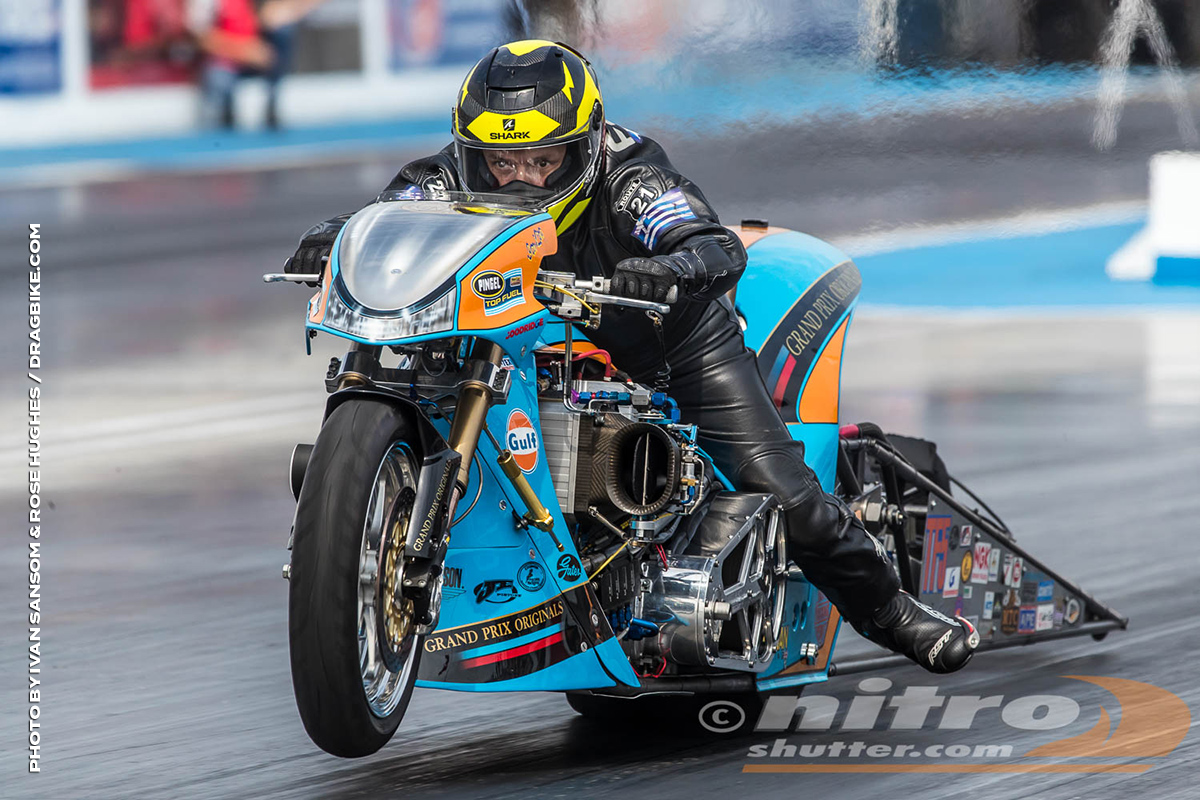 However, any illusions that the team had for Filippos to spend a few events getting the feel for riding the 1500HP machine (and prescribed first-half pass) were quickly dispersed when he ran an outstanding 6.099s @ 214.08mph on his very first pass on a Top Fuel Bike to put him immediately as number one qualifier, a position he did not relinquish for the entire event.

But the best was yet to come when he ran a fantastic 5.783s @ 236.16 in only his second ever run on the bike, the changes the team had made to the bike over the winter clearly working and with Filippos a `rookie’ but competent rider able to handle the new tune. 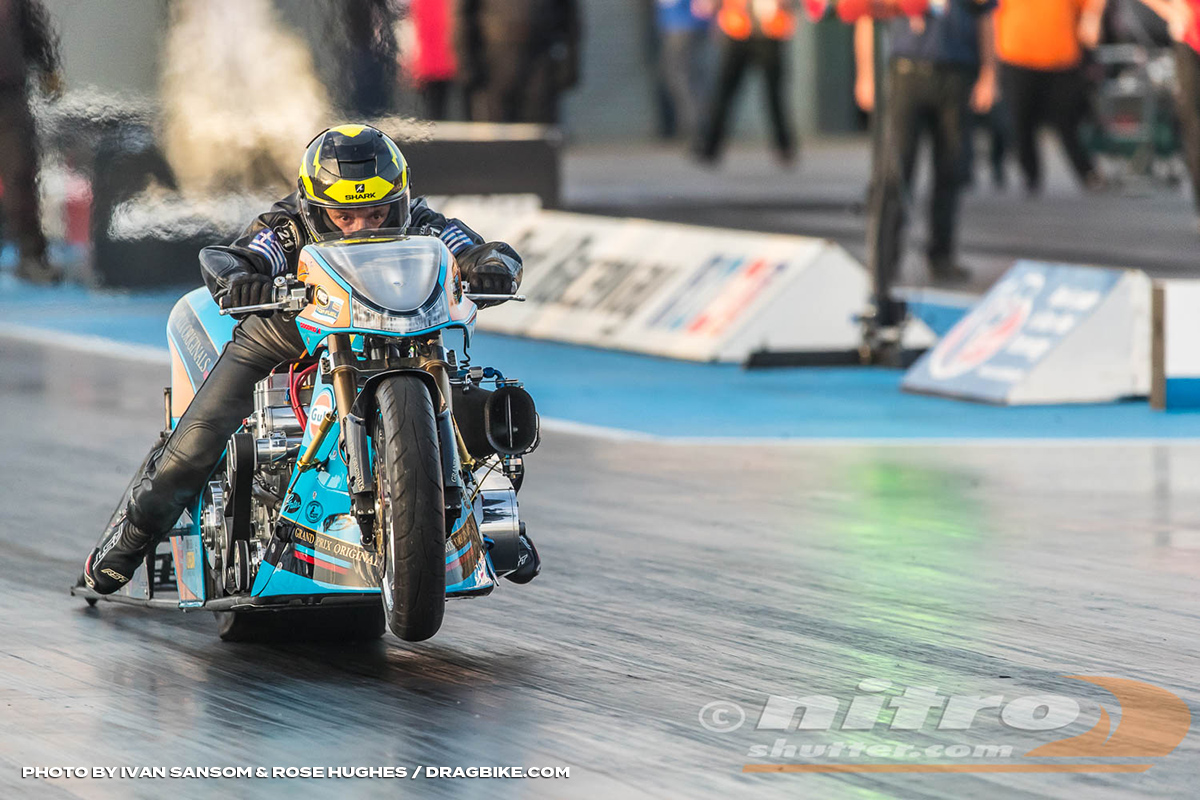 Day two saw further quick qualifying runs of 6.16s and 6.041s, and the team looked forward to eliminations and a first round against Swedish Funnybike rider Thomas Petersson. A timing malfunction saw no times recorded for their matchup but a clear winner in Filippos who progressed through to a semi-final against UK `New Age’ Funnybike rider Lorcan Parnell on his unique Puma Powered twin turbomachine. Despite a fine 6.74s @ 218mph for Lorcan it was no match for the supercharged nitro Puma which ran 6.25s @ 195.55mph that saw Filippos to the final against Swedish rider Rikard Gustafsson (who had earlier set a new European Speed record).

The final was a nail-biting affair for the Gulf Oil team, but Filippos took the event in his stride with a 6.017 @ 227mph (despite the chute being deployed just after the 1/8th mile) to see off the current FIM European Champion on a similarly powered nitro Puma 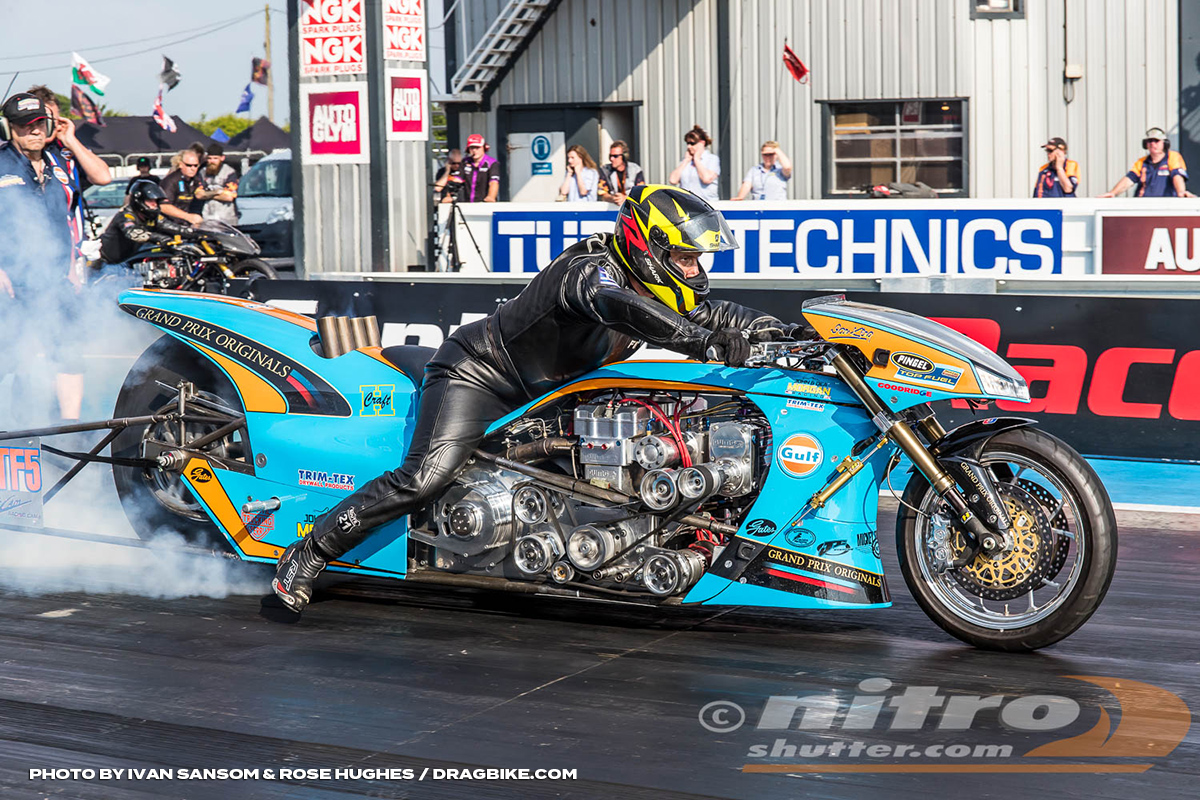 Filippos takes his lead in the championship to the next round in Hockenheim, Germany for the NitrOlympX but the next outing for the bike and team will be at the Harley Davidson 115th Anniversary event in Prague, Czech Republic in conjunction with Lubrand followed by the Goodwood Festival of Speed the very next weekend, both events with Ian King assuming his regular riding duties.