The Gulf Oil Dragracing team piloted by Ian King will be featured on the Discovery Channel program  – Megaspeed – currently airing in Canada.

The program will be syndicated on Discovery Channel worldwide in the near future, look for their feature on Season two’s episode #1. 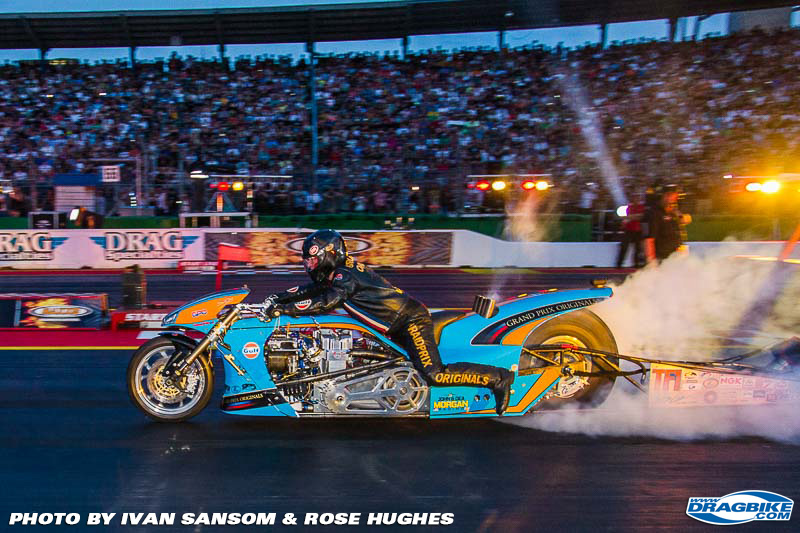 The Indianapolis 500 is one of the most iconic racing events on the planet, it’s a race everyone wants to win and James Hinchcliffe is no exception. But with just one week to go before qualifying for the 2014 event, the Oakville, Ontario native is in a hospital bed recovering from a severe concussion.

Hinch, as he’s known to fans and friends, has the backing of one of the most successful teams on the circuit and his car is definitely fast enough, but it all comes down to whether he can recover in time to qualify for the big race.

This speedy episode will also scream down the quarter-mile at the Nitro Nationals as the top fuel funny cars top out at 300 miles an hour. One of Britain’s top stunt drivers rears his van up on two wheels for a television commercial, and we take a McLaren P1 for a test drive on the world famous Silverstone race circuit.

The North West 200 in Northern Ireland is one of the world’s fastest and most dangerous road circuits. Alastair Seeley is a local hero, and the 34 year-old desperately wants to break the record of 15 career wins at the North West. He’ll have a chance to win at least five more times on the weekend of racing if he can avoid crashing.

Formula 2 boat racer, Tammy Wolf is taking on the big names in a Formula 1 event on the St. Lawrence river on the Ontario/Quebec border. If Tammy has a good showing she’ll be able to move up a class.

Larry Larson is out to retain his title as World’s Fastest Street car, a smart car that’s been transformed into a dragster, and a jet powered truck tears it up on the quarter mile.

The Targa Newfoundland rally is one of those events that every racer puts on their bucket list. Not only is the race extremely challenging as it weaves through narrow village roads, but it’s also one of the most picturesque races as it hugs the Atlantic Ocean on Canada’s most rugged province. As you’ll see in this episode it’s not necessarily the fastest driver who wins the Targa, it’s the one with the car still moving at the end.

The Lindberg brothers might be the fastest siblings on the ¼ mile ever! Jonnie recently shattered the world record with a speed of 272 miles an hour. We try to catch up with Jonnie and his brother Johan as they try and seal the European Championship.

This episode will also take it off-road with the Lucas Oil dirt championships, test a state of the art electric motorcycle against its gas cousin, and see how a pair of drivers survived crashing over a cliff.

When it comes to Pikes Peak the numbers are staggering; 156 turns, 12-miles of zig-zags, a starting position at over 9000 feet, and a summit finish line at 14,115 feet. The Pikes Peak International Hill Climb is unlike any other race in the world; it’s not just racing against other drivers – it’s competing against the mountain.

In addition to following an electric car in its attempt to break the battery powered record, we’ll be there as a father and son both try to break the magical ten minute mark.

Shamwreck can be compared to a demolition derby, but the drivers are actually racing around a half mile track. The kamikazes behind the wheel throw out the rule book and basically bang each other all the way to the finish line.

This episode will also feature the ultimate in 50’s and 60’s hot rods, a world speed record on water, and stadium super trucks that tear it up on the Las Vegas strip.

Nurburgring is regarded as the most dangerous racetrack in the world – 170 turns spread out over 25 kilometers in Northwest Germany. Every year, more than 200 cars, in four classes, attempt to tame the track in the 24 hours of Nurburgring. This year the Aston Martin 007 team will attempt to crack the podium usually dominated by Audi, Mercedes and Porsche. The British factory team has never finished the grueling 24 hour race, but just finishing won’t be good enough for them this year.

When it comes to drag racing, age is just a number as we follow a 79 year-old dragster as he attempts to become the fastest drag racer in North America.

Minimotos are two-stroke miniature motorcycles that serve up a unique brand of speed and carnage. We’ll follow two of the sports stars as they race around a tight circuit in Northern Ireland.

On an air strip at a Colorado airport the world’s fastest street cars duke it out in an attempt to break the world record of 219 miles an hour over a half mile. Lucas English is the current record holder in his beefed up Nissan GTR, but his competition is in his rear view mirror and gaining ground. They call the event the Air Strip Attack and it features traditional standing start drag racing, along with the extremely challenging rolling start events.

Figure 8 racing is like nothing you’ve ever seen before as cars race on two ovals that actually intersect. You can only imagine the chaos as cars essentially fly through an intersection at 80 miles an hour with no one stopping to give way. Speed is almost as important as surviving.

We’ll go sideways at the Formula Drift championships in California, jump on snowmobiles and race on clay, and meet two Swedish sisters aiming to be the fastest on two wheels.