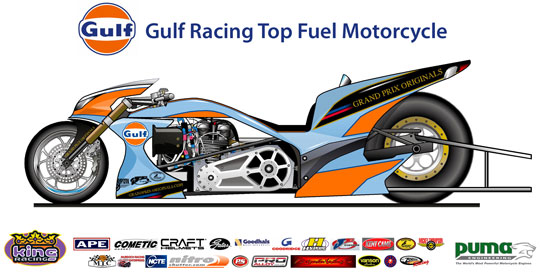 In the second of our series of articles, Puma Engineering and King Racing bring you a step by step pictorial history of the build of the state of art Gulf Oil / Grand Prix Originals Top Fuel motorcycle.

The design brief was simple, to build the most advanced machine of its type in the world using the very latest technologies from the workshops of Puma Engineering and the team’s blue chip associate partners. In part one we described the state-of-the-art power plant and induction setup to be used. However, it does not matter how much power produced if you house it in a poorly designed chassis. Chassis design is key to effective transfer and control of available power. Other significant design considerations are location of major components and drive control systems in order that effective use of space is made, and to permit easy maintenance between rounds and between races.

Puma designs are of a `Singular’ platform rather than `Modular’. That means that the design of the entire chassis is made from headstock to rear axle, using optimal geometrical lines and force factors. Some previous constructors favoured the Modular approach where the chassis was considered in two sections, engine bay and rear wheel frame. The Modular approach is more suited to where a range of different engine combinations may be offered on a similar platform, whereas the Singular is more technically appropriate for one-off designs.
Material choice for the chassis is hardly a surprise to those familiar with race vehicle construction, the tried and tested 4340 CrMo was used throughout using mainly 1 & 7th” tube and box section.

All Puma chassis designs are bespoke, and take into consideration the height, weight and length of the rider’s legs, upper body and arms. It is important the rider feels `at one’ with the chassis, affording best control of the bike in `difficult’ situations. Most TFB riders do not lack confidence in their ability to ride quick and fast in a straight line, but what happens to their control when things start to go awry is of most importance.

In the case of the Gulf Oil bike a wheelbase of 102 inches was chosen with a 14 inch rear wheel. The wheelbase is not extraordinary, but engine location for best weight transfer coupled with the planned rider’s size deemed this to be optimal.

Maximum chassis width at the rear is 24 inches, with the engine bay slightly slimmer at 22 inches maximum. This makes for an extremely slim chassis and takes into account team rider Ian King who does not have particularly long legs but prefers to use `leg push’ to control the bike more than `body steer’ used by taller riders. 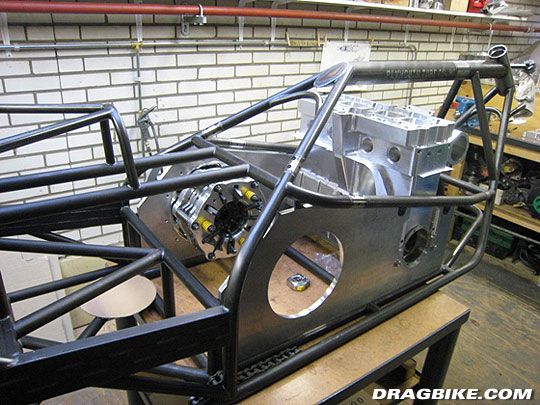 The top chassis tube construction is generally the most controversial subject in Top Fuel Bike design. A single large diameter tube has been `de rigueur’ for many years but a two, three or even four tube design has been chosen by other designers. For this bike a removable single top chassis tube of 2.5 inches was selected, proven in simulation and practice, simple and aesthetically pleasing (at least at Puma). The total height of the chassis was designed to be 27 inches above the ground – not particularly low profile but a good compromise due to engine stroke, rod ratio, valve train arrangement and maintenance considerations. 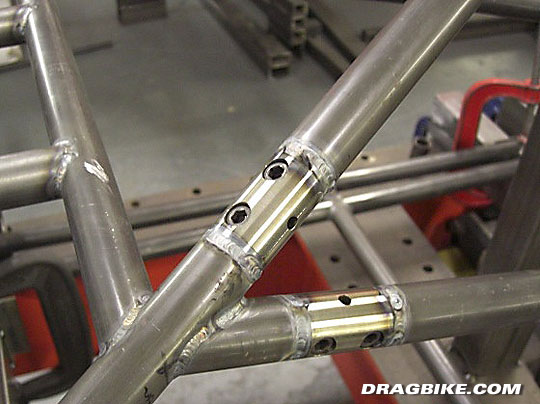 Both engine side spars are also removable, utilising the same clevis joint arrangement for optimal strength and function. This construction, in combination with `Veed’ engine mounting plates, affords quick and easy removal of the entire engine with the minimal disassembly of ancillaries. 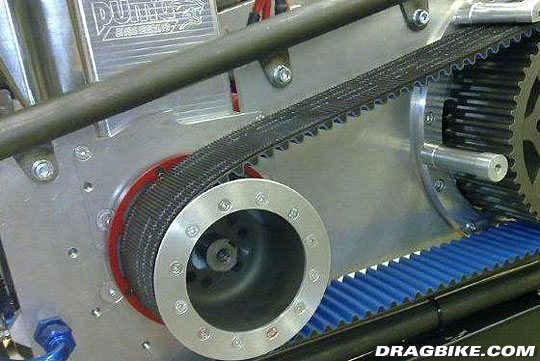 Although `Veed’ plates are not new, they are usually left open but Puma have improved on the design by designing removable sections that will afford the same level of strength in the plates as those without cut out `Vees’. 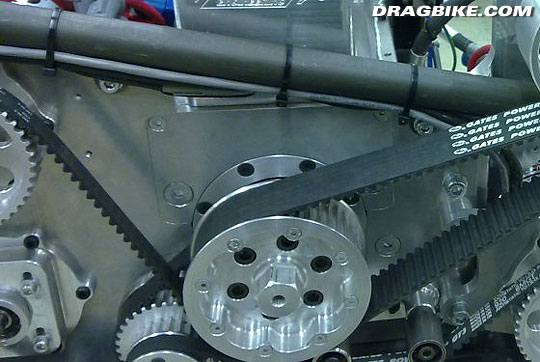 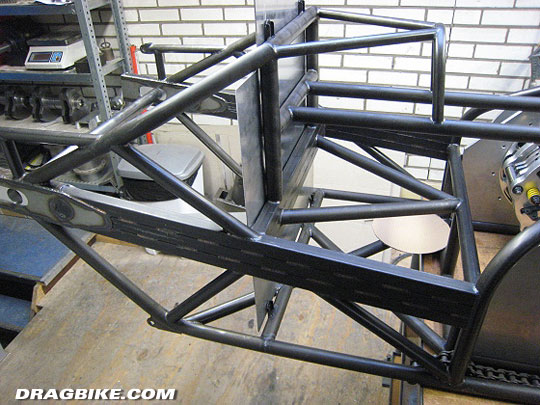 One area of the chassis of most consideration is around the rear wheel and axle. This area is under enormous torque load during a run, so much so that it is not unusual for the standard 1” and 1 ¼” axles to bend and is generally the root of handling problems on high powered dragbikes. Puma spent a lot of effort to develop a chassis `fortress’ around the wheel, using their signature (but controversial) stitch welded triple box section wheel spars and 35mm rear axle assembly in combination with a flat bolted plate that doubles as a splash guard in front of the rear wheel. Whilst not being the most elegant of constructions this is easily the strongest of dragbike chassis designs in this area.

The use of a larger than normal axle means that typical off-the-shelf dragbike wheels are unsuitable, and the standard Performance Machine side drive wheel hubs were discarded and replaced with Puma items utilising incredibly low friction ceramic bearings from Dave Conforti of the industry leader Worldwide Bearings.

Both front and rear tyres are from the Cooper Tire family, the front an Avon VP 2 Xtreme treaded tyre, and the rear the ubiquitous Mickey Thompson 3073M ET Drag Motorcycle slick. The front tyre is an ultra high performance track and street tyre for Superbikes, rather than the usual road race slick seen on other machines and was selected for its high stability at high loadings. Slick race front tyres are developed for light road race machines, not the heavier and harder brake loading Top Fuel Bikes. The rear Mickey Thompson slick tyre has proven itself to be the best choice for the quickest and fastest motorcycles on the planet, used to set multiple records on all continents. 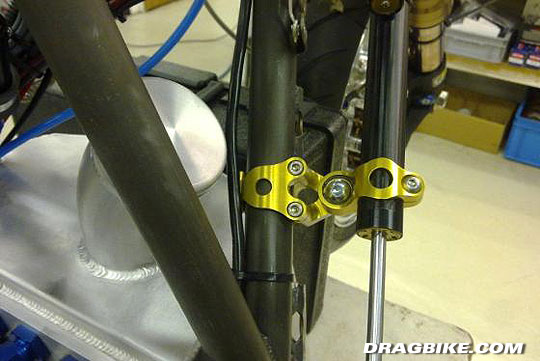 Front suspension and steering damping are courtesy of Hyperpro, the leading supplier of progressive suspension units for motorcycles. They took the standard Showa forks and reworked them with springs better suited to the dynamics of the bike characteristics, shortened, revalved and with heavier oil. A pair of 140mm stroke linear CSC units – fast becoming the damper of choice on high performance dragbikes in Europe – was chosen for steering damping. 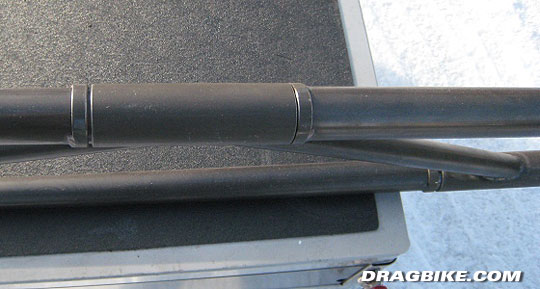 Another area that traditionally has been of secondary concern is the wheelie bar design. However, it should not be considered as an ancillary bolt on part but rather a removable part of the chassis. It suffers some extreme loadings and an incorrectly designed and set up set of bars can cause severe problems when negotiating the quarter mile. With that in mind the bars are 98 inches long, constructed in the very same type and size of tube as the main chassis and, rather than of the typical fixed type used on most dragbikes, utilise `slip joints’ more commonly seen on the bars used on drag cars. These slip joints help settle the chassis on launch, allowing a better `plant’ of the tyre and a more stable situation on the early part of the run. 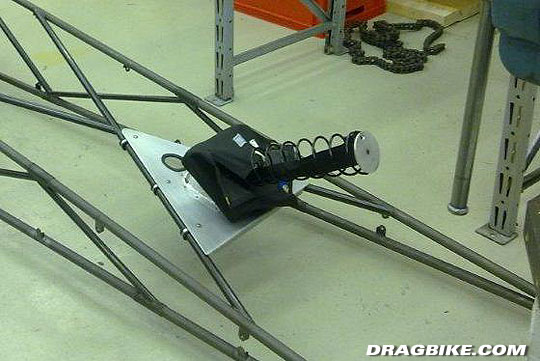 The wheelie bars are also home to another controversial talking point, the parachute housing and launch mechanism. Although used by drag cars for many years now, parachutes on drag bikes have been almost unheard of due to the fact that most US tracks have had shutdown area lengths that were long enough for good quality brakes to be adequate to bring the rapid Top Fuel machines to a halt. However, the facilities in Europe and Australia do not generally benefit from braking areas as long as in the US and, as the bikes have performed faster and track preparation improved, then braking fast enough has become a problem. Unavailability of canopy sizes and concerns with instability after deployment was a concern, but after being pioneered in Australia by ex pat British Top Fuel Bike rider Jay Upton, his collaboration with Sam Wills and Stroud Safety resulted in a suitable unit. Puma modified and adapted the standard unit to their specification and the Gulf Oil Dragracing team are the first in Europe to use such a device.

The next article will cover ancillary drives, drive train and control.