It was a straight-up bracket hustler’s convention. The most dangerous motorcycle bracket racers in the nation converged on Lucas Oil Raceway in Brownsburg, Indiana, for the $62,000 BB Racing Bracket Shootout—the biggest-ever payout in motorcycle drag racing history. It was all part of NHDRO’s Big Show, which included the rain-delayed June race.

Two ladders—one with delay boxes and one without—with 64 bikes each ran off to put a finalist from each ladder in one big final round. Round after round, blow-by-blow, with margins of victory decided by tens of thousandths until each bracket boiled down to finals.

Box eliminations saw Tennesse’s Ronnie Woodall Jr. coolly slicing his way through the field to meet Florida legend Roy Hagadorn in the final. In a perfect example of what defined winning and losing in this intense event, Woodall’s .015 light was just far enough behind Hagadorn’s .011 to push him out too far with a 9.311 on his 9.32 dial in the double breakout race. Hagadorn ran an 8.844 on his 8.85 dial-in.

Watch Every Round of the 62K BB Racing Bracket Shootout

So there it was, the defining battle of sportsman motorcycle drag racing—Palm on her true, stock hand-clutch Suzuki Hayabusa streetbike vs. box skills master Hagadorn on a Suzuki GS wheelie bar bike. 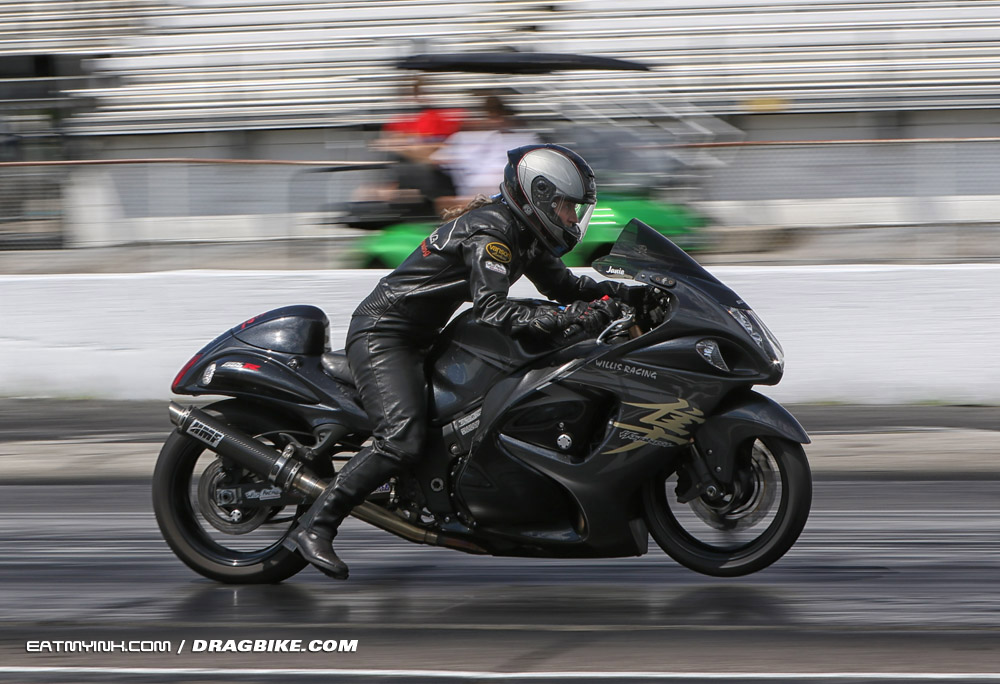 Last year’s Big Money bracket winner (a quaint $12,000 by comparison, and $1000 less than what Palm got to runner-up this year) Tom Klemme rode an ancient KZ Kawasaki from the late 1970s. This year, Hagadorn won $50,000 on a bike he bought brand new in 1981, proving that it ain’t gotta be new or fancy to be lethal and profitable. As someone once said, “It’s not about the bike.” 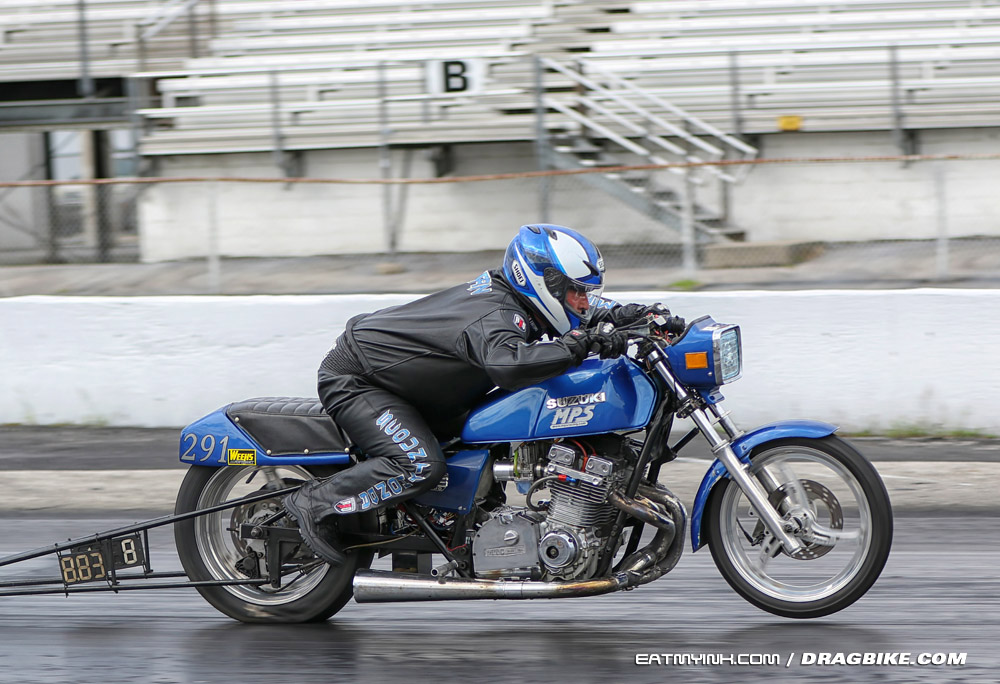 “To my knowledge and research, Roy is the winningest drag racer ever, or at least in the top four,” said drag racing historian Bret Kepner, who inducted Hagadorn into the East Coast Drag Racing Hall of Fame in 2015. “NHRA? Can’t find anybody close. He has won the Division II bike title at least ten times.”

“This, by far, is the biggest race I’ve ever won,” said Hagadorn, casting huge praise on NHDRO’s Big Show and its 128 competitors—the absolute best motorcycle bracket racers on the planet, with the exception of NHDRO’s many Canadian racers who couldn’t cross the border due to COVID19 restrictions. 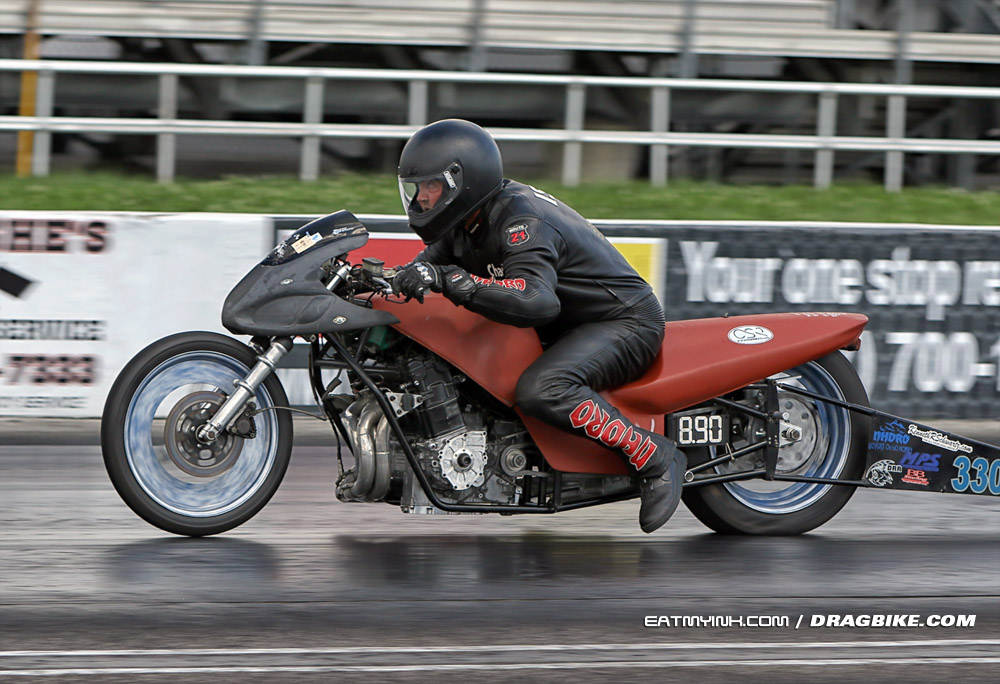 In fact, Hoke was going rounds on both of his bikes in many classes this weekend—the GSXR streetbike that he bracket and index races, and his Pro Ultra 4.60 bike. 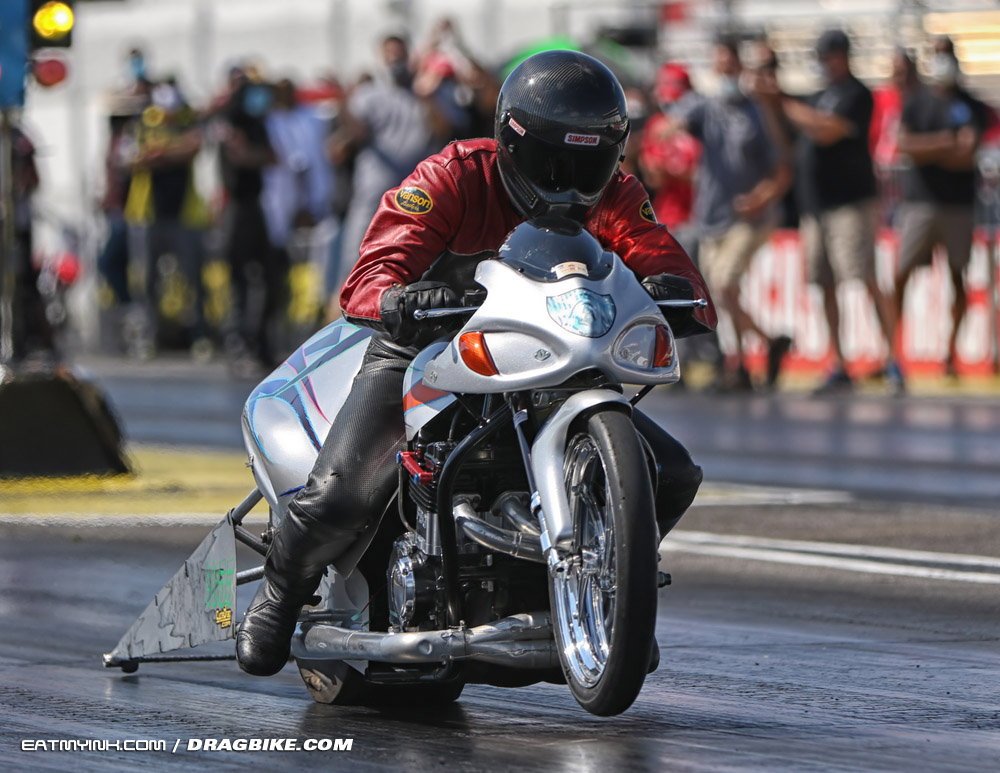 Hoke won the I-65 vs XDA 4.60 Shootout, presented with the I-65 series, which was dominated by the I-65 racers. Terry beat Maegan “Bikerchicc” Petway in the Shootout final. Both bikes were built by Louisville’s Deshawn Wheeler.

Chase Van Sant won the last NHDRO points-paying Pro Ultra 4.60 race in 2019 on his Trick-Tools Suzuki, and even though it took until August, he also won the first race of 2020. Van Sant’s final round .008 light vs. number one qualifier “Chicken Head” Chad Otts’ .043 pretty much sealed the deal in the world’s quickest two-wheel index class, as Otts broke out trying to make up the difference.

“It was a tough but really good weekend for us,” said Van Sant. “The weather made things really challenging, with running only one qualifier and first round on Friday, and then having a full day off on Saturday, and then jumping into eliminations on Sunday. It made things tough, but everyone was dealing with the same circumstance, so it added a little extra challenge. 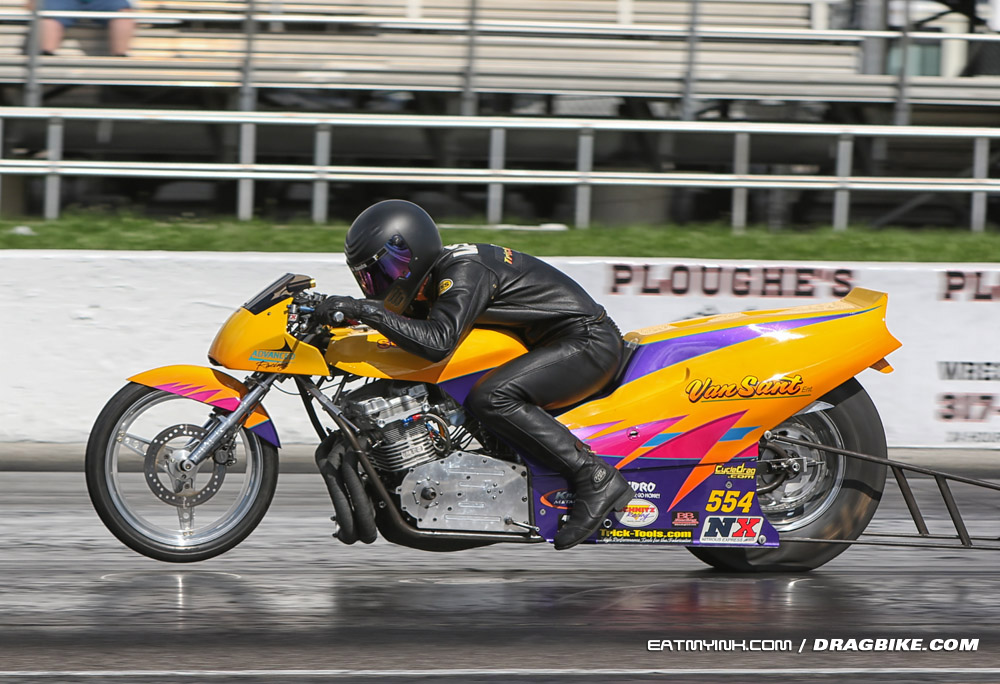 “The turnout was great and we got to see a lot of bikes that we have never seen before or raced against, so that made the win that much more rewarding. The class is really competitive and there are so many good racers, that a win in this class really does feel like a good accomplishment.”

Provisional number one qualifier from June, Dan McCarten, threw a rod on Friday and was finished for the weekend. 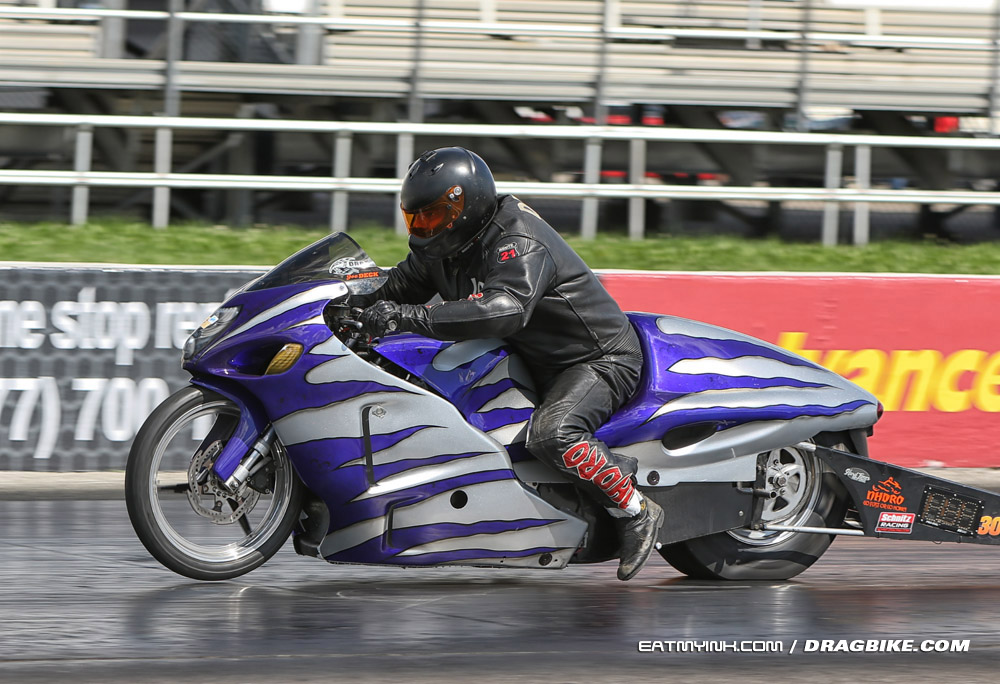 Deck ceded .007 to fellow finalist Donnie Emerson at the tree, but ran closer to the number for the win. Number one qualifier Jeremy Teasley fell to John “Spooky” Markham in the quarterfinals.

Teasley may not have completed the deal in Top Gas, but he took both ends against Marcus Taylor in the in M2.Shocks 8.70 Quick Street final for that win. Teasley vanquished number one qualifier Dustin “Biscuits” Lee in the semis. 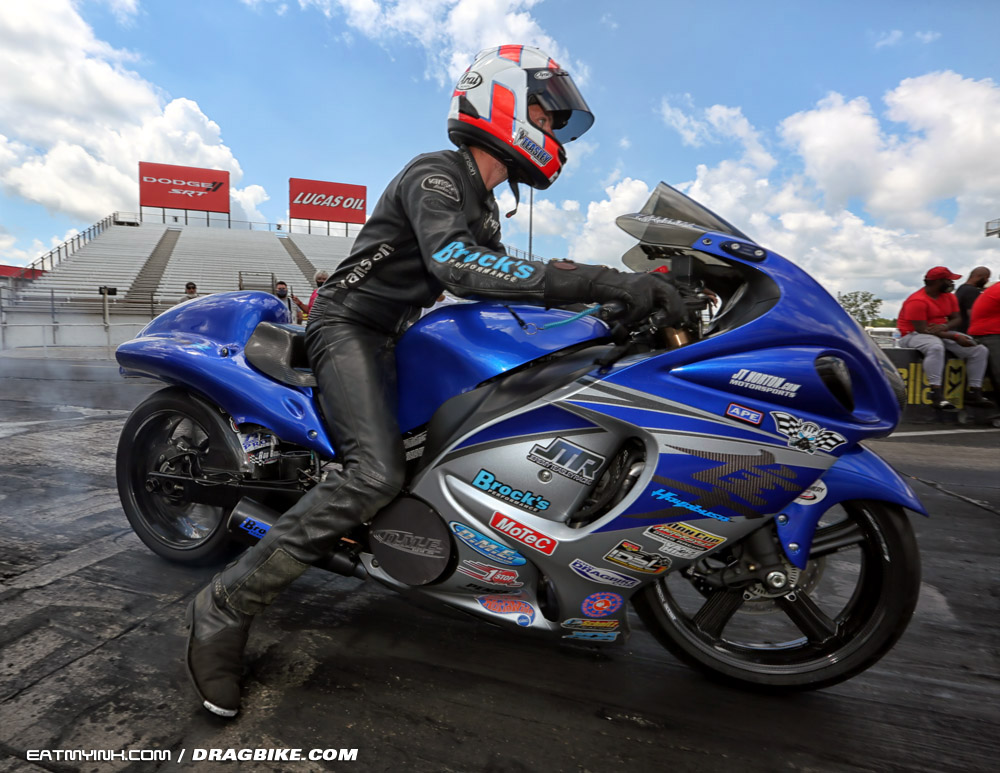 HTP Super Stock is a variation of a class that Teasley used to dominate—the old Prostar Supersport. But on Friday, Teasley was lamenting a lack of testing time and laughed that, when faced with competing against 103 pound XDA winner David Fondon, “Now I know how everyone used to feel about racing me.”

But weight wasn’t a factor this particular weekend. Teasley qualified fourth but fell to number five Richard Gadson in E1. Both had identical .092 lights, but Richard ran low ET of the weekend 8.84 to Jeremy’s 8.95 for the win. Both were on Suzuki GSXR1000s.

Gadson then faced number one qualifier Dustin “Naked Boy” Clark (8.852 at 159.61) and his Kawasaki ZX14. Clark struggled to keep the front wheel down and Gadson advanced to the final to face Ryan Schnitz. 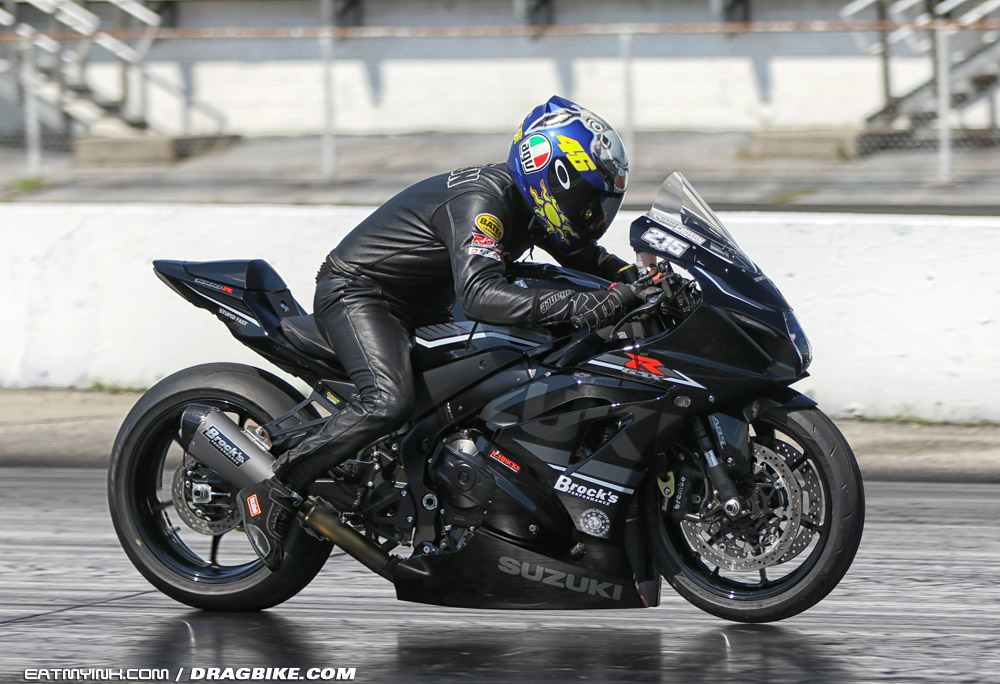 Schnitz’s Ducati Panigale V4R is the wild card in the Super Stock field. The Italian’s dry clutch is a riddle for even smooth Schnitz, but he kept it consistent and made it to the final where he met his match in Gadson’s GSXR. Richard’s 8.86 allowed him the comfort of a .065 disadvantage at the tree and still win against Schnitz’s 9.03.

“What a fun weekend!” said Gadson. “Rain or sunshine, NHDRO events are a bunch of fun, especially in Indy. That’s probably one of my favorite things about Brian and Niki’s events—they create a fun atmosphere for everyone, even the children. Kudos to NHDRO!”

After running a 6.63 at over 219 miles per hour on his turbocharged Suzuki Hayabusa in round 1 of eliminations, Gabe Frederick looked poised to waltz to a Pro Street win. But a -.003 redlight in E2 ended Frederick’s day and continued his Indy frustration—he’s never one at the fabled track.

The beneficiary of Gabe’s redlight was Brad Christian on Quicktime Racing’s “Pops” bike. Brad’s whole day was kind of like that, starting with a bye in E1, the Frederick redlight in 2, teammate Brett Ware’s bike pulling through the beams in the semi, and a broken Mike Bayes in the final. 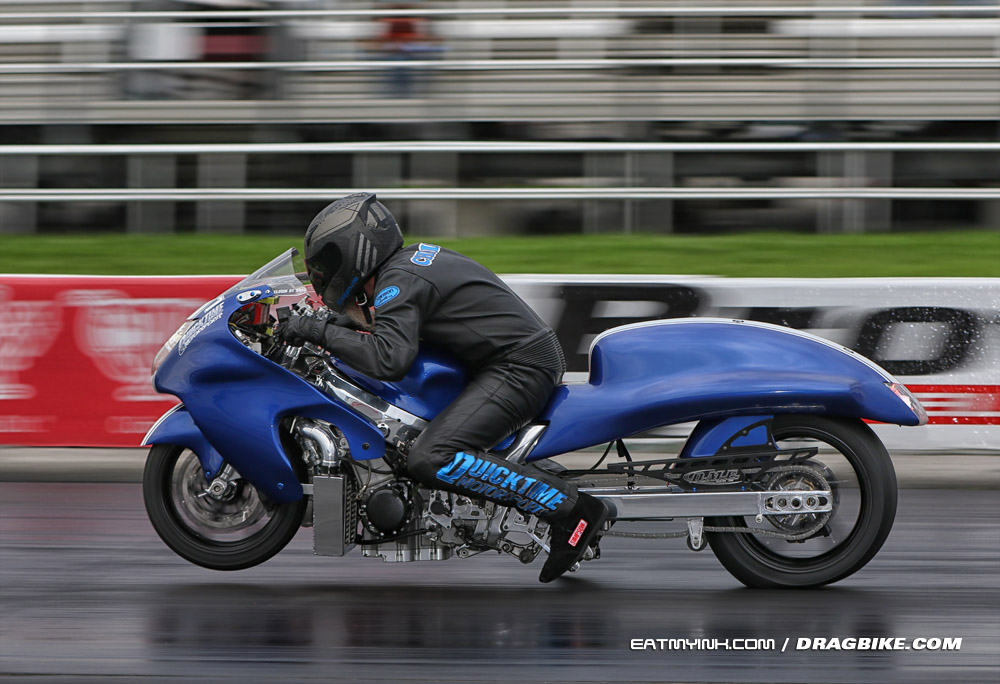 Christian then went to the final against Quicktime boss Rudy Sanzottera in the Pro Street Shootout final, and again, the other lane’s misfortune was Christian’s reward as Sanzottera chewed a transmission.

“We got down the track every pass, most of them were not pretty, but got the job done,” said Christian. “Definitely wasn’t the way I wanted to win in either of the races, but a win is a win. (With) a little tuning and chassis adjustments, Pops’ bike will be hauling ass at the next race.” 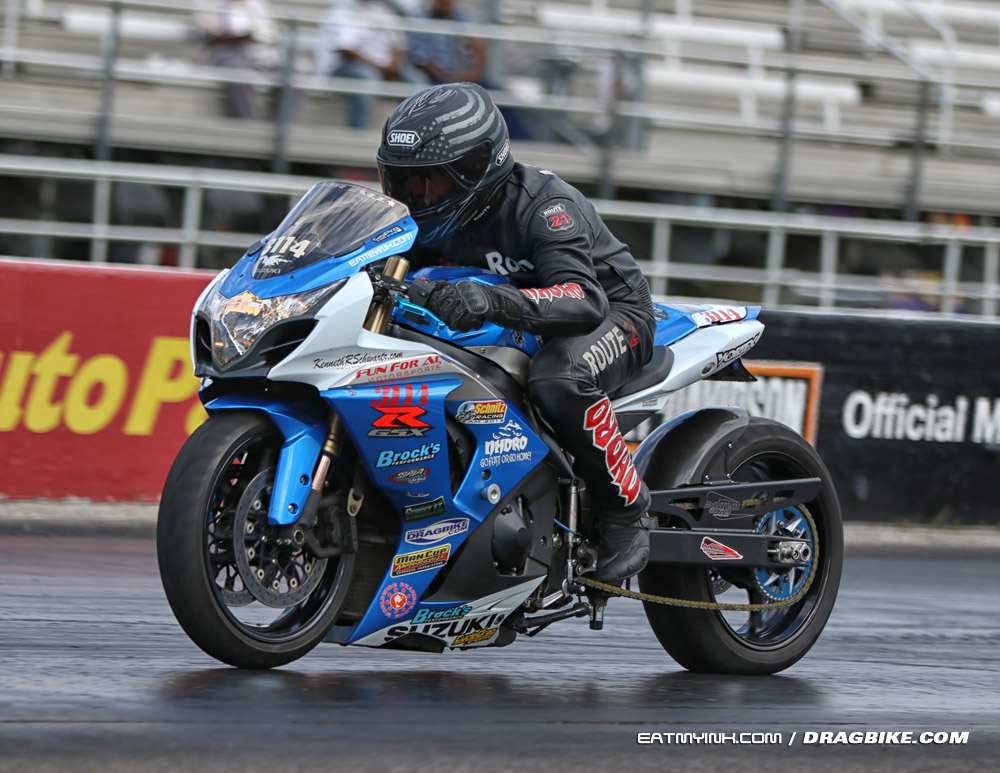 Jason Keller’s daughter thought sure her dad was gonna win the $50K race, but they both were thrilled with his MPS Pro ET win. Dustin Lee redlit by -.004 in the final while Keller nailed his own .007 Bond Bulb with a 7.77 dial-in aboard his former Karen Stoffer Pro Stock chassis. Let’s hope Keller hit the craps tables on his way back to Toledo. 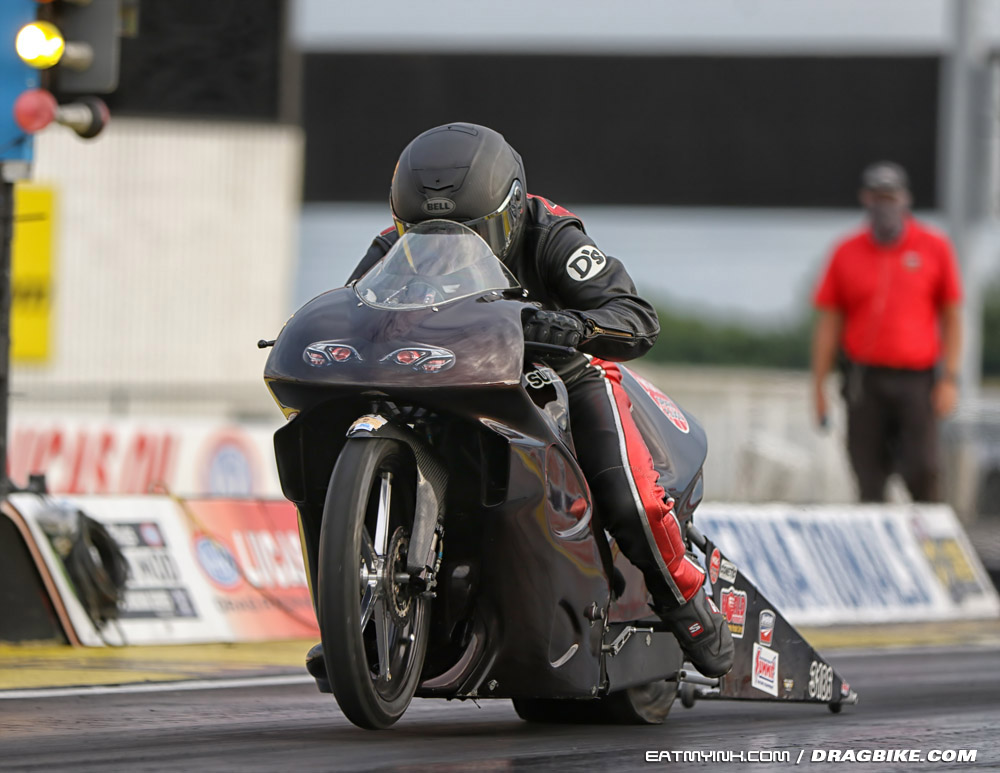 Three years ago, Wes Brown’s ‘Busa burned here at Indy. Now it’s been rebuilt, named “Crispy,” and took the Kevin Dennis Insurance Street ET win. A Bond Bulb wasn’t good enough for runner-up Mark Parmenter, who was a tenth off of his 9.68 dial after putting a .007 up against Brown’s .023. 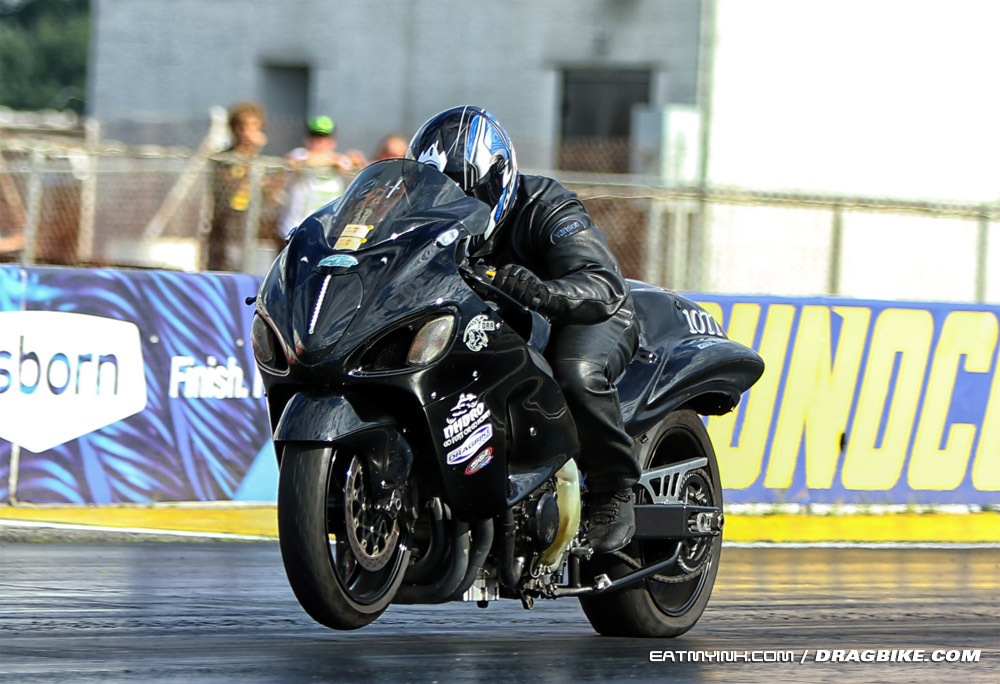 Kaleigh Welch (no relation to NHDRO’s Welch family) won NHDRO’s first ever Hard Times Parts and Service Jr. Dragster race when final round opponent Noah Taylor redlit by -.011. Welch ran her rail out the back door, posting an 8.101 at 80.21 on her 8.14 dial. 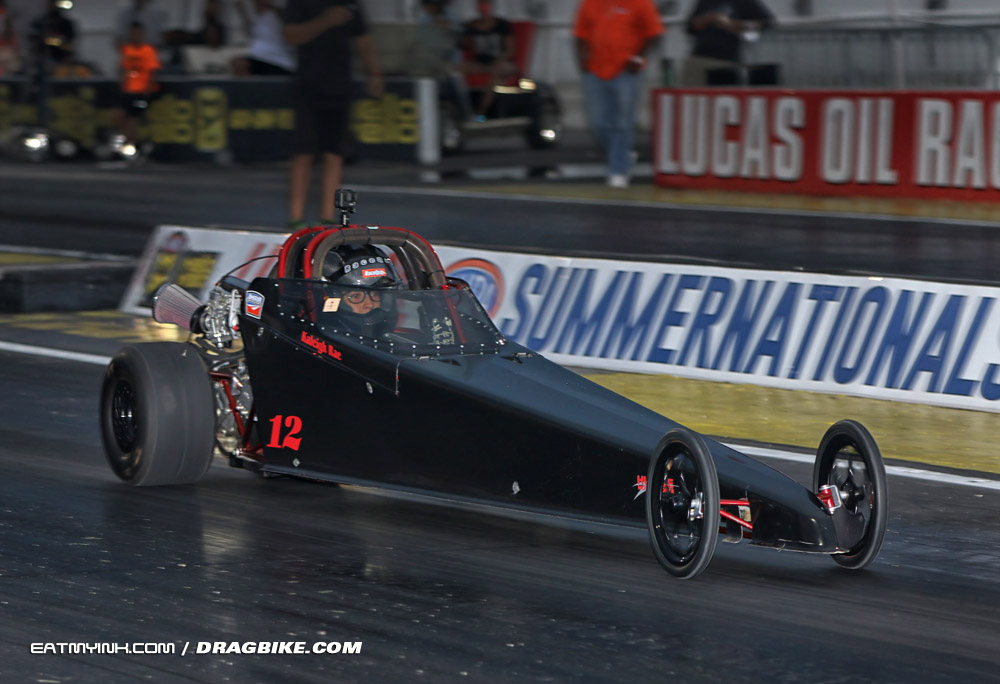 The weekend’s VooDoo Grudge highlight might have been watching Teasley post a 7.554 at 187.31 mph on Devin “Doe” Ragland’s Real Street GSXR1000, even though it fell far short of the 7.40 something pass that the team was hoping for.

NHDRO’s Brian and Niki Welch look forward to welcoming the NHDRO family back to Indy for the World Finals on October 2-4. And while there is not another Big Money Shootout planned, Brian is cooking up some NHDRO magic for the event, so expect something special to be announced soon.

Even though 2020 turned out to be only a two-race season (rain this past weekend and a huge turnout scuttled plans to run two races) for the Midwest’s biggest drag racing series, NHDRO will crown champions in October. 2019 Gold Cards will still be good in 2021, along with the new 2020 champs.