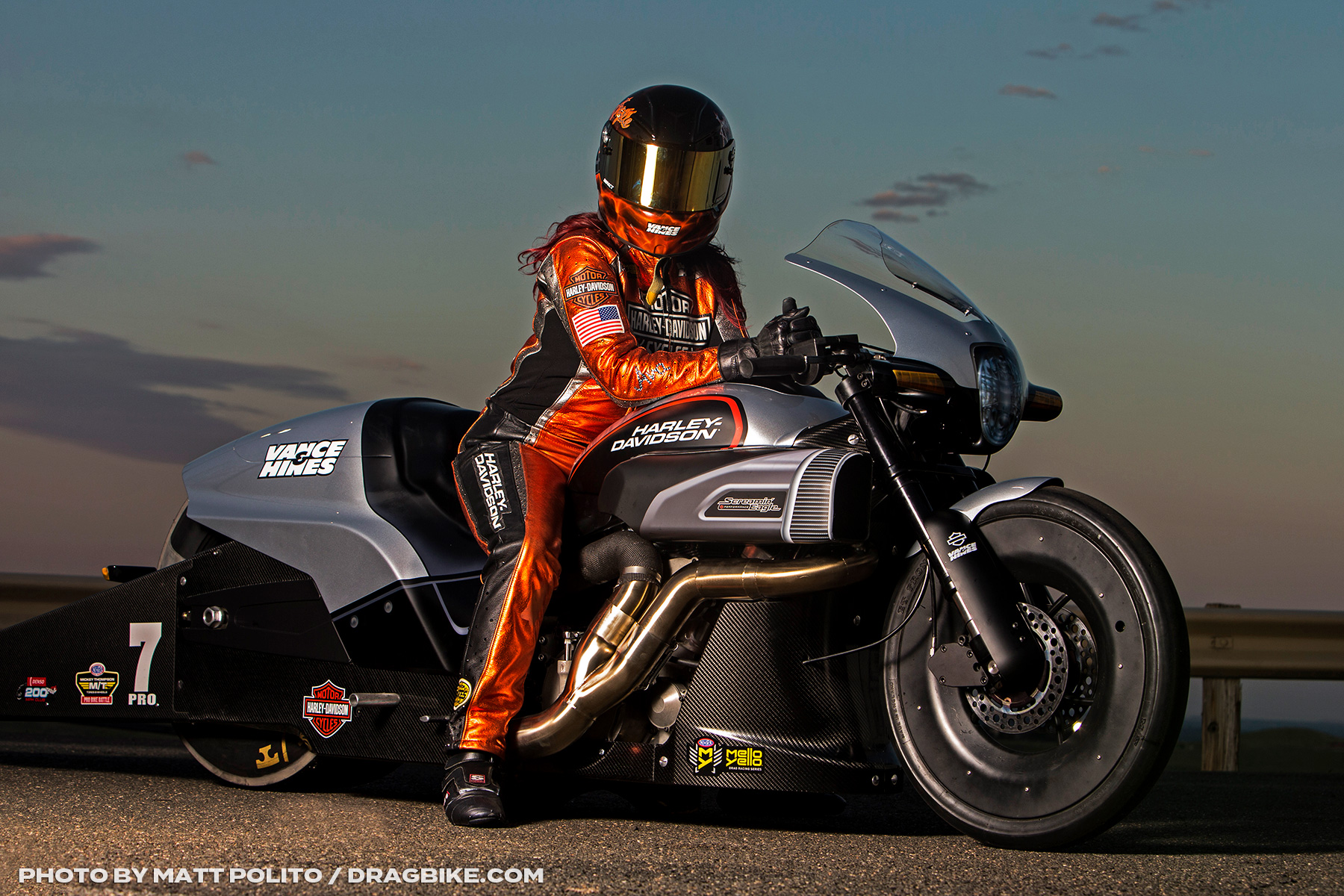 The Next Step in Pro Stock Motorcycle Drag Racing

After more than a year of planning the Harley-Davidson Vance & Hines FXDR Pro Stock Motorcycle hit the track at the Mile High Nationals just outside of Denver for all three team riders; Andrew Hines, Eddie Krawiec, and Angelle Sampey. 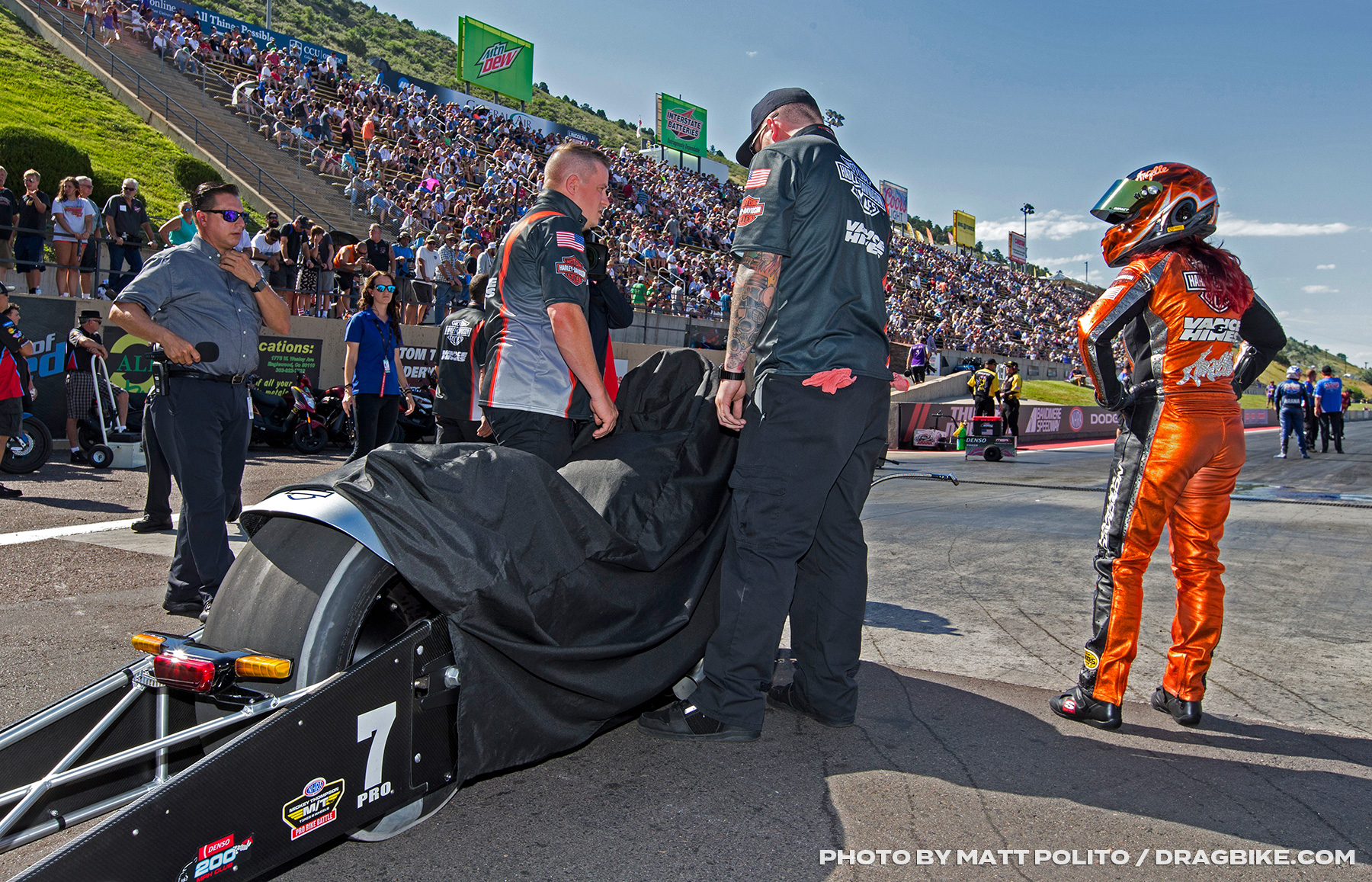 The project was a joint effort between the Harley-Davidson Product Development Center, the Vance & Hines Race Shop and, of course, the NHRA tech department. 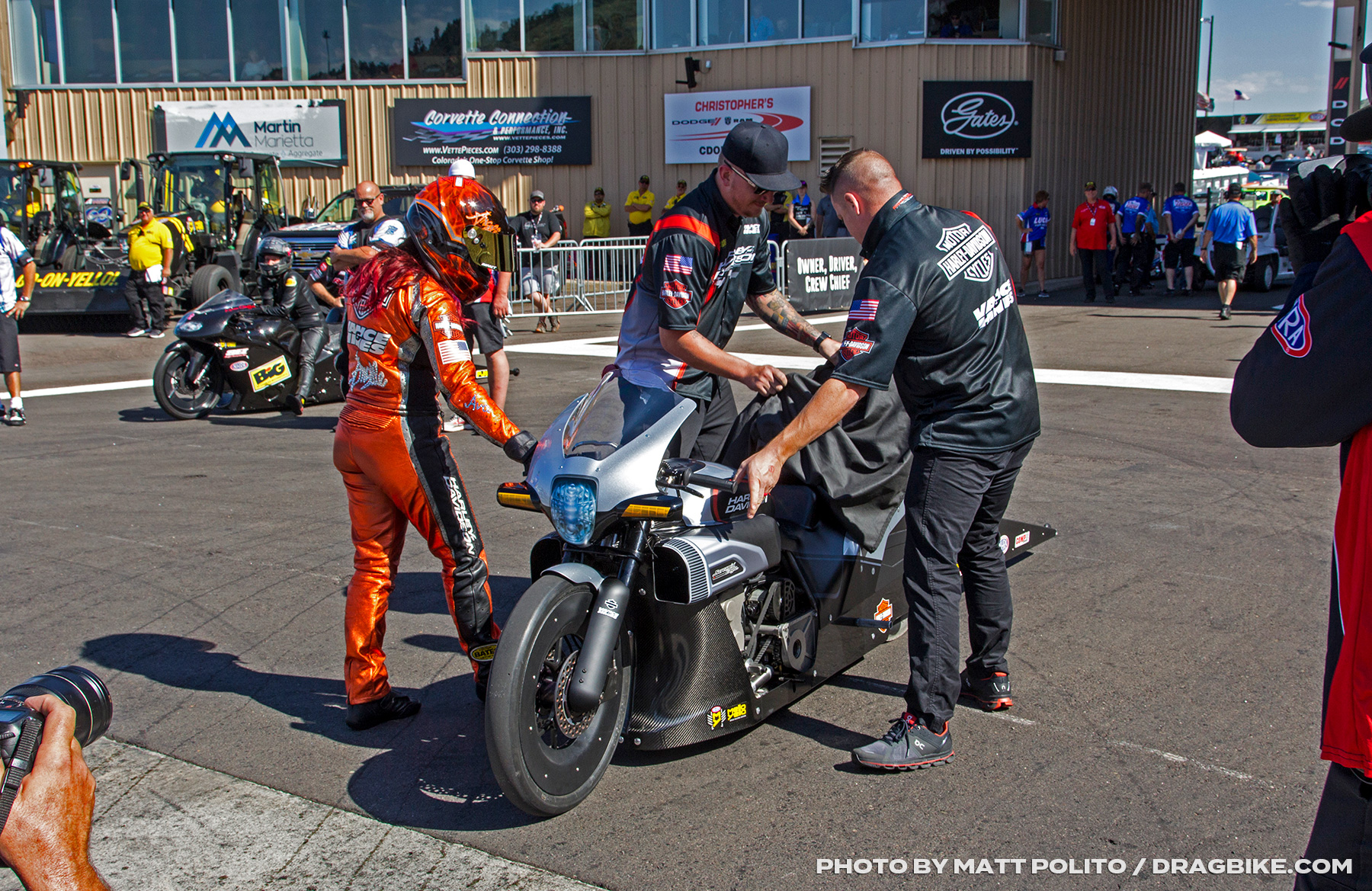 Discussions for the new body began in April of 2018 with Harley-Davidson wanting to move on from the Street Rod – a hopped-up version of their entry-level “Street” line – to their power cruiser FXDR which began production in 2018. 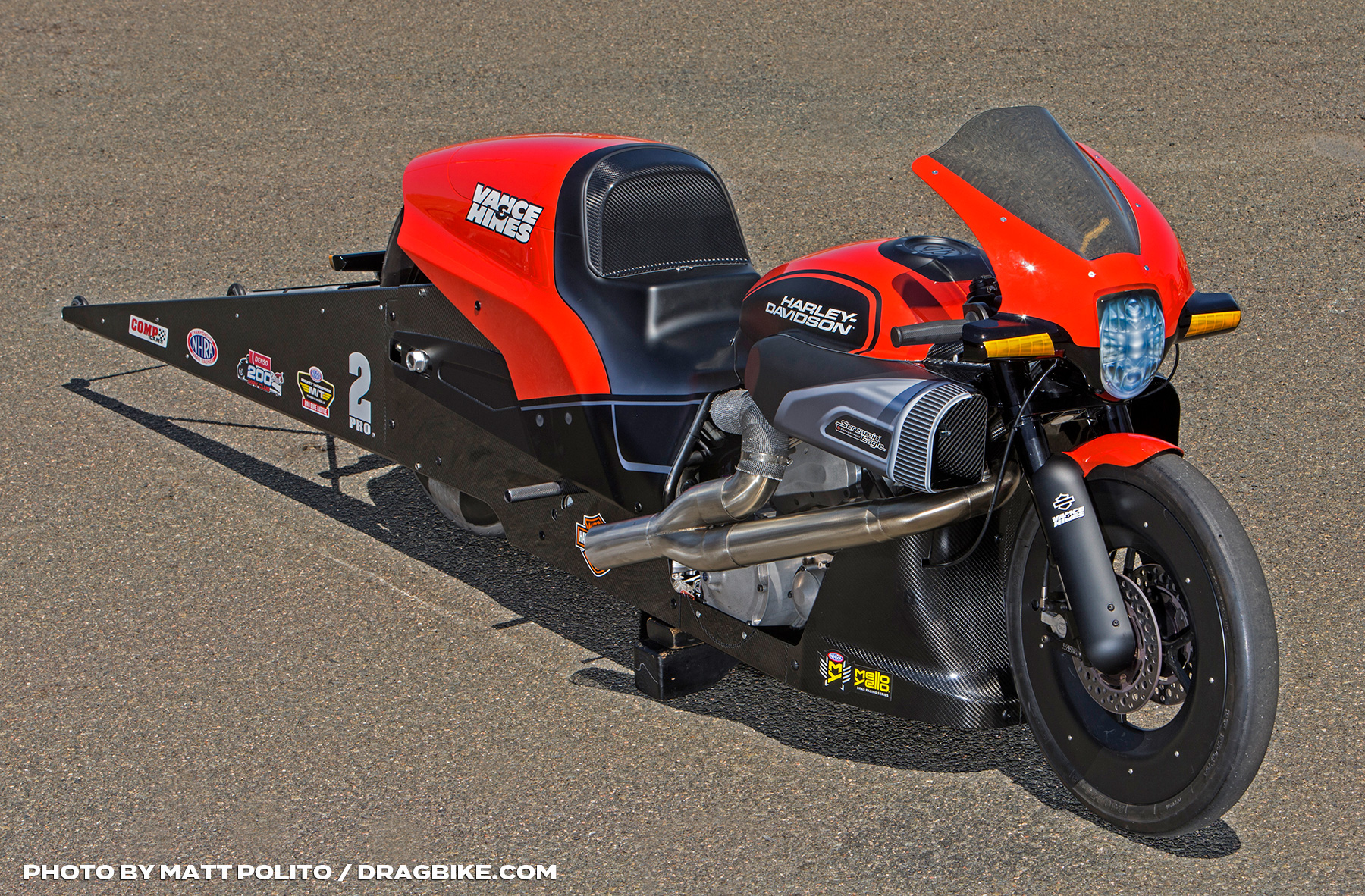 “We wanted to align what we race at the track with what we sell,” said Harley-Davidson Marketing Director Matt King. “The FXDR is performance inspired and in fact, drag race inspired. It goes fast in the straight line but also handles really well. It has the look and sound and feel that you get from a traditional big V-Twin Harley-Davidson and it’s a performance product that aligns with this [drag racing] program. And quite frankly the Street Rod is not nearly as cool as the FXDR.” 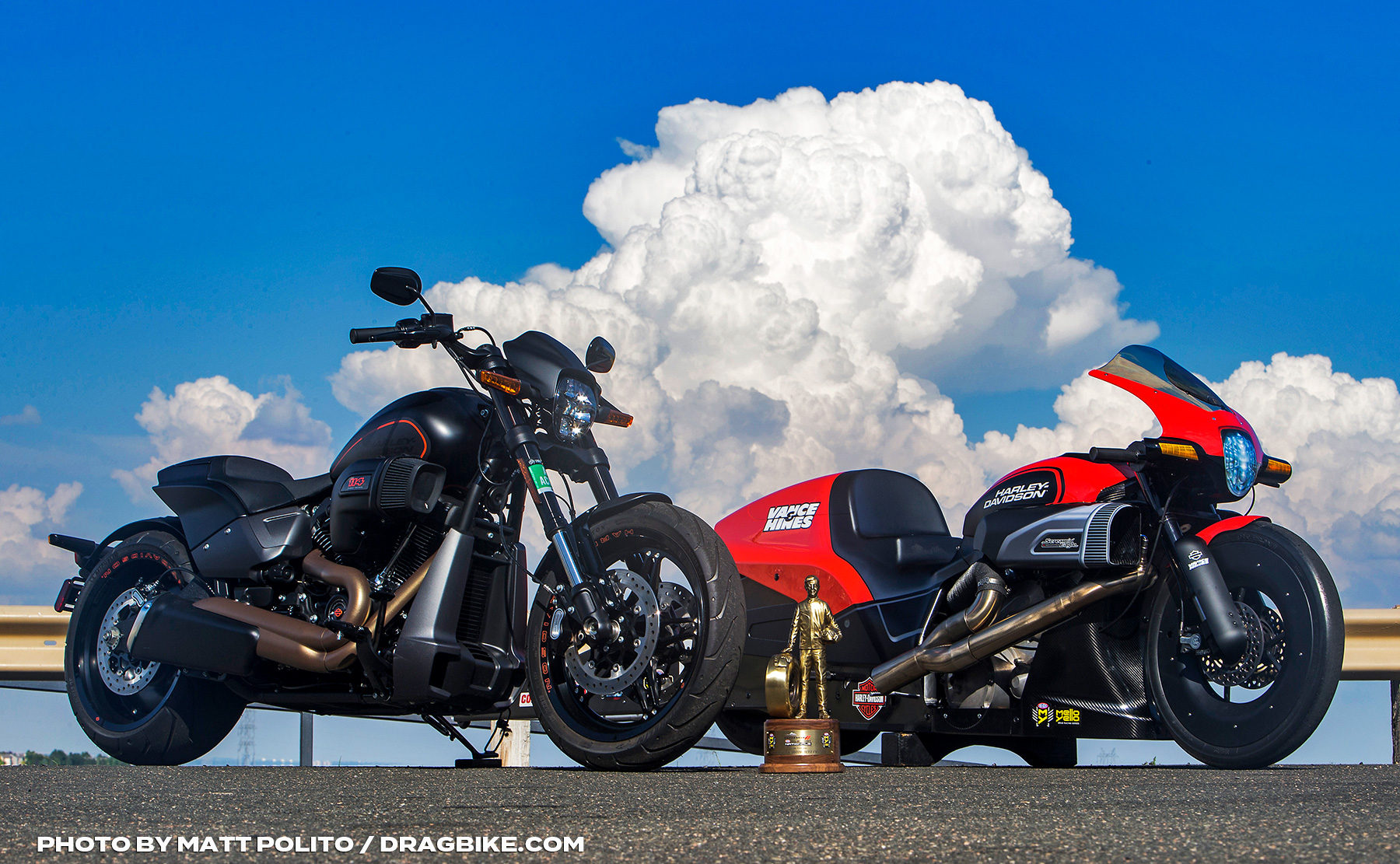 King noted that the FXDR took design cues off of the team’s drag race bikes and in particular the intake scoops and fat rear tire.

Initial renderings of the new Pro Stock came out of the H-D Product Development Center in August of last year. At the end of the month in Indy, the NHRA took its first measurements of the stock FXDR.

One major change the NHRA required from the original renderings was an extension of the rear fender. On the stock FXDR the rear fender ends before the rear axle but NHRA rules require the fender cover the rear tire. 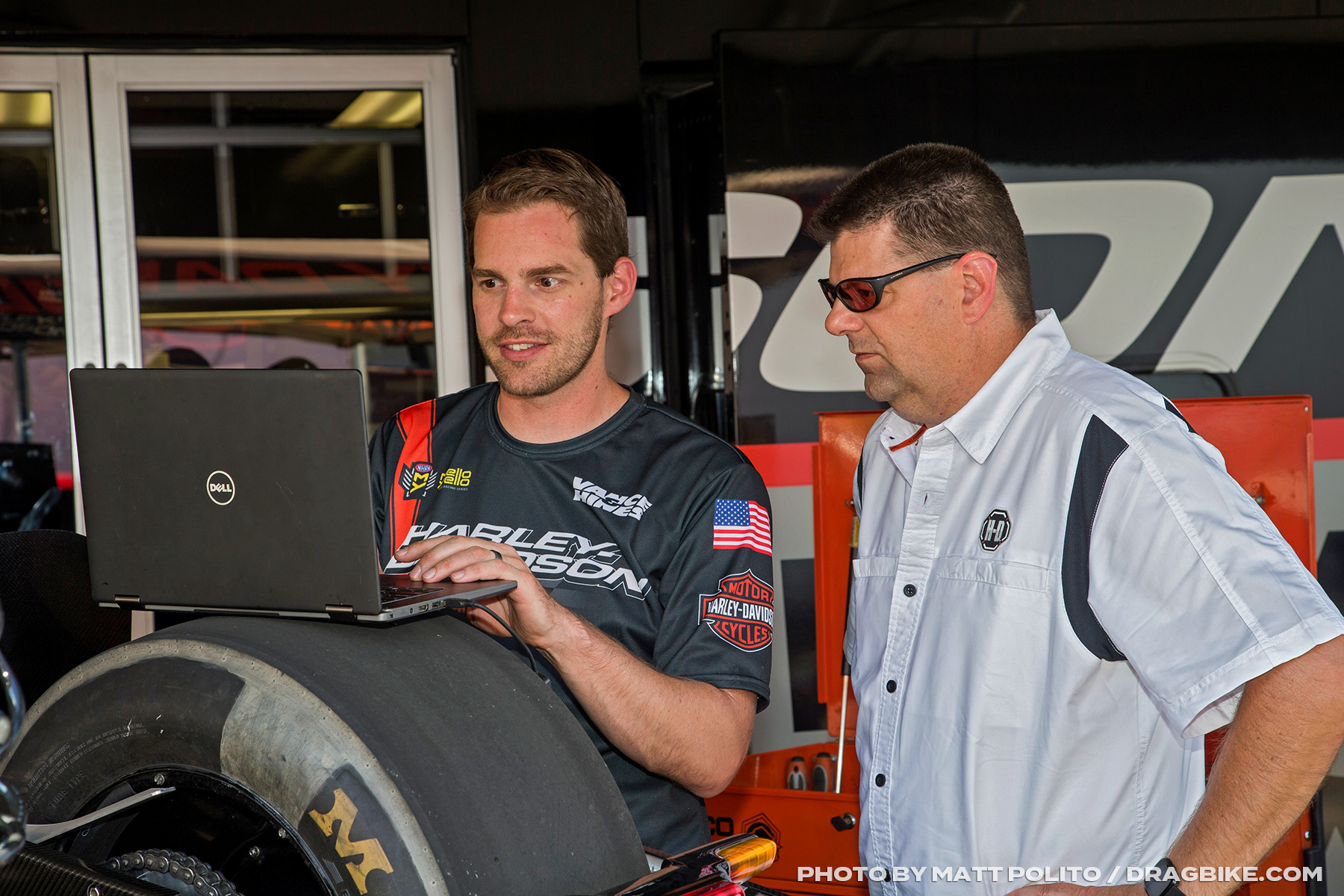 Once the renderings were accepted by the NHRA, Vance & Hines began the process of final design and fabrication of the body. This was all done on the computer.

“This entire project was done in CAD,” said Hines.

A digital model of the body was built, designed to fit the existing Street Rod chassis that the team debuted in Charlotte of 2018 and currently held the elapsed time record for the class at 6.720 set by Hines in Gainesville of this season.

“We knew we were going to change the chassis,” said Hines, “it was working well. We were not concerned with the geometry.” 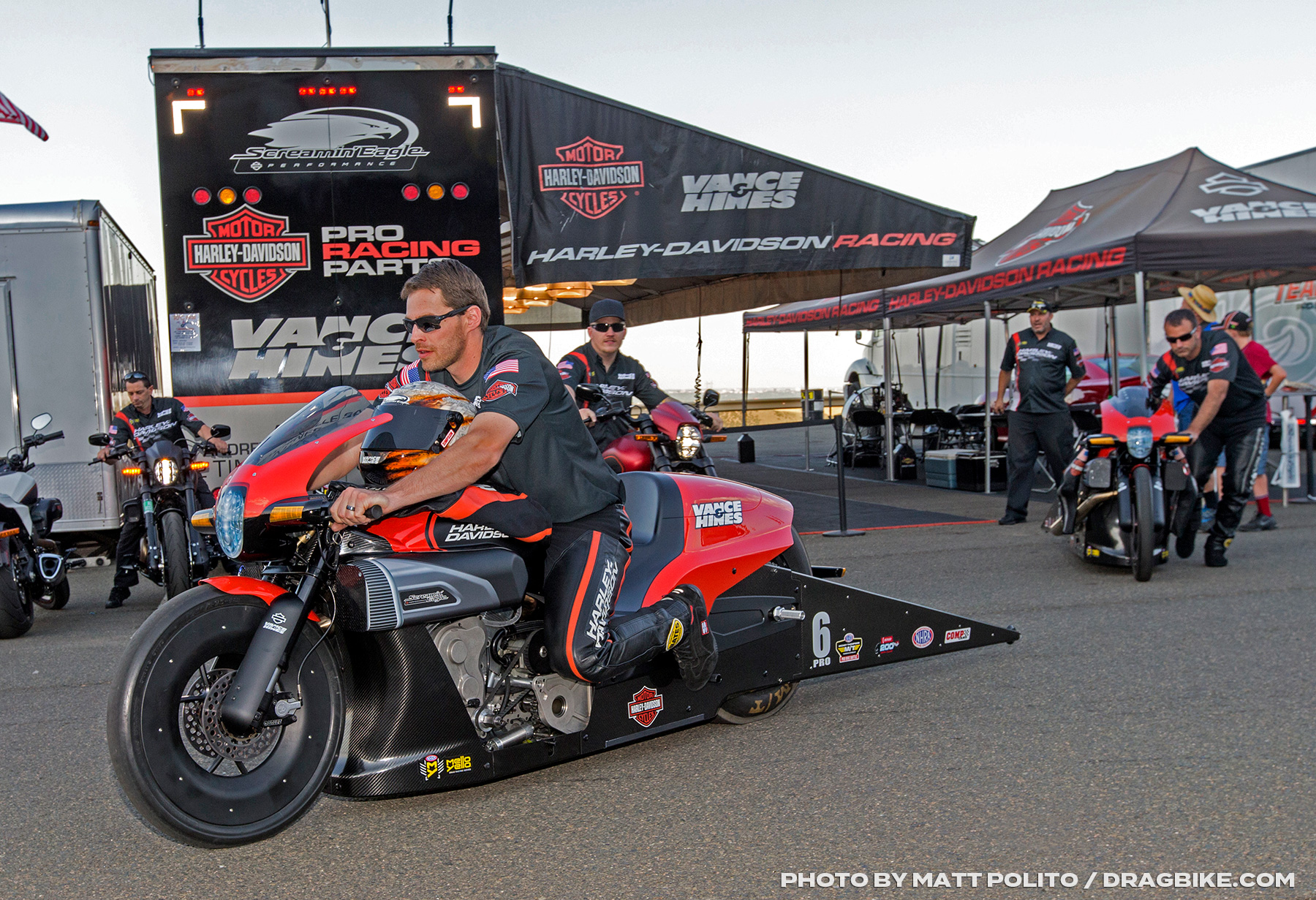 Hines and Krawiec were then scanned in riding position on their Street Rods and their digital likenesses were placed on the digital FXDR.

The new FXDR bike and rider in digital form were then analyzed using Computational Fluid Dynamics (CFD) software – basically a digital wind tunnel. This allowed the team to make small changes to the design and then quickly test the changes at a simulated speed. 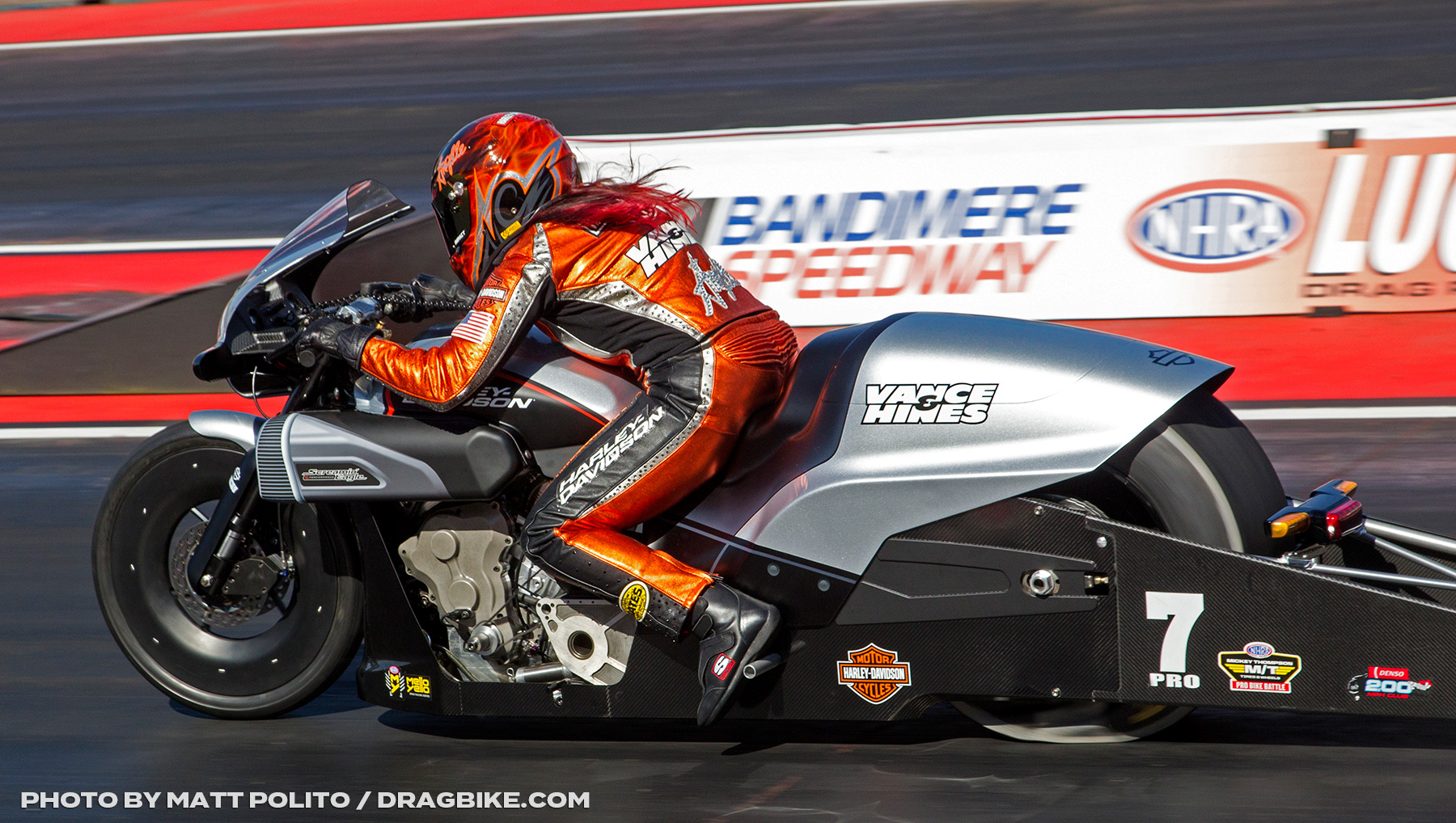 “We made aerodynamic strides from the V-Rod to the Street Rod and we didn’t want to go backward,” said Hines. “The Street Rod was aero-stable meaning it didn’t pitch or try to lift at speed and that is what we were striving for with the FXDR.” 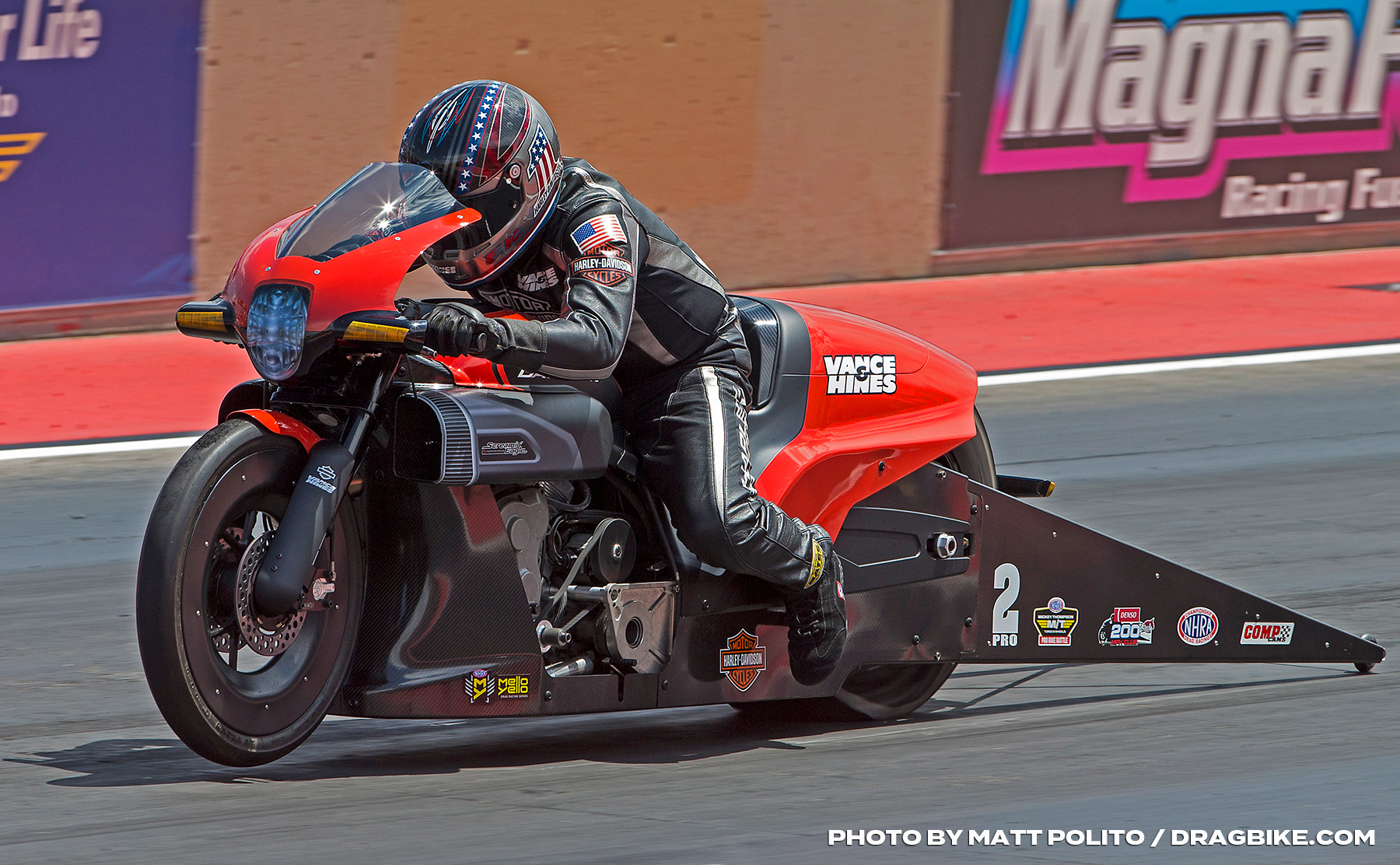 After the digital design was finalized, full sized molds were made of the 30 separate parts using CNC machines and epoxy tooling board. (For the more complicated parts a “pattern” or replica of the part was made with the CNC and a mold was taken from it.)

Most of the molds and patterns were made at V&H in Indy but for time concerns the tank and rear fender were patterned and fabricated at Gemini Technologies in East Troy, Wisconsin. The rest of the parts were fabricated in Leading Edge Composites in Brownsburg, just across from the Vance & Hines race shop. The parts were made with “prepreg” carbon fiber and autoclaved. 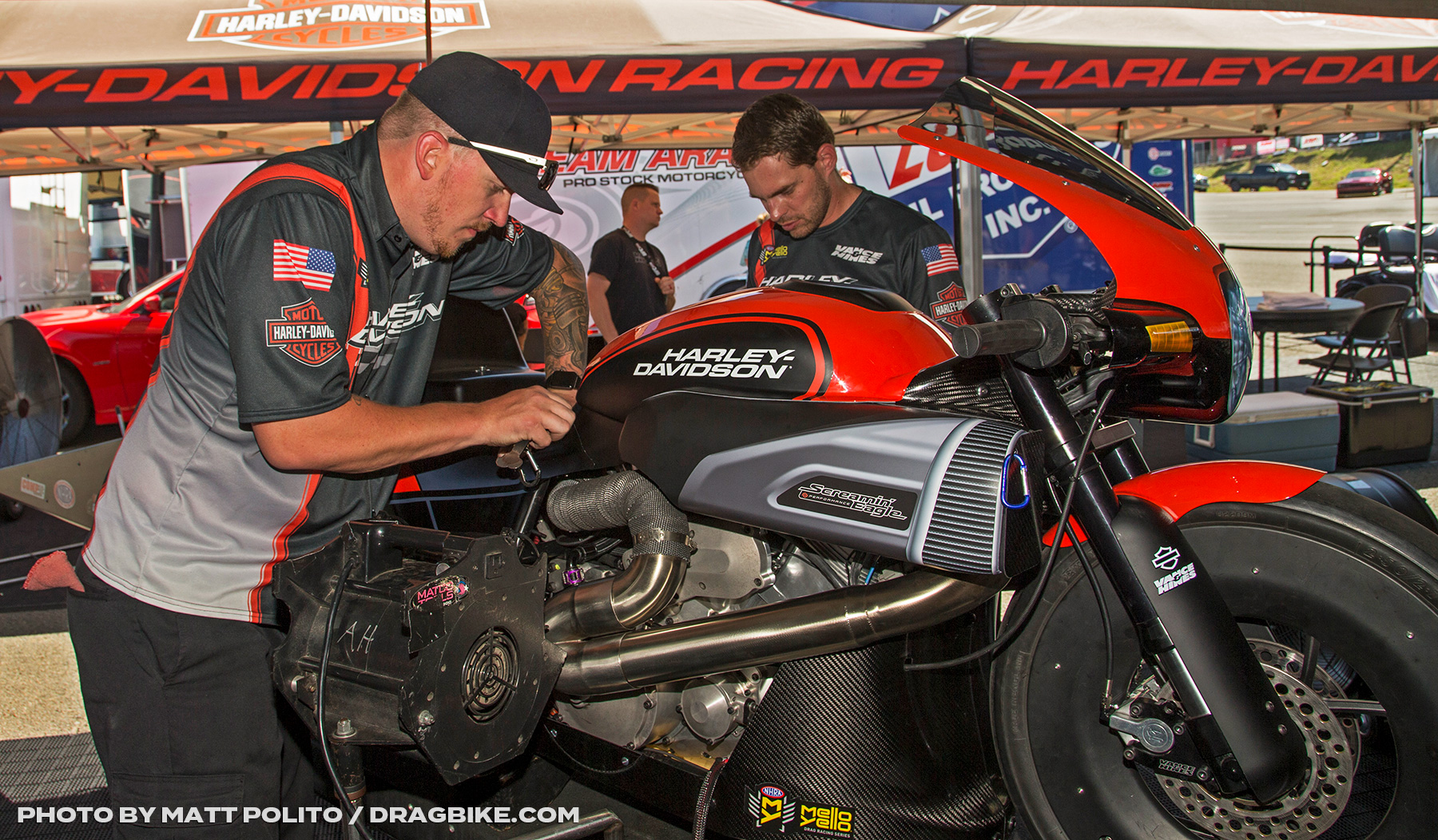 All parts were mounted to the Street Rod chassis by bike fabricator and race crew member Mike Mullaney. 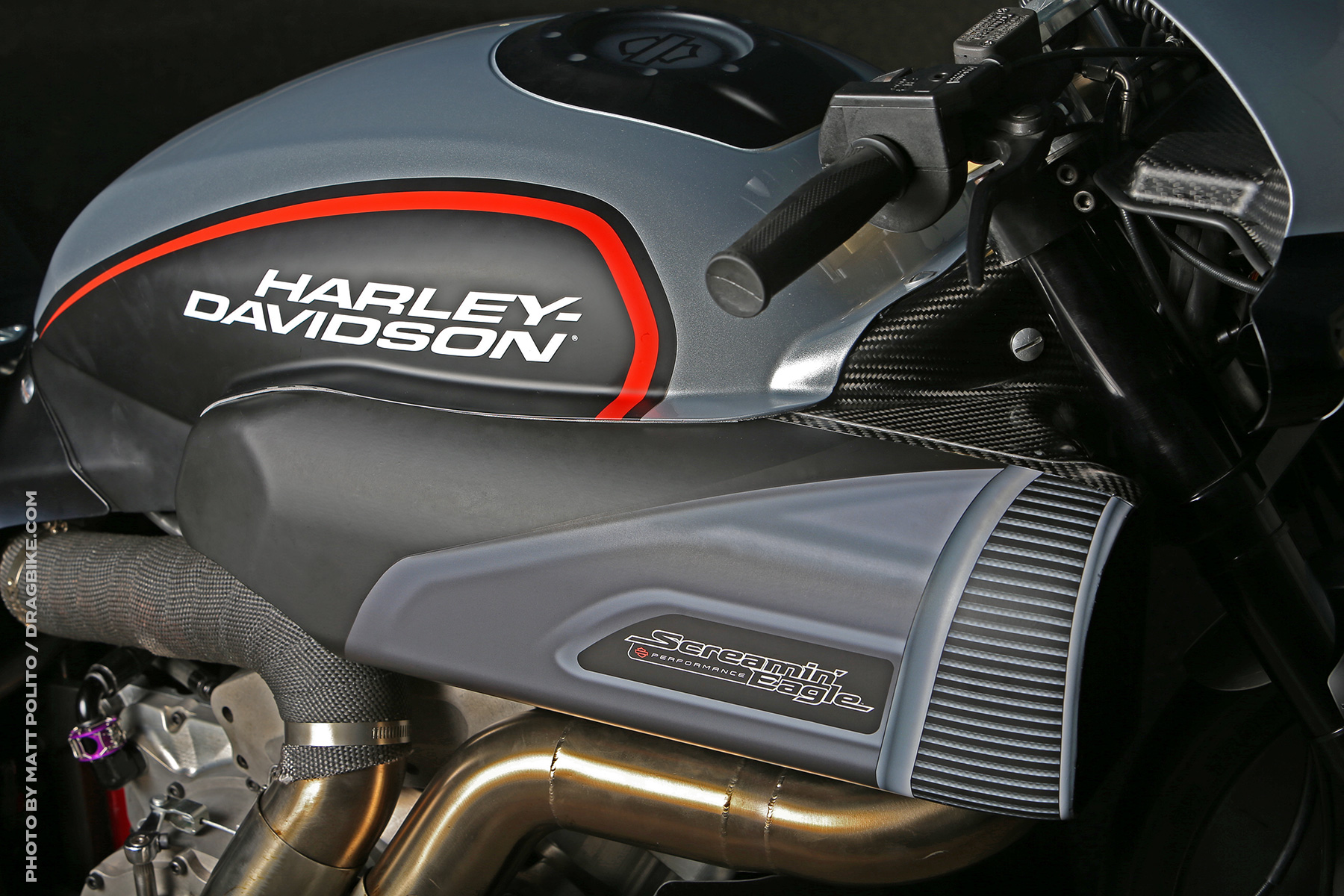 The gas tank shell on the race bike is an exact copy of the stock bike (“We have Harley’s CAD files,” noted Hines) but it is shortened to make room for the seat. 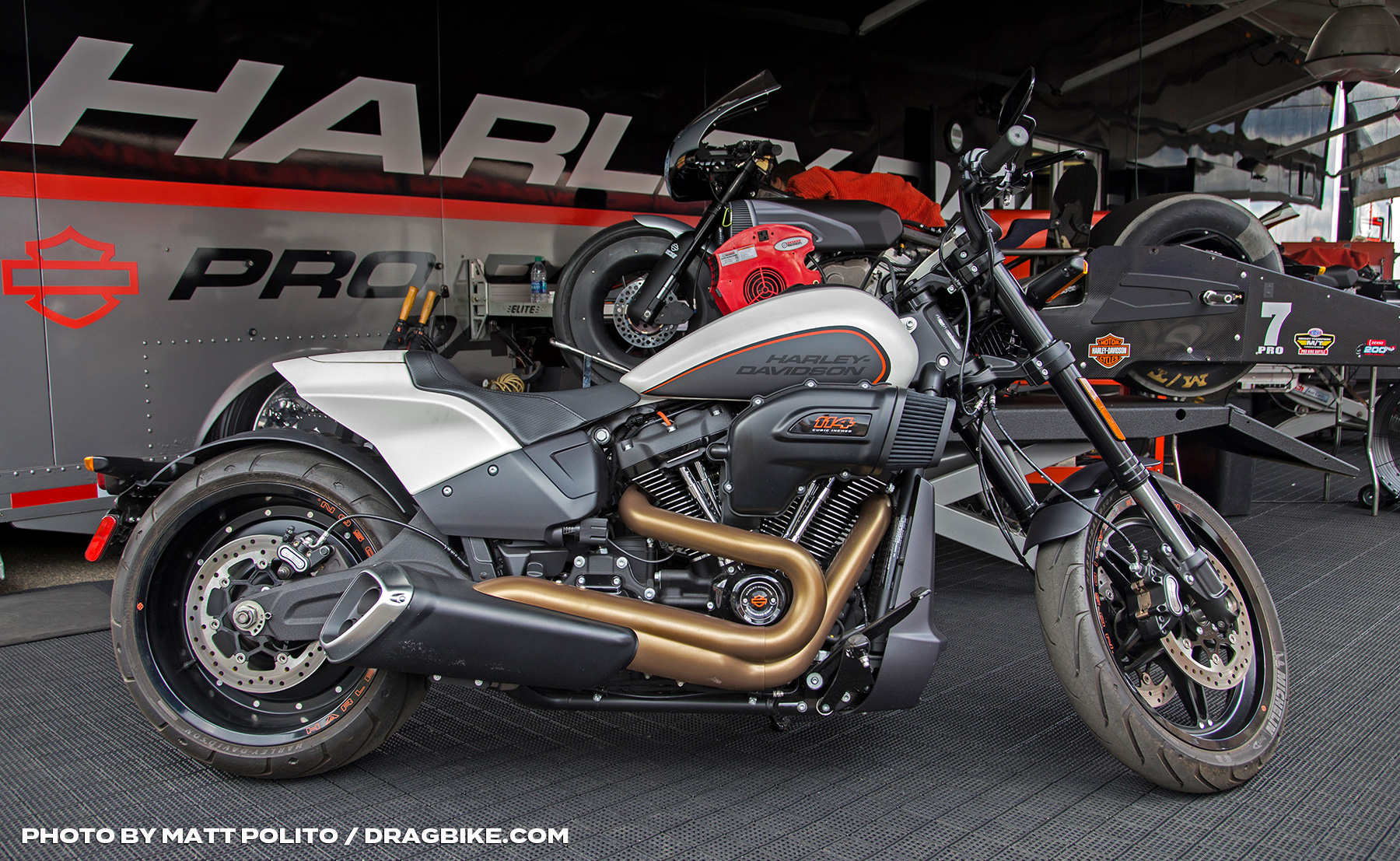 The top of the body, which includes the tank and tail, is now two pieces. The tank portion has a lip that is fitted with foam to seal the air box. “We saw that the EBRs had made the body two pieces and we liked the idea,” said Hines, adding that if the team is required to get fuel in the staging lanes in front of other competitors, they just have to take the tail section off to access the fuel tank and not have to expose the airbox and throttle bodies. 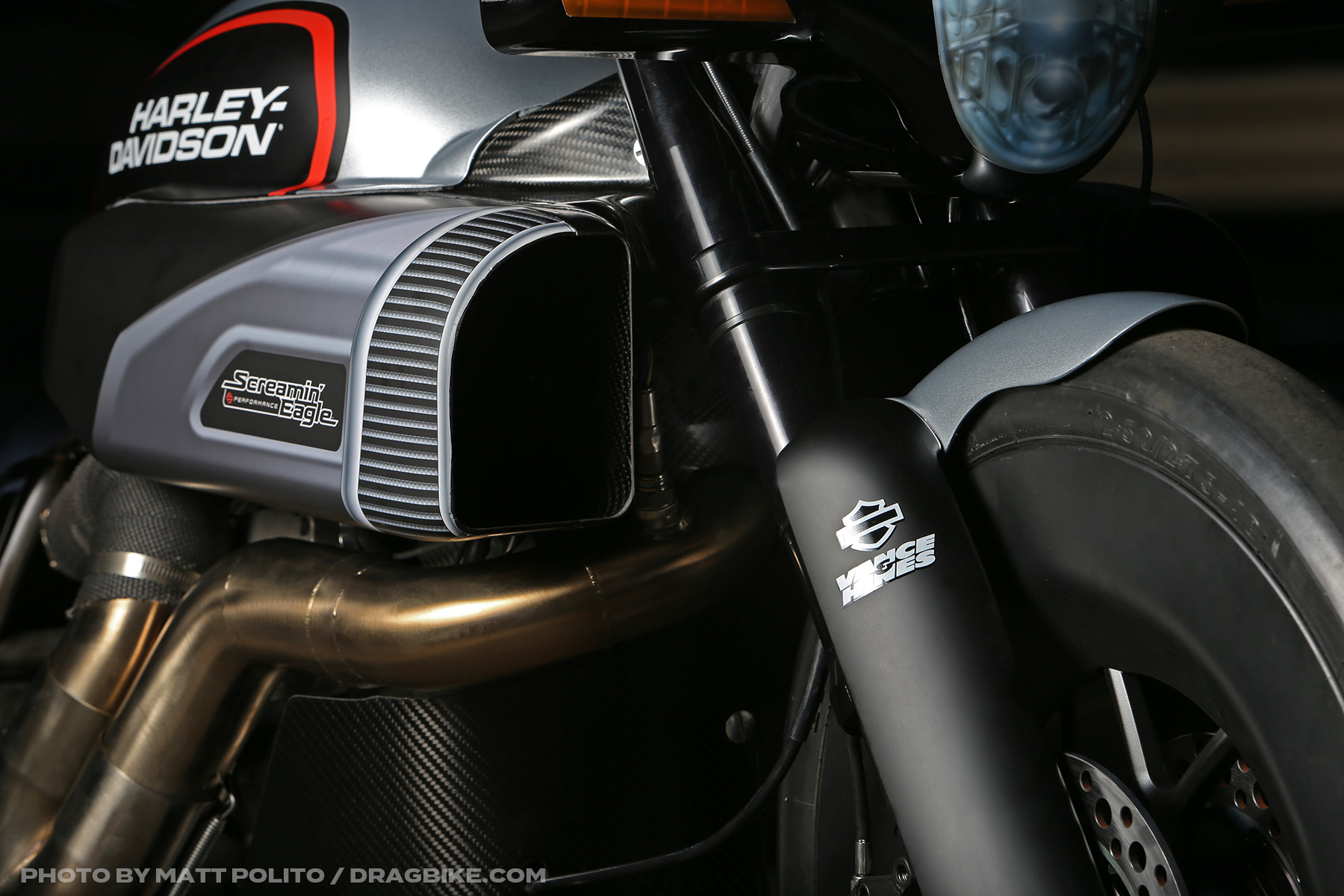 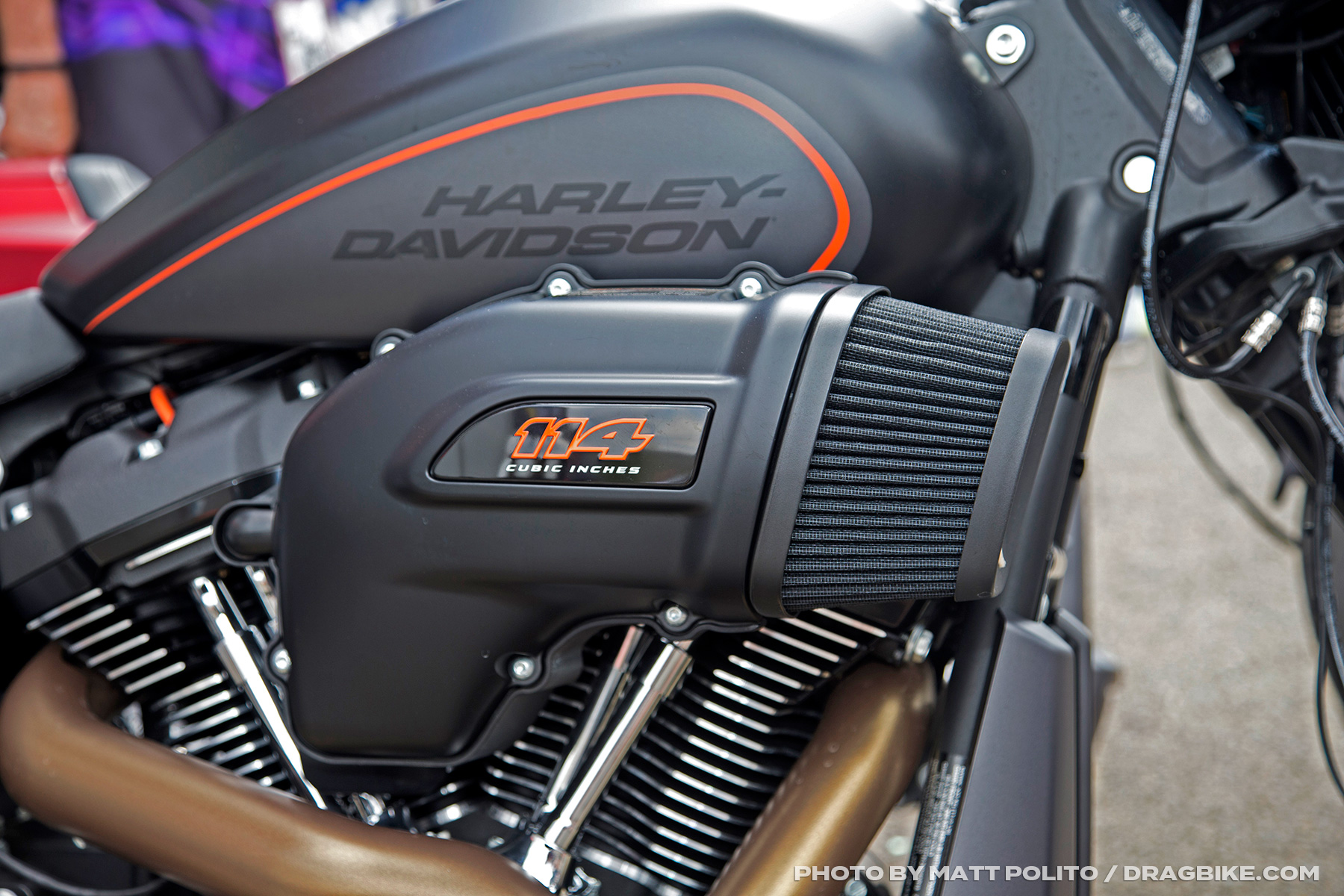 Tank-to-tail height difference is mandated by NHRA. If the difference on the stock bike is large, NHRA allows only two inches on the race bike. But this difference is between the tank and the rear fender. The tail on the FXDR race bike is higher than the old Street Rod race bike because the stock FXDR has a “second seat” cover that sits on top of the fender. The race body has the second seat cover molded over the fender. This line is where the two-inch maximum is measured. 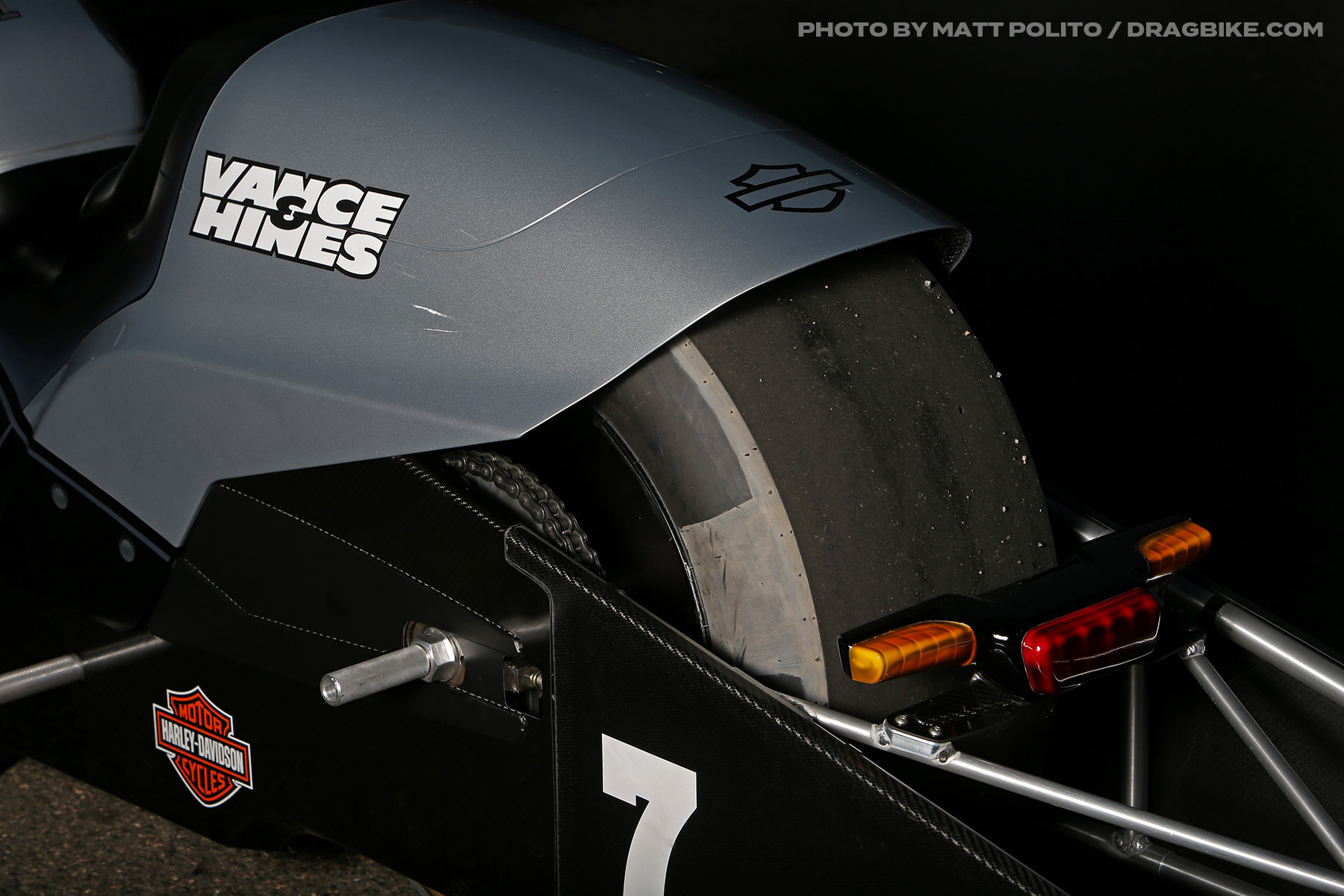 The front fairing deviates from the stock cowl most notably with the size. “The NHRA gave us the maximum size of the fairing and windscreen and we designed it to those specs,” said Hines. 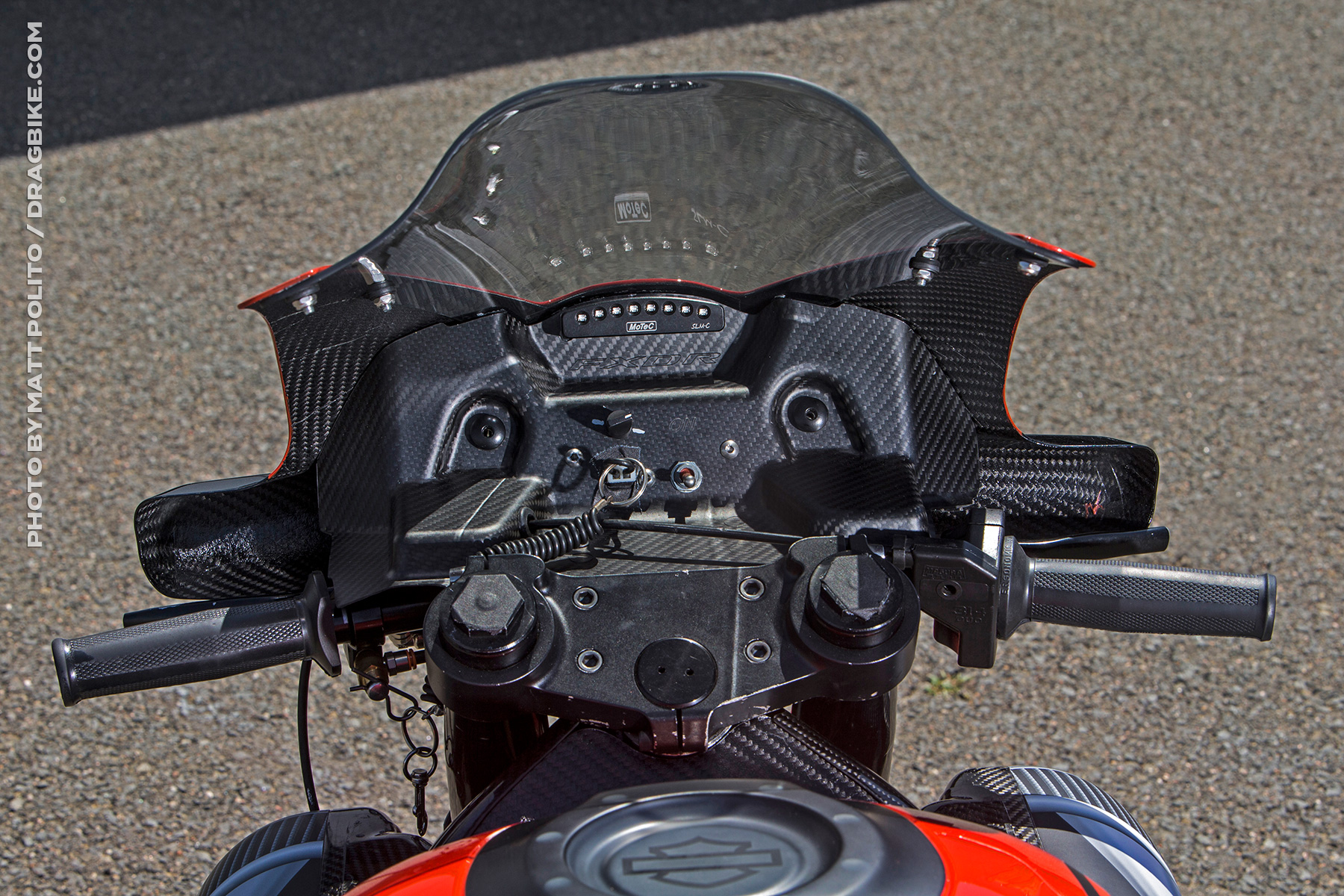 The large turn signals are an integral part of the front cowl. The NHRA required that the turn signals maintain the same position in relation to the headlight as the stock bike. In this position they fall just in front of the handlebars. (This is not quite the case for Angelle’s bike as she has a different handlebar and foot peg configuration than Hines’ and Krawiec’s bikes). This positioning looks like it was done for aerodynamic considerations but was more of a safety feature according to Hines. 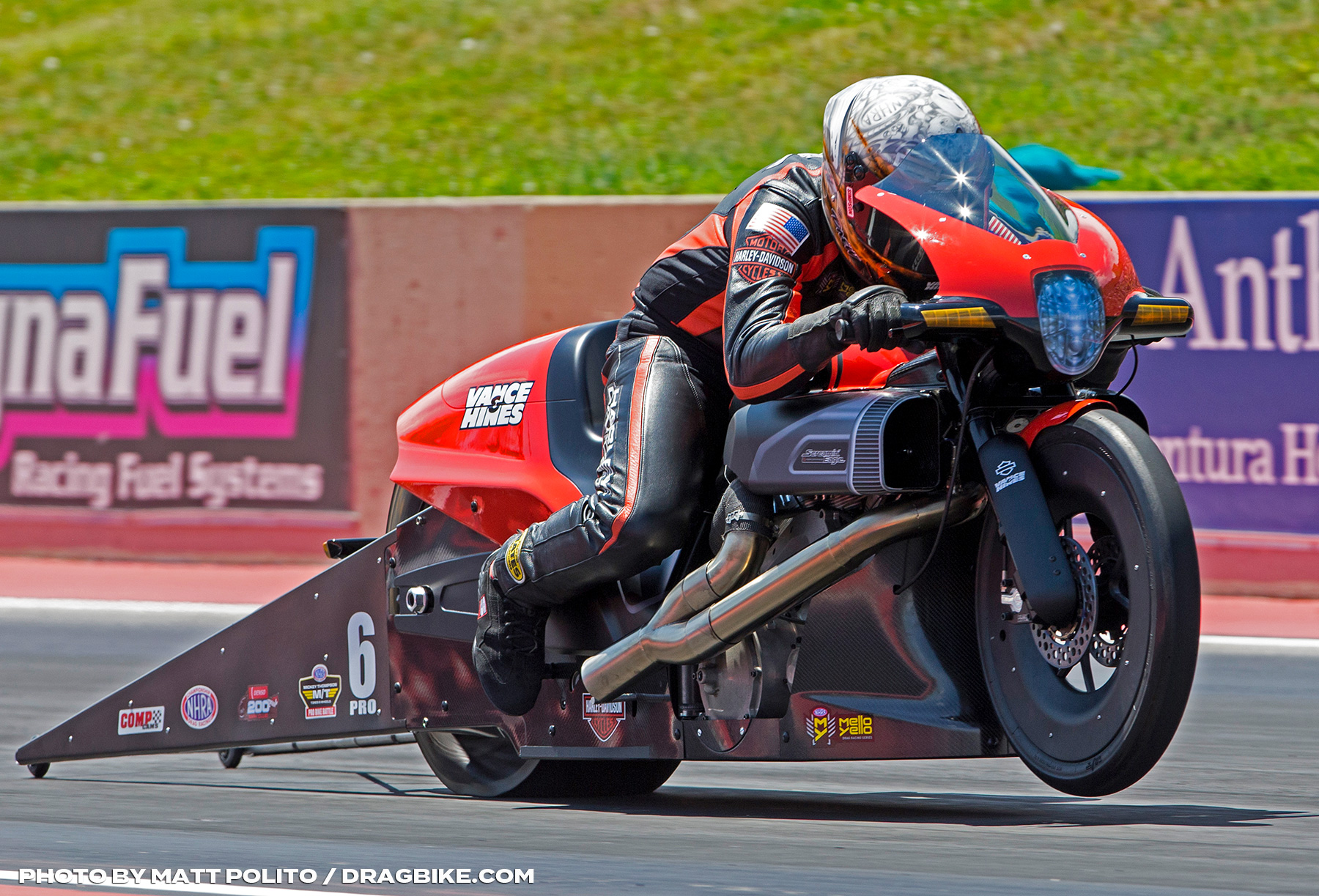 “It’s actually not for aerodynamics,” he said of the turn signals. “People think it’s an aerodynamic advantage but I will go on record saying that the turn signals create more drag. We like it because it makes it easier to grip the brake and clutch. It takes the wind off of our hands.” 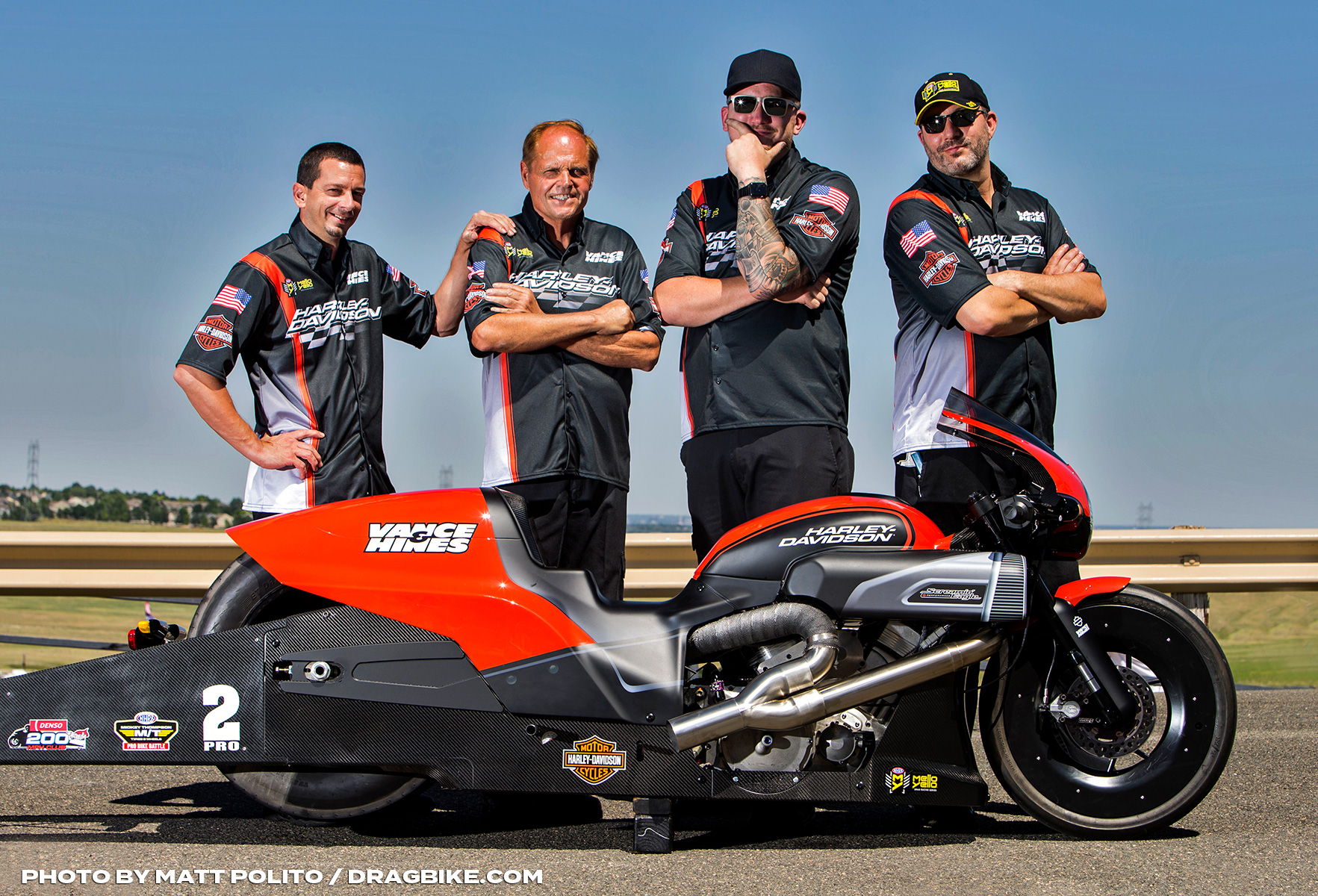 The dual race bike scoops mimic the single scoop on the stock FXDR (which again was designed with the race bikes in mind). The modeling and texture of the stock scoop and air filter are printed in vinyl and applied to the carbon fiber scoops. 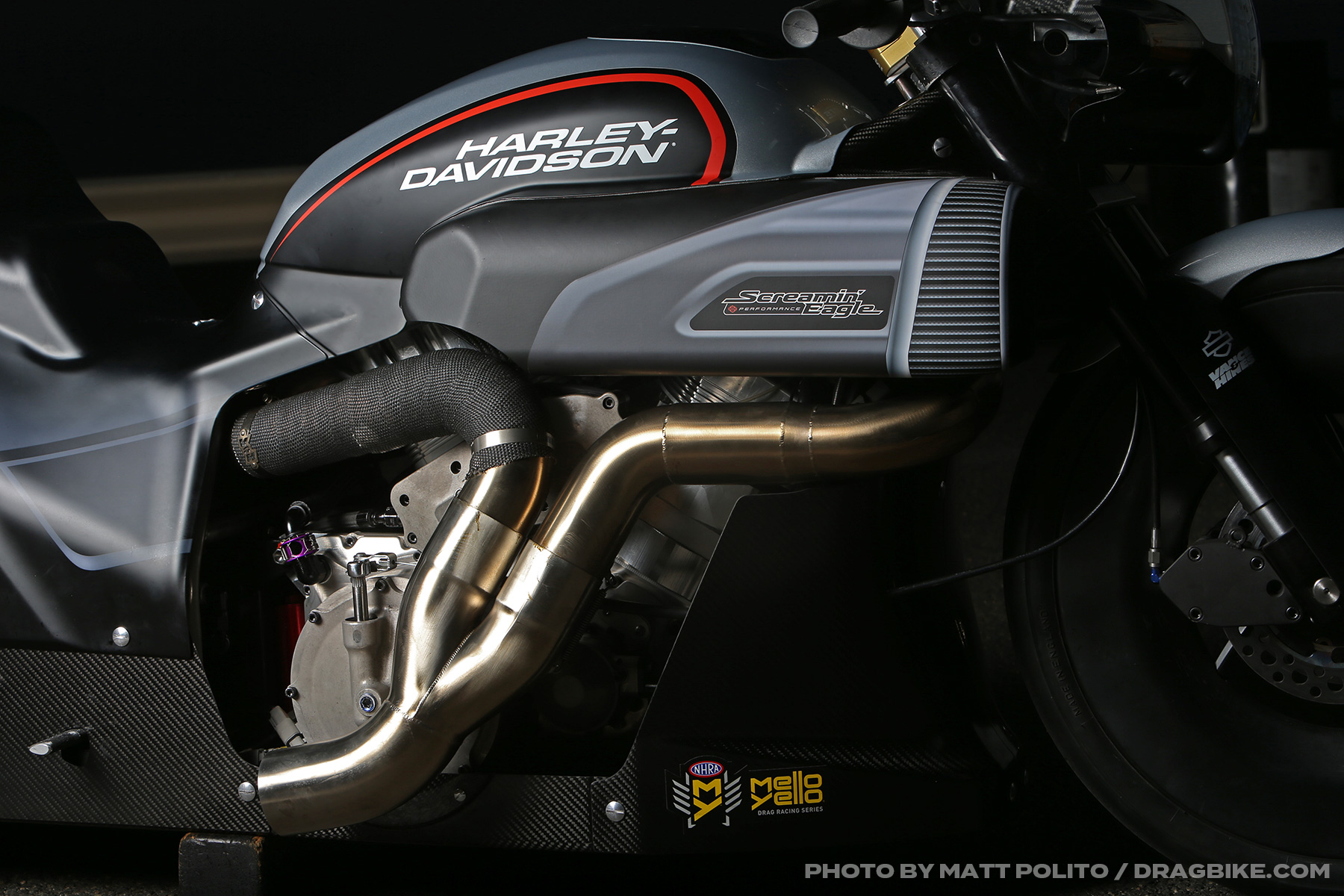 And no, they do not have dimpled belly pans.

Hines and Krawiec’s bikes were painted in traditional H-D orange while Angelle’s bike is dressed in silver. All paint was applied by Gunslinger in Golden, CO and were delivered to the team at Bandimere Raceway just prior to the Mile High Nationals. 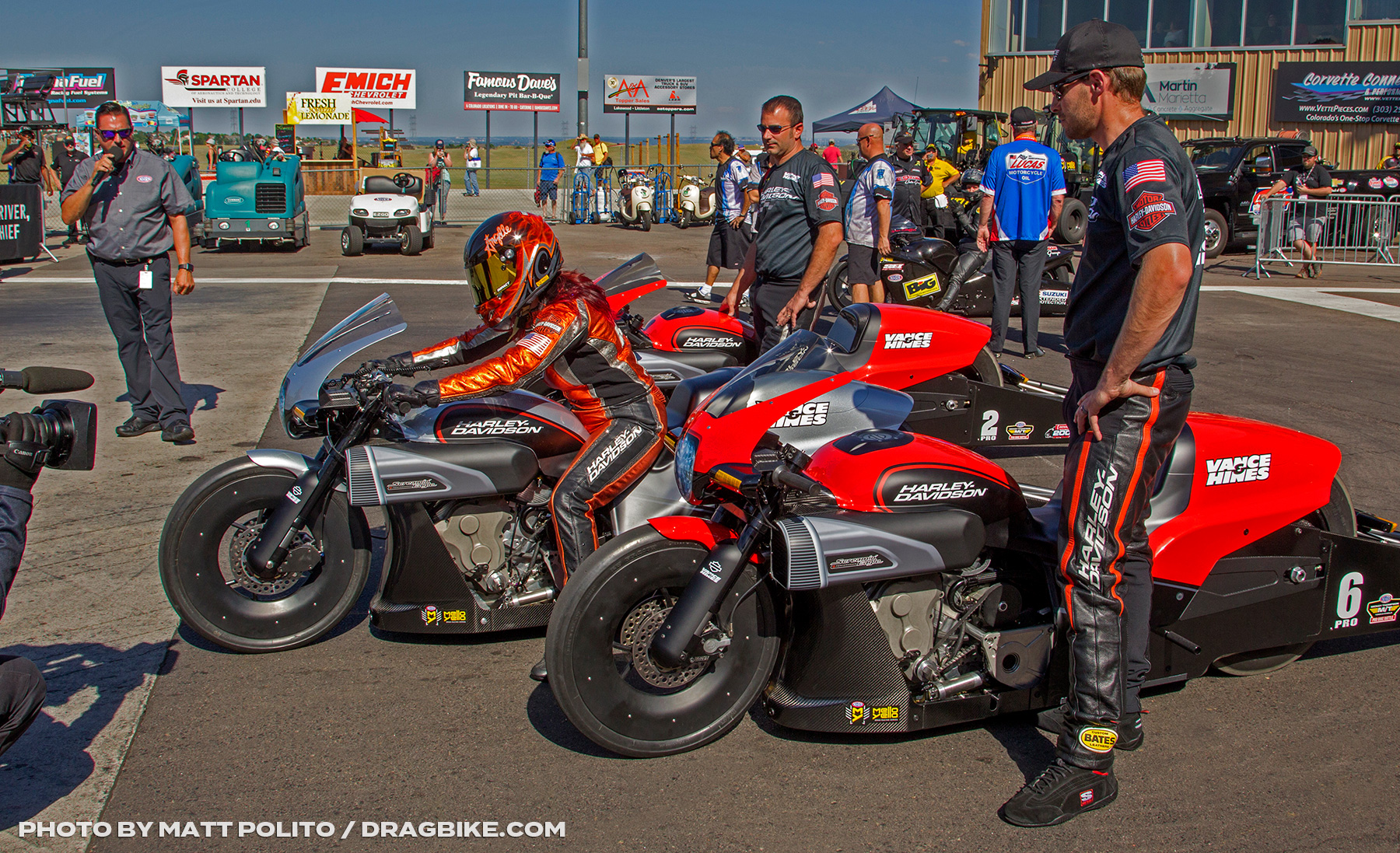 The new FXDR race bikes had a great debut in Denver. Hines led early qualifying but admittedly missed the clutch set up in the cool air of Saturday evening’s session and ended up in the fourth position. He went on to set Low E.T. of every round of eliminations on Sunday including the final round were he beat teammate Krawiec 7.174 to 7.222 for his sixth win of the season. 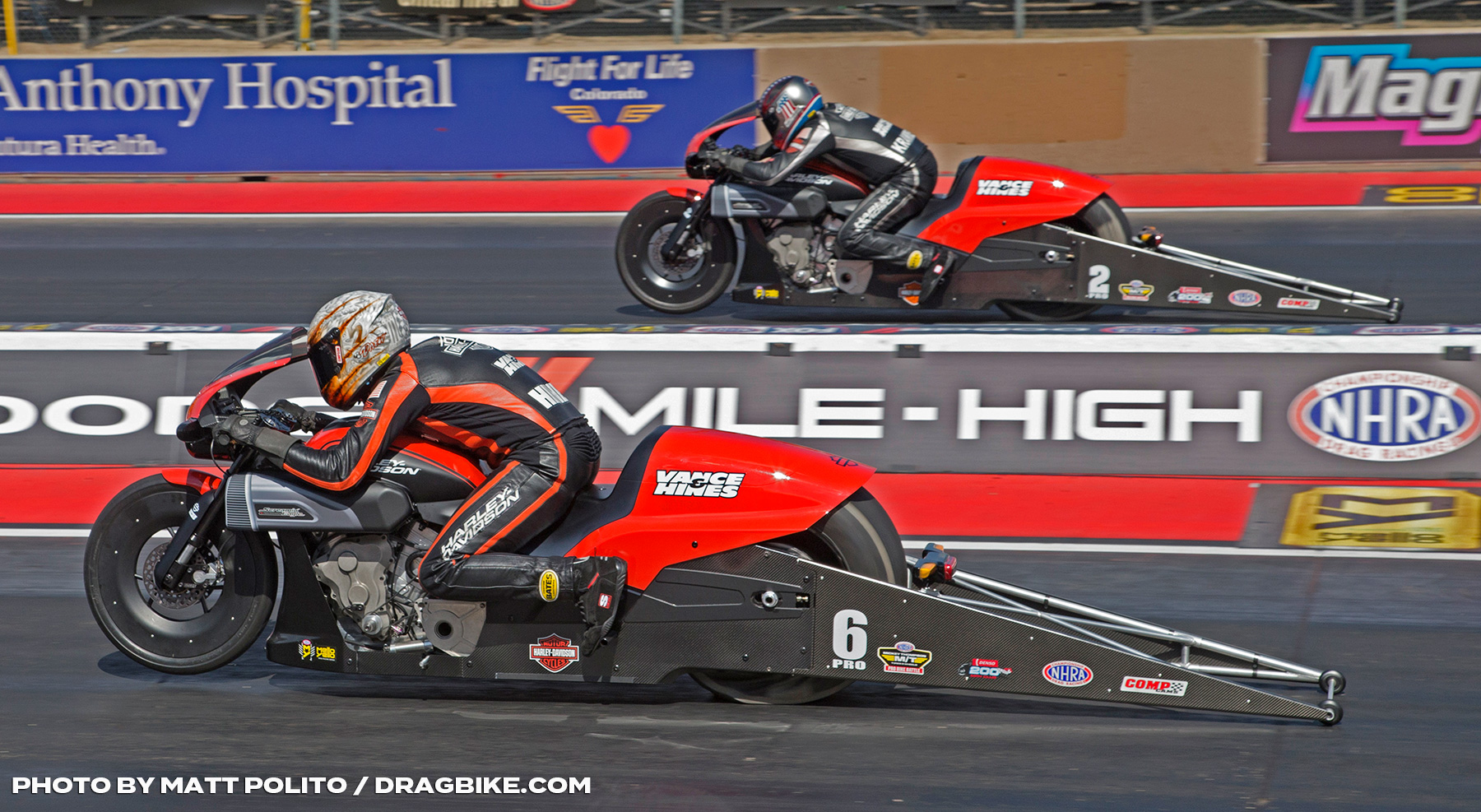 In Sonoma, Hines and the FXDR completed the Pro Stock Motorcycle “Western Sweep”: winning Denver, the Sonoma Pro Bike Battle and the Sonoma event. It marked the first time Hines, the winningest motorcycle drag racer in NHRA history with 55 wins, has accomplished the feat. 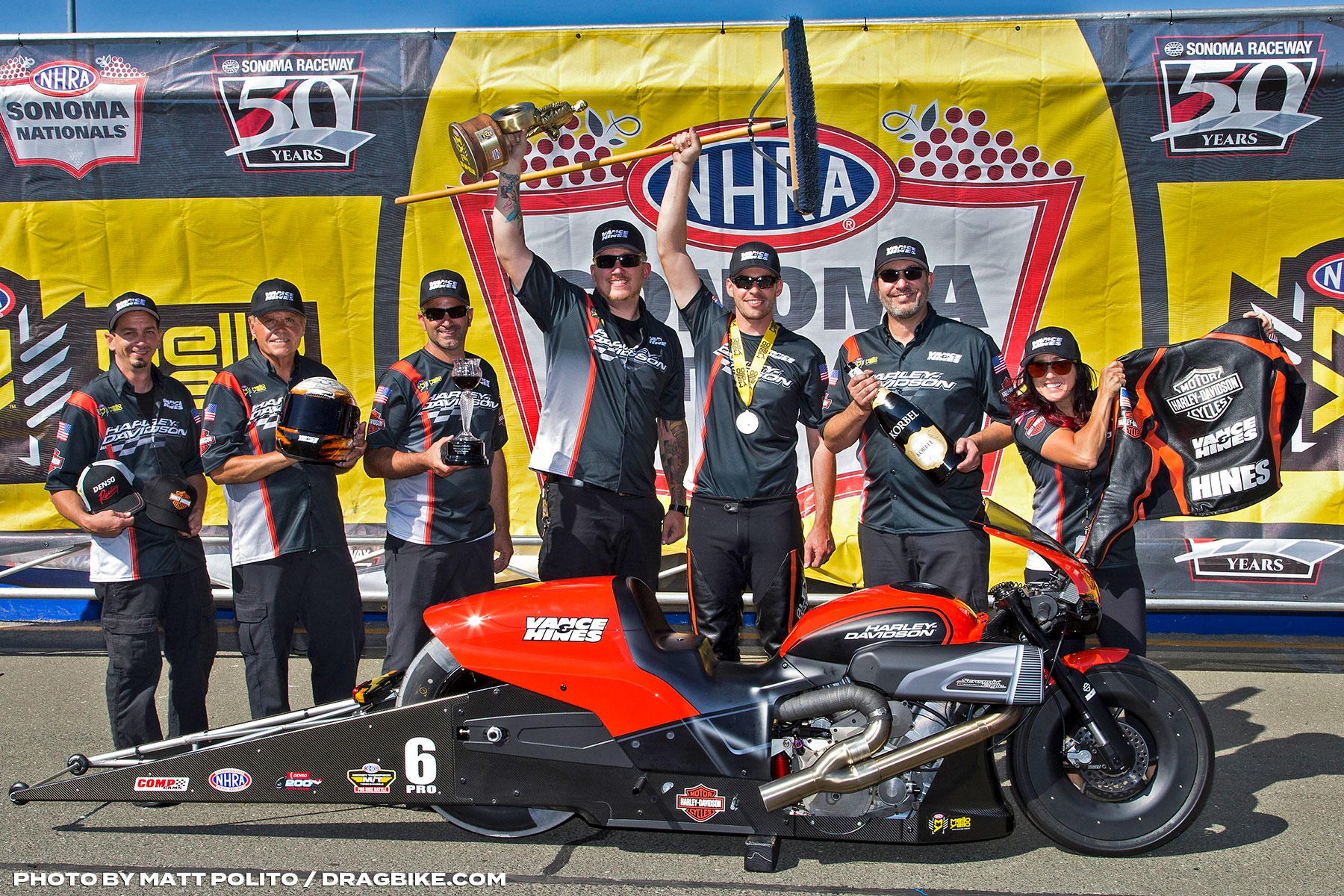 The new FXDR drag bike seemed to come out of nowhere and hit the track with instant success but in fact it was a long arduous process. They made it look easy but behind the scenes, there was a massive amount of screen time and a mountain of epoxy dust.

From the V-Rod to the Street Rod and now to the FXDR, the evolution of the Harley-Davidson Pro Stock drag bike continues.