The victory boosts Hines past his Harley-Davidson® Screamin’ Eagle®/Vance & Hines teammate Ed Krawiec and into the Countdown points lead. Krawiec, the top seed for the Countdown, lost in the second round on Sunday. 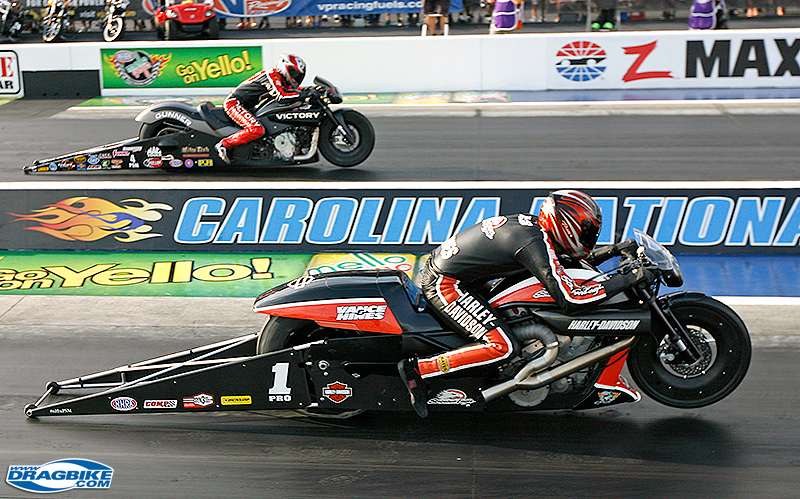 “This was a big day to use my V-Rod to capitalize,” said Hines, a four-time NHRA Pro Stock Motorcycle champion. “I had a chance to move up and take out some of the other top teams. This Pro Stock Motorcycle class is so tight right now that you need to take advantage of every chance you get.”

After the first of six rounds in the Countdown playoffs, Hines leads the Pro Stock Motorcycle field with 2,193 points. Krawiec is second with 2,173 points.

Krawiec was the top seed for the event in Charlotte, posting a best Elapsed Time of 6.851 seconds in the final round of qualifying on Saturday. Hines qualified third at 6.869 seconds.

“I had a V-Rod fast enough to take the number one spot,” said Krawiec. “But in round two my rear tire spun due to the track being greasy. Both Screamin’ Eagle bikes are performing well, and I will bounce back.”

Hines advanced with three wins and defeated Matt Smith in the final to claim the 41st event win of his career and his fifth win at the zMax Dragway track.