“We’ve known all season what potential the Harley V-Rods have,” said Krawiec, “we just needed to find the right performance mix. We are going to keep working and testing to make what we’ve got even better. There are two races left before the Countdown starts and we want to be ready to run for the title.” 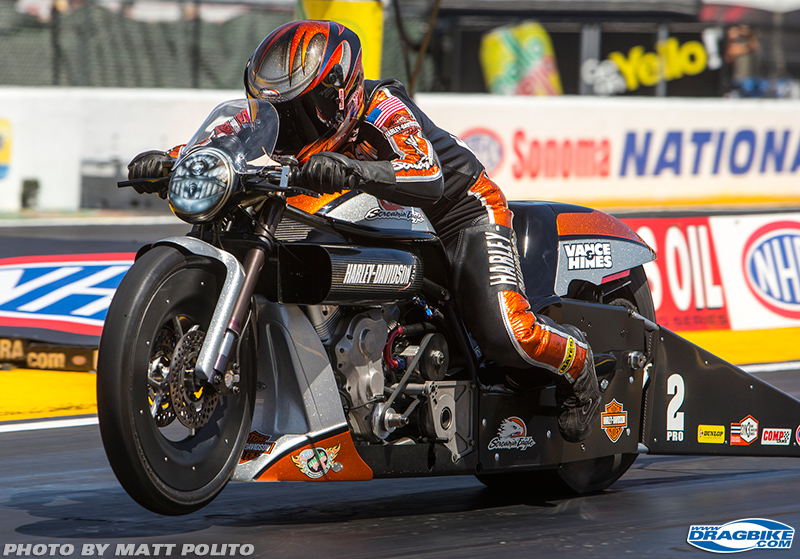 On Saturday, Krawiec won an all-Harley final in the NHRA Pro Bike Battle when Hines fouled at the start. The Pro Bike Battle is a special event conducted during qualifying rounds at Sonoma and open to the top-eight qualifying performers from the previous season. Hines defeated Hector Arana and Hector Arana Jr. to reach the final, while Krawiec advanced with wins over Scotty Pollacheck and Jerry Savoie.

“We started with this power combination on the V-Rods in Denver and now after Sonoma, we’ve got some valuable data from a sea-level track,” said Hines. “We are preparing for the next race at Brainerd and then will head into the U.S. Nationals and the Countdown with some momentum.”

Krawiec defeated Angie Smith, Steve Johnson and Pollacheck to reach a final-round match with Savoie. Krawiec posted an ET of 6.881 seconds to better the 6.891 second-run of Savoie, a margin of victory of about 14 inches. Krawiec now has two victories in five final-round appearances this season and has 29 final-round wins in his career.

The Harley-Davidson Screamin’ Eagle/Vance & Hines drag team will be back in action Aug. 20-23 at the 34th Lucas Oil NHRA Nationals at Brainerd International Raceway in Minnesota.