HRP headed to South Georgia Motorsports Park this past weekend with one goal in mind, get the world record back from Kirby Apathy. At last year’s finals, Kirby and Michael Ray, riding the Terminator bike, slugged it out to see who would take the world record from Johnny Vickers. In the end, Michael ran the quickest pass in history at 7.06, but it was Kirby that came away with the record backing up his 7.07.

The field was short, but a front passing through was going to lead to some great conditions for racing. In qualifying Michael Ray lead the pack with a 7.14 ET off the trailer on Friday night into a strong head wind. Come Saturday, wind was a bit calmer and conditions still good for going fast. In Q-2, the Terminater left hard but spun out about 100 feet out and sent Michael towards the center line causing him to abort the run. For Q-3 Johnny Vickers doing the tuning, made a little move to calm the bike down early. When Michael hit the throttle the bike left hard and straight staying hooked up all the way to the finish line recording again the quickest run in history, 7.038 @ 185.26 MPH. 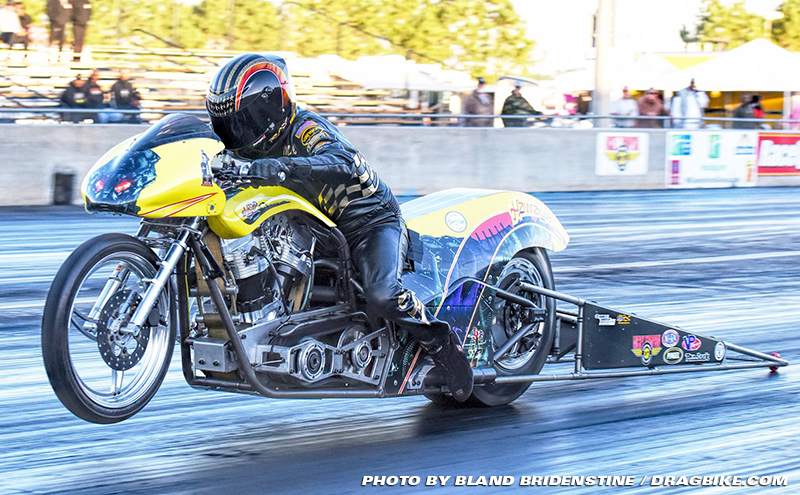 Come Sunday, the conditions had deteriorated a bit but were still good. In round #1, Michael had a bye run recording another 0 pass, running a 7.061 @ 174.93 MPH. Preston Bartlett faced off against the unpredictable Rocky Jackson. It was a good race with both bikes staying even until about half track when Preston pulled ahead running his personal best of 7.30 seconds to take Rocky down. Preston and Walter Halonski had purchased the ex-Dennis Fisher P/F bike a while back and had it refurbished at HRP and now sporting the Gen-4 package. In the finals everyone was watching to see what these two could manage to pull off. Preston got a small jump on Michael at the tree and both bikes moved quickly down the track. At 5 seconds into the run, Preston’s bike went silent due to a later discovered broken power wire, while Michael streaked on to the finish line recording yet again the quickest pass in history 7.011 @ 179.44 for the new world record. Preston was on a good run still managing a 7.555 @ only 145 MPH.

“It was a very good weekend all the way around this past weekend for HRP says President Johnny Vickers. I spent the winter working on new ideas and putting them into play on the Terminater. To put this in perspective, in 2011, Mark Cox went the first 7.09 ET on School Bike #1. Here it is, 6 years and 2 bikes later that we go 7.01 ET. That’s a huge commitment for .08 of a second. It was disappointing that Kirby was broke and could not make the race. We have been going toe to toe for many years and I love to beat him and he loves to beat me. But we always have great races and I am looking forward to meeting up with him in the future.