Johnny Vickers, the owner and thrust behind Hawaya Racing, is veteran in every sense of the term; he served in Viet Nam and he’s been motorcycle drag racing since 1983. While his military service was devoted to the US Navy, his motorcycle drag racing efforts have been spent primarily devoted to nitromethane based racing. He’s a hard-core drag bike nitro pilot through and through. 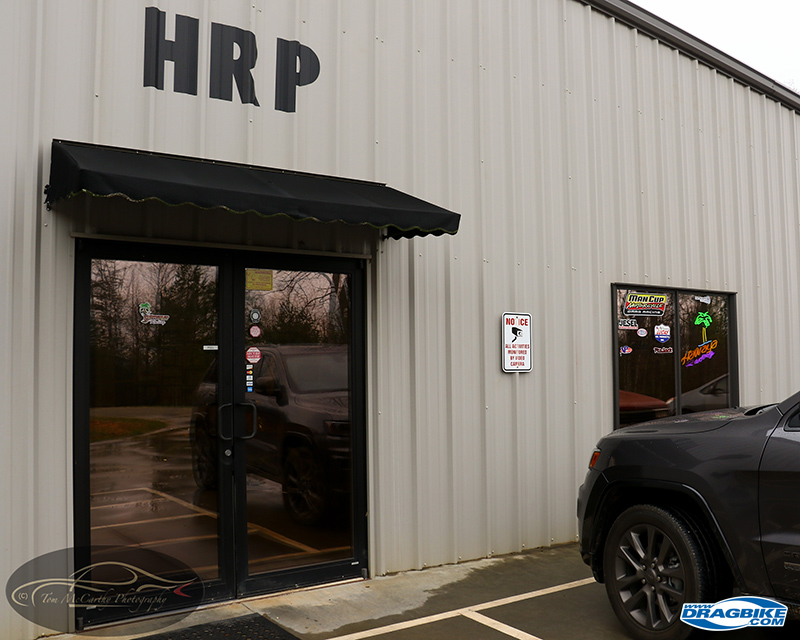 Truth be told, Johnny was a car guy before he became a motorcycle fanatic. Back in 1968, Johnny made his first pass down a drag strip in a car. And it was about this time Johnny started riding on two wheels and he was about age 15 back then. When he was a teen starting out, he had to hide his first bike so dad didn’t see it. 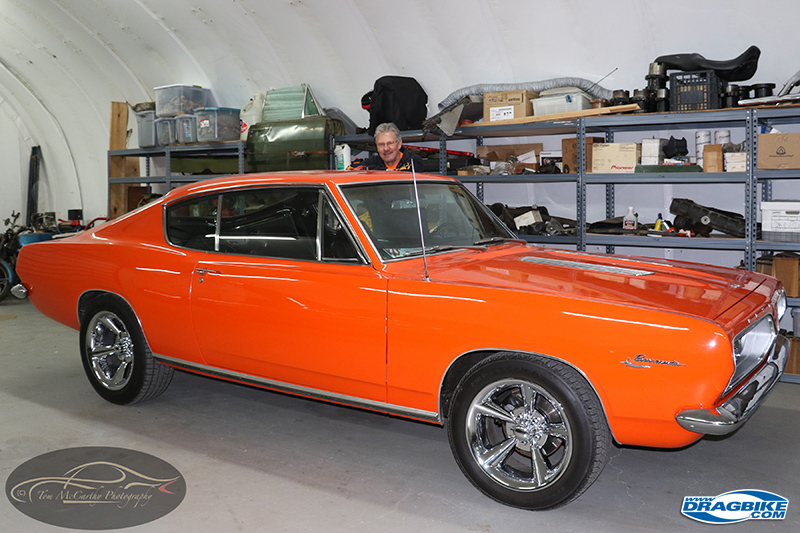 A few years later, after Johnny got out of the service, around 1983, he built a sand dragger for racing at Daytona Beach, a 1977 XL, back when they had the Sand Drags there. Unfortunately, as fate would have it, this was about the time, the sand drags were forever banned on Daytona Beach and Johnny converted that bike to a conventional asphalt machine. 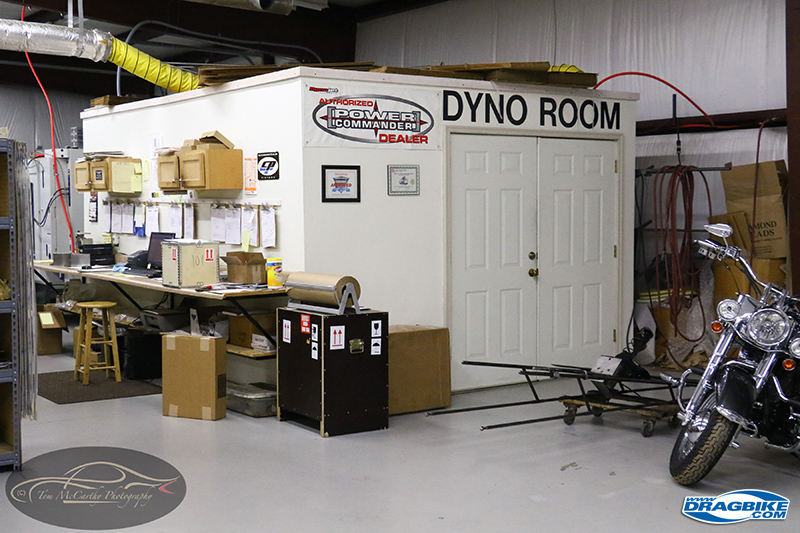 Around this time in Johnny’s 20’s, he was a down-south Louisiana man, from Baton Rouge, and he began going where the Harley’s go to race, back in the HDRA “Harley Drag Racing Association” days when Red Roberts ran the show. One of Johnny’s first events was at Clarksville TN, and he began to become a bit of a regular there. In 1986, Johnny had a significant event occur there; his team showed up at the Annual Hog Rally race sporting Hawaiian shirts, much to the joy of fellow racers. Pete and Jackie Hill, Patti & Mike Romine, and other members of the fuel racing fraternity delighted with the colorful team shirts began calling out to Johnny “Hey Hawaya!” It was sort of a slang version of hey-how-are-you and a mixture of hey-Hawaiian: thus Hawaya Racing was born. Johnny liked it a lot and he just latched onto the play on words. 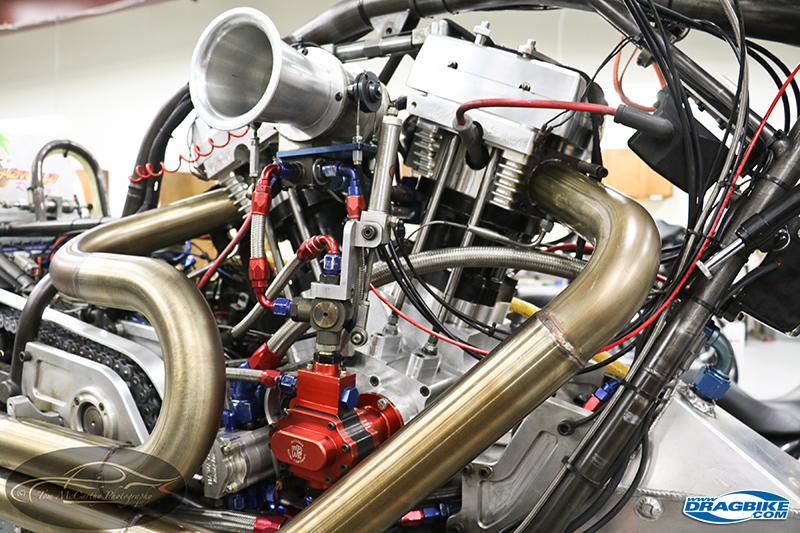 Johnny did start out on a gas powered drag bike in 1983, but that was very short lived. Once he had a taste of nitromethane, he was hooked. In 1983 his first drag bike “Obsession” scored Johnny his first National record which he proudly displays on his walls at Hawaya Racing, signed by Red Roberts. Back then he was going 6.90 in the 1/8th mile on a gas bike. Now he goes 6.90’s and quicker on Nitro Harleys down the ¼ mile. Times have certainly changed for Johnny Vickers and he’s rightfully proud of the accomplishments he has carved out along the way during 35 years of motorcycle drag racing. 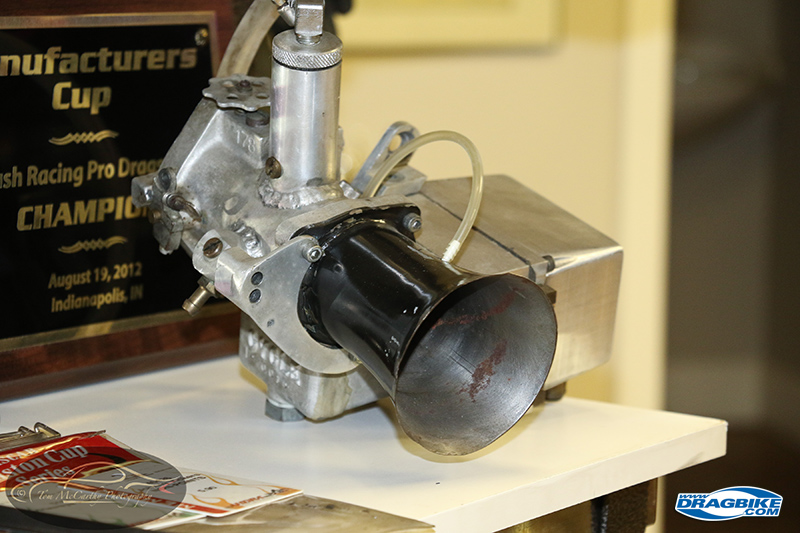 Johnny’s homegrown garage operation started out in a garage so small he had to move stuff around to get a bike in to work on it. Back in his Louisiana days of cutting his teeth, working on street bikes during the week and racing on the weekends, he earned his chops – just like everyone else. First, take care of the customer’s bikes, then work on the race bike. 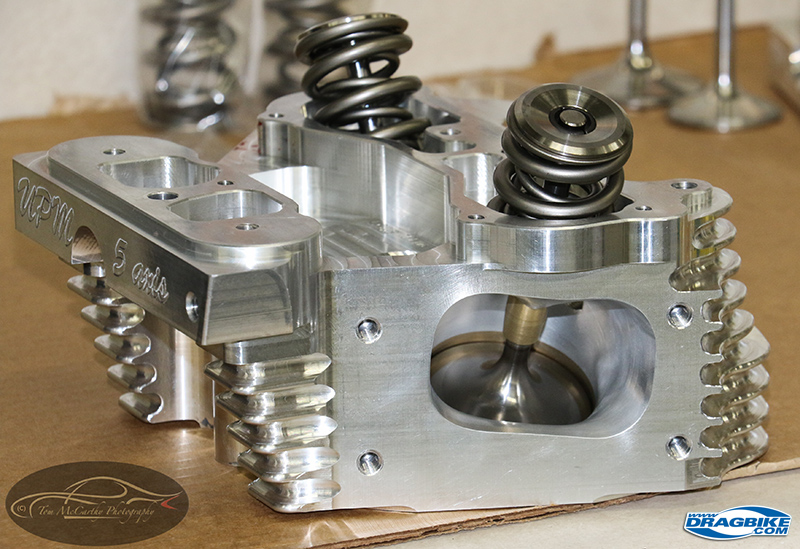 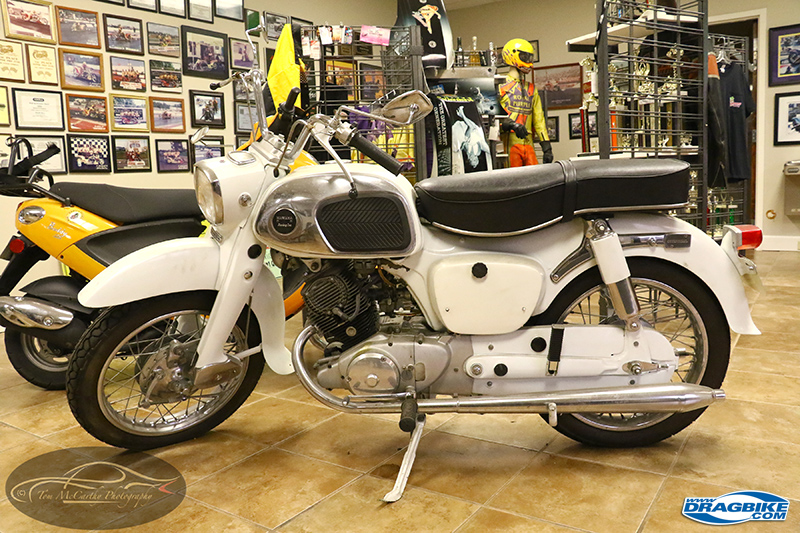 He made the move from Cajun Country to Millers Creek, North Carolina in 2008 and began operations deep in the heart of Nitro Harley country. Racers like Danny Johnson, Jay Turner, and many others hail from this corner of the USA. 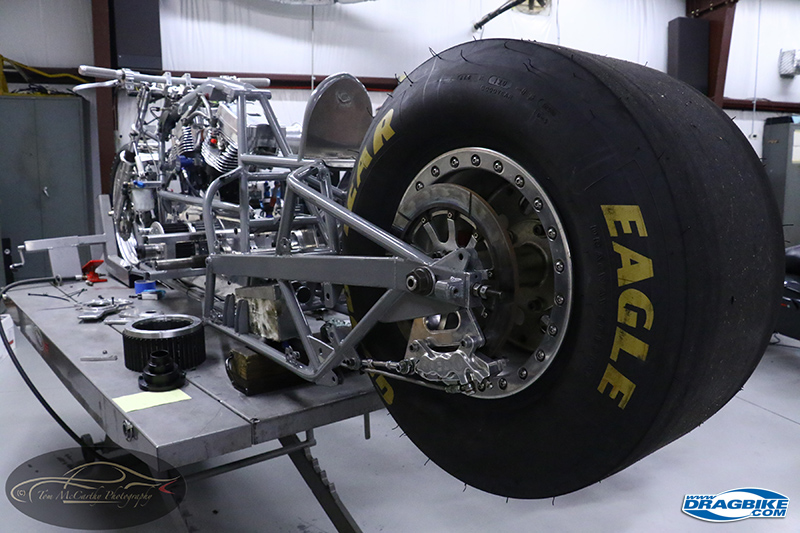 Over the years, Johnny, as a nitro-pilot has accomplished a lot racing in the old Pro Dragster class, now known at the Pro Fuel class. There are 10 NHRA Wallys in Johnny’s trophy case and a very large 2014 NHRA National Championship trophy for his first NHRA Pro Fuel Championship. It’s very important to note that Johnny Vickers has given back heavily to the motorcycle drag racing community in both word and deed. 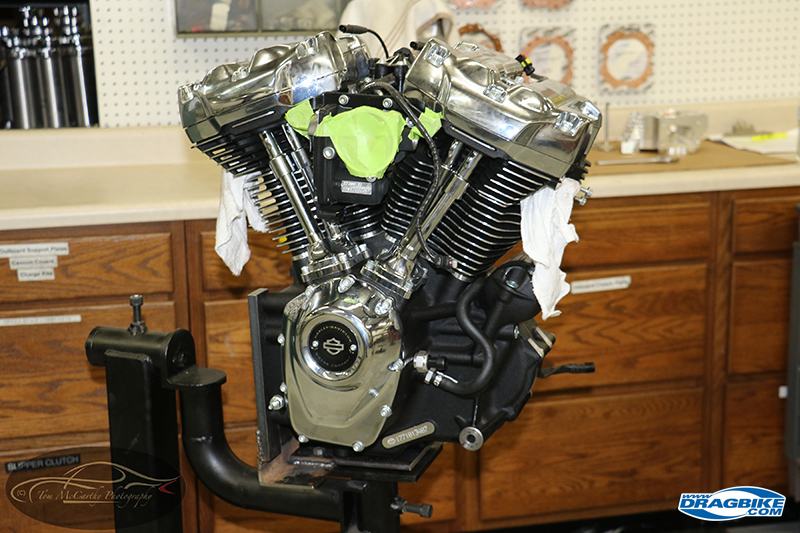 Johnny opened up his formal Nitro School in 2010, accepting in qualified applicants to teach them the art and science of racing nitromethane based Harley Davidson drag bikes. Both drivers and crew members have been accepted into the school. Once in session, the students get the benefit of hearing Johnny talk about his three decades of nitromethane based racing experience. The most important part of the lessons are about how to be safe while racing with CH3NO2. This is not kid stuff, it’s very dangerous and the motorcycles are the fastest and quickest of their kind in the world. Let’s face it, if you have to put on a bullet-proof-vest to go to work, its serious work.

While Johnny’s words have filled the ears of 56 graduate students and over 100 crew members from Johnny’s Nitro School, his deeds have filled the pockets of fellow racers, time and again. For seven years, Johnny was the class sponsor of Pro Fuel racing with Man Cup motorcycle drag racing and he personally put up thousands of dollars of his own money, to give to racers and to support the Man Cup motorcycle drag racing sanction. Yes Johnny earns his living, working with drag racers and the sport, he also gives back heavily. 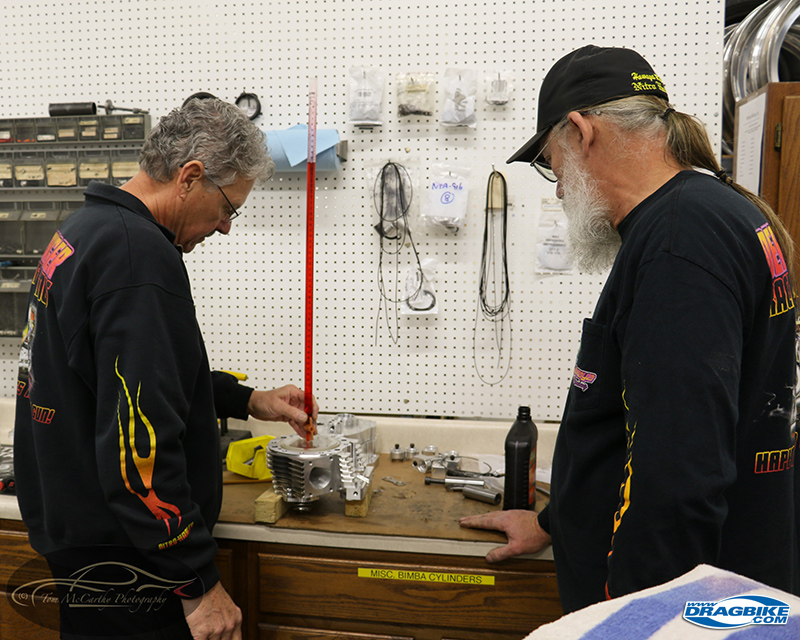 Not only has Mr. Vickers shared his words of wisdom and his cash, he’s played a significant role in upping the performance of the Pro Fuel bikes and the Top Fuel Harleys with his engine development program, making stronger, more powerful V-Twin motors that ANYONE can buy and use. Johnny does the R&D, races the motors himself, and makes the very same motors available to the racing community at large.

In 2013, when Ricky House of Nitro Shark fame, debuted Johnny’s “Stage 1” Nitro Harley motor, a 5×5” bore-square, 196 CID creation from Hawaya Racing, Sharkey not only raced to the finals with it, but after a weekend of racing, the motor had less than 6% leak-down. That’s amazing for a new engine design with a trial by fire. Now in 2018, the Stage II version of this creation is soon to rear its head. 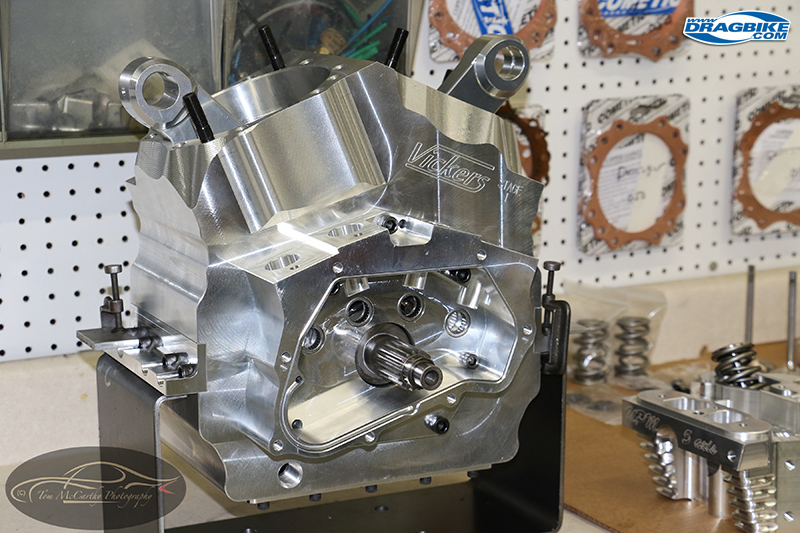 While Johnny has set numerous national records, won his share of races, won five championships and continues to do so. He’s also shared a lot with fellow racers along the way. Perhaps his biggest contribution to motorcycle drag racing has been his Nitro School and the 56 new Nitro racers he has helped get into the sport along the way. In 2018, there are well over three dozen Top Fuel Harley teams ready to do battle and a similar number of Pro Fuel drag bike teams. In one way or another; Hawaya Racing has helped them get where they are today. Johnny would like to thank Leanne, his brother Steve, Walter Halonski, Rockingham Dragway, and the hundreds of racers and fans who have all supported HRP along the way, as the journey continues. 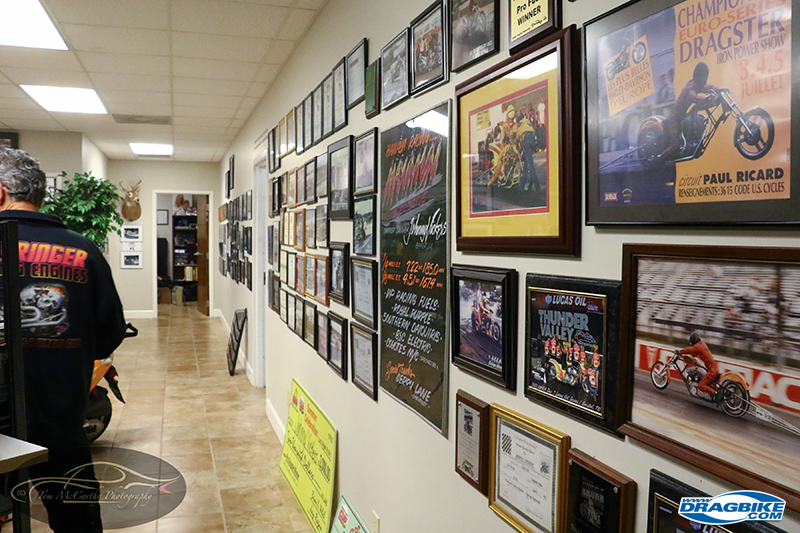