Streaking up the rankings, Hector Arana Jr. ready to rise even higher in Denver

In the span of just three races, Lucas Oil Racing TV rider Hector Arana Jr. has jumped from a distant ninth place in the Pro Stock Motorcycle rankings to a lofty third, just two rounds out of second. Runner-up finishes in Englishtown, N.J., and Chicago, coupled with a semifinal result in Norwalk, Ohio, have done the trick for the 11-time national event winner, and also made him very optimistic about this weekend.

“I’ve felt like I’m on the verge of winning since E-town,” Arana Jr. said. “My riding was down for a few races but now that we’re leaning on Jim (Yates, crew chief) more and more I’ve been able to focus on being a better rider. That comes with having confidence in the bike and I definitely have that now. My next win should be this weekend.”

The only person in the class keeping pace with Arana Jr. lately has been overall leader LE Tonglet, winner of four of six Pro Stock Motorcycle events contested thus far. With the help of Yates, a two-time Pro Stock champion who won Denver in 1996 and 1997 as a driver, Arana Jr. says things have been running much more smoothly this season.

“We started the year by hiring Jim as crew chief and it’s made a big difference,” Arana Jr. said. “He’s really fit into the team and has been a big help in a lot of areas. Dad (Hector Arana Sr., teammate) and I realized we were just spreading ourselves too thin and we needed that extra set of experienced eyes to oversee everything and help us. 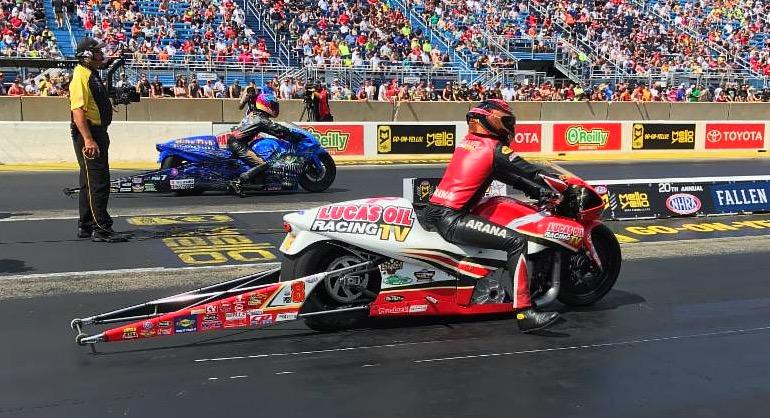 “We’ve had the power all along and this year we’ve been able to sneak up on the set-up the bike wants. We’re much faster and more consistent now.”

Arana Sr. has missed the last two races after having emergency shoulder surgery following the Englishtown race. Arana Sr. was changing a tire on his team hauler on the side of the New Jersey Turnpike when he tore his rotator cuff. He hopes to return to the series by the end of the summer.

Not having his father by his side, as he’s had his entire career, could have paralyzed Arana Jr., but instead it has energized him to try harder.

“Well, with Dad not here, I feel the responsibility of carrying the Lucas Oil and Lucas Oil Racing TV names to the fans,” Arana Jr. said. “I’m the guy that has to represent not only our sponsors but our family name, so the pressure has ramped up for sure. But Dad is doing great and he’ll be back soon enough and I’m excited to think about his return. I miss him being here.

“Bandimere is one of my favorite tracks on tour. The Bandimere family is so great to all the racers and the fans and they put on a first-class event every year. We’ve also done really well on the mountain, winning up there and setting records. In fact, one of my goals this weekend is to get the track ET and speed records back.”

Pro Stock Motorcycle qualifying sessions are scheduled for 5 and 7:30 p.m., Friday, and 4 and 6:30 p.m., Saturday. Eliminations begin at noon, Sunday. FOX Sports 1 will carry the first two rounds of qualifying action live from 6-7 p.m., Friday. The FOX Network will carry eliminations live from 1-4 p.m., Sunday. (All times are local and subject to change.)