“I get butterflies when I think about this race because I know we have a great chance to win,” Arana said. “In fact, I can give you three good reasons why we’ll take home the Wally.”

The 11-time national event winner has been adding up the positives.

“First of all, I live up here now,” Arana said. “My fiancée (Nicole Nobile) and I have a place in East Northport, Long Island. That’s important because I’ve won races in every place I’ve ever lived. I was born in Florida and lived there when I was a kid and I won the Gainesville race before. Then we moved to Indiana and I won Indy. Now I live up here, so logically I should win Englishtown.” 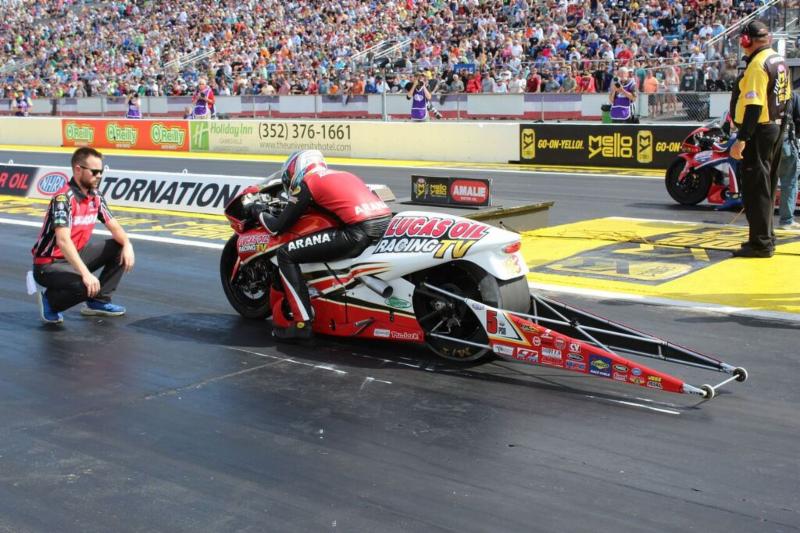 Arana’s second reason for being so optimistic is that his brother Adam will be coming to the race. Adam once raced himself but joined the United States Coast Guard to serve his country. Recently, Seaman Arana was transferred to Kings Point, Long Island, just up the road from his brother.

“The last two races Adam came to I won,” Arana said. “He was stationed in St. Louis when he first got out of boot camp and he was there last year when I won that race. The time before that he was on leave and came to Pomona, Calif., in 2014, and I won that race, too. He’s coming this weekend, so there’s another reason why I should win.”

Finally, there’s Arana’s Lucas Oil Racing TV Buell, which is tuned up and ready for action.

“My results so far aren’t really true to what we are capable of doing,” he said. “This bike is fast and I’m ready to race. I would have run a 6.82 in Round 1 in Atlanta (the last tour stop for Pro Stock Motorcycles), but when I was shifting into high gear during that run I hit that big bump in the track and missed the shift. That’s not an excuse; it’s just what happened.

“We’re on the right track with both of our bikes. My dad (Hector Sr.) will be fast also. I can’t wait to get to the track and start racing.”