Arana held the top position in Pro Stock Motorcycle after the third qualifying session when he went 6.823 at 196.96 mph, but he was edged out by LE Tonglet in the final round. Nevertheless, he equaled his best qualifying effort of the season.

“We are really excited to be running so well,” Arana Jr. said. “I miss my father (teammate Hector Arana Sr.) being out here. He had to stay home to recover from the shoulder surgery he had a few weeks back but even though he’s at home he was still able to help the team out. He’s got little treasures hidden in the trailer and he was able to tell us where to find one of them and we put it in the bike and she woke up. 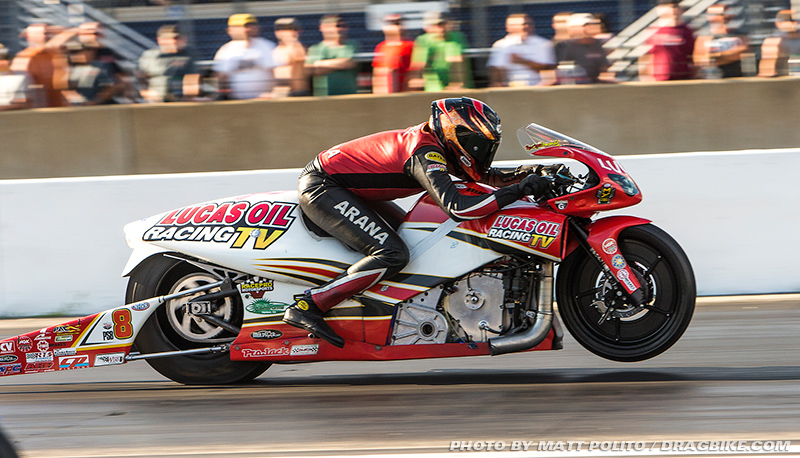 “Setting a track record is cool, especially here because I like this track a lot. It’s not something you set out to do but it’s neat when it happens. Any time we can bring extra attention to Lucas Oil and Lucas Oil Racing TV, it’s a good thing.”

When eliminations begin, Arana Jr. will face three-time world champion Angelle Sampey, who qualified 15th with a 6.949 at 190.62 mph. Arana Jr. and Sampey have not raced each other in the first five Pro Stock Motorcycle races of the season.

“We’re running good so we are excited to get this Lucas Oil Racing TV Buell going rounds and see what we can do tomorrow,” Arana Jr. said. “This will be my first race day without my father. It’s going to be weird. It’s definitely different. He’s not going to be on the line when I run. I won’t be able to watch his runs or sit with him in the staging lanes and talk strategy.

“It’s good that he is still able to help out and he’s been calling non-stop so it’s good. I’m sure that will continue tomorrow. It’s just been super quiet and I don’t really like it but we gotta do what we gotta do until he gets back.”