Lucas Oil Buell racer Hector Arana Sr. is looking to the future with a new Pro Stock Motorcycle that will debut later this year, but he’s not at all ready to give up on his current race bike.

Arana Jr. will race the Lucas Oil Buell in the Summit NHRA Southern Nationals this weekend at Atlanta Dragway, even as he and his team have been preparing a new EBR motorcycle. And he is quite sentimental about the “old” bike.

Arana Sr. scored his first win in Gainesville, Fla., in 2009, and ended up winning five races and the NHRA world championship.

And while that bike remains competitive – he raced to two final rounds in 2014 and qualified No. 6 in both PSM races this year – he knows it’s time for a new ride. Since the Pro Stock Motorcycle class last raced in Charlotte on March 29, Arana and his team have been working on the new EBR. 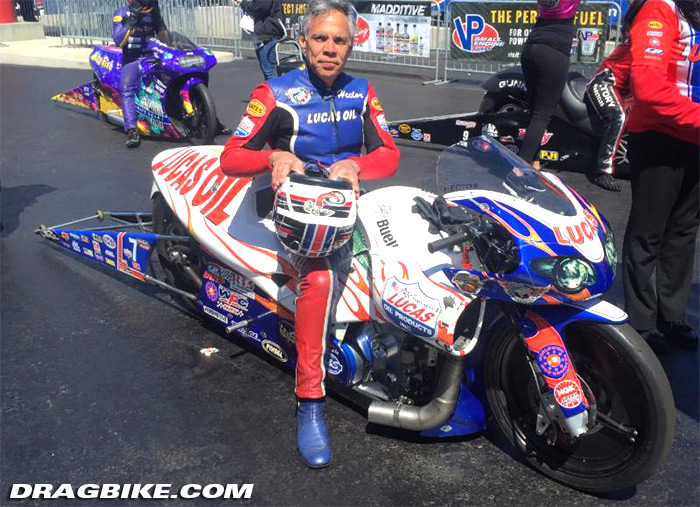 “The five, six weeks we had off, we worked on the new EBR body, trying to get that going,” Arana Sr. said. “We worked on the fearing, and as soon as we get back from Atlanta, we’re going to Indy to test to see if it goes straight.”

If the test goes well, the new bike will be presented to NHRA for approval, and Arana Sr. will then race it.

Until then, though, he knows he has a fast motorcycle. Son Hector Arana Jr. set the national speed record in Charlotte with a similar team bike.

“Hector had a good tune-up, and he had everything going for him in Charlotte,” Arana Sr. said. “I was behind the 8-ball, but hopefully we can use some of that information and transfer it over to mine.”