Report by Tamre Martin, photos by Tom McCarthy and DragRacingwithMary.com

Saturday June 5th, 2021 started with a fantastic laid-back race day morning at Tulsa Raceway Park, Tulsa, Oklahoma. The CT Motorsports sponsored Hog’s Gone Wild Harley Davidson Bagger event had a vibe of calm permeating the drag strip facility, but when Registration and Tech opened and the track started to be prepped, things came to life.
2 rounds of testing got started as well as the organizing of the True Street and the Street Class 20 mile ride. 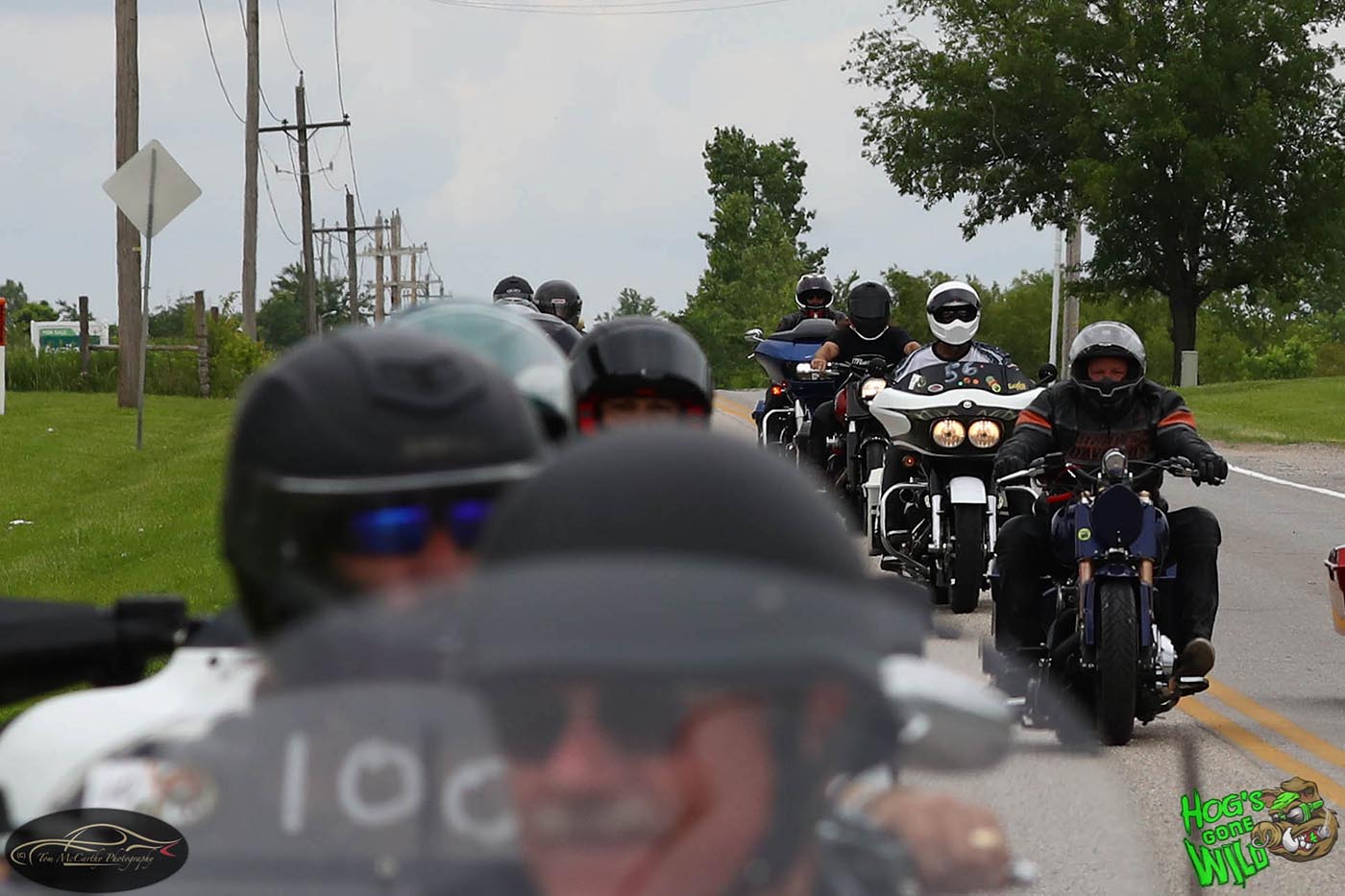 The Power Wheels was something all the kids in attendance enjoyed and a lot of folks took a ride in the 2 seat Top Dragster that was on site. One of those passes was a 4.60 at over 140 mph. That was really something to watch and thoroughly enthralled everyone! The Burnouts for the Susan G. Komen Breast Cancer Foundation got rolling when in the afternoon, HGW’s very own Roger Edgerton took to two wheels in the left lane and did some turning & burning of his own. Thank you to all that donated. Roger certainly was having lots of fun and had the burning rubber going! Race day had truly begun. So here’s what went ‘Down in T-Town!’ 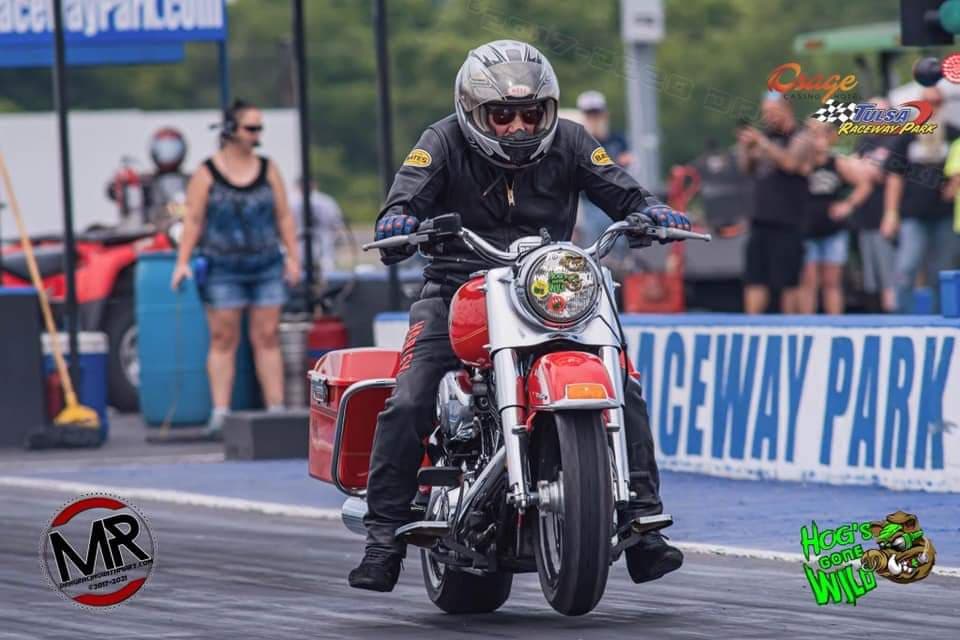 A1 CYCLES PRO STREET CLASS RESULTS
Round 1 saw Alfred Dula vs Jeremy Justice. Dwayne Gee vs Michael Fricke and Ponto vs Spencer Spitzmiller. Anyone that follows the Hog’s Gone Wild races knows that any one of these racers are very capable of getting today’s job done. Dula made it to 2nd rd over Justice. Gee got around Fricke to advance and Ponto got a race out of Spitzmiller and at the finish line it was Ponto for the win. Round 2 matched Dula up with Gee resulting in Dula for the win and Ponto received the bye. Final round was Alfred Dula with the Win light and Ponto the Runner up spot. Great show everyone! 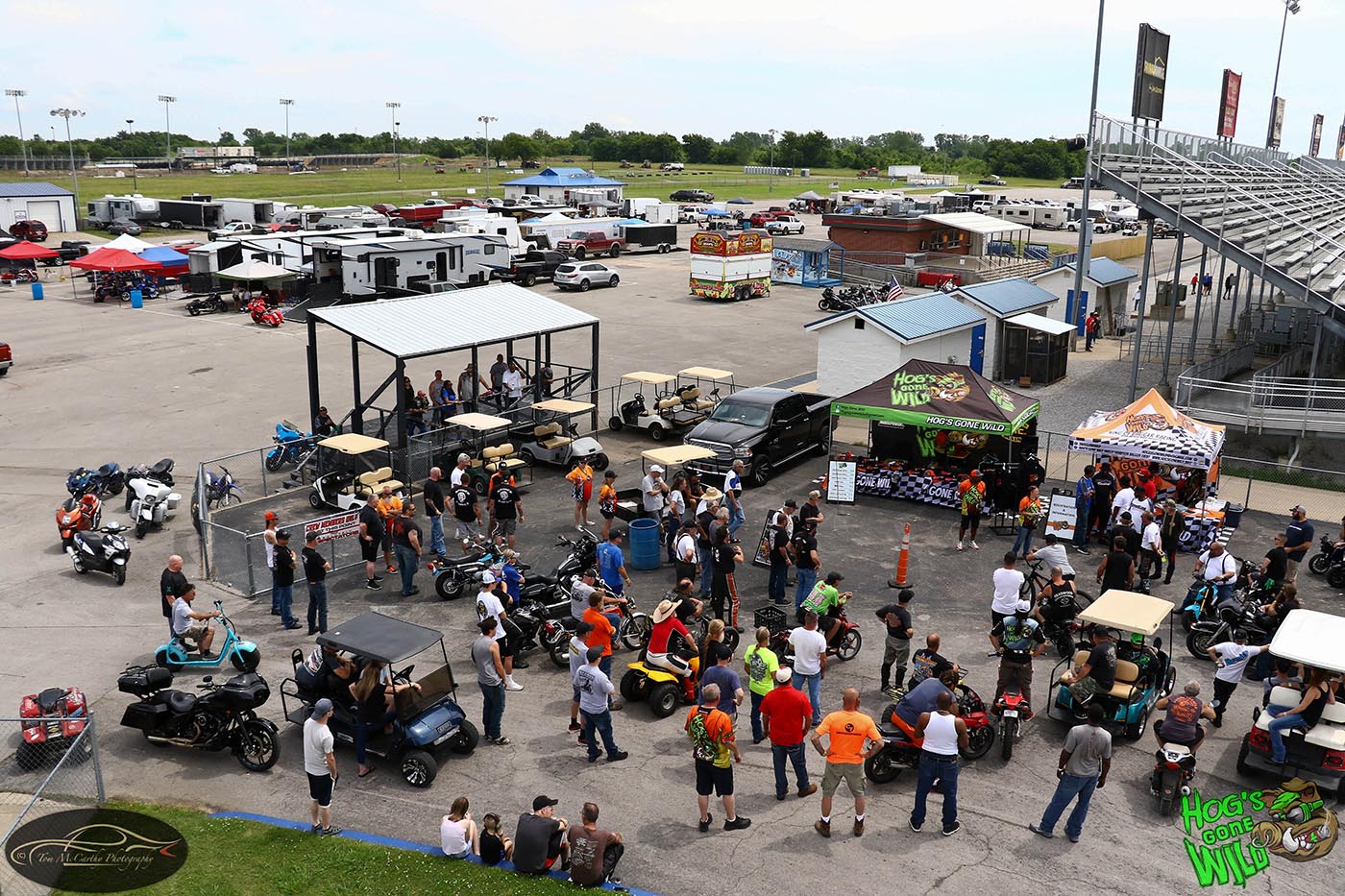 CT MOTORSPORTS HOT STREET CLASS
Hot Street welcomed Khole Sellers and Geronimo Pratt its final round. Khole had his hands full in round 2 against Chuck Briggs/CT Motorsports bike. These two went .166 and .169 respectively on the tree with ET’s of 9.714 to a 9.945 respectively, with a 135.86 mph to a 135.40 mph. Khole Sellers met Geronimo Pratt at the starting line in the final round to get the win light. Good day of racing for both men. 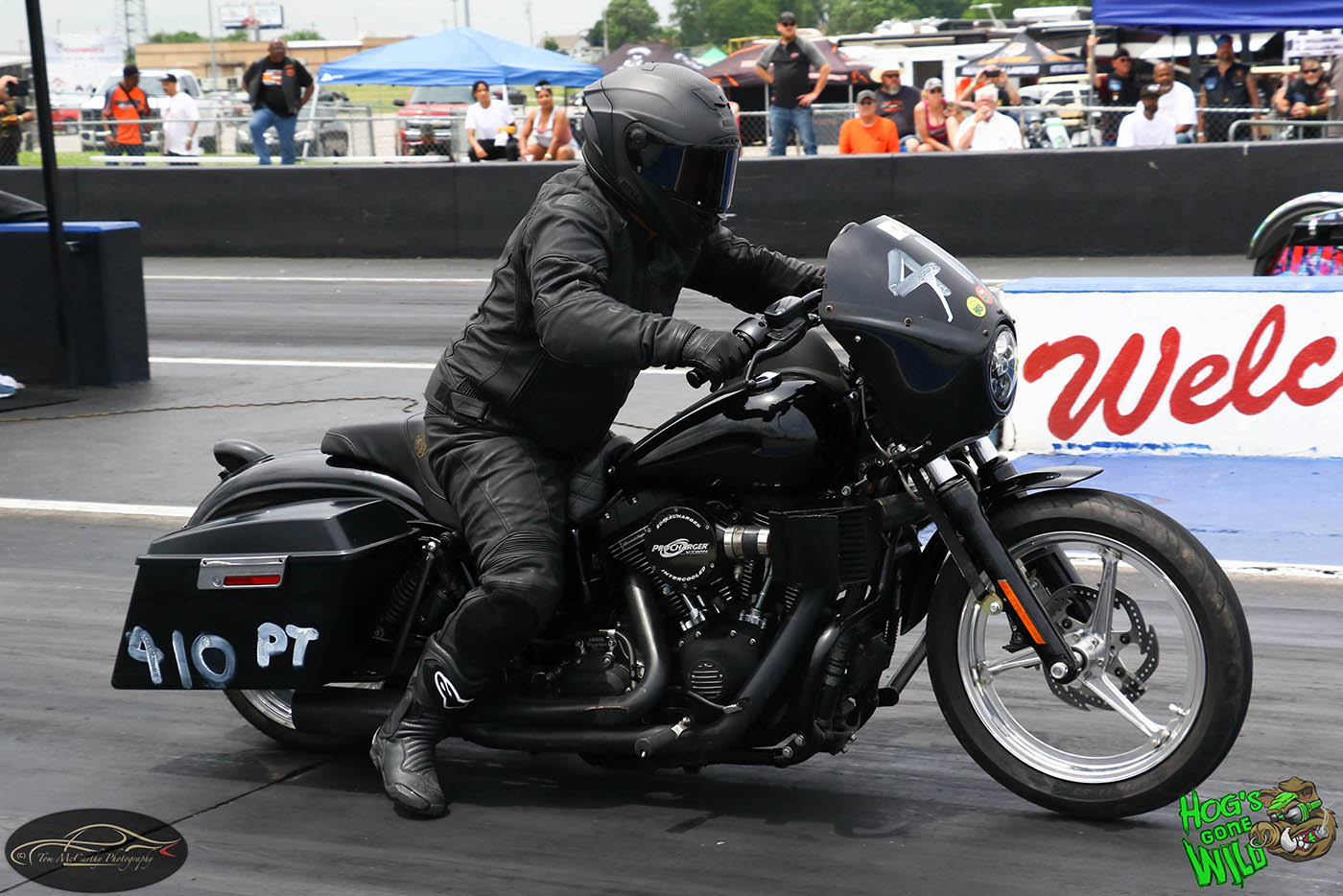 V-TWIN POWERSPORTS NON BAGGER CLASS
Non Bagger class showed some excellent competition when Shawn Stevens nailed an .004 light to get around his opponent in the semi finals to go against David Sposito in the finals. Both Shawn and David were eager to be the first to the 1320′ line yet when all was said and done, Shawn Stevens came out on top. Great job Gentlemen. Great job. 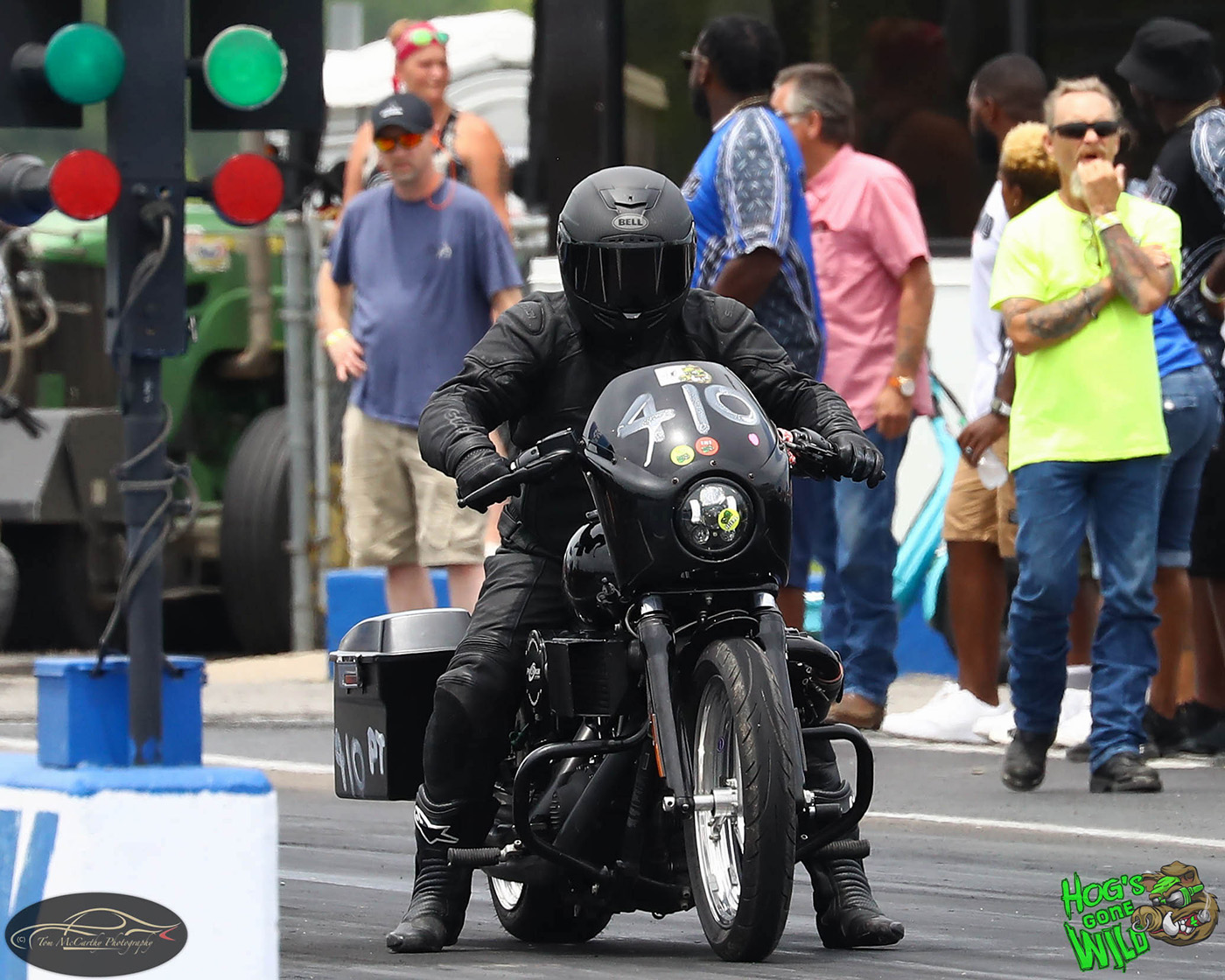 STREET KINGS MOTORSPORTS TRUE STREET CLASS
True Street class may have just been the “Battle of Battles” as both, winner David “Paco” Cartwright and runner up Hamma Ville had nothing but good old-fashion respect for one another after this final. A .003 difference at the finish line!

High praise was spoke to me for their opponent by both Teams and Riders. Paco and the Sheffer Performance owned 2017 M8 Road Glide Special had nothing but praise for Daren Sheffer/Sheffer Perf. for giving him a spectacular machine to ride. This was only Paco’s second outing on the 130ci Harley Davidson out of Evansville, IN., and said the bike was so consistent all day.

Paco wanted to dedicate his win to his friend, John Powell, that gave him his nickname. John passed away from cancer earlier this year and all of us at the CT Motorsports and Hog’s Gone Wild send our heartfelt condolences to all who knew John Powell. Hamma Ville and the Street Kings Motorsports sponsored 2018 Road Glide he did his job and it came down to the finish line. Hamma had lots of thanks to Dwayne Gee/Street Kings Motorsports and everyone on the team as the Street Kings had 5 bikes entered in this event. 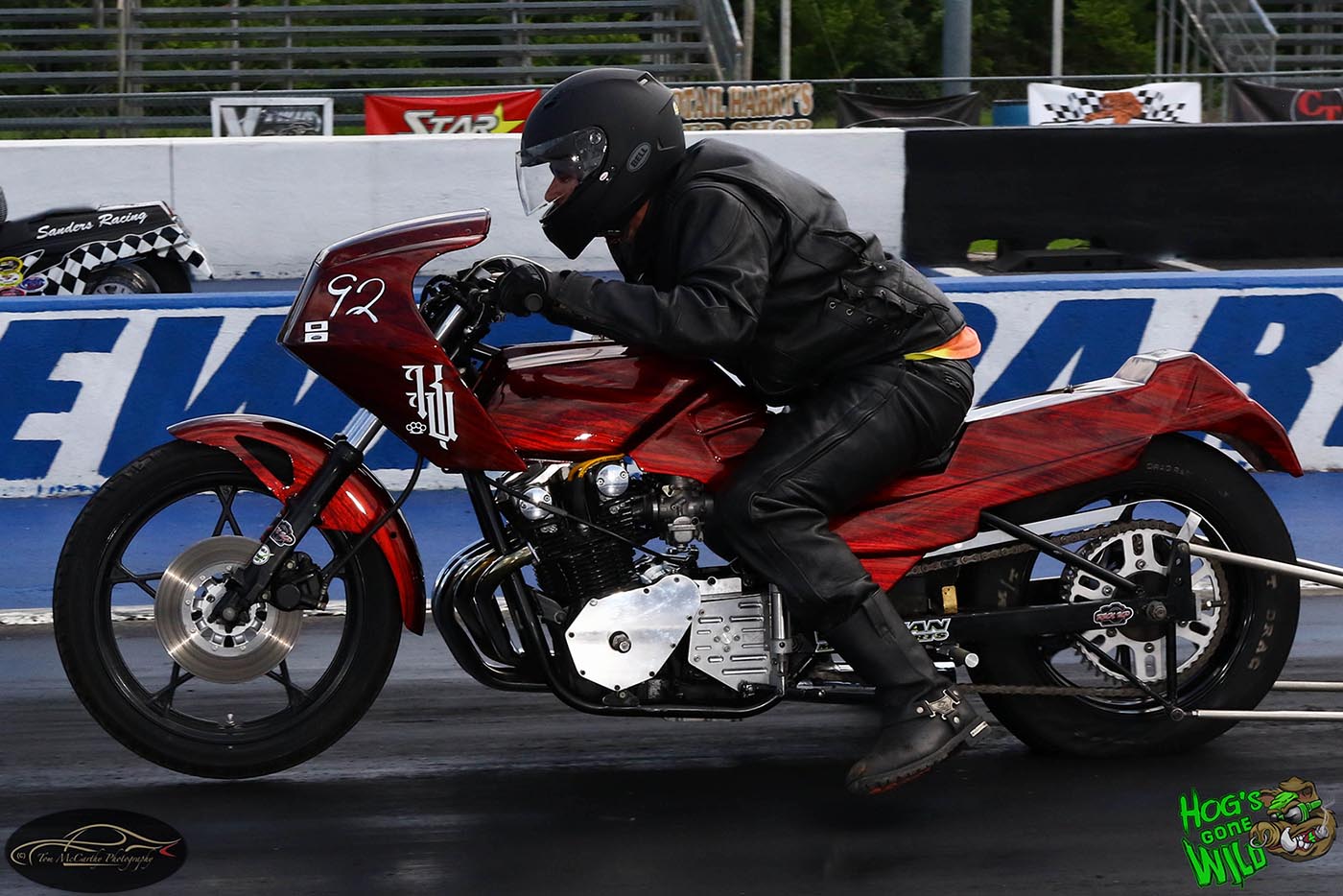 5.60 CLASS
The 5.60 class saw some seriously tight competition between some well-known heavy hitters in the Oklahoma area. Consistency, tuning, chassis setup and the flat flawless riding abilities of Lucas Townsend won the day although his competitors did not give it to him easily. Robert Sanders did his job against his competition to meet Lucas in the finals and he knew he was going to have go for it on the tree. And he almost got there. Robert made Townsend work for it all the way to the finish line and I’ll just let the increments speak for themselves. Big shout out both racers. 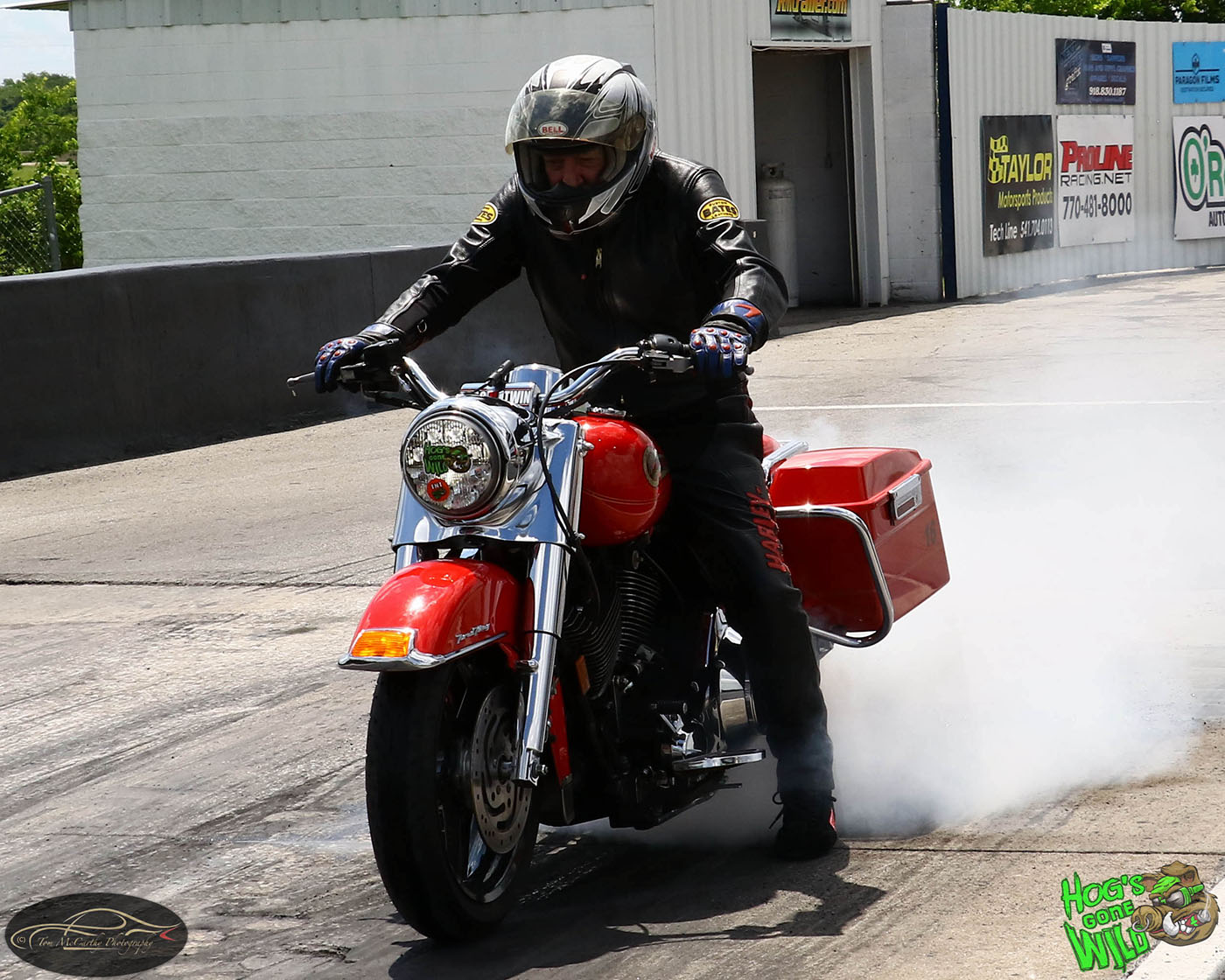 GRC SPONSORED STREET CLASS
Scott Tomsu and his 2017 130ci M8 Road King take the #1 spot. Bill Mahoney, respectively, was runner-up. The increments on this race show that Mahoney had Tomsu but the difference was at the tree. Scott Tomsu is the owner of STFU Motorcycles and he truly did not want to talk about his win with me. He wanted to talk about his finals opponent Bill Mahoney. You see, Bill drove to Oklahoma from California for this race. Bill would drive a 12 hour stretch, pull in somewhere, catch some sleep and repeat, until he arrived at Tulsa Raceway Park. Scott was so impressed by Mahoney’s journey as well as by Bill’s character. Brothers from other Mothers indeed. 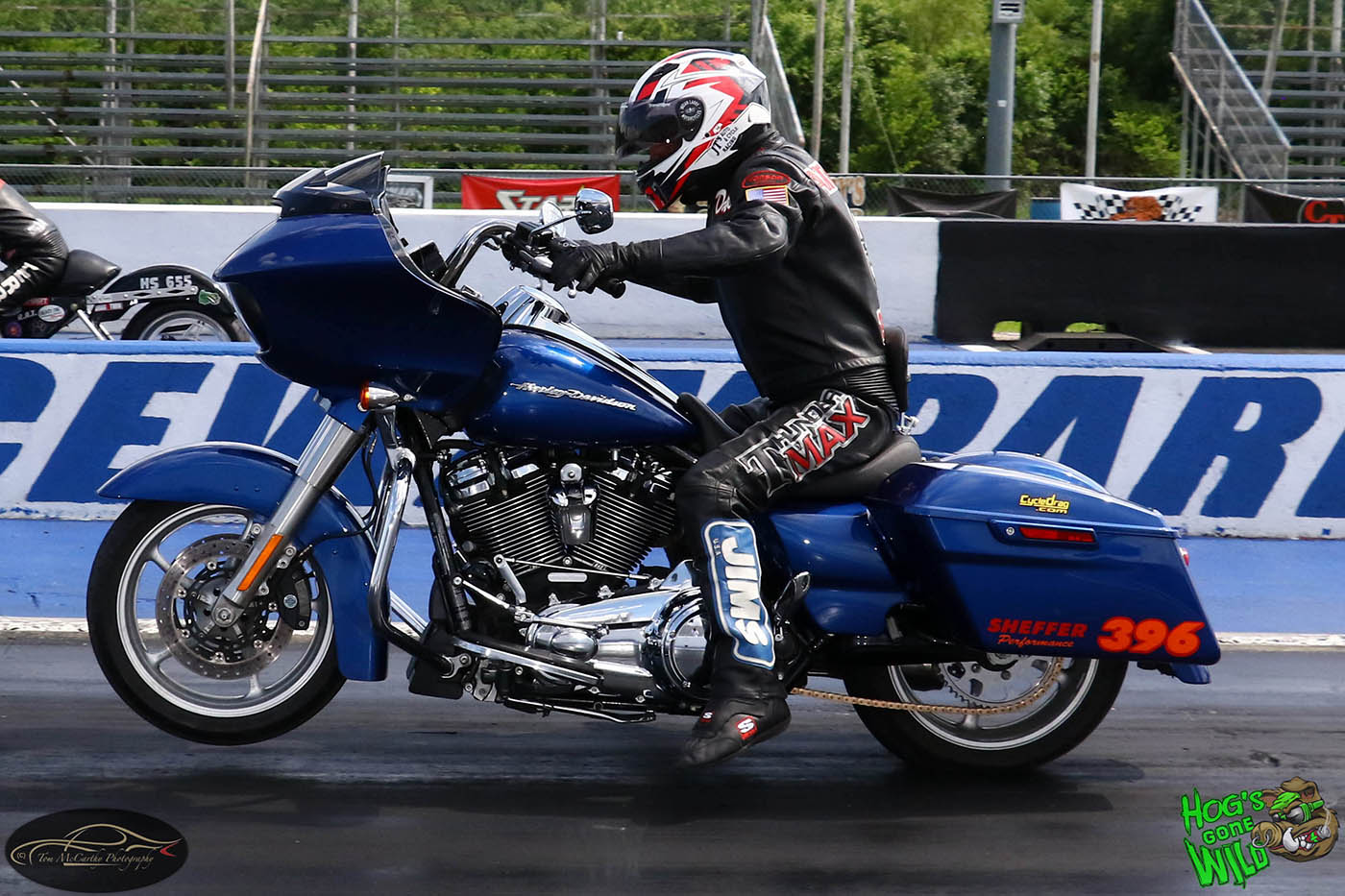 MTC ENGINEERING ET BRACKET CLASS
ET class had the highest count with 34 entries and was a very competitive class. Martin Miller of Oklahoma, outlasted all of his competitors with drag bike pilot Ponto finishing in the runner-up spot. Talking with Martin after his victory at the CT Motorsports Hog’s Gone Wild race, he said he had fought tire spin the entire day but his reaction time of .020 to Ponto’s .035 was the clincher. 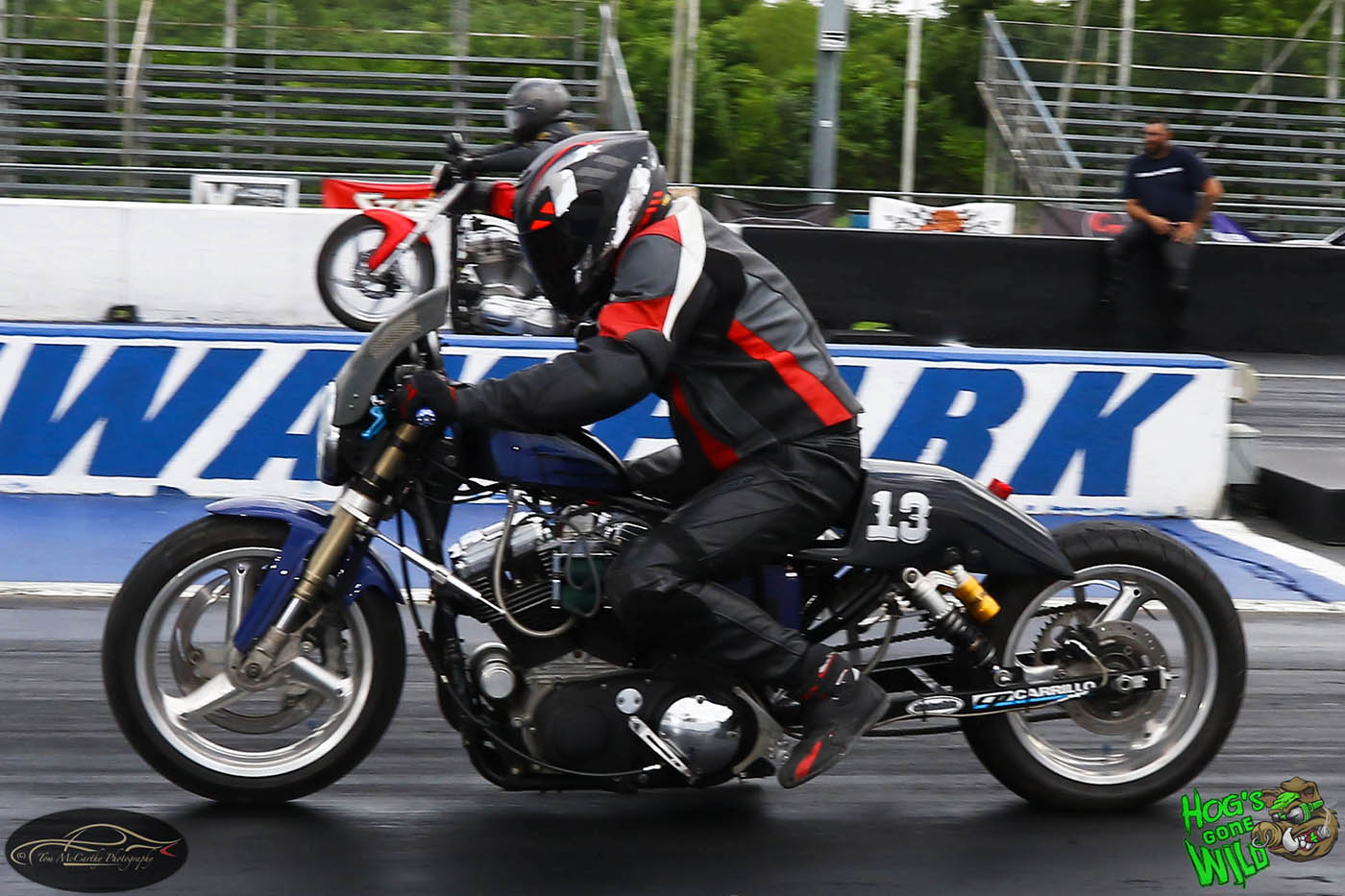 Martin gave all the credit to his Father/Tuner, the Midwest’s well-respected drag bike racer Mr. Jim Miller and a big thanks to Wedman Motorsports for they do. Martin said “If Dad is tuning, I step away and ride the bike.” Martin Miller also did a very noble act after his win and that act deserves being mentioned… Martin took his winnings and split it with his finals competitor Ponto, as well as both semi-finalists, Nathan Power and Larry Sayre. Way to go Martin Miller!

CT Motorsports/Hog’s Gone Wild Harley Davidson Bagger Racing Event would like to thank Todd Martin and Keith Haney of Tulsa Raceway Park for giving us a magnificent racing surface, a wonderful facility to spend a weekend racing at. All of the Tulsa Raceway Park Staff that did an outstanding job. 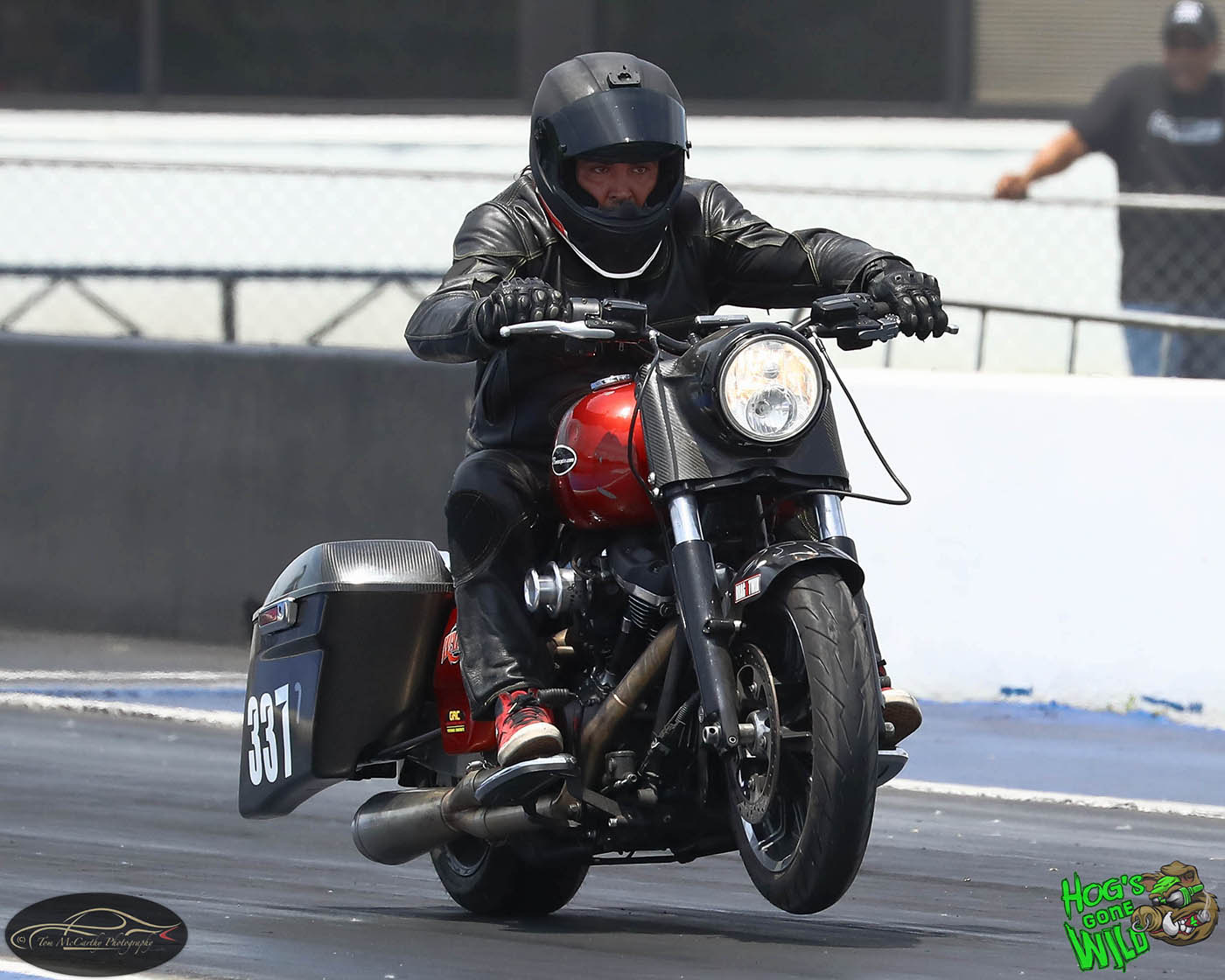 You were all so helpful, friendly and at times went out of your way to be helpful and courteous as well. We think you all deserve a raise for a job well done. HGW would also like to thank its most valuable resource, our Racers, their Families, their Friends and our Fans that travel to each and every event. Thank You All. You are what makes this all worthwhile. 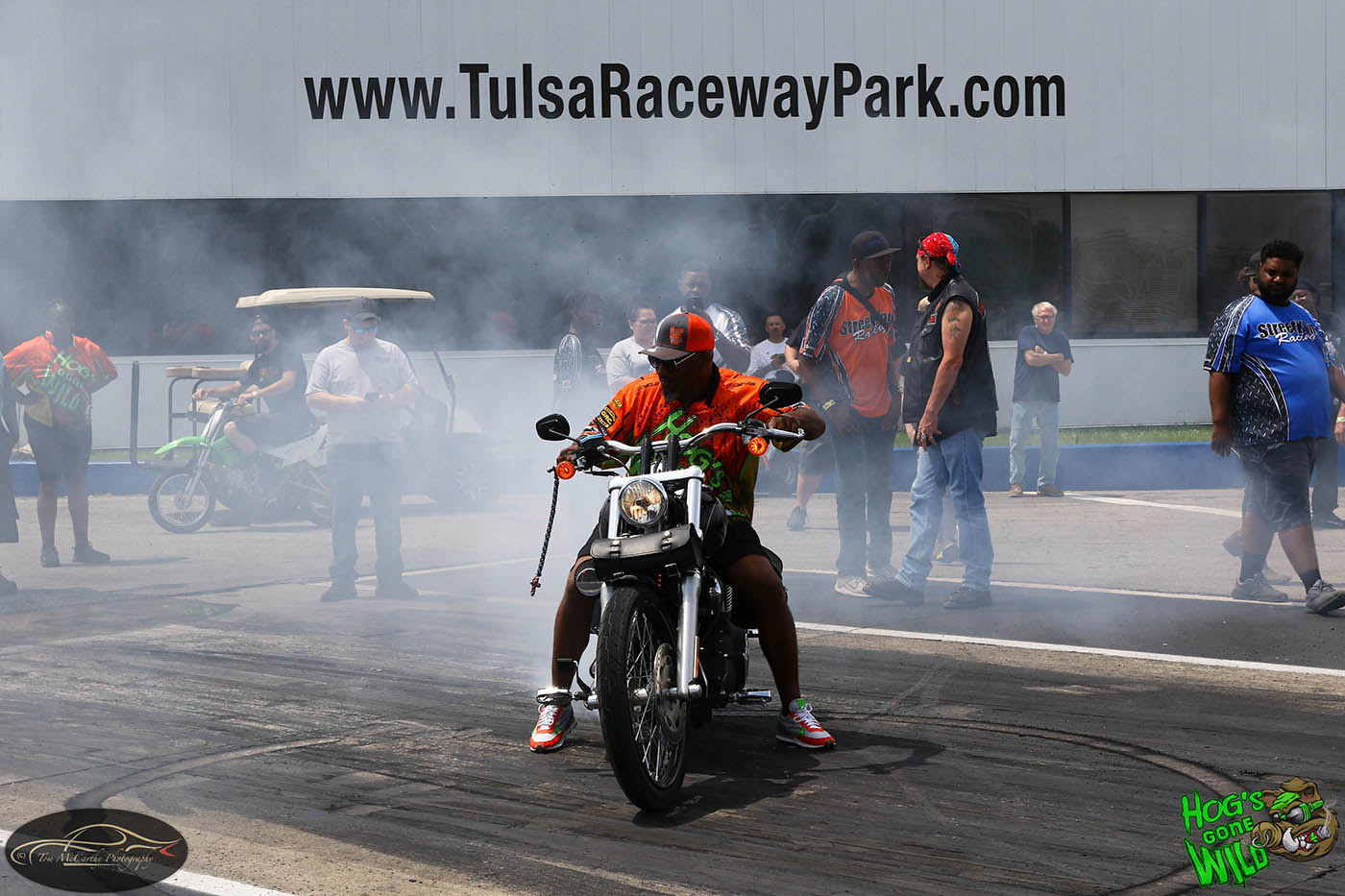 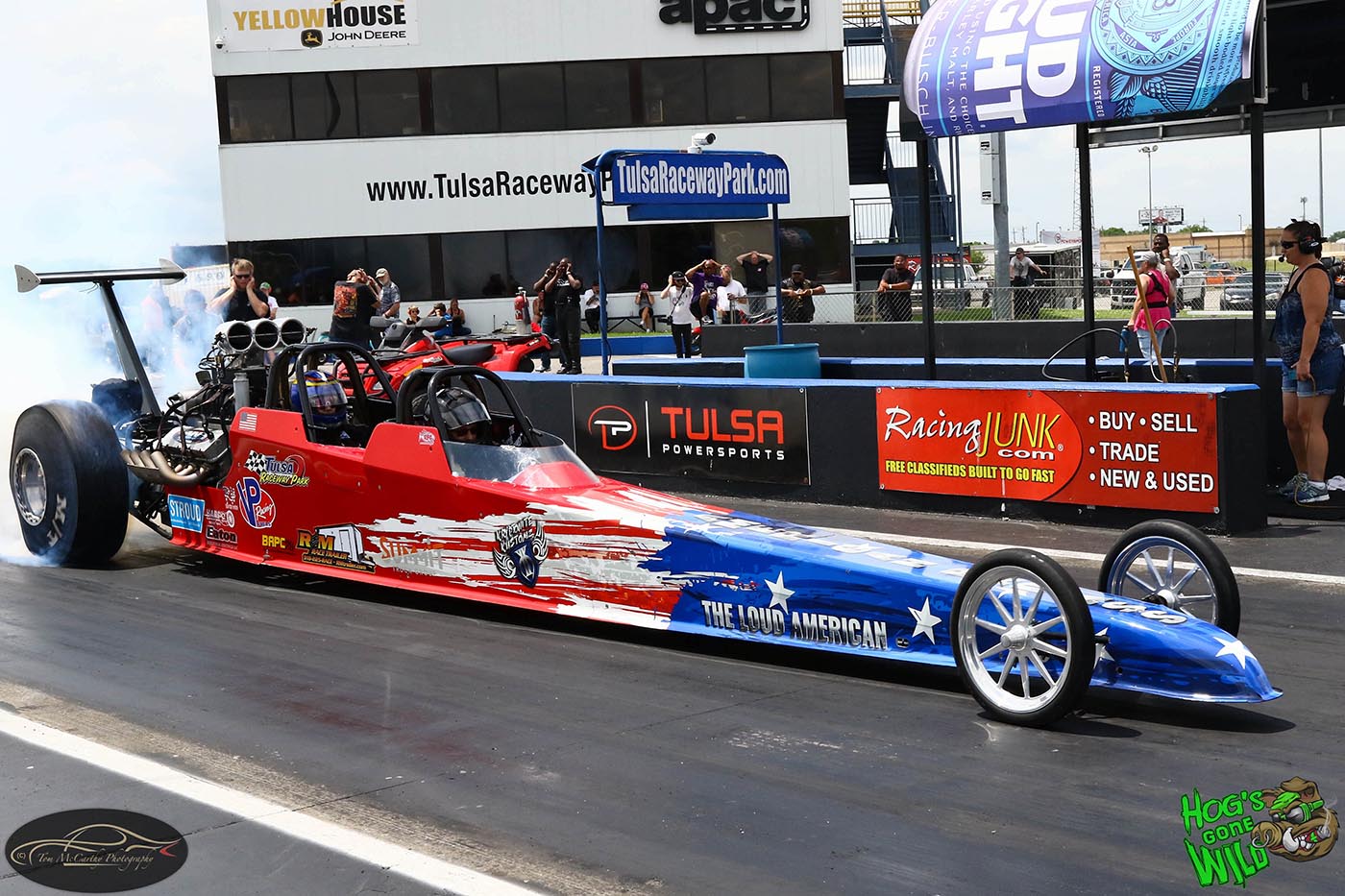 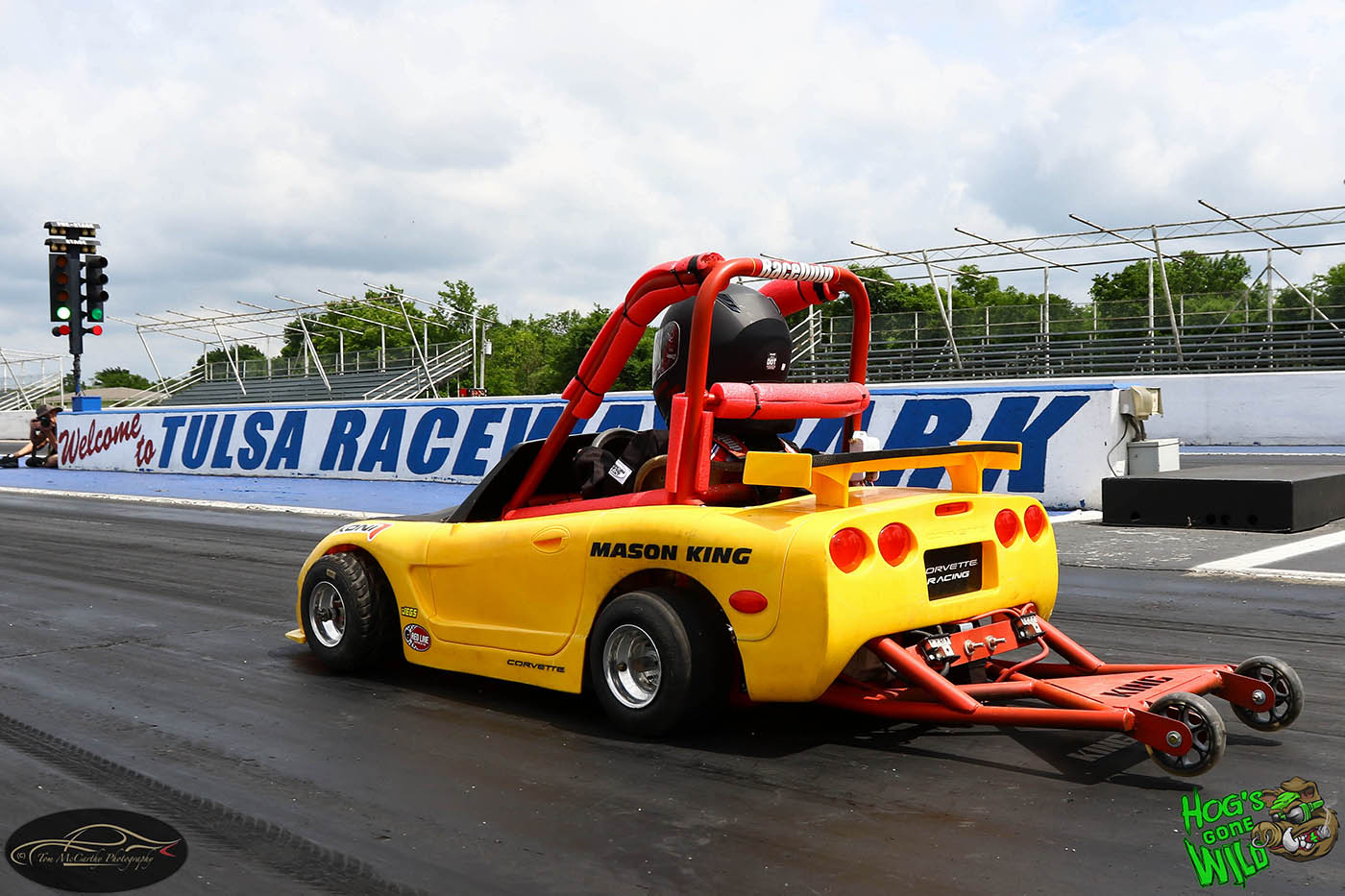 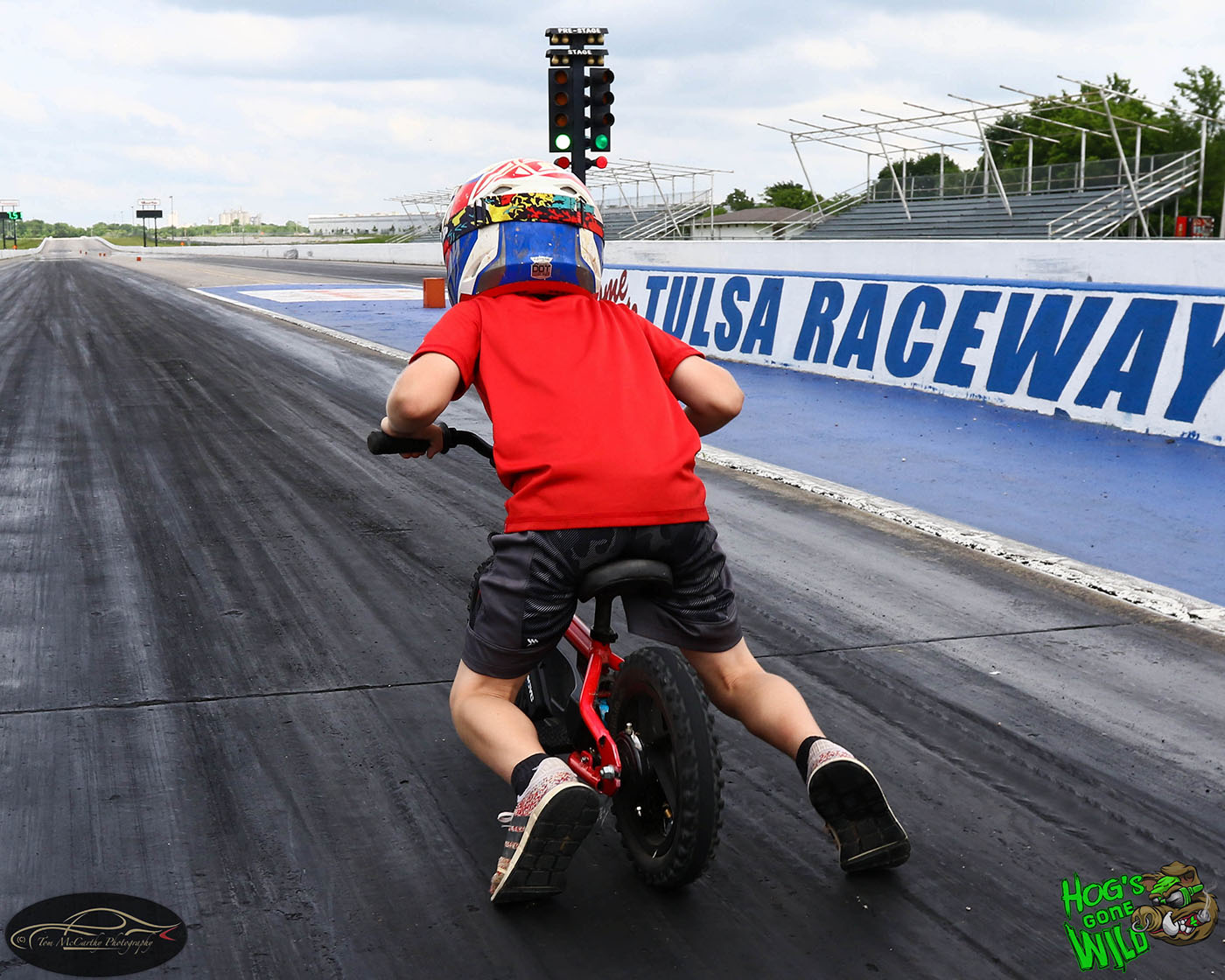 Hogs Gone Wild would like to thank all of their sponsors:

Also, thank you to all of our contingency sponsors:
DME Racing, Star Racing, GRC, Horsepower Inc, and V-Twin Powersports. 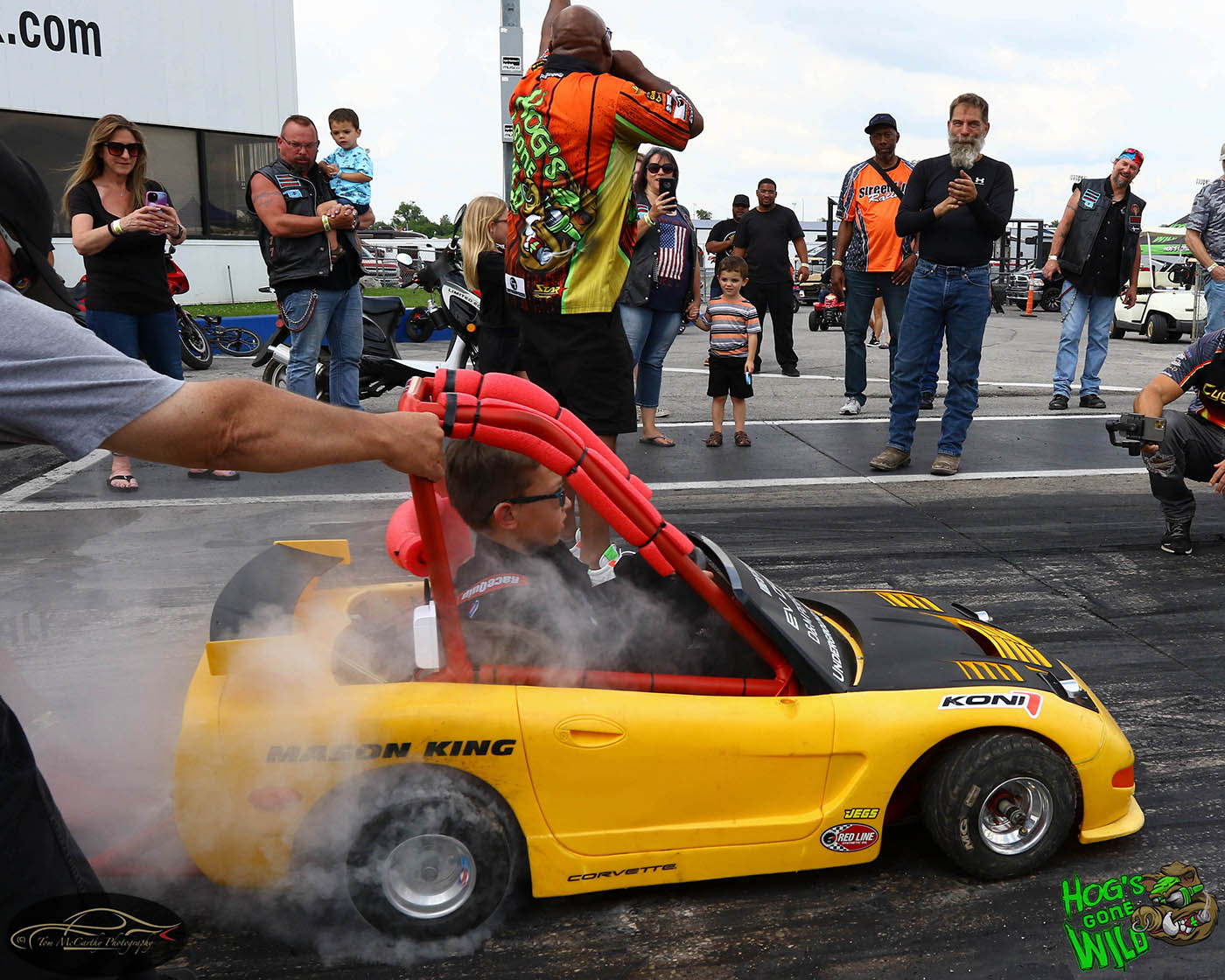 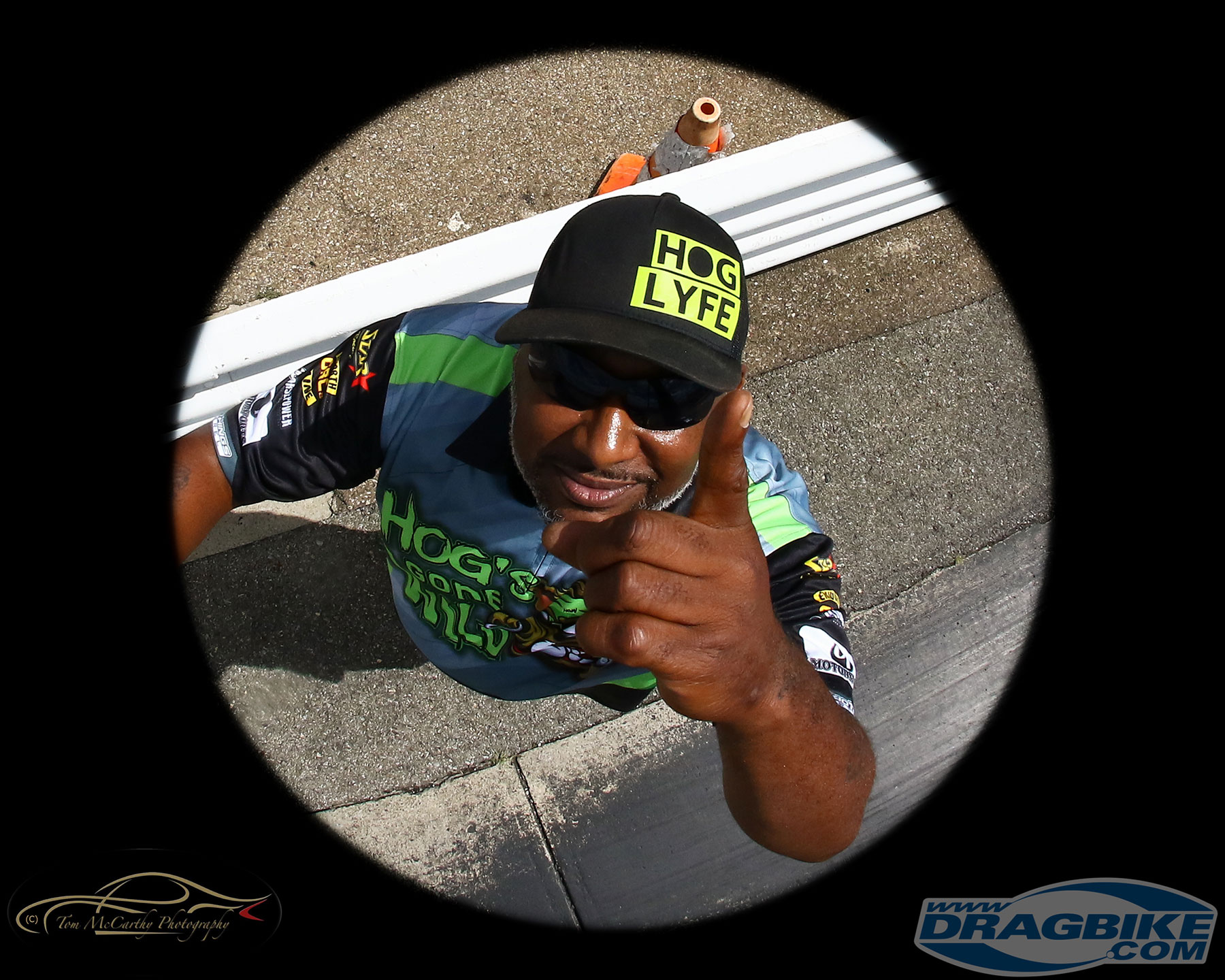