Doug Horne hasn’t won all the races contested this year in the All-Harley Drag Racing Association series. For instance, he didn’t win at Woodburn, Ore. Of course, that might have had something to do with his decision not to make the long, cross country trek from his home in Aberdeen, Md.

No matter. When the AHDRA reconvenes this week at Steve Earwood’s Rockingham Dragway for the 21st annual Screamin’ Eagle Performance Parts Jim McClure Nitro Nationals, Horne will sit atop the standings in both of the featured classes – Top Fuel and Pro Fuel.

The 24-year-old phenom, who won both of those AHDRA titles a year ago, appears virtually certain of repeating this year. Only Tommy Grimes of Pfafftown is anywhere close in Top Fuel. Pro Fuel is even a bigger runaway insomuch as Horne is unbeaten this year – at least whenever he’s decided to show up. 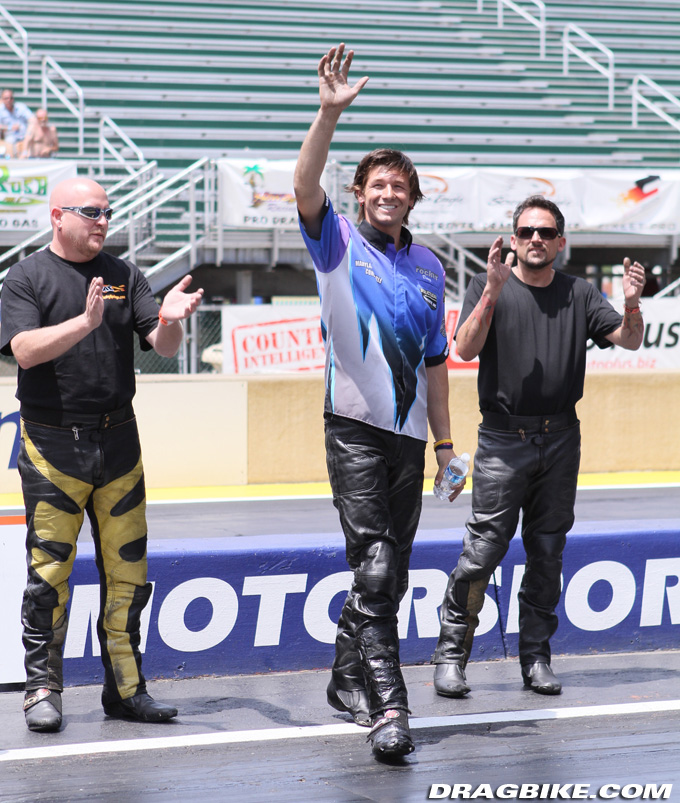 What’re the chances that someone other than Horne will win this weekend at The Rock? Well, consider this: he has won two consecutive Rockingham starts in Top Fuel and an amazing six straight in Pro Fuel.

The last time anyone beat Horne in a Pro Fuel race in the state of North Carolina was 2008 when Piedmont’s Tommy Sloane upset him in the semifinals of the Jim McClure.

That’s not to say everyone else should just stay home. Grimes, particularly, has enjoyed a competitive history with Horne. At the spring race at The Rock, Horne’s margin of victory could not be discerned with the naked eye. In the final, he and Grimes both covered the quarter mile distance in 6.306 seconds at 219 miles per hour.

Horne got the win by a couple thousandths of a second. However, Grimes turned the tables this year in the final at Bristol, Tenn., and former AHDRA and IHRA champion Jay Turner of Julian gave the points leader all he could handle before losing the final last month at Numidia, Pa.

Horne won’t be alone in his bid to sweep the two Rockingham races. Other returning spring winners are Tom Caldwell of Knoxville, Tenn., in Pro Stock, Henry “Hank” Stanton of East Rochester, N.Y., in Pro Modified, Mark Cox of Fleetwood in Pro Drag and Keith Brown of Semora in Pro Gas,

Gates open at 12 noon Friday for a special motorcycle edition of the track’s weekly test-and-tune session. Pro qualifying begins at 12 noon on Saturday and eliminations at 12:30 p.m. on Sunday.

Adult tickets are $30 for either Saturday or Sunday or $50 for two days. Children 11 and under are free with a ticketed adult and admission also is free for active military personnel with valid ID. 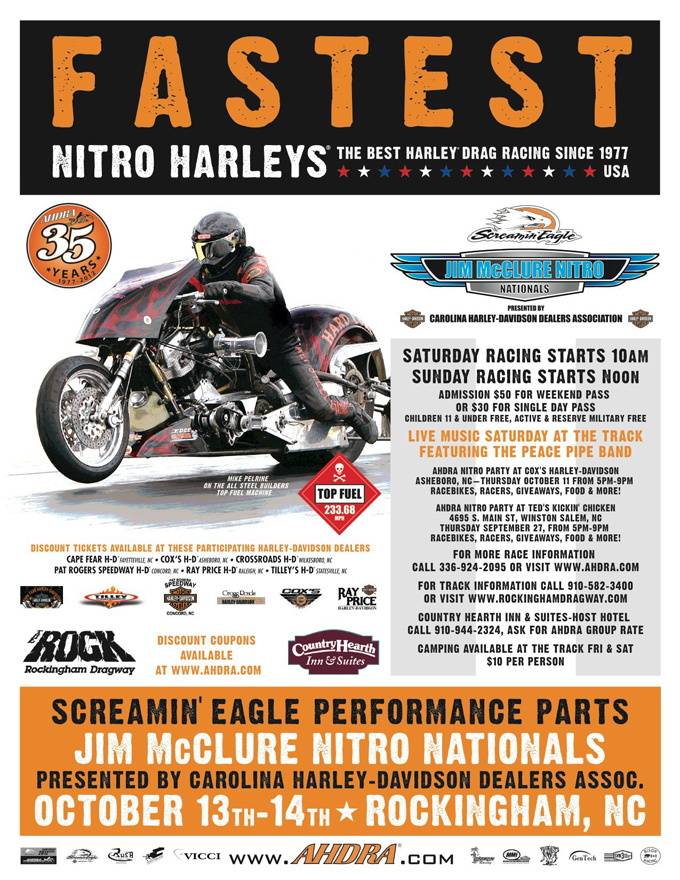 For more information on Rockingham Dragway, please call 910-582-3400 or visit them at www.rockinghamdragway.com.