Home Columns How bad do you want it: Race Life

How bad do you want it: Race Life

There are a lot of people who say they “want” to go racing or they want to be a part of this class or that class, we’ve all heard the stories before. My feeling is we’ll hear them again too, but this begs the question: how badly do you want it? Do you have what it takes to be a real racer, not just some keyboard cowboy wanna-be? Who are you and is your heart bigger than your mouth? Actions, not words, define us, my friends.

I was reminded of this on the morning of Thursday, February 27, 2019, while driving East on I-10, not long after I crossed the Alabama – Florida line. While tooling along on I-10, I spotted off in the distance, a car with a lot of junk-in-the-trunk, clearly overloaded, traveling east at a snail’s pace, compared to the traffic buzzing along at the prescribed 70 MPH. This dude was barely doing 60 and by the attitude of his car, I’d say his rear shock absorbers pretty much left the building with Elvis a long time ago. 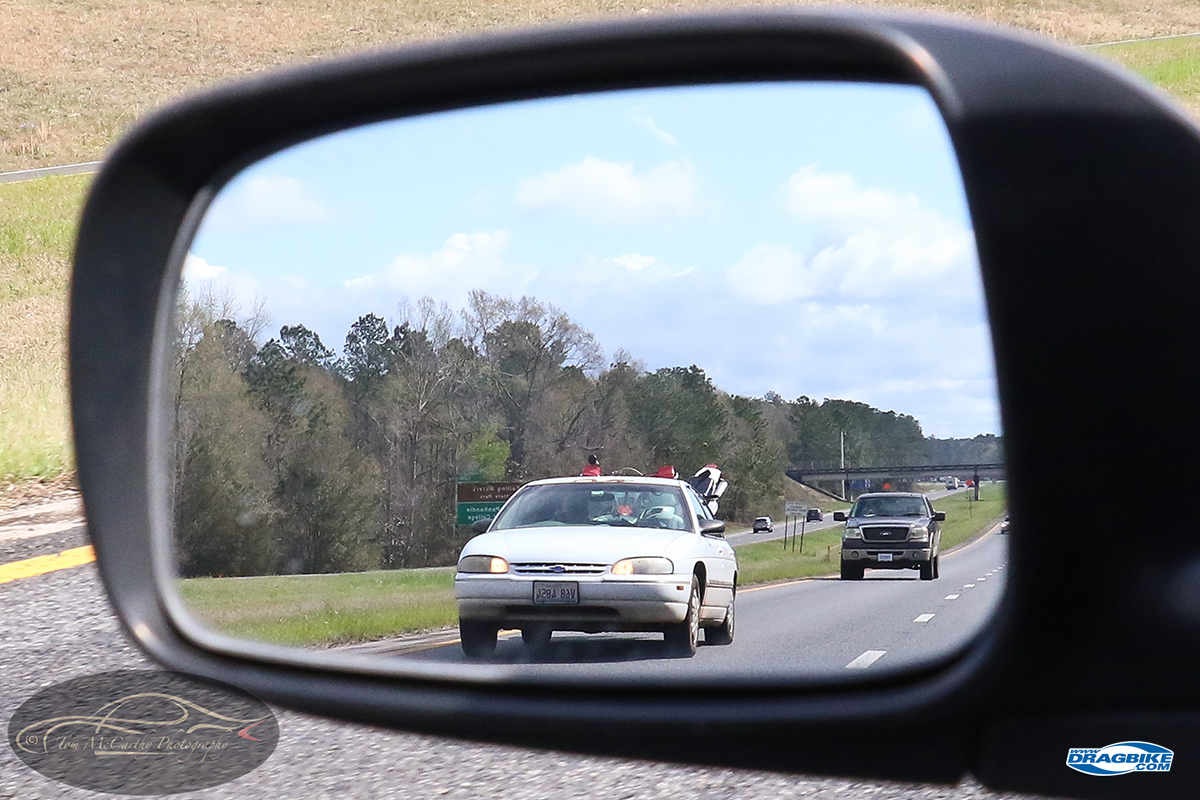 But there was this racer, in all his glory, traveling along I-10, with not one but two motorcycles hanging out of his trunk. The motorcycles were held in by the usual ratchet straps and bungee cords, both front wheels jammed into the trunk space, far as they could go. I noticed right away this man had removed the rear deck lid completely making this thing a traveling bath-tub when the skies open up. But did he care about this? I doubt it. It wouldn’t surprise me a bit if he had drain holes as a standard option when he configured his four-door sedan into a race bike hauler.

My first thought, after the initial shock wore off after seeing this traveling marvel was “Now here’s a guy that wants to go racing!” I accelerated my car, eye-balled all the racing stickers adoring all his rear windows and passed him with a honk of the horn and two thumbs up, making sure he saw me as I did so. As I passed him and saw him come into my rearview mirror, I started applauding, my hands in the air where he could see them, then I added a few fist pumps for good measure. This man is my kind of racer – he’s going to do whatever it takes to get to the next race. And let me assure you, when he gets there he will hold that throttle to the stops and race with everything he’s got. THIS man has what it takes to be a racer! 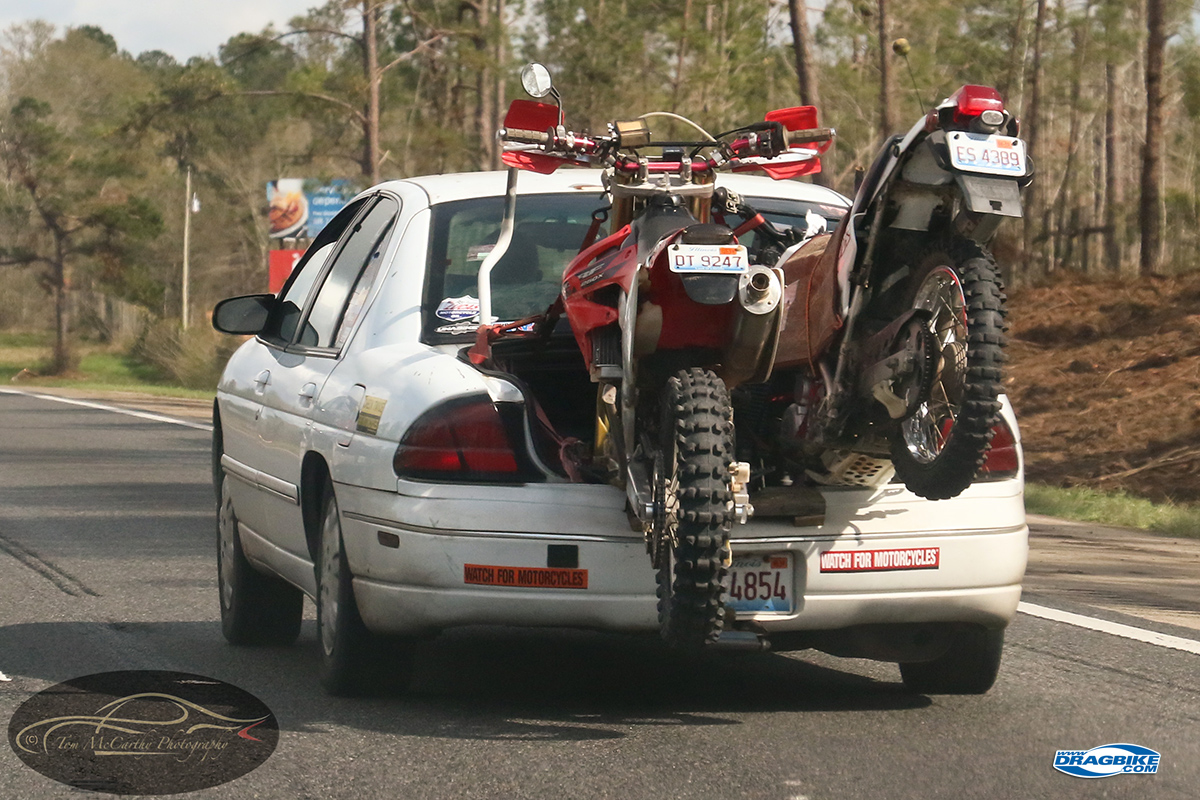 I don’t care that he is not traveling in a stacker with multiple bikes, listening to a Bose sound system, with a Starbucks in the chrome adorned coffee-cup holder. I care that he’s a racer’s racer, giving it his all and I’ll bet you a Pecan Waffle from Waffle House he’s about to unleash hell on his opponents, first chance he gets. Seeing this I was motivated to action and doing the usual dumb stuff I do to get the photos and write the story. Because the readers of Dragbike.com, the racers who frequent the site need to be reminded: racing should about racing, not what you have or what you can accomplish.

How bad do you want it?

After driving down the road a piece and pondering this man’s efforts I started searching for this man in my rearview and he was way back there – somewhere. Then becoming highly motivated and less than smart, I began to clear a few items from my driving cockpit and reached for my camera bag. I pulled over into the breakdown lane and hauled out my camera body and lens of choice. I then watched for him and as he came into view I re-entered the traffic pattern, forcing him to come up past me on my left so I could photograph him in my driver’s side mirror. I wanted to show the world in my photos once again this is what our world of racing is all about – how cool is this? Look at this guy!

As he began to pass me I captured a few photos, then rattled off a few more from different angles so folks could get the full view of what this man did and was willing to do, to go racing. That he was about to go racing dirt bikes, not drag bikes made no difference to me; I can see how badly he wants to do this and how badly he wants it. Actions, not words define us – remember this. 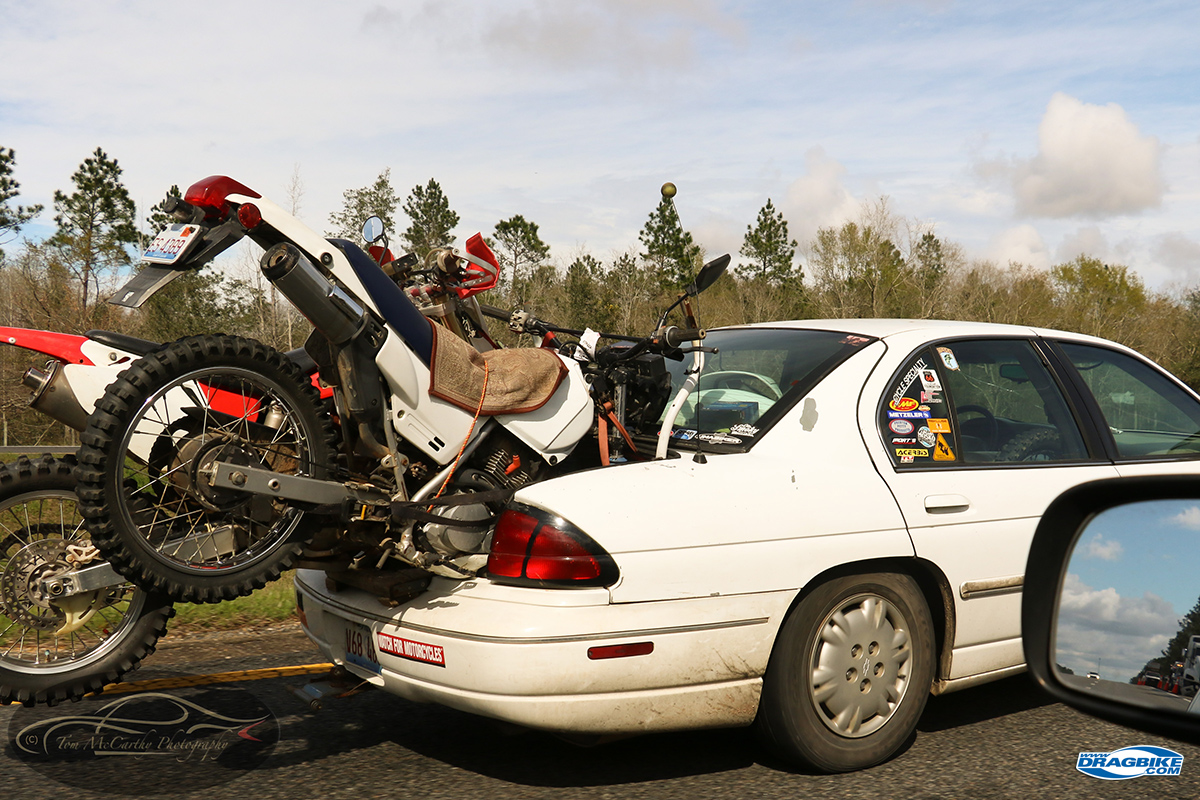 As I passed him one last time, I again gave him a seated ovation and motored on down the road. I noticed his mutton-chops and long hair as I passed. I wonder if he had “In a Gadda Da Vida” by Iron Butterfly booming from his 8-track of maybe Foghat? No matter; what he really wanted was the sound of BRAPPPP, a checkered flag, and a podium finish. Why? Because that’s what racers do, this is what they live for – to go racing, to get to the next race.

Don’t get me wrong, I’m grateful that modern-day racing has risen to the levels it has in 2019. 18 wheelers in the pit areas, large RV’s with all the amenities of home inside, yes that’s all good stuff and the professional appearance necessary to attract sponsors and their dollars. 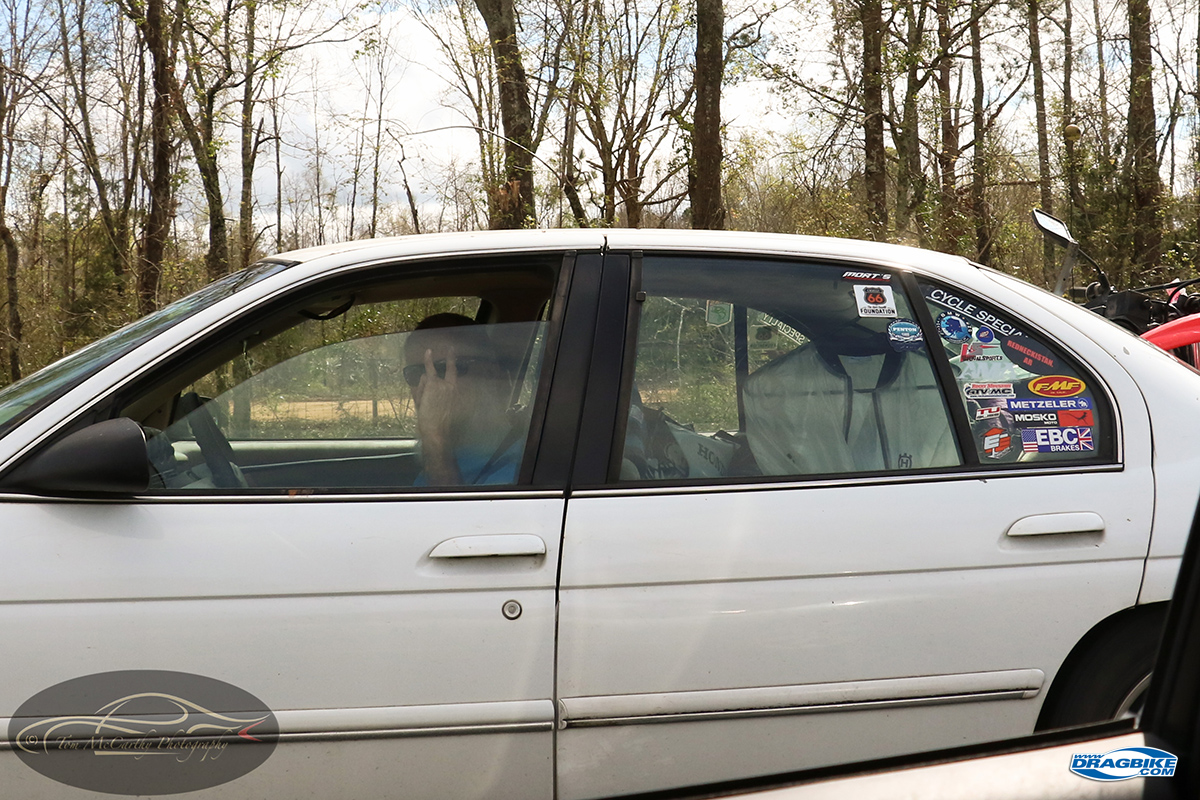 But remember this: it’s not about the size of the dog in the fight, it’s about the size of the fight in the dog. Racing, at its best: is about heart. How bad do you want it? DON’T tell me or half the world about it on social media – show me, out on the race track, out on I-10 or out on I-95 out of Boston – show and prove: actions, not words define us. How bad do you want it?