Ian King : Gulf Oil Drag Racing to the US

Gulf Oil Drag Racing to the US

The Gulf Oil Dragracing team are pleased to announce that they are to compete in the 2017 USA National Dragbike Championship. Following a collaboration proposal from California based John and Dea Morgan Racing alongside additional support from long time dragbike racing benefactor Joe Koenig of Trim Tex and a number of individual supporters the team were able to commit to compete in all five rounds of the Manufacturers Cup series.

2016 was a momentous year for the Gulf Oil Drag Racing team. Another record setting 10th FIM European Championship was won, and in doing so Team Principal and rider Ian King became the most successful rider in European drag bike racing history by accumulating more championship points of any rider in any class over the two decades since he began competing in the championship. At the end of the season he diversified his sporting focus by using the very same championship winning machine for a successful attempt to set a new FIM World Land Speed Record on a track and in conditions totally at odds with the environment in which he had been so successful over his ten European drag racing championships. 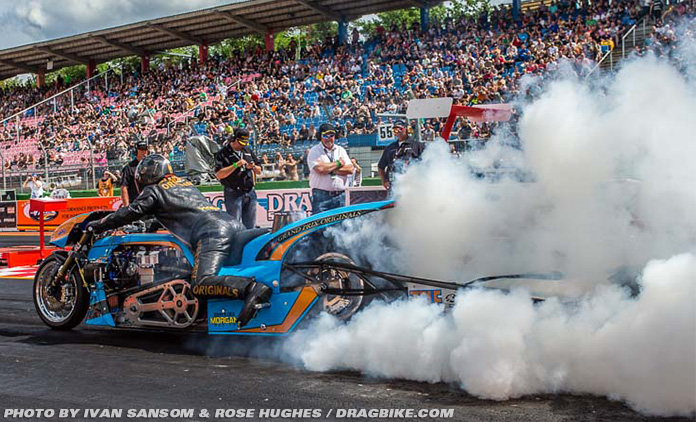 Following his successful one off race in the 2014 USA National Championship opening round where he not only won the event but became the final and permanent member of the prestigious MTC Top Fuel 5 Second Club, invitations to race the entire USA National Championship by the organizers and the hopes and desires of his many fans across the globe were compelling and so he and his team have been working on a program to see if Ian could become the first European rider to do so since the late Brian Johnson more than three decades ago.

Following the decision to ship his operation to the US Ian said:

“We are so much looking forward to this, we have such good friends in our class, fans across the world and awesome sponsors that we owe it to them to take part in an all new challenge. We would like to thank Gulf Oil, John and Deanna Morgan, Joe Koenig, Dave Vantine, Ivan Sansom & Rose Hughes, Mark Rendeluk, Ed Kelly, Scott Perri Roethemeier, John Stein, Frank Moya, the Maddox family, Sam Green, Neil Baskerville, Tamre Martin and Jay Regan & Dave Schnitz of MFC alongside our fantastic technical partners who have stepped up far and beyond the call of duty to make it happen”.

The Gulf Oil  Dragracing team uses and endorses exclusively Gulf Oil greases and lubricants in their history making machine.  The team is extremely proud to be supported by many leaders in their chosen markets in their participation in the 2017 USA National Championship: