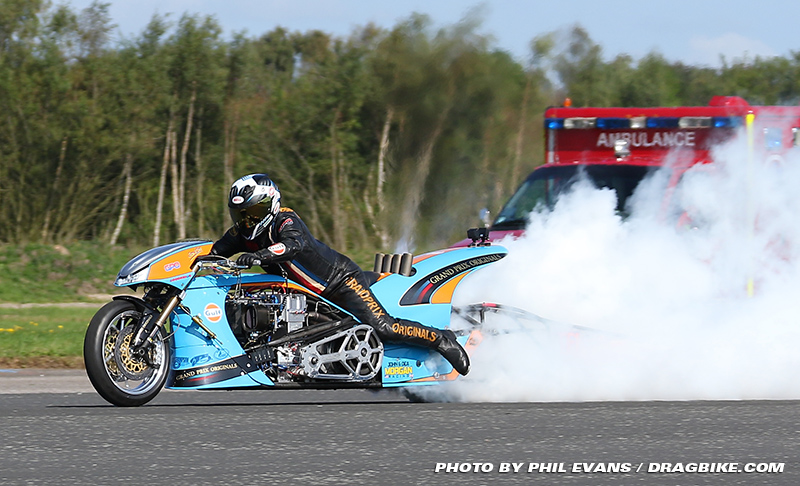 Kimberly Davey Schijven became the first woman rider to complete a kilometre wheelie. Kimberly, from Holland, was so close at the August Wheelie weekend and finally put together a string of successful attempts ending with a best of 153mph. 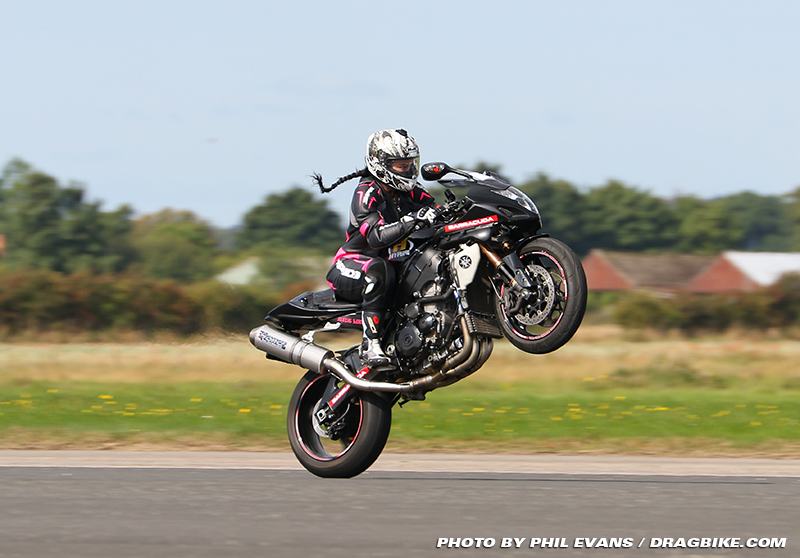 The ‘Gulf Oil Top Fuel Dragbike’ is said to be one of the fastest accelerating motorbikes in the world Ian describes as the “fastest motorcycle outside of the USA from a standing start.” Speaking bout it Ian also says it will out accelerate most vehicles from a standing start including all Formula One cars and even Thrust SSC and F15 Jet Fighter planes. The ‘Gulf Oil Top Fuel Dragbike’ is approximately 50% more powerful than a Formula One Car.

Also in action over the weekend are ‘funny vehicles going for world speed records’. 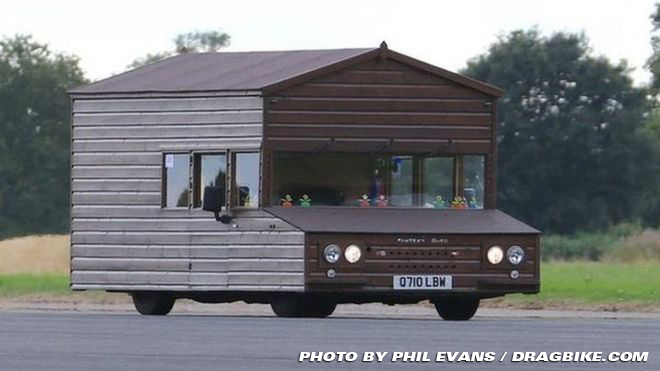 These are in addition to a range of conventional high powered bikes and other four wheel vehicles going for UK and world records.

Straightliners is affiliated to the Auto-Cycle Union (ACU) and the International Organisation of Professional Drivers (IOPD). Rider participation including record ratification and timing is administered by to UK Timing Association (UKTA). Both Straightliners and UKTA were set up by renowned motorcycle racer Trevor Duckworth. Hard to talk about audience numbers as it depends on the weather.

Ian has won a total of nine FIM European Championships with an unprecedented four back – to – back titles, two ACU British Championships, one MCUI Irish, has broken various official European and UK records and currently holds a number of track records across Europe. He is the only British rider to have run a standing start quarter mile in five seconds and is one of only eight members across the World in the prestigious MTC Engineering Top Fuel 5 Second Club.

He built his first custom motorcycle at the age of 13 and was originally a renowned and multi award winning constructor of custom road bikes. He was introduced to dragracing whilst on a day trip with the Boy Scouts to Santa Pod, UK.

Following further trips to the UK track from the age of 17 on his road bikes to race his friends at `Run What You Brung’ weekends Ian began his race career in the SuperBike conceived Ultimate Streetbike series in the 1980’s on his own custom turbocharged road legal specials.

In 1990 he won the prestigious Dolphin Trophy at the world’s oldest running motorsport race, the Brighton Speed Trials as the quickest motorcycle over the standing start half mile seafront course. 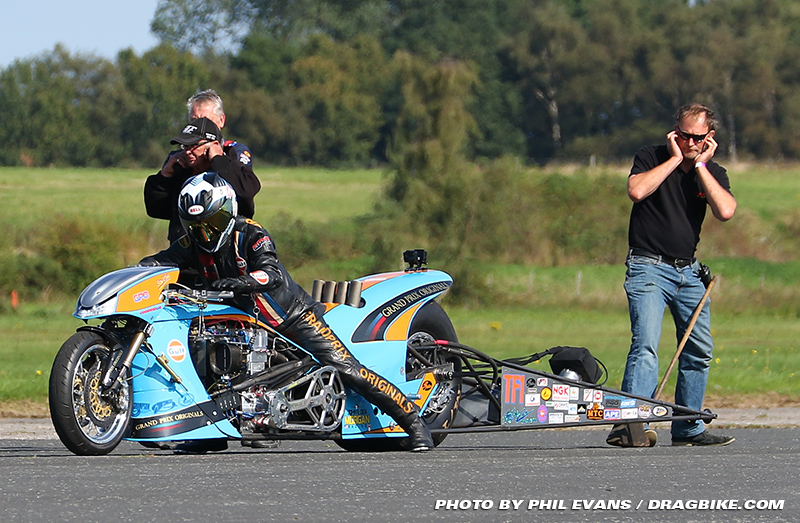 In 1994 on a variety of borrowed street based turbocharged machines Ian won the Motor Cycle Union of Ireland (MCUI) Dragbike Championship despite competition in the form of full race machines with slick tyres and wheeliebars.

From the street classes he progressed through to the full competition Funnybike class in the UK’s Auto Cycle Union (ACU) competition on a self built turbo Methanol Suzuki before acquiring his first nitro project, a 2700cc V8 Nitro injected Puma Top Fuel Bike in 1997.  However, just before the unique project was completed Ian received an offer he could not refuse for the unfinished machine from entrepreneur Ron Holland and used the funds to acquire the `Quarter Scorcher 5’ Puma from Phil and Frank Brachtvogel in 1999.

In 2006 Ian became the first racer on a Nitromethane powered dragbike to make a run in the Middle East at the Bahrain F1 circuit.

In 2010 and after many updates and improvements to the bike and control systems to dramatically improve its performance over a decade into a state of the art machine, King sold his multi-championship winning machine and conceived an all new world leading bike under the auspices of his company Puma Engineering and in conjunction with Gulf Oil International.

In December 2011 Ian became the first racer on a Nitromethane powered dragbike to make a run in India at an event in Mumbai arranged by Gulf Oil India and covered by a wide variety of TV stations and Press companies across the world.

In 2012 the Gulf Oil Dragracing Top Fuel Bike team won the prestigious FIM European Championship and subsequently won it in each of the succeeding four years to date.

In July the Gulf Oil Dragracing team were personally invited by Lord March to his superlative `Goodwood Festival of Speed’ event in front of record crowds of around 150,000 each of the three days where it drew large numbers of amazed visitors to its pit area, for warm ups on nitromethane and whilst on its way to the holding area prior to the demonstration runs `Up the Hill’. It culminated in being honoured with the Goodwood Choice Award, selected by a group of judges including Lord and Lady March as the most spectacular vehicle of the event, with legendary F1 and motorsport commentator Murray Walker describing Ian as the `hero of the moment’ and stating `I take my hat off to him’. Subsequently the team have been invited back annually to participate in this unique event. 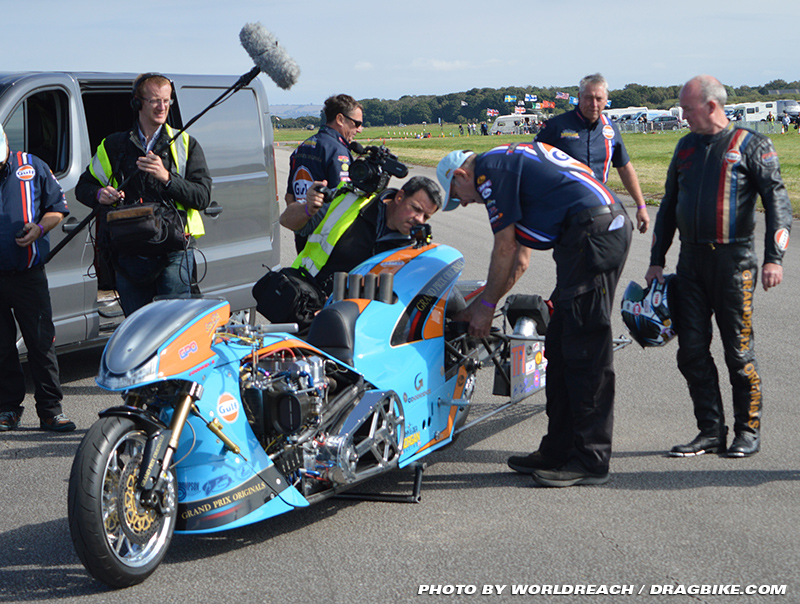 In March 2014 Ian ran in the opening round of the USA Championship, winning the event and in the final recorded a time of 5.878 seconds to become the 8th and final member of the prestigious MTC Top Fuel 5 Second Club.

In February 2015 Ian participated in the GQ India Magazine Gentleman’s Ride for India’s children in Goa on a custom Royal Enfield, proceeds of which were donated to Magic Bus India.

Ian has been the subject of a great number of magazine and newspaper articles, globally syndicated television documentaries as well as being employed as an expert consultant on a number of television programmes, the most recent being an episode of `Speed’ featuring Road Racer Guy Martin who was instructed by Ian in the art of riding a Dragbike and where he supplied and gave guidance in the use of a parachute system for Guy’s record breaking down hill toboggan.

Ian’s current machine is the most technologically advanced machine of its type in the world:

It will out accelerate most vehicles from a standing start including all Formula One cars and even Thrust SSC and F15 Jet Fighter planes and is approximately 50% more powerful than a Formula One Car.

Ian is a qualified FIM International Technical Steward and serves on the Road Race committee of the ACU (British) motorcycle sanctioning body.

Ian studied Electronics at College before entering the Chemical Industry. Currently he is Business Development Manager for Motorcycles at Suzuki, the iconic motorcycle manufacturer and one of the world’s leading automotive manufacturers.

He is married to Debbie with whom he has been a partner since he was 17 years old and at school together. They have two daughters, Georgina who is 20 years old and studying Law at University and Alexandra who is currently studying for her `A’ levels with plans to study Veterinary Science at University. They own a dog, a miniature Schnauzer suitably called Nitro.

As well as offering its heavy duty Pro1 cases as replacements for the Suzuki GS/GSX engines, Puma has been developing engines and turnkey concepts for the so called `New Age’ Funnybikes to overcome the engine and gearbox problems associated with running a mid 6 second Funnybike using OEM design engine cases. Powered by inline 4 engines utilising normally aspirated nitromethane injected, supercharged / turbocharged petrol or alcohol and nitrous oxide injected combinations on a pseudo Top Fuel Bike transmission layout, these combinations permit engine setups in excess of 1000HP to be utilised if desired that could not be reliably achieved with the traditional Funnybike combinations. Available for all OEM motorcycle cylinder head stud spacing’s, crankshafts up to 95mm stroke are offered resulting in capacities of up to 2500cc.

To date, well over 100 Puma engines have been built for Top Fuel and Funnybike applications. Puma powered motorcycles have broken numerous US, European, Australian and World records over the years, and have propelled many riders to championship titles, many more than any other engine in Top Fuel Dragbike history. With power outputs of between over 1000 and 1500 HP / PS and under 1600cc, Puma engined bikes are used in the current US, European and British Championship winning bikes, and hold the accolade of propelling Korry Hogan to the fastest (250.97 mph) run in history on a mechanically driven motorcycle on a quarter mile from a standing start.

For more information on the team go to www.gulfoildragracing.com