In its fifth year, the International Drag Bike League’s “Paint the 1/4 Pink” program raised over $7,000 to support those who have suffered from cancer.

“Paint the 1/4 Pink” was part of the IDBL’s Bike Fest on July 28-30. On Tuesday, IDBL President Jack Korpela, IDBL racer Del Flores and Shelia Green-Barnhill, CEO of Bikers Against Breast Cancer, Inc., presented a check to Elaine Hilton, one of the organization’s applicants, at a formal ceremony at the Motorcycle Mall at Belleville, N.J.

“It’s really gratifying to be able to do something so meaningful for those going through a struggle,” Korpela said. “The motorcycle community is a real tight-knit group that is passionate about what they do. Helping others in need is something this group has rallied around.”

Green-Barnhill added, “It’s so critical for us with the amount of money they raise. Right now, we have over 100 people on the waiting list needing help. Each applicant that we serve, receives $300. With $7,000 raised, we can serve 23 people, which doesn’t sound like a lot of people. But with that continued effort, the waiting list moves on a regular basis.”

“We need the research, but there is also a need to help those people struggling financially,” Green-Barnhill said. “The hardships from that disease comes up and it’s rare to find organizations which will help. We’re now a national organization which has served applicants as far away as Alaska and Hawaii.”

There are other fundraisers within the motorcycle community, but as Green-Barnhill stated, the IDBL’s “Paint The 1/4 Pink” ranks as one of the largest of the year. It’s a case where those giving are truly as blessed as those who receive the funding. 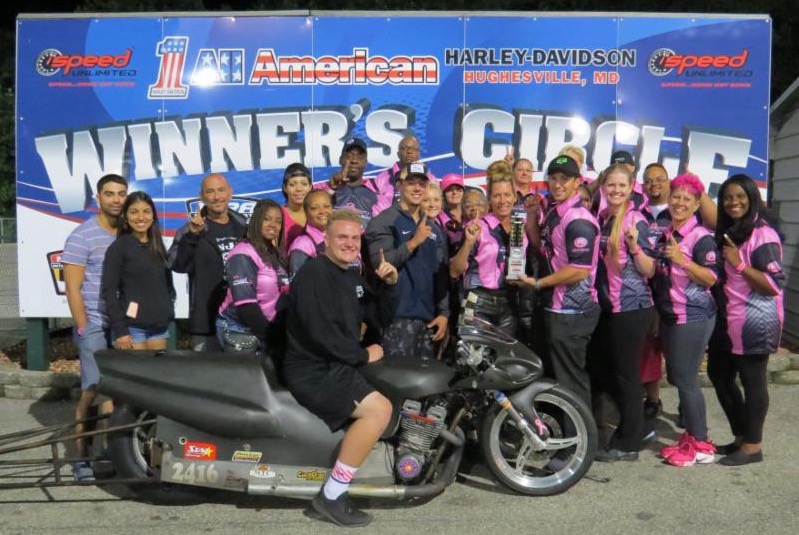 “We all know somebody who has been devastated by cancer. It means a lot of me to meet the individuals who benefit from this much-needed money. I know it means a lot to them,” Korpela said. “I would like to thank everyone involved in this great program. Special thanks to Eric Hochstetler at Portable Shade for making such great-looking shirts, Kelly Clontz for organizing the shirt sale and everyone at Maryland International Raceway for hosting the event.”

Bikers Against Breast Cancer will be back at Maryland International Raceway at the DME Racing Fall Nationals on Oct. 6-8.

For others who would like to contribute to the cause, you may go to FirstGiving.com and click on the Bikers Against Breast Cancer link.