The Mickey Thompson International Drag Bike League (IDBL) is poised to do something it has never done before when it hosts an exhilarating, ground-pounding Top Fuel Import and Harley Shootout at the tour’s marquee event,  the WPGC Bike Fest from Maryland International Raceway (MDIR), July 29-31. IDBL president Jack Korpela announced this one-of-a-kind, can’t-miss celebration of motorcycle drag racing will be dedicated to one of the sport’s most famous and respected racers, Top Fuel legend Elmer Trett, who passed away in an on-track accident in September of 1996. 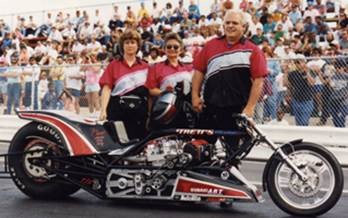 “Anyone who races or is a fan of nitro-burning motorcycles owes a great deal to Elmer Trett. He was a trend-setting mechanical genius and his legacy can still be felt on the sport today. He was dragbike racing’s Don Garlits,” Korpela said. “It has been 20 years since Elmer’s untimely passing and I can’t think of a better way to pay homage to man who dedicated his life to Top Fuel Motorcycles than dedicating this special, unforgettable race to him.” 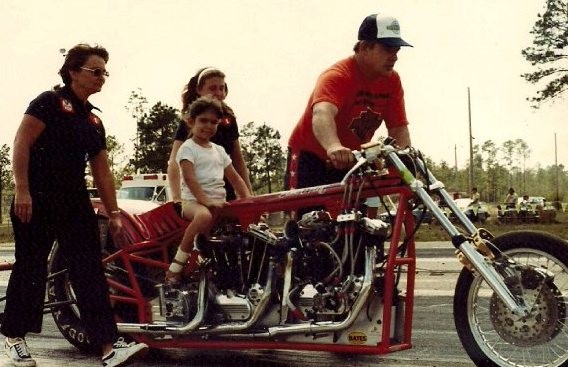 During Trett’s career, his incredible home-built dragbikes reset, often shattering, the world elapsed-time and speed records more than 15 times, including his legendary, long-standing record blast of 6.06 at the 1996 Prostar Pingel Thunder Nationals.  It’s a number that still has Trett ranked in the Top 15 on the list of the quickest drag bike racers of all-time. Trett was also the first man over 200, 210, 220, and 230 mph.

“Elmer loved both Nitro Harleys and inline four-cylinder machines. It’s that same premise that has the Mickey Thompson IDBL getting the different makes together for what will be one of the greatest shows in drag bike racing history,” Korpela said. “Larry McBride will tell you Elmer was actually the first in the fives (McBride officially accomplished the feat in 1999). That’s how important and influential he was. McBride will not make a run if he is not wearing an Elmer Trett T-shirt.” 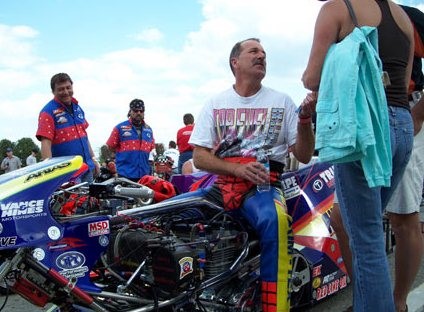 “Elmer was everything to me.  He was my mentor and best friend. If it weren’t for him I wouldn’t be racing. Where I’m at today is because of Elmer,” McBride said. “We used to tour the country match racing.  I never had the money back then to race, Elmer footed the bill for me and I paid him as I won.  He was so far ahead of everybody; he had five-second power in 1996,” McBride continued. “I think about him every race, every lap. I’d give everything up, all the records, all the championships, just to be able to call him up on the phone and talk for three hours like we used to.” 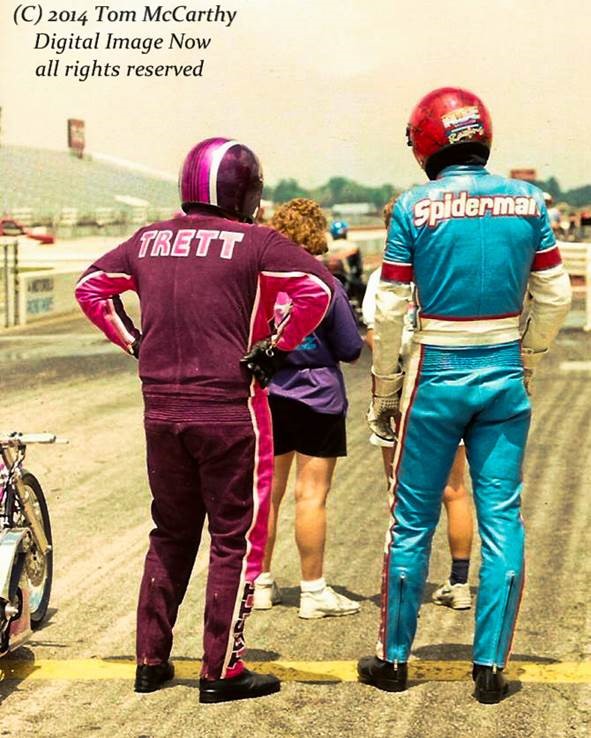 Two seasons ago McBride and match race partner, Dave Vantine made history by running the sport’s first and only side-by-side five second run on the world-famous, top-notch, MDIR racing surface.

“I think Elmer would have been so proud of these two talented racers,” Korpela said. “I think he would be proud of how far his Top Fuel Motorcycle Harley and Import successors have come in the past 20 years.”

Top Fuel Racer Chris Hand shared McBride’s love for the legend saying, “Elmer and Gina (Trett’s, daughter) tuned my bike to its first ever six over the telephone.  To me he was a friend, brother, father figure, and above all a hero.  We would not be running today if it weren’t for him.  He kept me going when there was absolutely no money in it.   They say it’s better to live a single day as a lion than a lifetime as a lamb.  Elmer spent 53 years as a lion.” 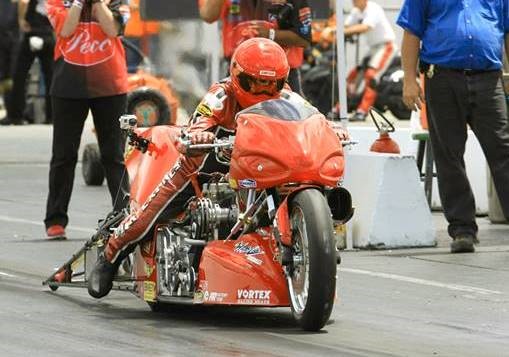 Trett will be honored during opening ceremonies of the IDBL WPGC Bike Fest on July 31.

“Trett’s legacy will live on forever. Bring your Elmer photos, stories and memories to the IDBL Bike Fest and we will celebrate the life of a true legend of the sport,” Korpela said. “It will be a great show dedicated to a great man.” 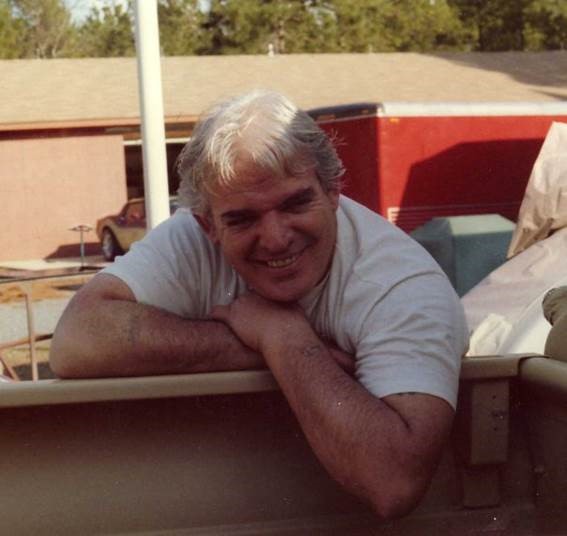