Plagues of rain and fire—along with hordes of high-horsepower motorcycles yearning to be freed—could not deter the Mickey Thompson Tires International Drag Bike League from completing the 46th annual Orient Express Motorcycle U.S. Nationals at New Jersey’s historic and bike-friendly Atco Dragway on September 11-13. Combine two nights of racing ‘til 1:00 am with Atco’s party atmosphere and East Coast attitude, and you have an event that none will ever forget.

But the one thing that this year’s Orient Express Motorcycle U.S. Nationals will always be remembered for is what is likely the last competitive pass of the world’s most famous dragbike. Larry “Spiderman” McBride’s multi-time Top Fuel champion, blue, Pingel-sponsored Top Fuel Motorcycle was pretty well destroyed in a huge finishline explosion. 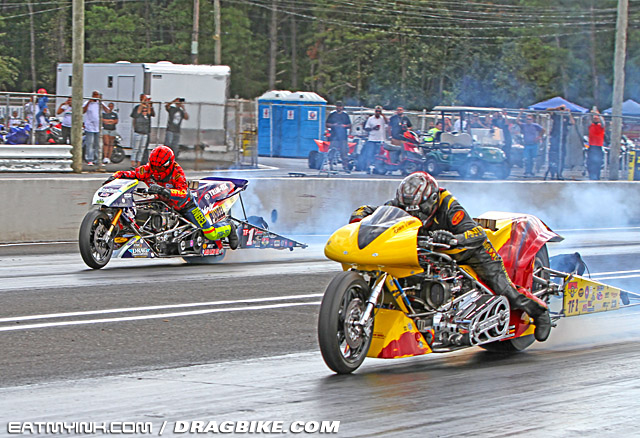 It was at the end of a peddlefest match race with David Vantine that saw both riders in and out of the throttle, boiling their tires for Atco’s full quarter mile. A bright flash erupted through the tire smoke right at the finishline in McBride’s lane. But it wasn’t just a flash—it was a full-on fire. The beloved bike—the first in the 5s and a continuous record-breaker ever since—was now a rolling blaze of oil and nitromethane. Despite laying atop an explosion that bent and ripped the bike’s massive top frame tube clean through, and now straddling an inferno that was burning his legs, Larry deftly brought the bike to a safe stop next to the ambulance.

“He came past me with everything on fire,” said Vantine, who stopped his own bike with plenty of room for the ambulance to get to Larry. “He was jumping around quite a bit. He was pretty hot.” Hamilton, New York’s Vantine and his Pollard Nitrosports bike were awarded the match race victory for the weekend.

“The Atco crew did a good job of getting the fire out quickly,” said IDBL President/Promoter Jason Miller. But the bike is toast. Below the broken frame tube lies a motor as comprehensively destroyed as any you can image. Completely severed at its base, the block and head leaned back at a 45-degree angle to the rear. The blower was at a similar angle towards the front. Below it was the crank and asphalt, around it was blistered and burnt bodywork. “The crank looks OK,” said Steve McBride in a state of shock—in tears for both his injured brother and the machine that has been their lives.

Crewman Roland Stuart crouched beside the bike, his mind calculating a to-do list as he stared into the flayed-open belly of the beast, burnt from tip to tail. “That bike will never go down a race track again,” said Steve.

Larry, in the meantime, was in the ambulance, sending someone back to the trailer for a pair of shorts. The track ambulance was met by the local ambulance, followed closely by a fire truck and then a New Jersey State Police helicopter.

After being flown out to the ER, Larry returned later in the day. Legs bandaged but in good spirits, he vowed to restore Old Blue for museum retirement and get his new bike on track ASAP. Everyone hopes that means the next IDBL race at Maryland International Raceway.

An online fundraiser to support the McBrides in rebuilding the iconic machine can be found at http://www.gofundme.com/larrymcbride

Larry’s deal was just one of many whack things that happened on Sunday, including two top end streetbike spills. Throw in rain delays both days and large bike counts and what is billed as “the longest running motorcycle drag race in the world” (meaning in years) suddenly threatened to be literal—a mighty challenge for Miller, his IDBL staff, and the Atco Dragway staff. But as they’ve shown time and again, these guys and gals are undisputed champions when it comes to running the world’s largest motorcycle drag racing events.

Through it all, the famous Atco attitude never faltered, although it did get mighty somber for a while until the news about McBride’s relatively good health was announced to the crowd. They knew they’d witnessed something devastating. 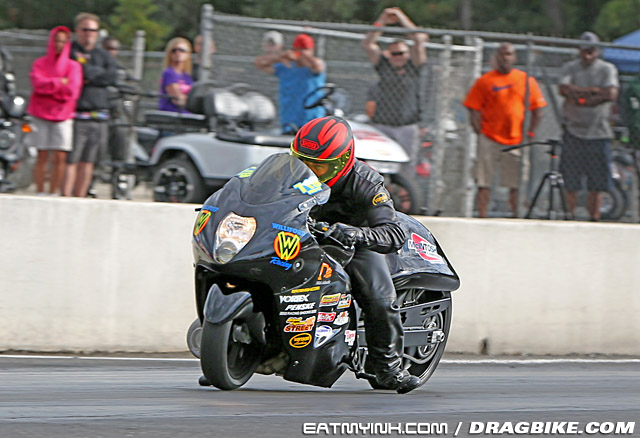 It was the kind of day anything could happen and did. Orient Express Pro Street racer Ehren Litten swapped out a motor in a mad thrash after round 2, but other than taking the tree under power, he never had to run the motor the rest of the night. After a semifinal bye, Litten then ran the final sans-opponent also when number 1 qualifier Joey Gladstone’s DME/Vance&Hines bike was bitten once again by a broken cam or camchain.

That was Litten’s first Pro Street win, and it happened on a weekend when the North Carolina-based rider made his first 6-second pass and jumped all the way to 6.88 and 7th on the PST GOAT list aboard his Rodney Williford-built and tuned turbocharged Suzuki Hayabusa.

So instead of having a chance at the Pro Street win, nearby Delaware native Gladstone won a class he’s never won despite competing in it for three years—DME racing Real Street. And he did it with DME’s new all-motor ‘Busa—the first time ever that a Real Street race was won without a power-adder. 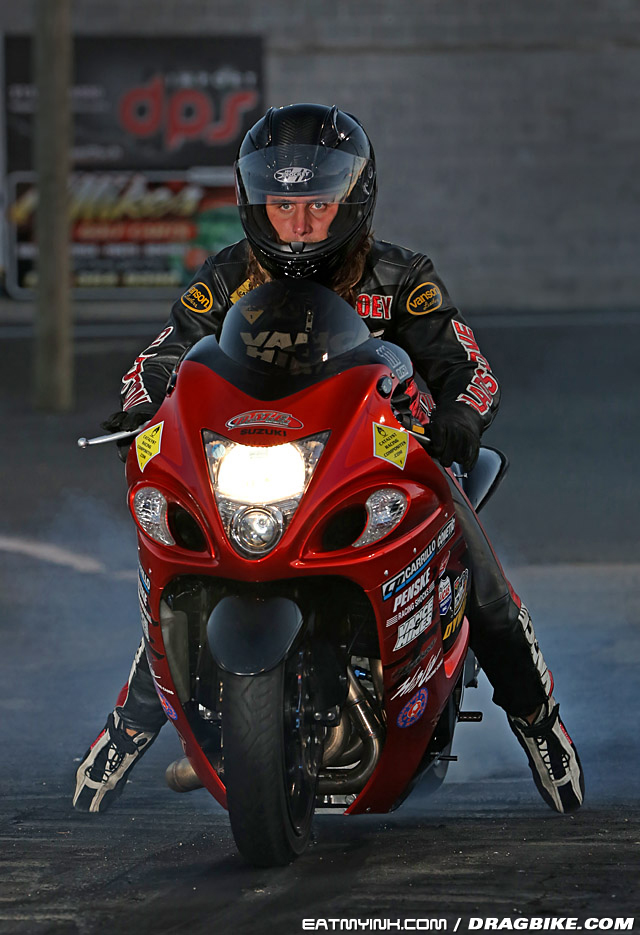 Gladstone beat the turbo Kawasaki ZX14 of Atco hero Rickey Gadson in the final. Gadson’s participation in the event was uncertain as the bike got put back together just in time.

Anibal “Cannibal” Merced took over the Real Street points lead on a weekend where numbers 1 and 2 in the points— multi-time champ Jeremy Teasley and his RS Motorsports team boss Roger Starrette—didn’t show. 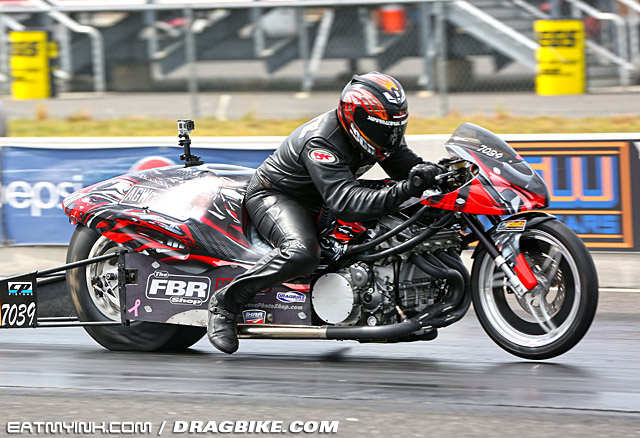 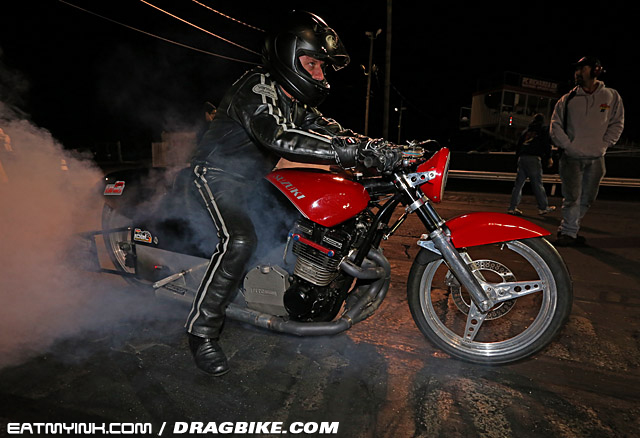 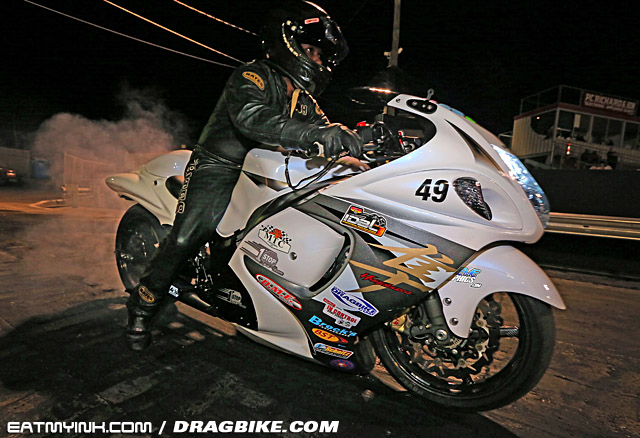 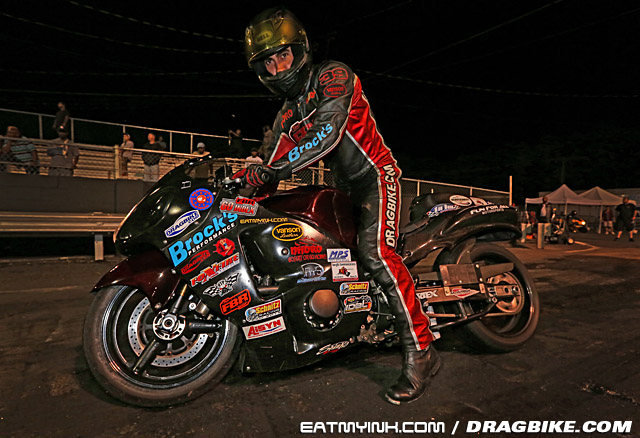 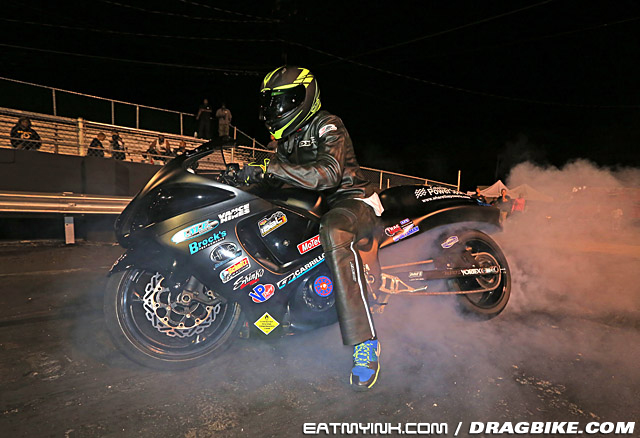 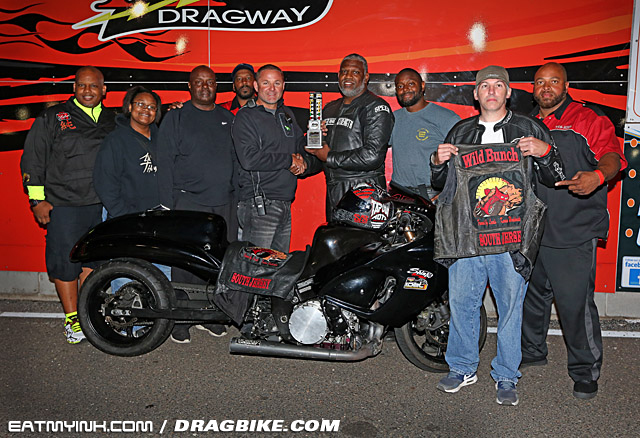 And then there’s Michael Herman Jr. The “Ice Cold Killer” was simply on fire (not literally, as in McBride’s case) in the wee hours of the morning. Nightlife-loving Herman won three bracket races—Brock’s Performance Street ET on Saturday and both Shinko Tires Pro ET races.

Ty Glint didn’t have Herman’s stamina and was asleep at the tree in Saturday’s Street ET final. Herman rode his ’09 “Dottie II” ‘Busa to that win, and his venerable ’01 to the others. 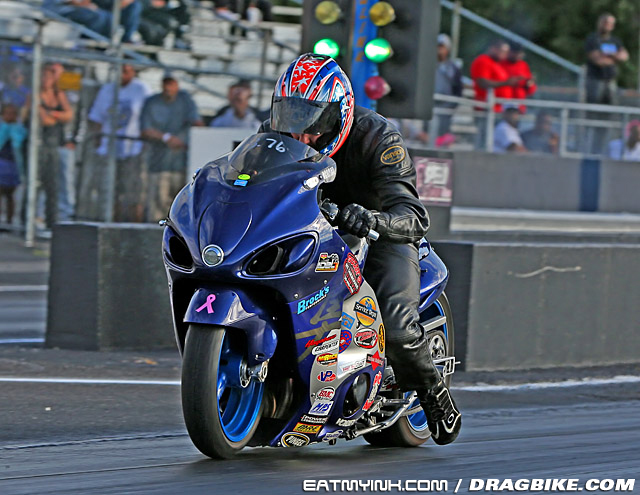 Troy Hausmann cracked under the pressure and redlit against Herman in Saturday night’s Pro ET race, and Boyd Matheas did the same on Sunday. “I want to give a big thanks to David Roberts, Jason Miller, Fabian Brown and the rest of the IDBL and Atco crew for staying up till 1:00 am both nights so we could get these races in,” Herman said via Facebook. “These guys are dedicated to making this the best motorcycle racing series on the planet and it shows.” 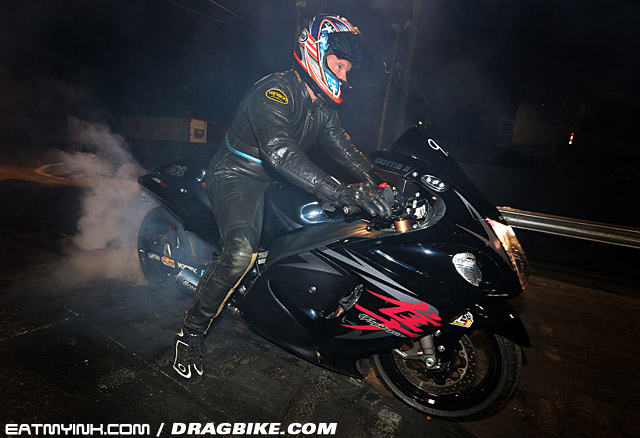 IDBL—“the best”—races next on October 2-4 at the DME Racing Fall Nationals and the Orient Express Pro Street Battle Royale back at Maryland International Raceway.