It took an extra day to complete the IHRA Nitro Jam Summer Nationals. Rain interfered with a considerable portion of the event at  Cordova International Raceway, causing racers and fans to return on Sunday after Saturday’s schedule completely was wiped out. For Tii Tharpe it was worth the wait as he won final-round eliminations in their Nitro Jam pro classe to collect the coveted IHRA Iron Man trophy, championship points and the winner’s check.

Tii Tharpe won his very first Nitro Harley race on Sunday. He defeated Bradenton winner Randall Andras in the final, 6.416 sec/204.57 mph to 6.464 sec./215.79 mph. He was asked the obvious question in victory lane: Was it worth the wait?

“Absolutely,” proclaimed Tharpe, “and the extra thousand bucks in plane tickets. It’s the first time I’ve ever won a Nitro Harley race and I’ve been trying since 2003. So was it worth it? Absolutely. It hasn’t really set in yet and I’m almost at a loss for words. It’s a great day and my first win means a whole lot to me.”

The Nitro Harley class welcomed rider Brian Jernigan back to competition. Jernigan was involved in an accident at Nitro Jam Baton Rouge and made his return to competition at CIR. Jernigan’s qualifying passes were not quick enough to get him into the eight-motorcycle field. Larry Brancaccio was involved in an accident after running off the end of the drag strip during the second round of Nitro Harley qualifying Friday night. The Nutley, New Jersey, rider was transported to a local hospital for evaluation. Because Brancaccio was unable to compete, Jernigan, the first alternate, joined the field. 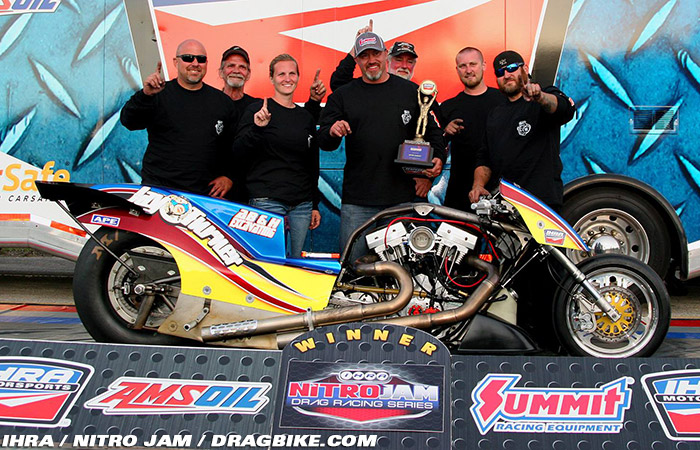 ** Brancaccio was injured and unable to compete, first alternate Jernigan moved into the top eight to compete in the first round of eliminations.

**Update on Drums :  I (Dorothy Olson) just talked to Michael and Drums did not have to have the surgery to relieve the pressure and bleeding on his brain, it has begun to go down on its own so they are going to monitor him. His 1st surgery to clean up his cuts and compound fractures went well and he is resting now. Michael says “Thank You” for everyone’s thoughts and prayers and will keep us posted as to how things are going.