In The Spotlight : Barry Van Hook

Barry Van Hook is the kind of guy who sees no bounds. Never letting doubts into his mind, and holding the girth rarely seen in a world of flyweight 125 pound riders, Van Hook recently came back to motorcycle drag racing after a near 20 year layoff. A two-year stint in Funnybike got him back into it in a big way and now he reaches for the absolute pinnacle of the sport, purchasing the Top Fuel bike of five-time AMA/Prostar champion Tony Lang. 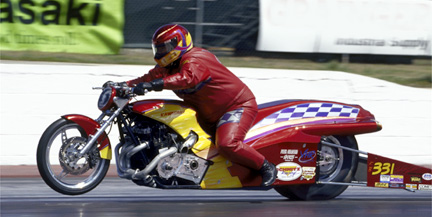 “I am the type of guy who believes that if you sit around you don’t experience things,” said the energetic and personable Van Hook. “Motorcycle drag racing is one of the things I enjoy and believe I can be good at. I have always loved motorcycles. I thought I might as well go for the best.”

Van Hook, who lives in Sidney, Montana, began his motorcycle racing journey competing in motocross events in the mid 70’s. In 1979 he bought a Kosman Kawasaki drag bike built by Jim Ludiker for local racing. He ran the nitrous turbo machine in Super Eliminator with a best time slip of 8.99 at 157 mph.

In 1980 Van Hook teamed with Ludiker to run Bonneville. Van Hook purchased a 1000cc alcohol turbo fuel injected streamliner based on a
1970 Honda 750 built by Ludiker. The Ludiker-Van Hook Special ran 175 mph in the A-AB-750 and 176 mph in APS-AB-750, setting records in both classes.

A year later the team burned up the motor attempting to get into the 200 mph club, marking an end to Van Hook’s Bonneville career. It also marked the end of straight line racing as well, at least temporary, as Van Hook focused on motocross racing with son Will.

During this time Van Hook concentrated on building the seismographic oil exploration firm, Exploration Drilling, he took over from his father. He also indulged his passions for raptors and earned a Masters class Falconer’s license. The urge for drag racing never left, and festered until three years ago when Van Hook placed a call to Ludiker.

“He was running an electric dragster at the time,” remembered Van Hook. “I said I wanted to go Top Fuel racing and he told me it was a bad idea. He said it was dangerous and would consume a lot of parts. He told me to stay with something I knew – a turbocharged Kawasaki.”

He did his research and found in Motorcycle Performance Magazine that Keith Lynn and Roger Gordon were selling their Funnybike. Van Hook contacted Gordon and purchased the bike. “I wanted a good piece that was proven,” said Van Hook. “It would take me a lot of time to build a bike from the ground up.”

In July 2000 Van Hook took his first passes down a quarter mile in 19 years. He made his first laps on the bike at Interstate Dragway in North Dakota got into the 7.80’s. “Roger and Keith were more scared than Iwas,” said Van Hook. “I ended up earning an NHRA Pro Stock Bike license.”

Van Hook’s competition debut at Indy in 2000 was dubious. He backfired the motor on the starting line and walked away with a $14,000 bill.

Van Hook persevered. “I practiced a lot,” he said. “We were stretching chains and bending sprockets but we kept at it. I want to be good at
anything to I do so we worked at it.”

The bike came around and, under the watchful eye of Gordon and Lynn, went to the semifinals at Atlanta and ran a 6.97 at 192 mph at Houston. “I give Keith and Roger 90% of the credit for that one,” said Van Hook.

Van Hook was introduced to aftermarket retailer Dave Schnitz from Gordon and Lynn and the two struck up a friendship. “From the beginning Dave said he would take care of me and he really has,” said Van Hook. “He helps out on every run. If Dave Schnitz is not on the starting line I am a nervous wreck. He is my crutch.”

Van Hook’s son Will, 27, also got into the scene, purchasing Gordon and Lynn’s Super Gas bike in 1999. After campaigning the bike for a half of a season locally, the young Van Hook bought the former Tony Mullen Top Gas bike from Ryan Schnitz who campaigned it in Top Eliminator on a limited Prostar schedule. Will Van Hook ran the bike for one season in Top Eliminator, running 7.60 at 180 with it. “That was a real eye opener for him,” said dad. “He said he could not believe how hard it accelerated.”

The Top Fuel bug never left for the elder Van Hook. He started nosing around the MTC pit and met Tony Lang, former championship Top Fuel rider who still had his “tiger” bike for sale.

“I first approached Tony about purchasing his bike after Gainesville 2000,” said Van Hook. “We struck a deal in August. Part of the deal was that I had to have to have Tony and Gina’s help.”

The final purchase is now complete. Small modifications have been made to the bike, including lengthening the handlebar, to better accommodate the new rider and Van Hook plans on keeping the bike in Florida at MTC with planed test sessions in February. Van Hook’s eyes are on a possible debut at the Prostar MRE Sunshine Nationals in Gainesville. “We will see where we are after I get a little time on the bike,” said Van Hook. “I do not want to hurt the class by showing up to a race before I am
ready.”

Van Hook had originally planed to run both Top Fuel and Funnybike, but it has since been decided that Will will run the Funnybike. “He will be testing the same time as me,” said Van Hook. “We have no timeframe for when he will race it.”

“Me and junior share all the same interests,” continued Van Hook. “We have a great relationship. The best part of the races for me is that the whole family goes. My wife Nancy – I will not race without her – my daughter Julie are always there and my son-in-law Chad Lander is the crew chief. We have a great team. I have some great sponsors in Veritas Geo, Four Seasons Sports and Schnitz Racing. I feel fortunate that I have been able to meet such decent and honest people.”