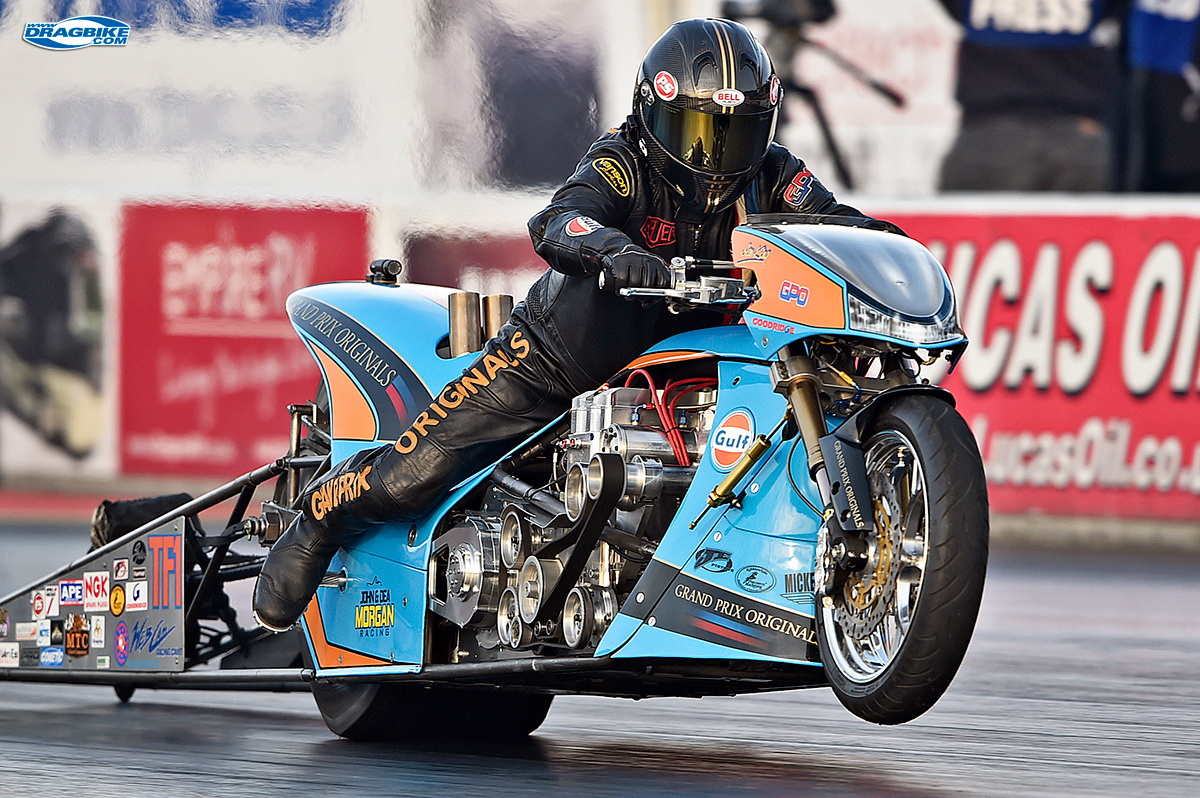 An inline-four-cylinder engine displacing less than 1,600 cc which develops over 1,500 horsepower—and is stuck between the rails of a motorcycle chassis—is quite a significant anomaly in today’s engine world, unless you’re talking about the 1,585cc engine under the fairing of King Racing’s Top Fuel motorcycle. Running on 87- to 89-percent nitromethane and sucking down well in excess of 40 psi boost pressure, this engine is not for the weak. 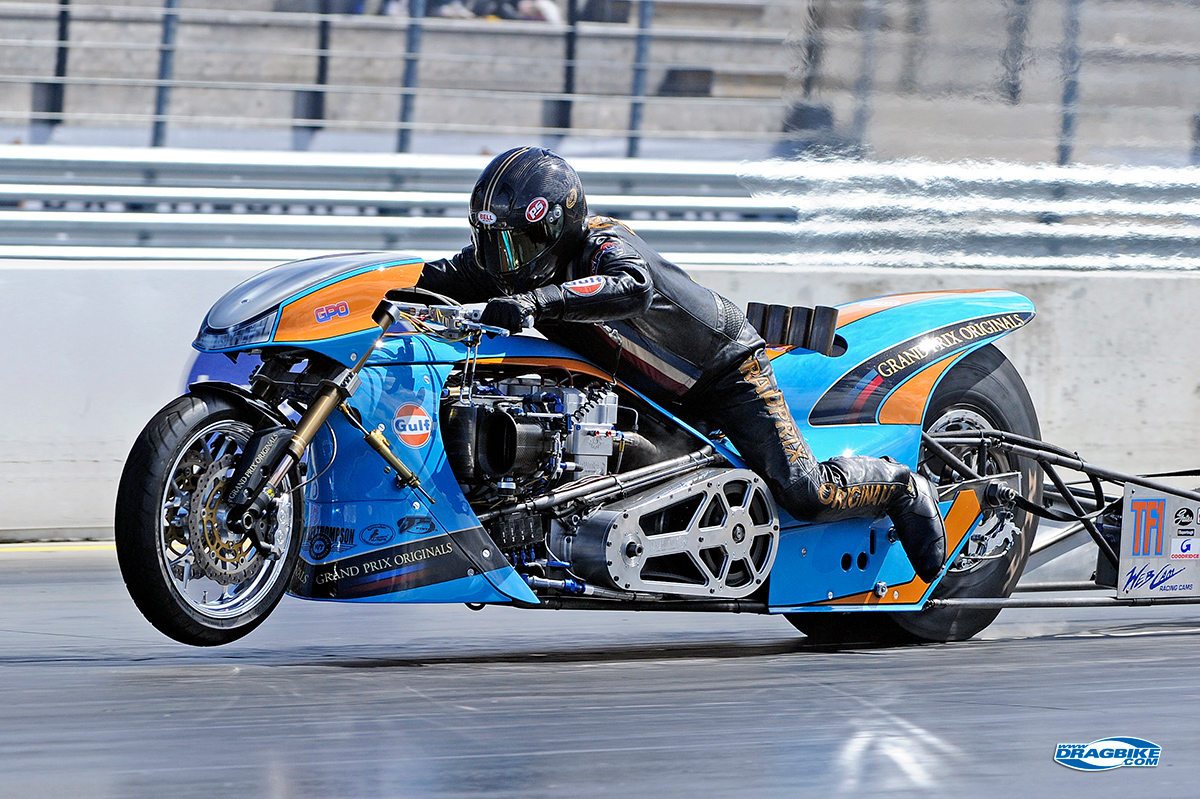 King Racing’s Top Fuel bike has a 1,585cc Puma powerplant that puts out approximately 1HP per CC. Yes, you read that right.

Making this much horsepower from a four-cylinder engine is no small feat, and in this case, it’s achieved through the use of a supercharged powerplant ingesting mountains of nitromethane on a quarter-mile pass. The racer who pilots the vehicle, multi-time Top Fuel Motorcycle champion and King Racing’s namesake, Ian King, is well aware of the magnitude of his exploits on the quarter-mile tracks his team frequents in Europe.

“I have ridden many motorcycles in my life, two-stroke and four-stroke, single cylinder to six-cylinder, sports, cruisers, customs and Grand Prix motorcycles, both on the road and on track. But nothing comes even close to the experience of riding a Top Fuel motorcycle. The mass, the ferocity of the acceleration and the never-ending surge of speed is truly mind-numbing,” says King. 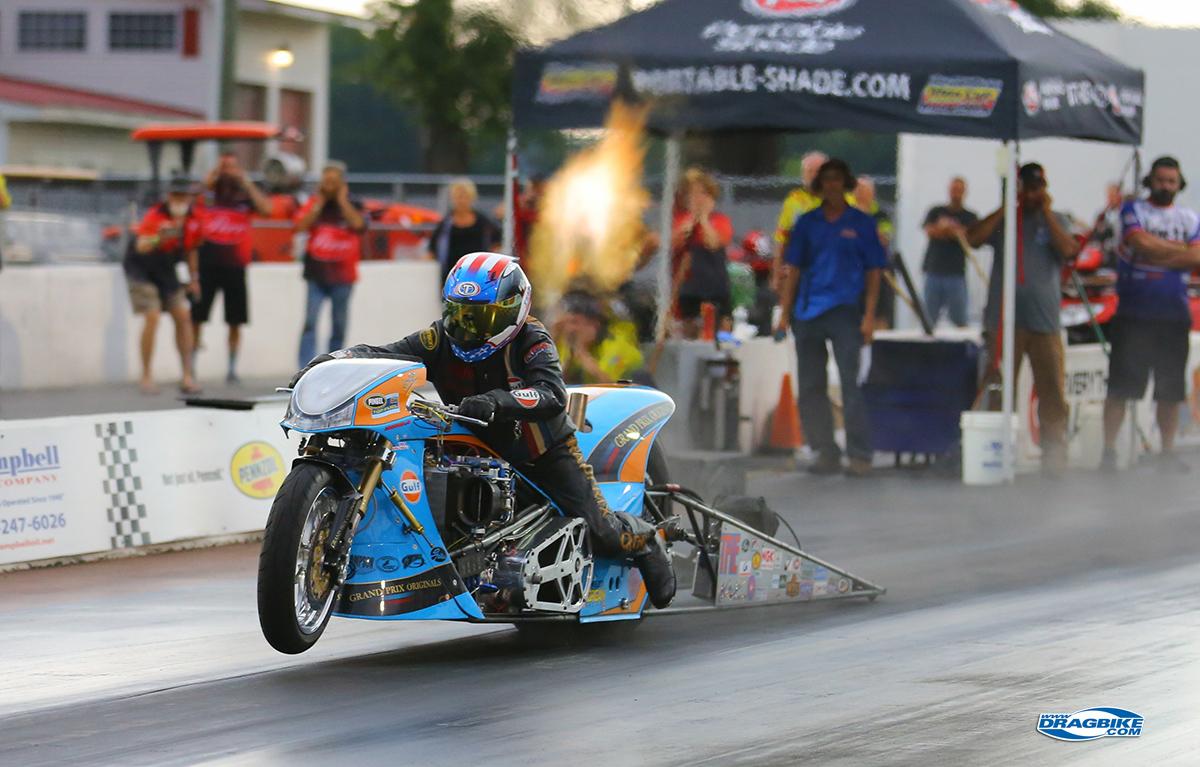 “The mass, the ferocity of the acceleration and the never-ending surge of speed is truly mind-numbing.” – Ian King

The performance of Top Fuel motorcycles is astonishing: 0-60 mph in 0.7-seconds, 0-100 mph in 1.1 seconds, 3.8-second eighth-mile times at well over 200 mph, and quarter-mile times in the 5.7-second range at well over 242 mph. The numerical performance rivals that of an NHRA Pro Mod racecar, which produces well over 3,200 horsepower to achieve the same types of acceleration rates on the track. But the Pro Mod has a full chassis, a seat, and another drive tire, for starters. Meanwhile, King has one hand on either side of the handlebar, and a big set of you-know-whats between his legs. An acceleration rate of over 3g on every run means just hanging onto the motorcycle is a challenge in itself.

In all honesty, there is simply no comparison. The Pro Mod and the Top Fuel motorcycle are two completely different animals. 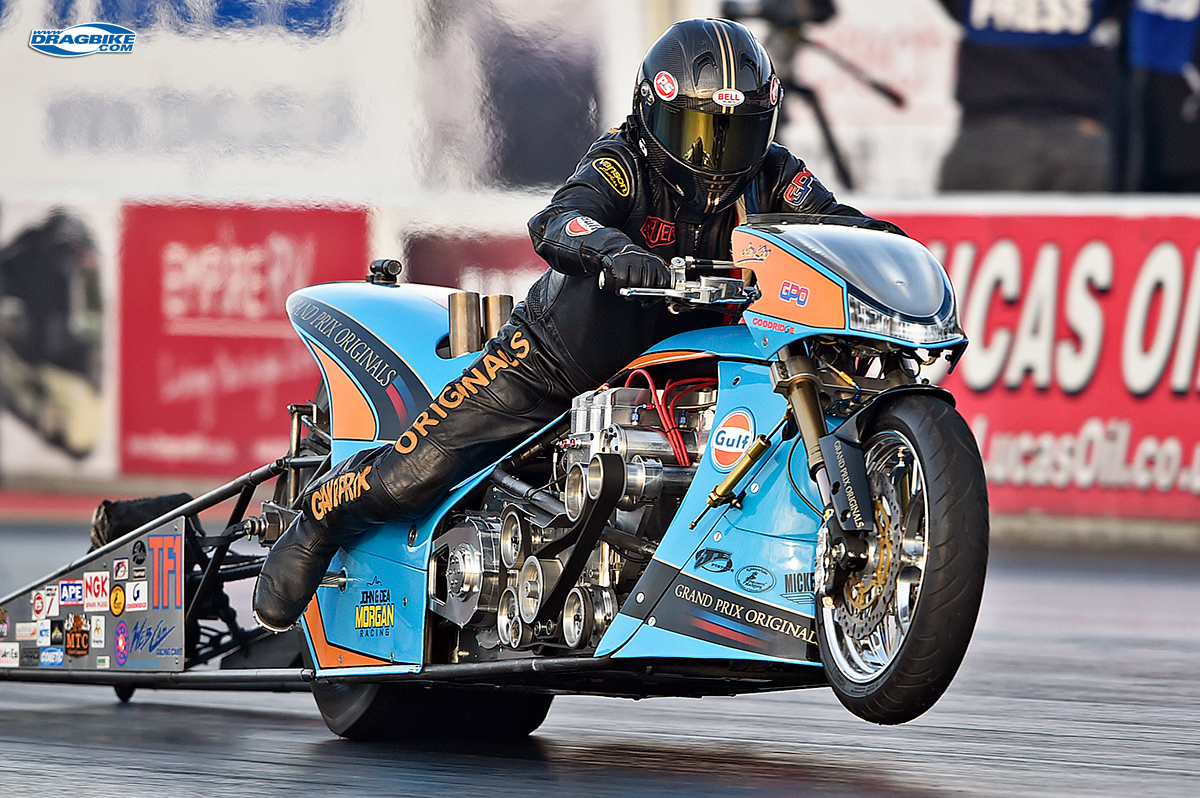 The chassis required to harness this type of power and send it through one big tire is robust, yet minimal enough to keep weight down. Puma Engineering developed a chromoly, removable-backbone chassis with a 102-inch length to stretch King out and balance his weight on the bike, yet provide him with the ability to lean it and steer the bike with his body weight when necessary, which is during every run. In the rear, a 14-inch-wide wheel wears a 31-inch-tall slick. Aluminum bodywork keeps the weight down while providing the necessary contours to slice through the air.

“When I hit full throttle at the green light, it’s a feeling of being propelled down a very narrow tunnel. The closest analogy I can say is that it’s like firing a gun and riding the bullet! The front wheel is in the air, and so normal steering becomes obsolete. It’s hard to focus, and if the bike makes a move offline, any adjustment to your body position to steer the machine must be instinctive. If you need time to think about it, you will hit the wall. I’m concentrating on the finish line at the end of the tunnel and preparing to hit the chute and brake hard as soon as I cross the line,” says King. 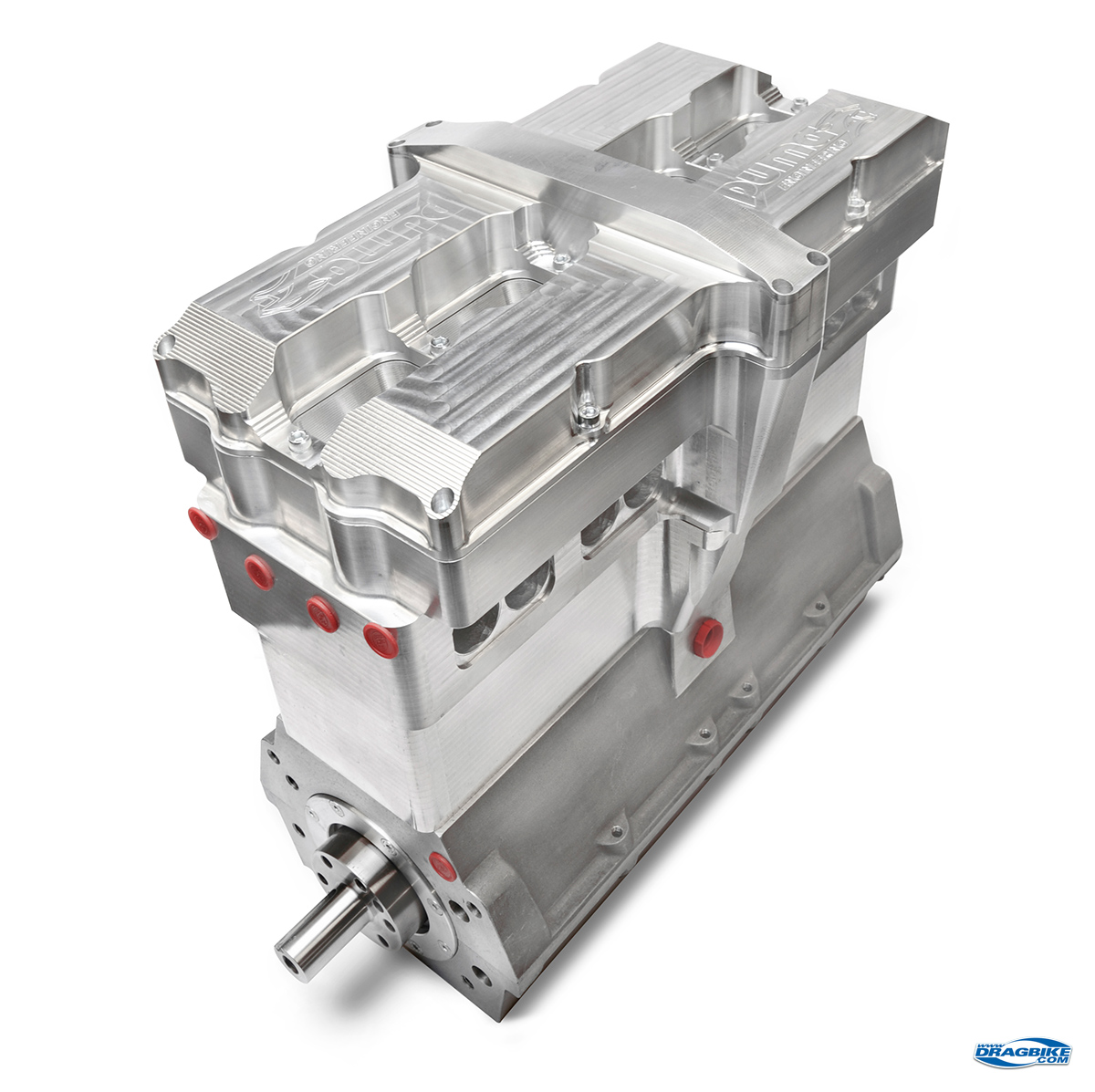 As the driving force behind Puma Engineering, King not only races the motorcycle, but has a tight grip on the pulse of the company manufacturing the parts to make it possible. Unlike Top Fuel and Funny Car engines, which have used the same basic Hemi engine architecture for the last few decades, the Top Fuel Motorcycle realm is not stagnant; Puma Engineering is constantly examining the rulebook to look for ways to advance its cause on the track.

Over the years, the Puma engine design has evolved from its ‘pre-unit’ Triumph Twin roots, through the ubiquitous Kawasaki Z1 2V platform in the 1970s and the Suzuki 4V in the ’80s, to become what King uses in his own machines now. This engine uses a Yamaha FJ1200’s 93mm bore spacing, but instead of the traditional center cam chain drive, Puma uses its unique center gear timing drive system. A gear is centered upon the crankshaft, which drives a shaft-mounted idler gear mounted within the crankcase, and finally turns the sprocket connected to the chain-drive system to actuate the Web camshafts. 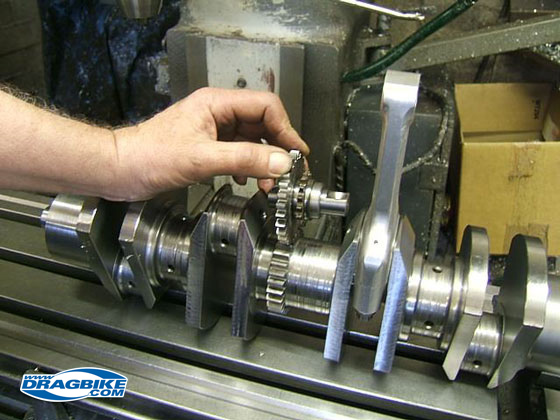 Puma’s propietary center gear timing drive system features a center-mounted gear on the crankshaft that drives a shaft-mounted idler gear which leads to the chain and sprocket actuated camshafts. 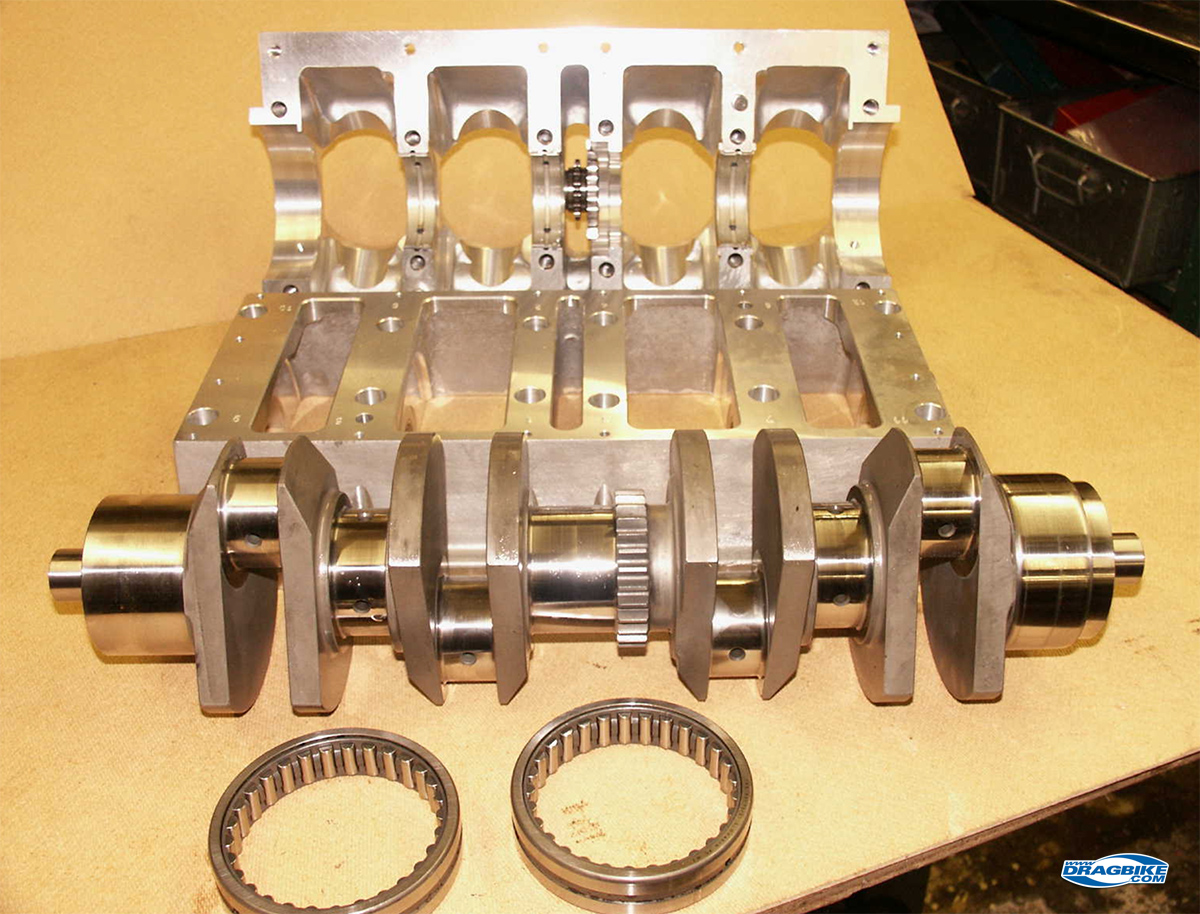 The chain drive has its tension set by a manually-positioned sprocket to ensure camshaft timing remains accurate with the massive harmonic vibrations seen in this engine. The one-piece idler gear and sprocket has an interesting layout: there’s an 18mm shaft and a set of needle roller bearings in the center, which are bolted down into the crankcase before the cylinder liners are set into place. This Puma design permits the use of a crankshaft bereft of the usual weak spot in the center—where traditional designs have the area each side of the cam chain drive machined away—while permitting the use of just about any aftermarket cylinder head available.

The flat-plane, chromoly billet steel crankshaft from Puma Engineering is housed in the billet aluminum crankcase, which has upper and lower halves secured by 12 M10 bolts. With its 75 mm throws, it combines with the 82 mm bore to set the displacement at the aforementioned 1,585 cubic centimeters, or 1.585-liters. There are six main bearings: the front and rear are roller bearings while the center four are a traditional babbitt-style shell bearing. Forged aluminum connecting rods from BME are used, as King feels that the forging holds up better in this application when compared to a billet rod design. 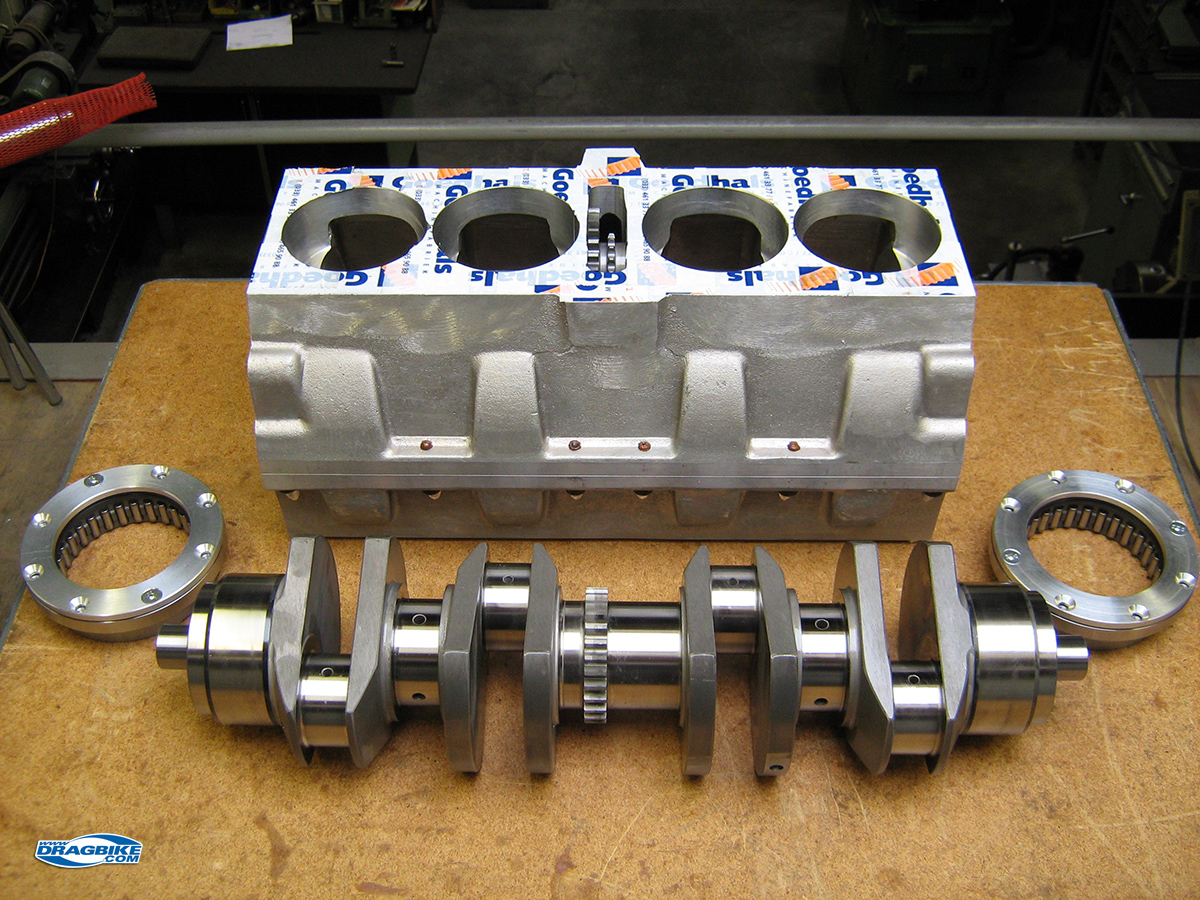 The billet crankcase houses a chromoly billet steel crankshaft with a 75mm stroke and a combination of roller and babbitt-style bearings.

Since the engine doesn’t need to run for a long period of time, it’s built with no cooling passages and 82mm bore, iron cylinder liners. Pistons are supplied by JE pistons, and have several special features to help them hold up to the immense temperatures in the combustion chamber.

“We use our standard 2618 aluminum forgings, but everything is thickened up for added strength. The top ring land width is thickened up quite a bit more than a normal piston to account for the increased pressure, and they don’t used any wire or spiro wrist pin locks, but buttons instead. There is almost no chance a button can come loose or fail, which under these conditions is critical,” says Daniel Rice, Application Design Engineer for JE Pistons. 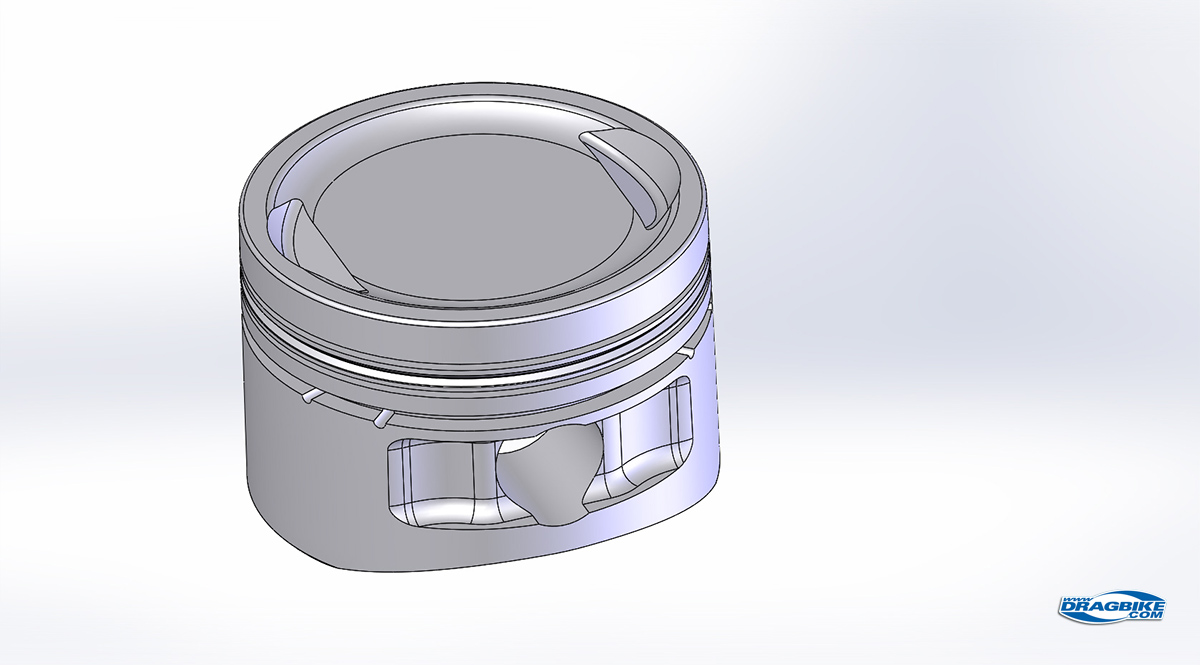 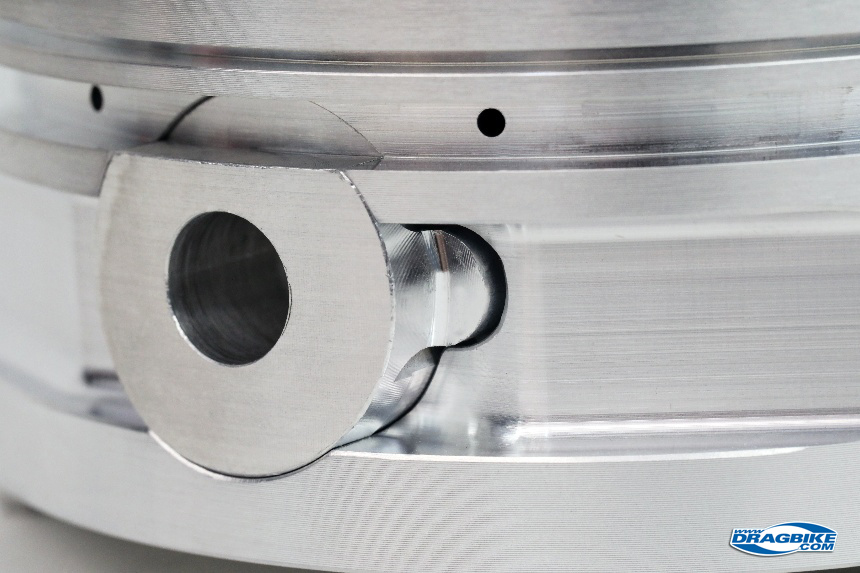 Custom JE Pistons forged slugs top off the rotating assembly in the Puma. They’re forged from 2618 aluminum and have a beefed up top ring land to handle added pressure. Buttons are used to keep the wrist pin in place instead of locks so there’s no worry of coming loose or failing.

Nitromethane creates its own partial combustion, so special considerations are given to the piston tops during the manufacturing process.

“We have a piston coating called KoolKote, which is an aerospace-quality hard anodize coating that is applied to all surfaces of the piston. This coating is specifically designed for use in nitromethane engines such as Top Fuel Drag racing. It will withstand greater temperatures, and also protects the piston from the corrosive effects of this type of fuel. The coating will not chip, flake, or peel. Special clearances are used when designing a piston with KoolKote,” says Rice.

Additionally, Rice says a gas distribution groove is used on the top ring land. This small groove helps evenly distribute the pressure around the circumference of the compression ring for better ring seal. The engine uses a chrome faced stainless steel top ring and a ductile iron second ring. 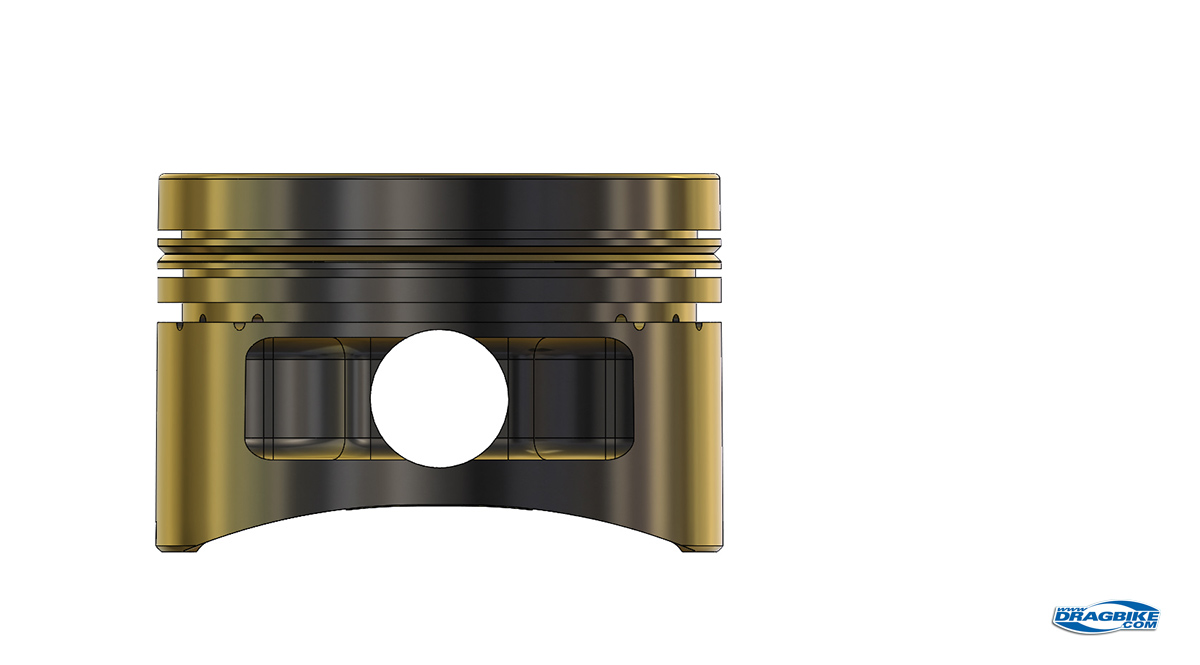 The Top Fuel JE pistons are designed to utilize KoolKote, a propietary hard anodize purposed to withstand the harsh conditions of nitromethane. Additionally, a gas distribution groove on the top ring land is used to evenly distribute pressure for better ring seal. 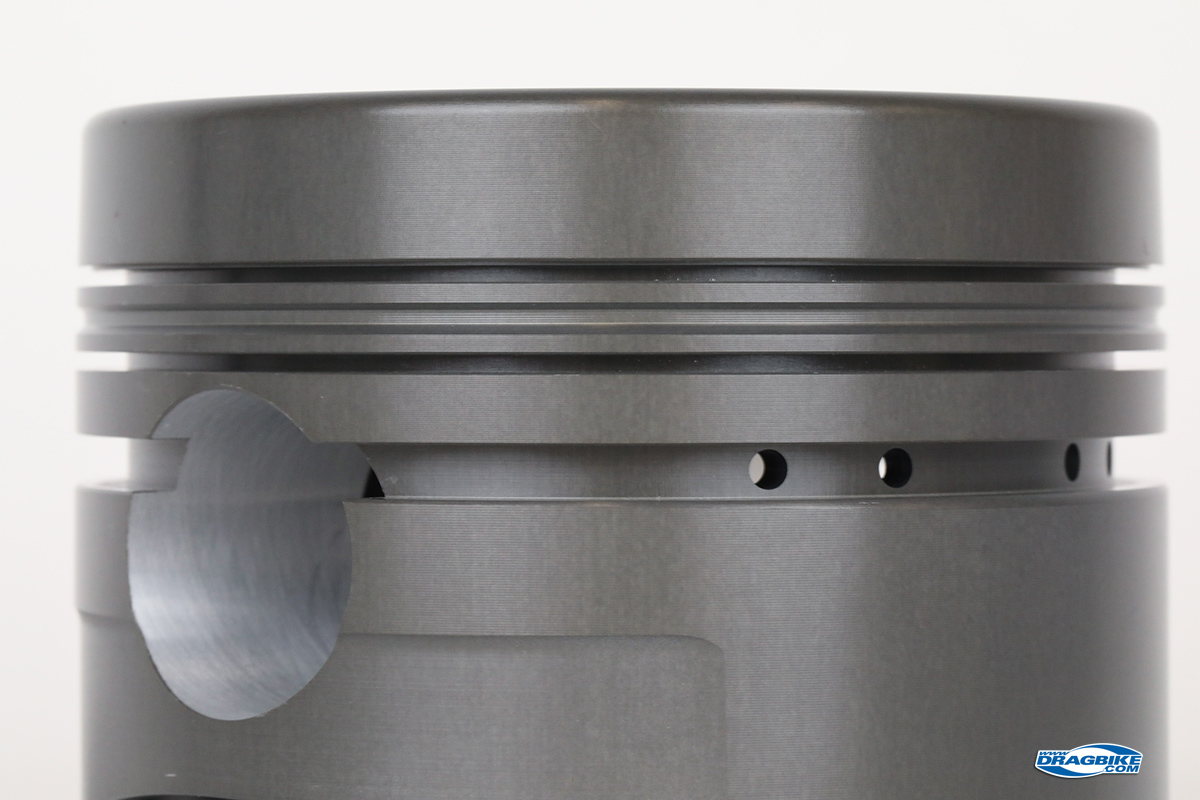 The Puma-developed cylinder head uses twin-overhead-camshafts, and the unique three-valve, aluminum cylinder head arrangement works with the center-mounted timing system to make gobs of power for the King Racing team. Atop the head, sit quad aluminum bronze hemispherical sections the King Racing team calls the “skulls”, which contain the combustion chambers and a segment of the ports, without the need for valve seats. Inside each skull sits a pair of Kibblewhite 33mm stainless steel intake valves and a single Kibblewhite 41mm Nimonic steel exhaust valve, driven by a pair of Web Cams camshafts with a grind developed through years of experience. Kibblewhite DLC coated tappets and Colsibro valve guides also ensure proper valve operation under boost.

One NGK spark plug (two per cylinder) sits on each side of the exhaust valve, while a pair of MSD Pro Mag 44 magnetos combine with the Kinsler fuel nozzles and Don Jackson Engineering/Electrimotion constant flow mechanical fuel injection system to turn the engine to a max of 10,400 rpm. The 2.1-liter twin-screw HPS supercharger sucks air through an oval throttle body and carbon fiber intake scoop designed in-house at Puma Engineering, then forces that intake air through a Puma-built billet manifold. The manifold has been configured to promote equal airflow across all four cylinders. 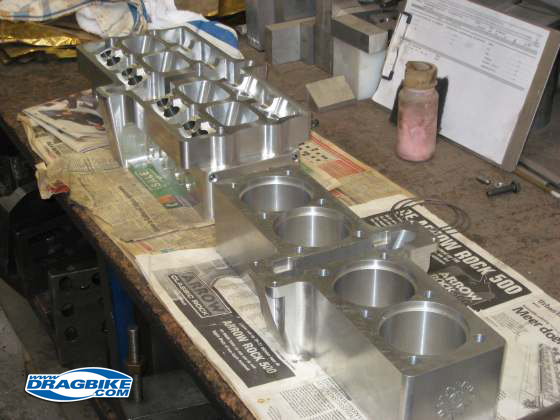 Each cylinder is fed by a constant flow mechanical fuel injection system and a custom, billet Puma manifold.

Oiling is also of primary concern in the engine, and it is no surprise that the team uses lubricants and greases from their primary sponsor, Gulf Oil. What is surprising is that the oil is a standard road vehicle lubricant freely available from any Gulf gas station in Europe: Gulf Max 20W50. King selected this oil after running extensive comparison tests. A custom dry sump system incorporating a Puma/Titan Engineering three-stage oil pump is installed. Oil pressure is 140 psi during a run, with 90 psi at idle to keep the engine well-lubed.

There is a Pro Alloy fabricated oil pan with dual pickups and dual scavenge pumps, which sends the oil into one of the UK fabrication specialists’ bespoke 5.0-liter wet sump tanks. The pressure side of the pump sends the oil into the main gallery—which also offers a feed to a gallery around each iron liner to help keep the engine cool. Goodridge external lines also lubricate the camshafts and their bearings (as well as all other fluid handling operations on the motorcycle).

A Waterman gear drive fuel pump feeds the constant-flow mechanical injection system, and a single Kinsler nozzle feeds the blower along with another pair per cylinder in the manifold. Nearly four gallons of fuel are consumed on every run before King grabs the brakes and pops the ‘chute. 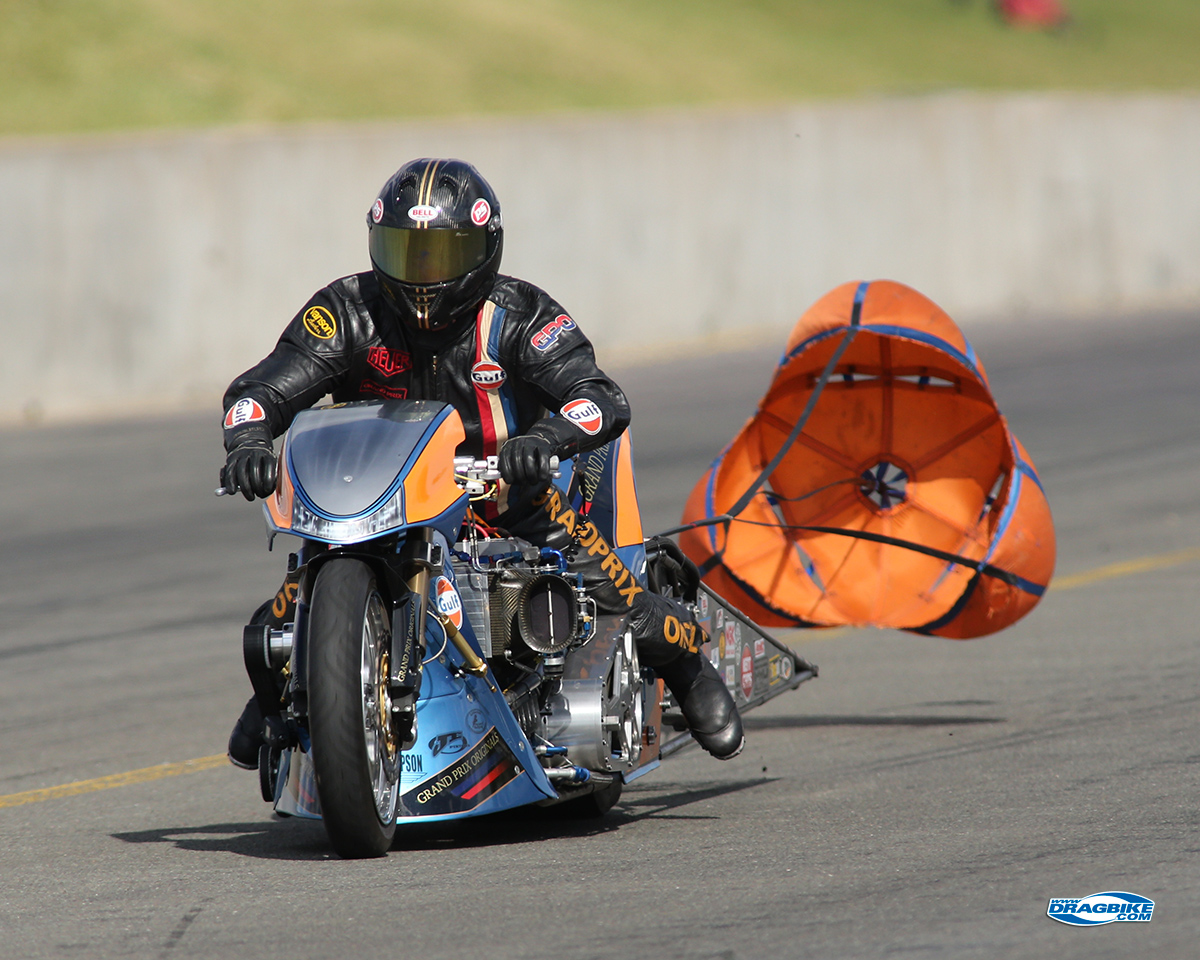 Almost 4 gallons of fuel are burned in the 5.7 seconds between opening the throttle and ejecting the parachute.

With over 430-liters of air and fuel passing through the engine every second, one has to wonder where he finds the cognitive ability to even find the shifter button, let alone bang it on time. But then Top Fuel motorcycle riders are a breed unto themselves

These motorcycles are a spectacle, one you should find time to watch should the opportunity ever present itself. 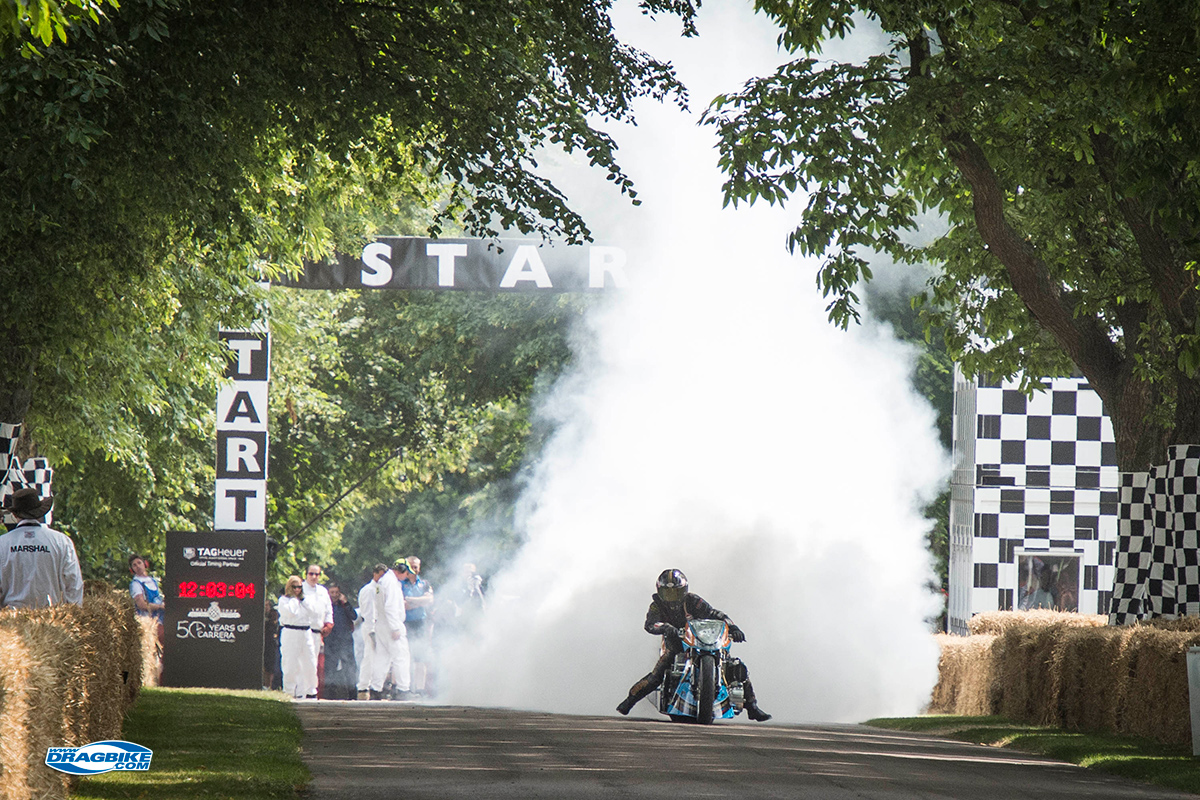