It was a busy winter for the NLR / DME / ORIENT EXPRESS team. Jason Miller’s bike was ripped apart after the last MIROCK event in November 2005 to make preparations for the 2006 rules. Also, a new brand new bike was built for Dimey Eddinger to ride in 2006. There were countless hours spent over the winter retrofitting Jason’s bike with new parts and constructing Dimey’s bike from the ground up trying to get both bikes done in time for the first MIROCK event in April.

In fact, Jason’s bike was started for the first time at 3:15 a.m. on Saturday morning of the 1st event. The only problem was that the bike was still over 2 hours from Rockingham Dragway. The team and the bikes were still at DME Chassis in Winston Salem, North Carolina working feverishly to get the bikes done. “We laid our heads down in the truck for a couple hours after we started my bike, woke up and drove to Rockingham. On the way to the track, we discussed our first tune-up for the AMS-1000 boost controller for both bikes because we knew we wouldn’t have much time before the 1st pass once we got to the track. We got to the track only 45 minutes before the 1st qualifying session, and we still had to go through tech, service the clutch, set tire pressure, and fill the air shifters”, said Miller. 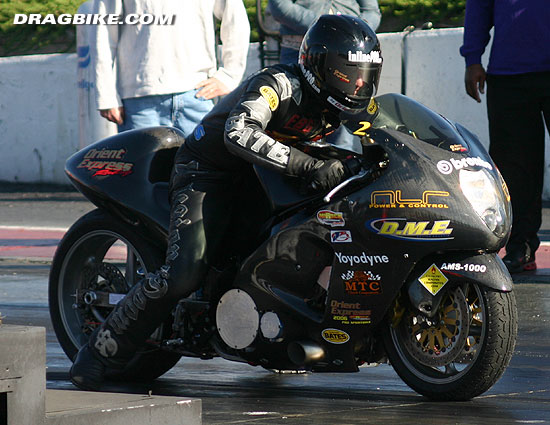 The team knew the 3” ground clearance rule and front axle limitations would slow the bikes down some, but Jason still managed to run a 7.98 on only the 3rd pass down the track. “It’s amazing at how much power we had to pull out of the bike to keep the front end down. The bike was still wheeling in 5th gear at 187mph at the finish line”, said Miller.

Dimey Eddinger shocked everyone when he ran an 8.25 off the trailer on his first ever pass on a 60” bike, which was good enough to qualify him 5th. Dimey later on had engine troubles when the bike got to hot and hurt the motor and he had to sit 2nd round out.

Jason managed to win the first two rounds before facing Gerald Cox in the 3rd round. “Gerald really had me concerned, because he ran a 7.90 in the 1st round and he is tough on the tree”, said Miller. Gerald did in fact tree Jason with a .038 reaction time to Jason’s .080 reaction time, but Jason drove around Gerald with a winning 7.94 to Gerald’s 8.06.

In the final Miller faced Anthony Navarro, who had also ran in the 7.9 second zone that weekend. Navarro was off first with a .062 reaction time to Miller’s .103 reaction time, but by the 60’ clock Jason had made up half the difference already with a 1.37 60’ and was coming on strong on his best pass of the weekend before he got out of the groove at the 1/8 mile and blew the tire off the bike so hard, that the bike wouldn’t shift into high gear and he ran another 7.94 at only 182mph. In the other lane, Navarro had a transmission failure and the bike locked up resulting in a half-track crash. Navarro did walk away from the accident, and will no doubt be in many more Pro Sportbike finals this year. Our team wishes him well and a speedy recovery. 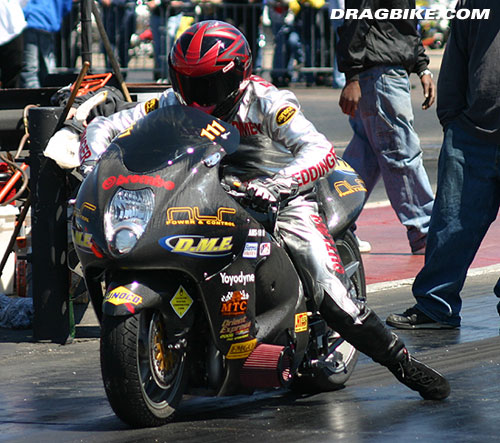 “This is the first time in my life that I have ever lead the points in any class, and held both ET and MPH records, It’s very humbling. We have more work to do the bike and lots of needed testing, this year is going to be tough in Pro Sportbike. There are a lot of players in the class now, more than ever before. I know the bulls eye is on us now, but I wouldn’t have it any other way”, said Miller.

Jason Miller’s and Dimey Eddinger’s next event will be the MIROCK LPS Racing Sandhills Bike Open at Rockingham Dragway on May 20-21, 2006.

Next Event: MIROCK LPS Racing Sandhills Bike Open at Rockingham Dragway on May 20-21, 2006.