Joey Gladstone and Cory Reed are ahead of the curve when it comes to the race to 60-feet in Pro Stock Motorcycle.

Joey Gladstone put a new wheelie bar on his EBR-bodied Pro Stock Motorcycle ahead of the first qualifying session at the Virginia NHRA Nationals. The early returns? Not bad. He ran 6.967-seconds to the quarter mile, .002-seconds quicker than teammate Cory Reed and good enough to earn the No. 8 position early in the weekend.

The new wheelie bar is made out of carbon fiber, just like Reed’s, and is a switch away from the aluminum wheelie bar he employed previously this season. The swap came as a result of good early-track performance from Reed throughout the season – which is interesting, because (on paper) both of the Reed Motorsports motorcycles have been excellent in 2019. 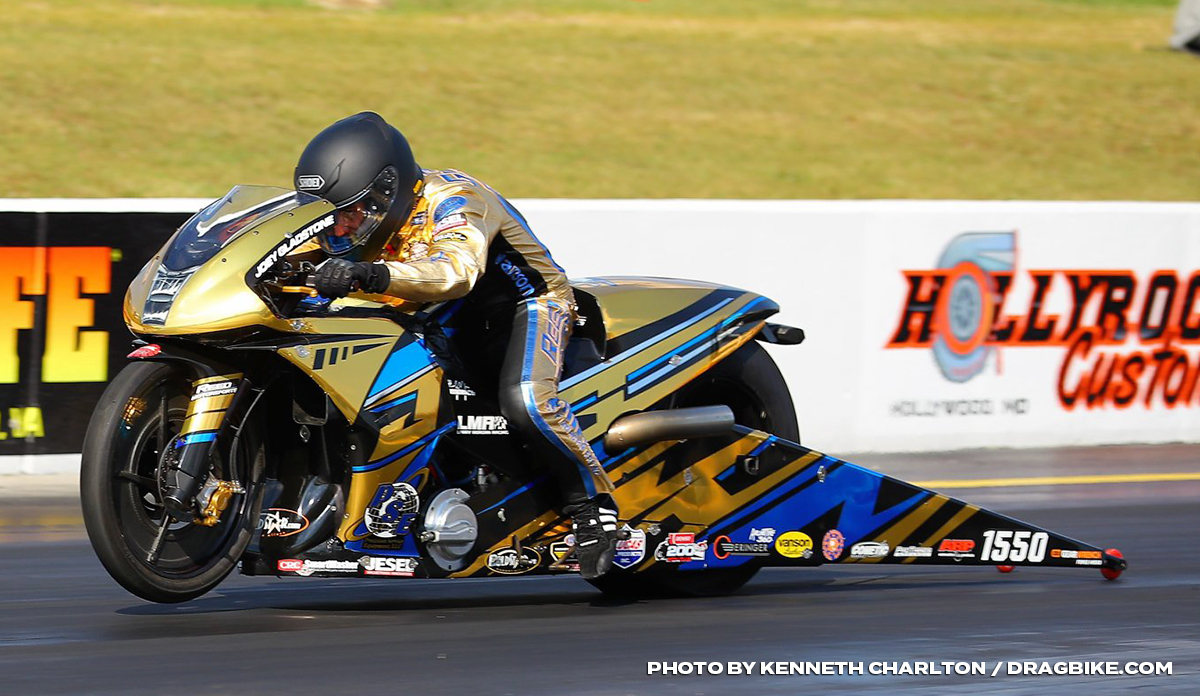 Reed and Gladstone are fourth and fifth, respectively, in average 60-foot time. That has not been an issue for the now-Florida-based bikers. They’re solidly middle of the pack when it comes to power and the back-half numbers show it. The team employs Larry Morgan to build motors and the EBR-body, while an earlier generation than those run by Matt Smith Racing, aero very well.

So, while that’s currently a deficiency, it will likely not be for long.

“We like where we’re headed,” said Gladstone. “Our bikes are almost identical right now. We run the same clutch setup, the same engine setup, the same map. After putting the carbon bars on we’re going to be darn near identical. Those carbon bars just seem to be more consistent and they ride and track really nicely.

“We put a slo-mo camera on the aluminum bars last year and just iso’d them and you could see the bars wobbling all the way down the track. It really affects the whole bike.”

While Pro Stock cars might use steel wheelie bars, Pro Stock Motorcycles almost exclusively use pieces made from carbon fiber or aluminum. There are many other possible tweaks you can make with the package, including the struts that bridge one side to the other. Those affect the rigidity of the bar which dramatically impacts the early elapsed time – the part of the run when the bike is using the wheelie bar as the back tire.

Both motorcycles have room to improve, but it might not show up in quarter mile timeslip because of impending weather (it’s going to be hot). But keep an eye on the 60-foot and 330-foot times as the weekend moves forward. There’s a very good chance Gladstone and Reed will lead the category – or be very close – and that bodes well moving forward.