For the last few years, 2016 NHRA Pro Stock Motorcycle (PSM) champ Jerry Savoie has talked about reducing his schedule. The busy alligator farmer is finally going to do it, and 2013 U.S. Nationals winner John Hall will be the first rider to race Savoie’s White Alligator Racing (WAR) Suzuki since Chip Ellis subbed for Savoie following neck surgery several years ago. 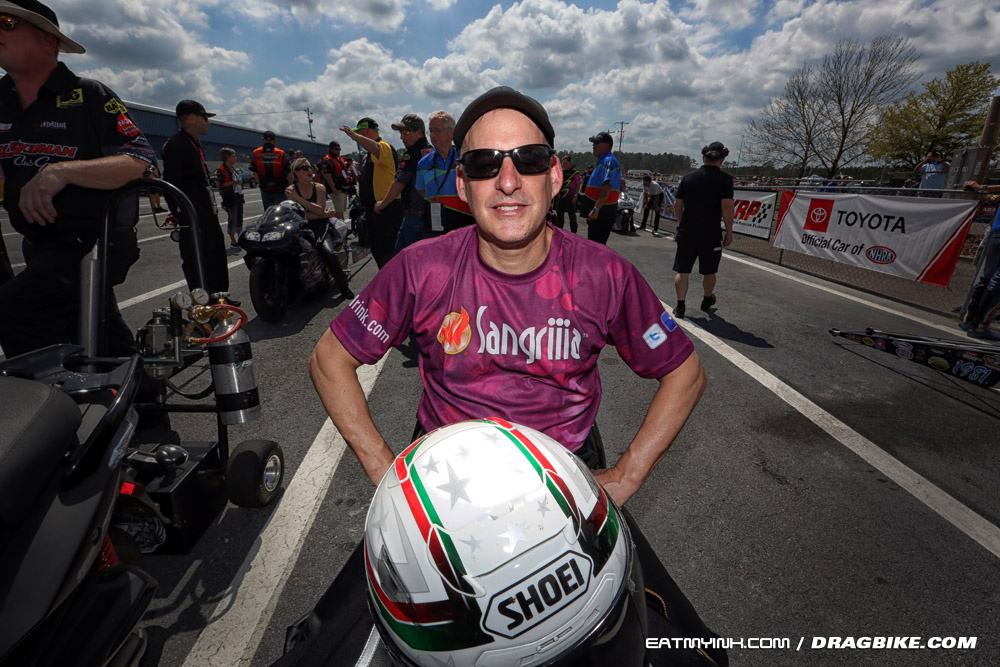 It will be the first time in eight years that Hall’s ridden a Suzuki. That was a bike he bought from Charlie Sullivan in 2011. “But then Katie (Charlie’s daughter Katie Sullivan) crashed her bike in pre-season testing so they bought it back from me,” said Hall, who never raced the bike in NHRA competition. “I think the fastest I went on that bike was a 7.01. I only rode six passes on it—I don’t even remember it!” 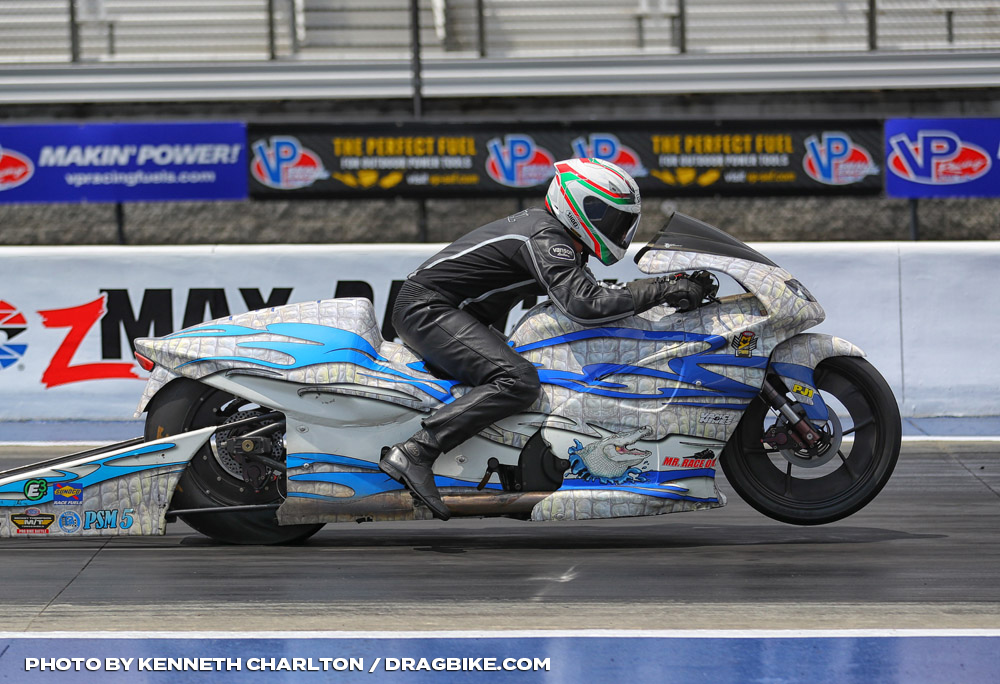 But at the time Hall bought his own Buell, he also had to double down away from the track and focus on business. The Connecticut real estate developer and president of Dichello Distributors didn’t have time to run his own team, and has appeared only sporadically since on NHRA entry lists. The Buell is also in sore need of performance upgrades to be race-winning competitive.

And Savoie’s responsibilities away from racing are also multiplying. “I’ve just got so much stuff going on here, people just don’t have a clue,” said Jerry.

Indeed, Savoie’s operation has expanded beyond the alligator farm to include cattle, a big game preserve in Mexico, and a whole lot of tractor time gathering hay. The hands-on Savoie insists on doing as much of it himself as possible. “I’m trying to build some buildings, and people are waiting on me to get some cement poured. Once that’s done the insulation guy’s waiting to get the insulation in—it just goes on and on.”

So like peanut butter and chocolate, the interest of these two busy business owners overlapped and Hall will be riding Savoie’s bike this weekend in Virginia and an undetermined number of races afterwards. As he has in the past, Hall will be supporting Doug Herbert’s B.R.A.K.E.S. teen driver training initiative on the bike. 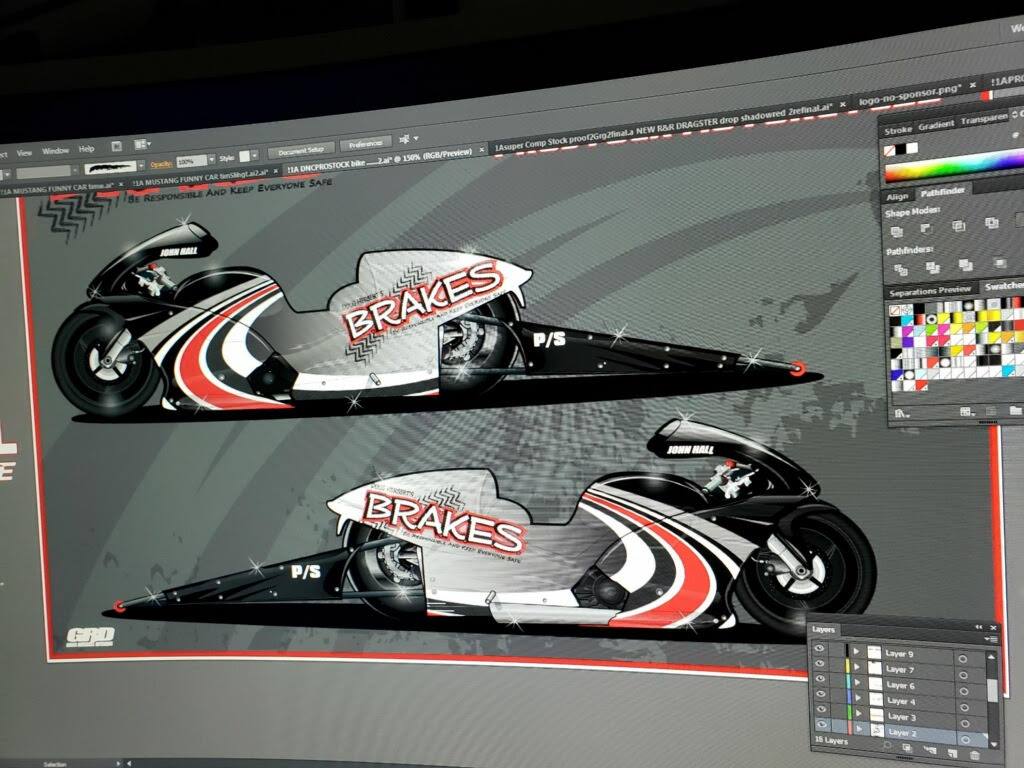 Hall tested with the WAR team on the Monday after the Four-Wides at zMAX Dragway, and John admitted to being a little nervous before making his first pass on a foreign piece. “You don’t need to tell me that,” said WAR tuner Tim Kulungian. “But he did fine. It’s a Pro Stock bike. It’s a little bit wider than the bike he’s used to riding. It’s a little smoother, doesn’t vibrate as much—so everything was in the plus for him, and he did a really great job.”

The day was spent getting Hall comfortable with the bike and team, while Kulungian narrowed in on Hall’s ability to hit his shift points. “It was good that we were able to progress like that in one day,” said Hall.

“We learned a lot of stuff, like their starting line routine. We were kinda off on that on the first pass. I’m up there for like two minutes waiting for someone to come pat me on the back. I’m lookin’ and lookin’ and no one’s pattin’ me on the back! So we came up with a different routine and it worked the next three passes.

“I didn’t know what to expect. There’s little things you’ve got to know, like the burnout is at 10 grand—it’s screamin’! The Buell is barely turning in the burnout. 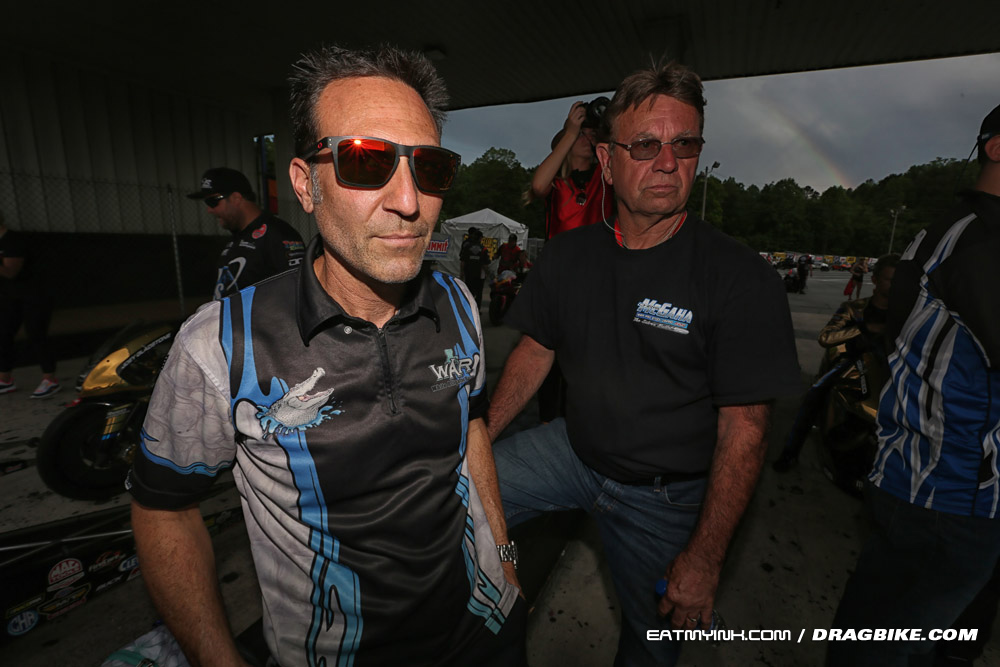 “The tank is much different and you can tuck lower. The shift points are different, but it didn’t seem that far off from the Buell.

“That first pass I didn’t feel good at all. The bike went to the right and I didn’t know what to expect. That bike was pretty aggressive on the hit and wasn’t really 100 percent ready for it.”

“The first pass he went a little crooked and got out of it, like a good rider would,” said Savoie. “From then on he went down the track.”

“Second pass was better,” agreed Hall. “Went to the right a little bit but I corrected it and went down the track.

“On a Buell, you have to be pretty aggressive in your corrections. You have to swing your ass over to get the bike to move. I did that with this and the bike made a BIG move, and I though ‘Oh sh*t, I guess I don’t need to do that!’ You can correct pretty easy without making a big move. The bike is really light. It’s a huge difference from the Buell, but nothing you can’t get used to. I gotta adapt to that.”

“We made some decent runs and I’m confident going to Virginia. We’ve got enough consistency already that Tim will be able to tune the bike to me.”

Hall’s a serious racer, but he knows how to have fun, and that describes White Alligator Racing perfectly. “Already after one day, it seems like there’s gonna be good chemistry there,” said Kulungian. “You can look around and watch people and see how it’s gonna pan out. I think it’s gonna be a really good fit. He did a great job” 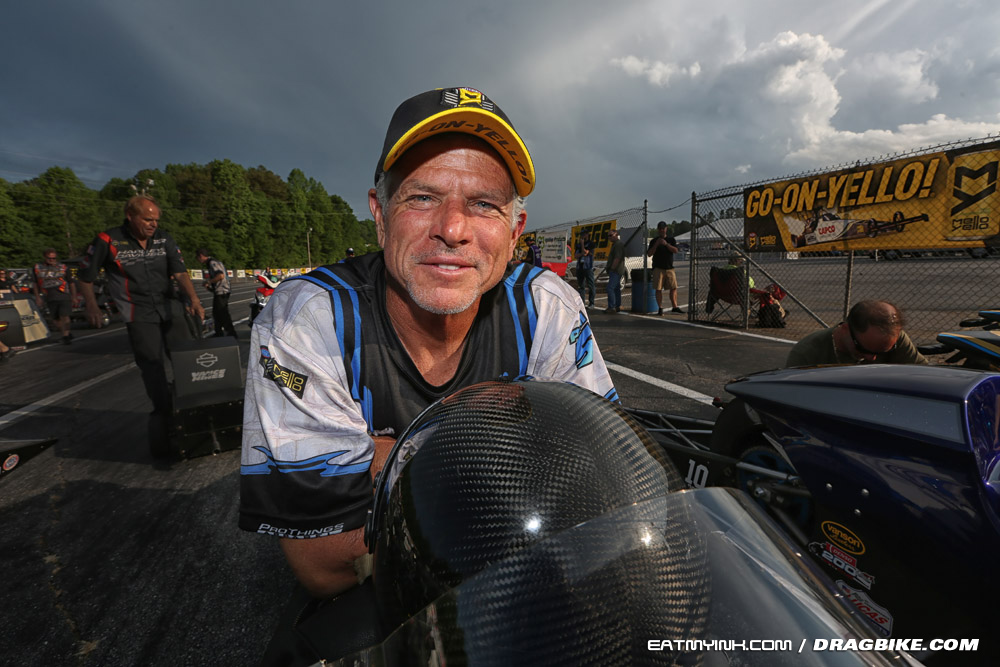 Down the road, WAR expects to have a third Suzuki under their awning soon—meaning that Savoie, Stoffer and Hall could all race the same weekend. “It’s basically the third generation of what we’ve been developing here at WAR since Jerry first acquired his equipment,” said Kulungian. “So we’re looking forward to getting that on the track and testing, which is gonna be really exciting for me and the guys. They’ve all had a lot of input into this new bike.”

But first things first, and that’s getting Hall into the Virginia field and competitive alongside teammate Karen Stoffer—a task that none take for granted but few expect to be difficult.