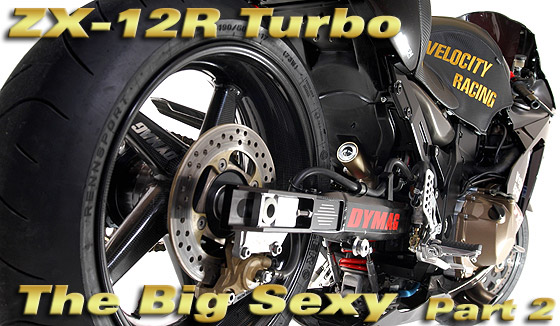 Since finishing the Velocity Turbo motor package on The Big Sexy we had to continue on our plan to make this project special. Oh sure, we could add the normal bolt-on goodies that show up on the swag train here at the super plush headquarters of Dragbike.com. But we decided we wanted to go all out on this one and do something special, (as if that turbo kit and 218 mph was not special enough)

The first thing we looked at on the list to consider was wheels. We had used magnesium Dymag’s on the last two project bikes and loved them. So this time we turned up the limit on the editors VISA card and ordered up some of their full carbon fiber 5-spoke wheels. To say these are cool would be an understatement. To say they are light would be like calling Jessica Simpson cute. In fact when we popped open the box and pulled out the rear wheel all we could do was grin. It was so light it was ridiculous. The stock rear wheel weighs more than both of the Dymags. These are just SICK. In our opinion they are about the coolest single modification you can do to a bike. The handling difference is shocking with a full 16lbs of reduction over the stock hoops. These carbons beauties can be ordered online from Charles at Street and Track Import for only $3500.

Next we turned our attention to brakes, because if you are going to make high speed passes at Maxton you better be able to slow down enough to make “the turn” at the end. We called Geoff Maloney at GP TECH Geoff hooked us up with $2133 worth (somebody better call VISA and get our credit limit raised) of AP Racing calipers, rotors and the adjustable ratio master cylinder exclusive to AP Racing. These things are way powerful compared to stock and when mated with the Galfer braided lines the total braking package is nothing short of amazing. This is the brake system that Kawasaki should have put on a bike this fast from the factory.

If you are wondering how you can ride a 300 plus horsepower bike with a stock swingarm and not wheelie all the time you are about right where we were after our first few blasts on the 12. We had seen a few sets of swingarm extensions in the past for other bikes but not the Kawasaki. We expressed our concern to noted turbo bike tuner and Velocity Racing crew member Johnny “Turbo” Dobrin and he came to the rescue. These are some of the best fitting and best engineered extensions we have seen. Not only are they adjustable, the rear axle spacer can be turned either way to adjust for shorter or longer extensions of the rear wheel as can the inner boss which holds the rear brake brace. This set up makes for a very clean installation and in many cases a casual observer will never know the bike is not fitted with a full swingarm. Since the extension is anodized black just like the factory arm it blends in very well. They retail for $350 making them a good alternative for a longer swingarm. They are currently available for most all late model bikes and the list of applications is always growing as they release new products. Call Exotic Cycle at 941-360-FAST for more information.

To complete the swingarm extension we also fitted the bike with the super strong EK ZVX530 chain. In order to accommodate the added swingarm length we selected a 150 link version. It retails for $162 at Schnitz Racing. We also used the all aluminum chain guard from Schnitz for $95. The unit not only looks great it is required for land speed racing events like the ECTA meet we intended on entering. Then we picked up some fully adjustable lowering links and a billet aluminum adjustable kickstand all from Schnitz. Lowering a bike like this is a must to get that long low look we wanted and to lower the wheelie potential at launch. Then to deal with the lower bike height we had to get the kickstand else the stocker will not work at all. The kickstand goes for $179.95 and the lowering links were an additional $124.95. Once we start browsing the parts at Schnitz it was hard to stop especially since the editor had given us a generous budget for this bike so we also grabbed a set of the mirror covers for $59.95 These really set off the front end of the bike and they clean up the aerodynamics as well, allowing the complete removal of the factory mirrors. 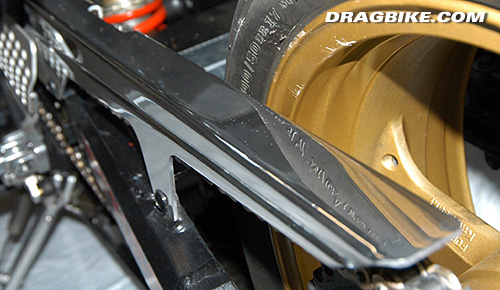 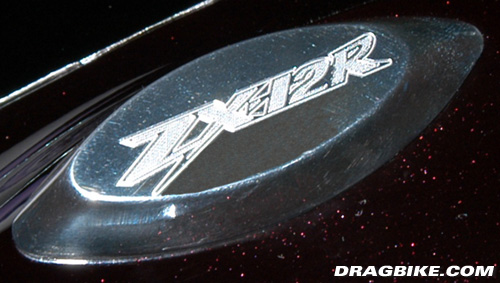 Next we wanted to make the bike look as fast as it is so we contacted Second Look and asked them to make up some custom seat covers and tank bra for the project. Since the bike had a Velocity Racing turbo kit we decided to have them embroidery the team logo on the tank bra. They have a custom seat designing service now and can make just about anything your can imagine. From complex graphics to logos and simple text second look offers you a way to customize your ride so it does not look exactly everyone else’s. For the material we selected a carbon fiber like outdoor vinyl to blend with the carbon fiber wheels. Most people will not even notice but we liked the style and the tie-in with the Dymag wheels. 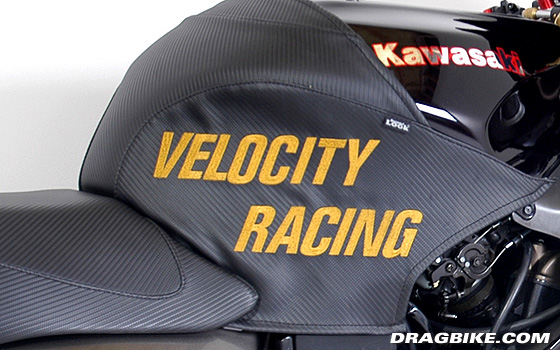 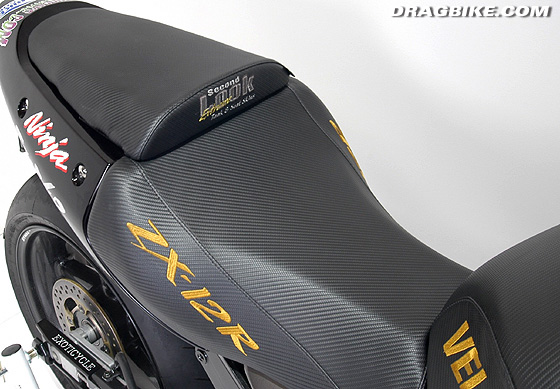 Second-Look also hooked us up with a UFO LED tail light kit. These kits upgrade your factory lens with LED lights. They are brighter and draw less juice from the electrical system. Plus they offer a wide range of flashing patterns that you can easily change with a small trunk mounted controller that comes with the kit. 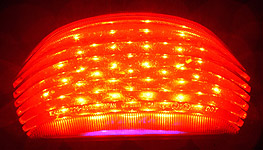 They also allow you to incorporate the turn signals into the brake light which really cleans up the back end of the bike. For $164.99 it adds a unique look and increases your visibility.

Next we wanted to change out the factory windshield and replace it with some bling-bling iridium. For this we turned to Charles at Street-n-Track Import Charles has helped out on every project I have worked on and I knew he would have something for us here too. This time was no exception. The iridium screen ($145) looks big-pimping on Big Sexy and is surprisingly durable. Even though we don’t have a lot of miles on the bike it has been in a lot of photo shoots and with all that rubbing and polishing I assumed some of the finish would have started to degrade, but it hasn’t. In fact it looks brand new.

One last little touch that you may not even notice when looking at Big Sexy is that we replaced the rear cowl bolts that looked more like those electrical knobs that stuck out of Frankenstein’s neck than bolts. We found an innovative chap that makes a much smaller and more attractive bolt for the tail section as shown below. He can be reached at speed150@aol.com and the bolts are available through him for $23.50 or at his ebay store.

When it was all said and done we spent a lot of time and money building this bike but the results are pretty impressive too. At one time it held the record as the fastest ZX-12R in the world. And frankly we feel like it could hold that record again if we had desired to twist it a little harder. It looks good, rides great and is still a good streetbike if that is your desire. Plus when riding this bike has you have the pleasure of not seeing another one just like it on every corner. It took a lot of hard work to make it happen and we owe a special thanks to everyone involved. Especially Velocity Racing in Davie Florida for not giving up when it seemed like building a record holding ZX-12 was not going to happen.